Now this is what you call a blast from the past.


Perhaps it’s a mistake to say that Command and Conquer invented the real-time-strategy genre – its developer, Westwood, had already done that with Dune 2 – but it was certainly the game that popularised it. With C&C, Westwood both simplified and sped up the wargame, creating something with the pace, the glossy visuals and the narrative hooks to snare the action-gaming crowd, but with a streamlined tactical element that still appealed to the armchair generals. C&C was straightforward, fast, violent and fun. It has become a legend that just one tactic – the classic ‘tank rush’ strategy – was enough to see you through the game, but that didn’t make it any the less enjoyable. 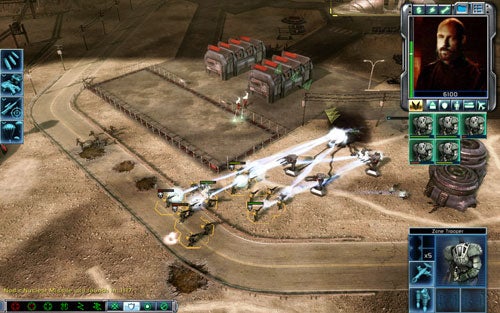 Arguably, in the years since C&C the genre it created has lost some of this appeal. The games that have followed C&C have elaborated on its basic resource management, added more complex ways of controlling and changing the behaviour of your units, put tactical maps and trading in the game, and implemented advanced systems for position, facing, cover and camouflage. The results have generally benefited gamers – just think of Dawn of War or Company of Heroes – but when faced with something as forbiddingly difficult as, say, Supreme Commander, you can’t help but wish for the good old days when you could pick up an RTS without struggling through a series of tutorials.


Command and Conquer 3 is right there with you. When playing it, you don’t so much feel that EALA has stayed stuck in the past as taken a deliberate step backwards. In many respects, this is a remake of Command and Conquer made with today’s technology. The GDI is back, the Brotherhood of NOD is back, Tiberium is back and (hurrah!) the Tank Rush is back. The graphics are sharper and more detailed, the video clips have gone HD and the AI shows distinct signs of improvement, but the core gameplay is as basic and as frenetic as it ever was. 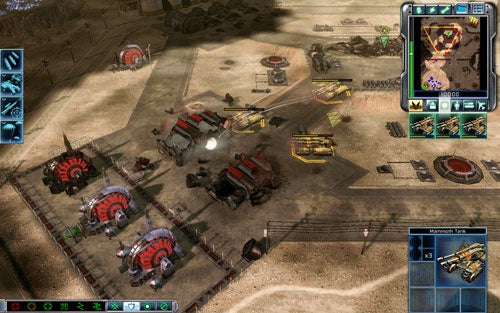 Bear this in mind if you like a complex, considered strategy game. Most of the time, Tiberium Wars barely gives you time to think, let alone plan. If you’ve played games in the series before you’ll soon find yourself base-building practically on auto-pilot, then frantically scrambling to get troops and tanks out into the field while simultaneously defending your facilities from enemy incursions There are a couple of GDI missions early on where there is barely any time to breathe, so relentless are the NOD attacks.


Of course, this means that the majority of missions follow a familiar pattern: establish your base, build your basic facilities, add defences, build advanced facilities, send out exploratory units, grab Tiberium deposits, build beefy units, then send in the tanks to crush the opposition. Tiberium Wars does occasionally play with the formula by sending you into a base under siege or kicking you off with no base at all, but it’s really just messing around. It’s soon back to business as usual. Of course, we do see the return of the classic commando mission, where your lone soldier heroically takes on entire platoons single-handed (and possibly with one hand behind his back), but if you’re looking for something new and innovative, C&C3 is the wrong place to find it. 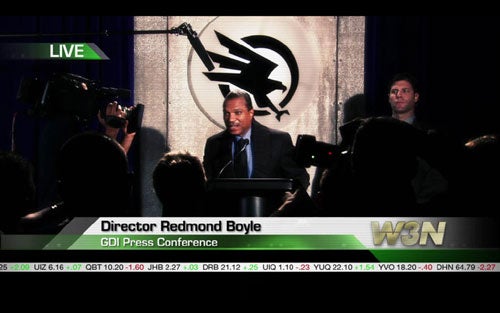 Even the game’s wild card – the inclusion of an extra-terrestrial third faction – fails to add anything truly new to the saga or the genre. The Slinn, as they’re called, are a cross between Spielberg’s War of the World’s Martians and Starcraft’s insectoid Zerg. They get some cool defensive units, like a microscopic buzzing horde that tears through enemy units in a thrice, plus some even cooler offensive units, such as huge floating battle-drones and death-ray firing uber-walkers, but there’s little they offer that isn’t analogous to something in the GDI or NOD armoury. They even sit somewhere between the two tactically, rewarding a mix between the build-then-bash tactics of the more heavily armed and armoured GDI troops and the bash first, worry later techniques employed by NOD. 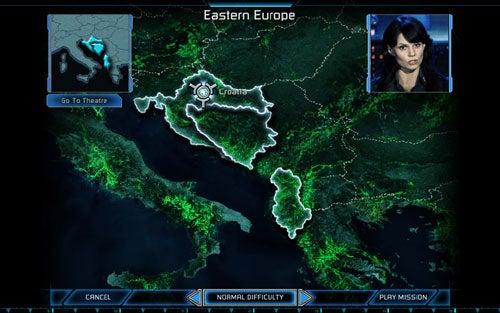 The surprising thing is that none of this really counts against the game. Some of it, I’m sure, comes down to presentation. EA has gone to town on the linking cinematics, bringing in a host of TV and movie stars in one of the finest cheese-fests in gaming history. Look, there’s Michael Ironside, trying to put a brave face on the script but looking like he would rather be doing something else. Crikey, I’m taking orders from Dr Cameron from House M.D! Blimey, couldn’t Sawyer do something better with his time off from Lost? It’s wonderful stuff, with the big names always a hairs-breadth away from collapsing in sheer disbelief while Kane (Joe Garner) chews the scenery like a guy who knows this has become his signature role, so he had better make the performance really huge. Neatly, EALA still makes all this nonsense feel like an integral part of the game by shoving video into the in-game info scenes and even the menus. It’s all bunkum, but entertaining bunkum nonetheless. In fact, you’d be hard pressed to find a slicker production than this. 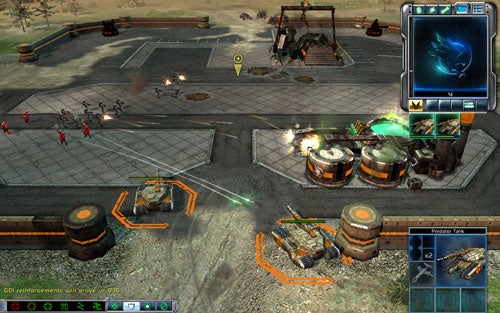 Visually and sonically, it’s all good stuff as well. Tiberium Wars isn’t quite as dazzling as Company of Heroes or Medieval II in the graphics department, but it’s up there with Rise of Legends and the best of the rest. The models, textures, effects and lighting are everything you would expect from a modern RTS. The music, meanwhile, is rocky and cinematic, in the gung-ho tradition of a Michael Bay movie. The effects are also loud and boisterous. “What is that bloody racket?” will be the response from partners, family and friends.

Most of all, though, I think C&C3’s success comes down to a killer combination of charm and nostalgia. The basic units and buildings of the GDI and NOD have, by now, imprinted themselves on gamers’ memories in a way that those of other games (with the exception of WarCraft and StarCraft) could never hope for. We don’t need to learn what the Hand of NOD does or what the Power Station looks like – most of us already know. Even units that have changed haven’t lost their charm. While the commando has a new suit and a handy jet-pack, he’s still the same lethal joker we’ve come to know and love. Other troops are destined to become firm favourites. The Zone Trooper, for example, might be vulnerable to aerial assaults, but in other respects he’s a tank on legs, capable of jet-packing behind enemy defences and using a lethal rail-gun to annihilate buildings and enemy troops alike. You have to admire those guys when they go to work. The NOD fanatics, meanwhile, are cheap walking bombs, desperate to throw themselves against high-cost units or buildings. I haven’t laughed so much since the exploding zombie in Myth…. 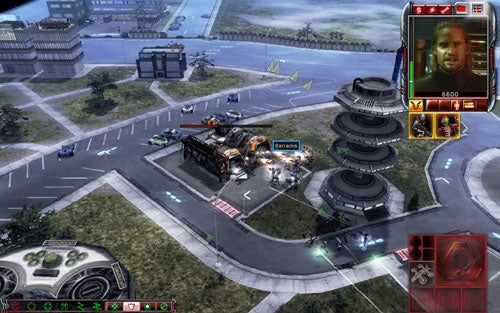 I suspect there will be some finer issues of balance in the long-term, particularly as multi-player takes off. The GDI’s super-units are incredibly tough, and the Scrinn equivalent can dish out and take a beating too. This may put NOD players in difficulties as the end-game approaches. Overall, however, the game is a fine example of streamlined design. The AI hits what will be a good place for most of us on Normal level, offering enough challenge to avoid each mission turning into a walkover, but not so much that you have to stress about every single lost unit or foolish decision. My only real quibble is to ask why, after all these years, do your highly trained troopers still feel it necessary to take short-cuts across fields of Tiberium? It’s still the most annoying way to lose a platoon. 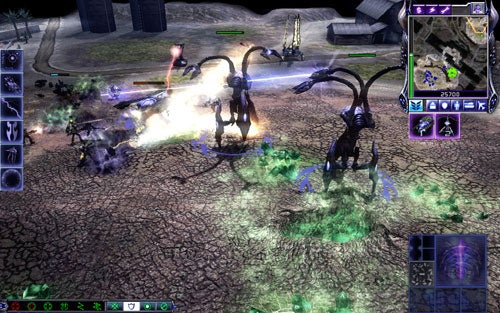 Still, I guess maybe EALA felt that was just part of the overall C&C experience (albeit a very irritating part). What can’t be denied is that while Tiberium Wars does nothing to move the RTS genre forward, it does provide fans with a game worthy of the brand, and gamers in general with one of the most fundamentally enjoyable RTS games in a long while. C&C3 is fun. It can be stupid, cheesy, ridiculous, clumsy and even a little too gung-ho for its own good, but there’s rarely a second when it’s bewildering or boring. At the end of the day, it’s in no position to challenge Company of Heroes for the best current RTS title, but maybe that isn’t the point. What is is that Tiberium Wars brings back a lot of fond memories, and will give you some new ones to boot.

A back to basics exercise, but one that does the C&C name justice. If you feel alienated by the increasing complexity of today’s RTS games, this one is guaranteed to hit the right spot.