Really, how far does a series have to drift away from its original premise before it all gets a bit ridiculous? Bar the appearance of the Scotsman’s name in the after-race placings and the fact that it’s an off-road racing game, finding elements that link DiRT to previous titles in the Colin McRae series is something of a challenge. Where have Colin and Nicky Grist disappeared to? Why has everything gone transatlantic? Why is the very first thing you hear when you start the game the voice of US pro-racer and X-games gold medallist Travis Pastrana? Do you want to play a rally game in which your co-driver addresses you as dude? 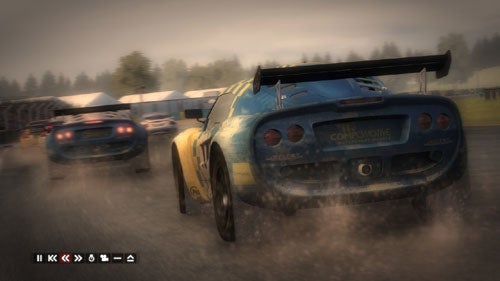 If you’re a long-time fan of the Colin McRae series and this sort of thing sets your teeth on edge, prepare yourself. It gets worse. DiRT takes it in the same sort of direction that the TOCA Race Driver series has taken TOCA, with Rally itself now only one of a range of motorsport events that includes Rallycross (eight cars on one part mud/part tarmac track), Hill-Climb, Crossover (two cars on two tracks that cross over halfway through), Rally Raid (4x4s in competitive off-road racing) and the US CORR series (dirt-track racing in trucks). In fact, throw buggy-racing into the mix and you might well note that several of these events were actually covered in the last instalment of TOCA. For some people, the fact that DiRT doesn’t stick to sensible cars and sensible sports is going to be a problem. I could cope with the massive 4x4s of Rally Raid, but when I found myself doing a hill-climb in what looks like the business end of an articulated lorry, even I started to worry about what was going on. 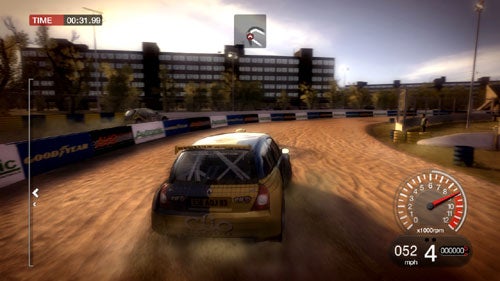 In short, if you’re a Rally purist this might be the point where you bail out. You don’t even want to know about the baffling exclusion of Scandinavia from DiRT, or discover how suspiciously arcade-like the handling model has become. Nope. You’ll just end up gnashing your teeth and wondering why Codemasters has sold the world’s best-loved Rally series down the river in obvious pursuit of the Yankee dollar. You will. I guarantee it.


If, however, you can bear this sort of change – read on. DiRT might not be the best rally game ever (I’ll leave it to the purists to argue whether it’s Rallisport Challenge 2, Richard Burns or Colin McRae 4) but if you can leave your preconceptions behind you’ll find that Codemasters has created something different, and it’s still a great racer in its own right.

Reason one is obvious: just look at all the eye candy. Visually, DiRT is everything Forza 2 isn’t. It does ludicrously lush trackside vegetation, stunningly detailed car models, artful speed blur and beautiful, warm, glowing lighting like no racer ever before. The interior views, which actually change and crumple to reflect car damage, are probably the best I’ve ever seen. Wheels don’t churn up the track as they do in Sony’s MotorStorm, but there’s certainly enough dust and mud flying around to satisfy any would-be off-roader. Look at the replays, and you’ll be astonished by the incidental detail. Watch carefully, and you can see blades of grass bend in the car’s wake. So what if all this goodness comes at the price of some very occasional slowdown or tearing? You’ll barely notice, and it never affects the playability. 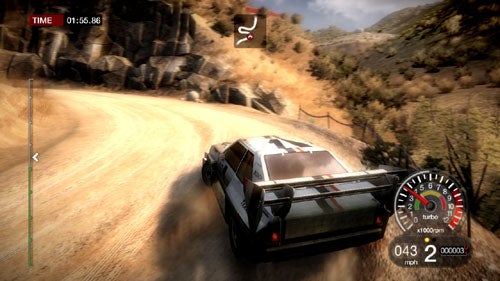 DiRT also scores big on another area where Forza 2 fell down: the courses. From British forests and moorlands to Japanese lakes and mountains, the game is almost too picturesque in its scenery, and there are some thrilling combinations of devilishly tight turns and fast narrow, undulating stretches for you to navigate at speed. In terms of sheer thrills, nothing quite matches MotorStorm’s most fearsome Monument Valley tracks, but the hill-climb up the winding, dusty trails of Pike’s Peak comes close, as does the breakneck rampage through the densely wooded Australian tracks. In the Spanish and Italian tracks it’s tempting to go off-course altogether. Wouldn’t you like to have a quick beer in that inviting hill town, or take a dip in the emerald waters lying in the distance? OK, so we’re missing the likes of Greece, Sweden and Finland, but I still can’t think of another next-gen racer – well, maybe Burnout: Revenge – that matches this one for spectacle and variety of scenery. 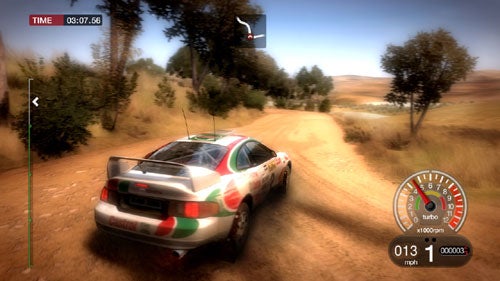 Which brings me on to the handling. Okay, okay, despite all Codemaster’s claims about their new physics engine, it isn’t what you might call ultra-realistic. After Forza 2 practically every car feels very light, and there’s still an over-arching feeling that they’re all rotating around a central point rather than resting on four separate wheels. However, it is fun. There’s a great sense of speed, and a real seat-of-the-pants feel to the racing that keeps you focussed and watching every bend and change of surface with due caution. Wet surfaces are a particular strength; the game might not do dynamic weather conditions, but race through perilous downhill S-bends on a rain-soaked Japanese mountain road and you’ll soon remember what your driving instructor told you about skidding and breaking distances. As damage, while undeniably spectacular, can be fatal to your chances of victory, you really won’t want to smack too hard into every sign, tree and barrier.

Finally, it’s also worth noting that the audio is plain superb. The between-race music is a huge improvement on Forza’s raucuous US ‘rawk’, and the engine notes and environmental noises are superbly rendered, in-car or outside.


Now, the TOCA-style approach DiRT has taken does have its strengths and weaknesses, the big strength being variety, and the big weakness being that not all events are equal. The worst events are predictably those that cater to the US love of huge vehicles – racing a massive freightliner up Pike’s Peak is not a particularly thrilling experience. However, most of the events on offer are actually pretty good. Even buggy racing, one of the low-points of last year’s TOCA Race Driver 3, is a decent laugh. 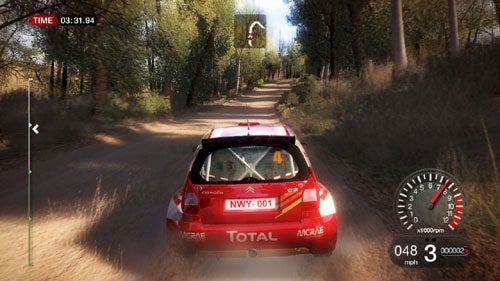 In addition, you don’t actually have to compete in every event if you don’t want to. The main career mode works through a series of tiered events. Earning points in one tier opens further events in that tier and eventually events in the tier above. Providing you do well in the events you like best, it doesn’t matter if you don’t bother or do badly in the events you dislike. Do the Rally sport events if you like and give the CORR stuff a miss – you should still be able to make progress through the game. The only factor you might want to consider is money. You need cash to buy the 46 vehicles the game has to offer, and as particular events demand a particular type of vehicle, you may need some more wherewithal before you can go through. 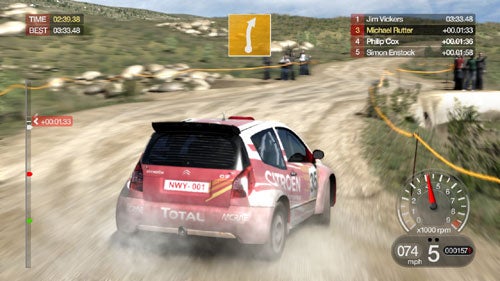 What’s more, you can even ignore the career mode should you choose and have a more traditional McRae experience in the Rally Championship mode. You can work your way through UK, European, International and Global championships, each throwing more stages in more countries your way. Still no Finland, Greece or Sweden, but you can still pretend your having an in-depth Rally experience. With so many stages to fight through, setup and damage repair become far more important than they are in the main career mode, so it’s lucky that the between-stage car setup, repair and tuning options are both comprehensive and – thanks to a handy in-game hint system – easily comprehensible.

Best of all, DiRT is a richly rewarding experience. We’re not just talking new cars and achievements, though success brings plenty of both, with a fair range of rare and classic Rally models, and new liveries to put on them. Instead, rewards come in the way the game logs and analyses your efforts, capturing every stat relating to your performance, then cheerfully reminding you of the miles you’ve driven, the feet you’ve jumped and the speeds you’ve reached while each stage loads. When the race ends, your performance is instantly uploaded to an Xbox Live scoreboard, so you and the world can see that you’re languishing behind NinjaGandalf247 nine-thousand odd positions down. This might be dispiriting, but it certainly gives you the impetus to go back and do things right. 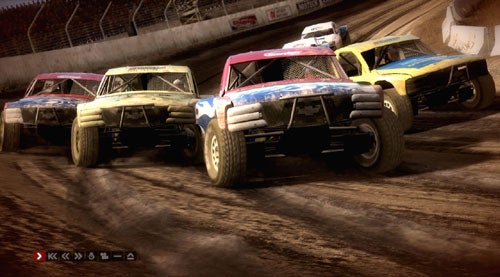 In fact, the only major false note is the online multiplayer. While several events would have lent themselves to competitive racing, you’re left with a selection of sessions where you can race the same event simultaneously with 20 or so other players and watch the results rack up in real time as you drive. It’s not totally devoid of excitement, but it does leave you feeling slightly detached from the competition.


All in all, DiRT is going to disappoint some just because it isn’t the next-gen, ultra-realistic rally sim they might have hoped for. Well, they have a point, but if you can stomach the arcade handling and the injection of American attitude, you’ll be hard pressed to find a more well-rounded and invigorating off-road racer. MotorStorm might have the edge on thrills and spills, but DiRT wins out on depth and variety. If I had to pick one racer of the last six months to keep me busy, this one – not MotorStorm or Forza 2 – would be it. 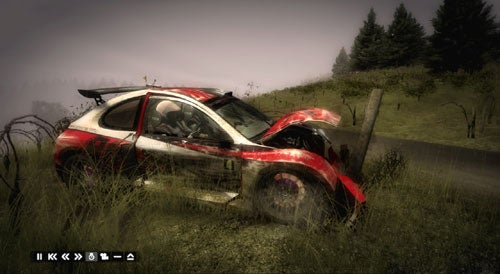 
DiRT is a clear departure from the existing McRae line – and in ways that will make some fans furious – yet it’s such a richly detailed, beautiful looking off-road racer that only the most po-faced purist won’t adore it. DiRT might be filthy, but it’s definitely fun.