The CDR 855 BT is a tiny dashboard camera from Cobra. It only offers Full HD video resolution, not the Super HD that is increasingly common. But it has a few other tricks potentially up its sleeve, and can double as an action camera. With the increasingly crowded dashboard camera market, does Cobra have enough to stand out from the crowd? Sadly, it turns out not, as most of the promised extra features failed to work during my tests.

The bundled windscreen mount is pretty standard, and as usual is designed to dangle the dashcam down from the top of your windscreen. A spacer screws into the mount, and the CDR 855 BT then slides onto this firmly. It’s not quite a quick release, but it isn’t too painful to get in and out if you want to take the camera away from the car when unattended.

I had a few issues getting the Cobra CDR 855 BT to stay attached to the windscreen on one of my test vehicles, however. After about the fourth attempt it seemed secure, but the suction cup is quite small and I’ve had similar issues with the Xiaomi Yi Car WiFi DVR, which also has a small cup. A more effective suction mount would have been an improvement for both these products. 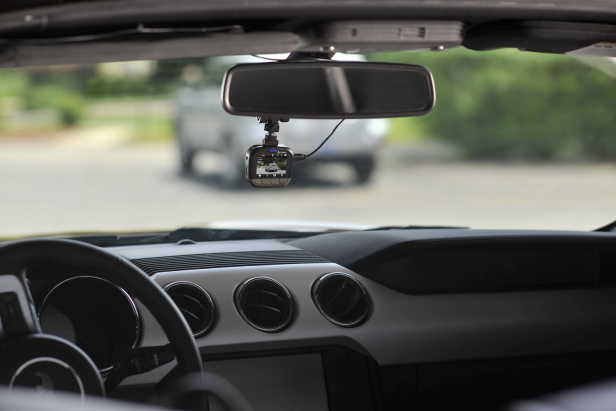 You don’t get a power adapter that will allow you to plug in your sat-nav as well, but at least the cable and plug are separate, with a standard USB connection between the two. There are two USB cables in the box – a long one for your car, and a shorter one for when you want to hook the device up to your computer to download footage. The long one only supplies power, and won’t work for data.

Cobra specifies the CDR 855 BT’s sensor at 2-megapixels, although it doesn’t state the size. This is just enough pixels for the Full HD (1,920 x 1,080) resolution that is the maximum shooting frame size, but you can also choose 720p at 30 or 60 frames per second. As stated at the beginning of this review, though, there’s no Super HD option.

Video is recorded at about 11Mbits/sec in Full HD, so 8GB of Flash memory will be enough for around 100 minutes of footage. Cobra actually throws an 8GB MicroSD card in with the bundle, and since loop recording is available, this may be all you need. Video files are recorded in a standard MOV format. You can also use the CDR 855 BT to take snapshots, using one of the four buttons on the rear. 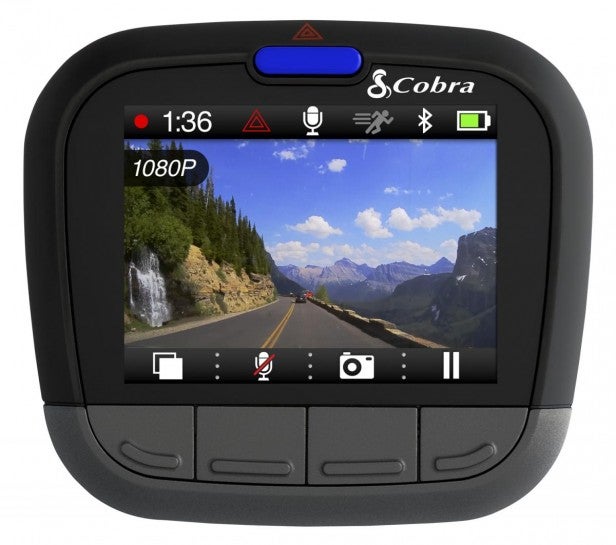 Although Cobra touts the CDR 855 BT as an action camera stand-in, thanks to the 30-minute battery life, there are no enthusiast settings such as control over white balance or exposure. In fact, other than the resolution options, there’s nothing else you can do to alter the way footage is recorded. The mount uses a standard screw fitting, so you could use a tripod or other attachment method. But the location of the mount on the top of the device will probably mean shooting footage upside down, and there’s no menu option to flip the image.

To aid the CDR 855 BT’s utility as an evidence-producing device, it is possible to capture your location alongside the video. However, this doesn’t use a built-in GPS. Instead, it’s necessary to download the Cobra iRadar application for your smartphone and connect the CDR 855 BT via Bluetooth. The dashcam will then obtain its location from your smartphone’s GPS. The iRadar app is available for iOS and Android, so if you’re a Windows Phone user you’re out of luck. iRadar can also connect to a radar detection device.

Although the lack of a built-in GPS is a drawback compared to lots of dashcams, the iRadar smartphone app potentially brings with it some additional benefits. Via iRadar, the CDR 855 BT is intended to provide alerts for when you’re approaching traffic lights, speed cameras, and areas of risk. This requires a subscription. There’s a 30-day trial available to try things out, after which a year costs £22.99.

Unfortunately, I found the locations provided by my iPhone 6 Plus weren’t attached accurately to the video files, so they were shown in the wrong place on the map. I also didn’t see the warnings that were popping up on the smartphone screen from iRadar appearing on the CDR 855 BT. It’s possible that you’re meant to have your phone on a stand, powered up, mounted on your windscreen. But the CDR 855 BT manual doesn’t mention anything about this.

The CDR 855 BT is also another dashcam that can save you money on your car insurance. A partnership with Adrian Flux potentially offers up to 15% off new insurance premiums, with proof or purchase.

The lack of Super HD means the CDR 855 BT doesn’t quite have the detail of some current dashcams. But performance is still decent, with the ability to pick out road signs and number plates possible. Footage does have signs of compression artefacts, and colours aren’t perfect either, although this isn’t so important for a dashcam anyway.

A sample of the video shot during day time can be found here.

A sample of the video shot during evening can be found here.

Cobra makes some bold statements about how well the CDR 855 BT does outside daylight hours, claiming “great performance from dusk till dawn”. I included some evening journeys in my testing, and whilst I wasn’t blown away by the results, it was better than a lot of dashcams I’ve tested. There was noticeable grain, but this didn’t render number plates of nearby cars illegible. 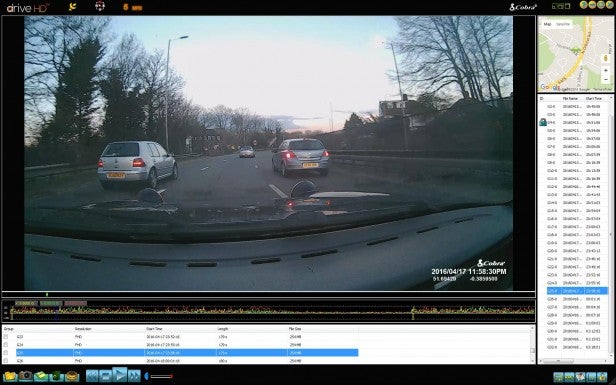 There’s no desktop software included in the CDR 855 BT’s box. Instead, you have to take a trip to the Cobra website to download this. The software has the usual facilities to play video files with the G-sensor and GPS information, with the latter only available if you have set up the iRadar smartphone app as described above. There are a few extras, though, such as the ability to export the route taken as a KML file.

The Cobra CDR 855 BT is a decent dashboard camera in terms of image quality, despite the lack of Super HD resolution. However, the windscreen suction mount could do with improving, and the lack of a built-in GPS makes location recording a bit fiddly. This is particularly compounded by the fact that the Bluetooth-connected iRadar smartphone app doesn’t provide accurate location data, or the promised alerts. Overall, without the iRadar functionality operating as advertised, this is a fairly standard dashcam.