The Cleer Audio Ally Plus are one of the best sets of true-wireless earbuds under £200. They offer wonderfully balanced audio, good battery life and all the bells and whistles you'd expect from a premium pair of true wireless earbuds

The Cleer Audio Ally Plus are a pair of true wireless earbuds with lofty ambitions.

The Ally Plus have designs on toppling the likes of the Sony WF-1000XM3, Sennheiser Momentum True Wireless 2 and Apple Airpods Pro, by offering users cutting edge specs and features at a competitive price.

But with so many others like the Amps Air Plus and Samsung Galaxy Buds Plus having tried, you may justifiably scoff at Cleer Audio’s goals.

If you do, you’ll miss out. Make no mistake, the Ally Plus are one of the best earbuds under £200, and a perfect choice for any music fan looking to cut the cord and enjoy the benefits of true-wireless listening.

The only downside is that a lack of wing tips options and unergonomic shape make them a poor choice for runners and gym-goers.

The Cleer Audio Ally Plus have a much more flamboyant design than most of their rivals – which are generally feature functional, but not terribly interesting monotone aesthetics.

The pebble-shaped rectangular case has a clear top that lets you see the notification lights, making it quick and easy to see when they’re charging or running out of juice. Round the back, you’ll see a USB-C charger.

The circular buds also have metallic accents around their sides and noticeable protruding bumps on the bottom which house their internal mics. The design is reminiscent of the Bang and Olufsen E8 3.0, just without the leather stylings. 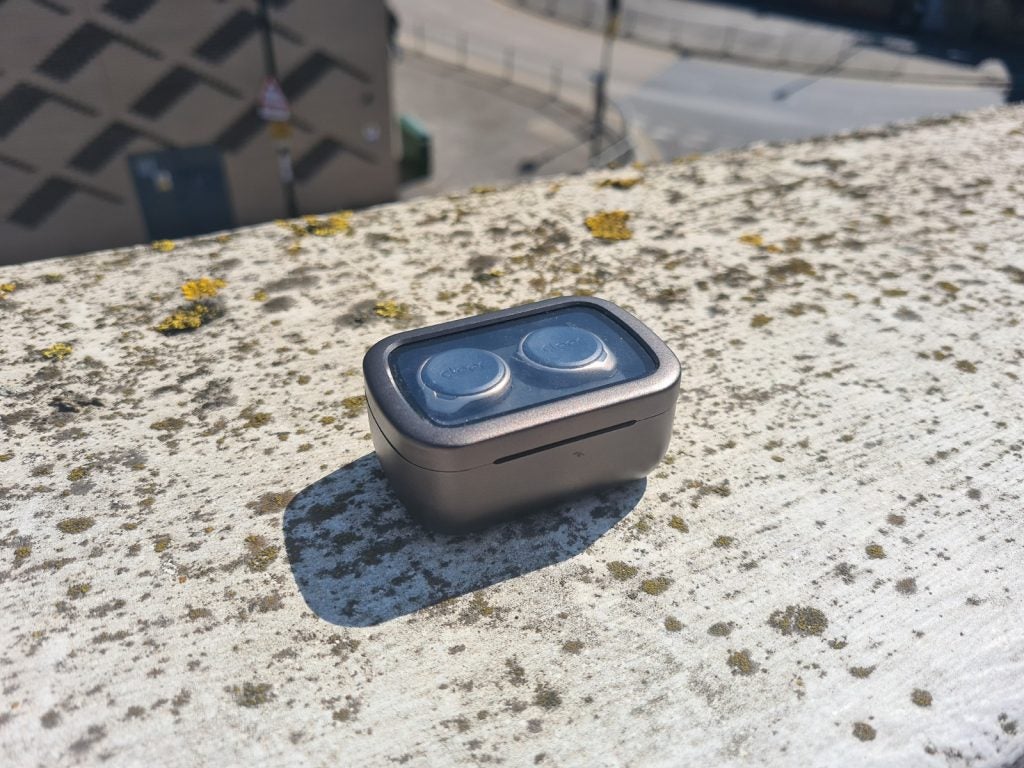 I personally would have liked an all black option, but the design is generally excellent and ticks the right boxes for functionality.

The case, though noticeably thicker than competing sets, comes with 20 hours of charge. Coupled with the main buds quoted 10 hour listening time, that means the Ally Plus are around par for the course when it comes to premium wireless earbuds, outside of the much cheaper EOZ Air and Lypertek Tevi.

With testing I found the battery life to be excellent, and the Ally Plus easily lasted multiple weeks use off a single charge without requiring a connection to the mains, even when using ANC (active noise cancellation).

The ANC performance is also surprisingly capable and easily outguns the performance of the Amps Air Plus. For non-tech heads, ANC refers to active noise cancellation and uses the earbuds’ microphones to block out any background noise. 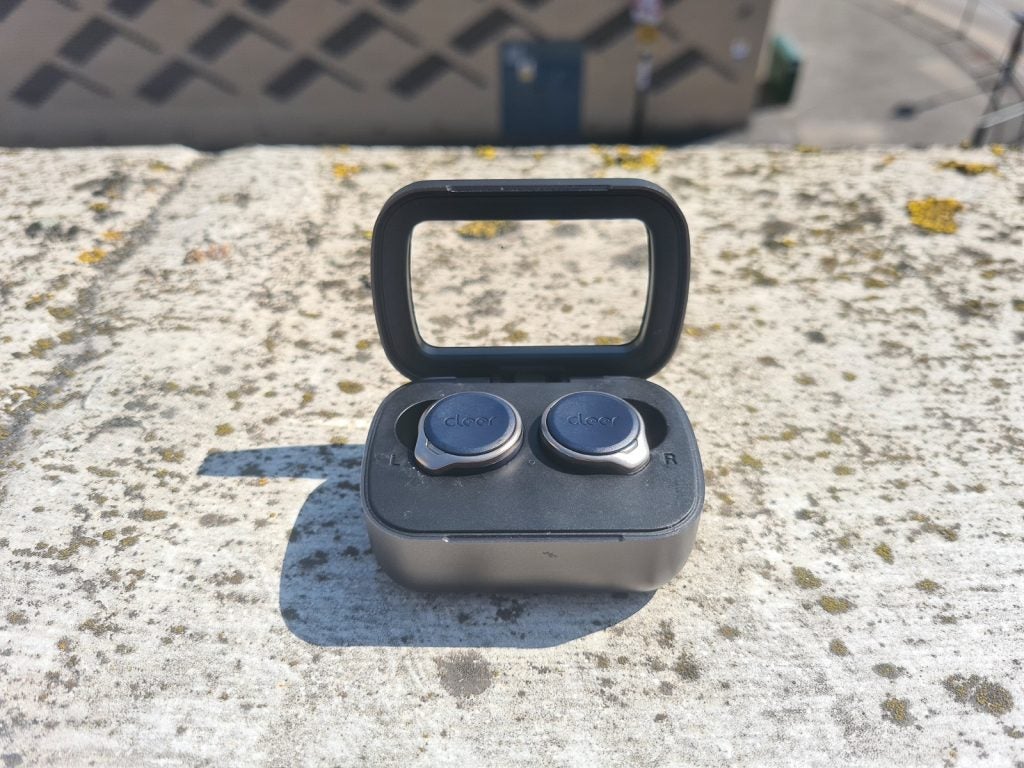 The ANC isn’t as powerful as the Sony WF-1000XM3, which remain best in class. But it’s more than good enough to block out the hustle and bustle of a train and the road outside my flat that the Amps Air’s ANC was ineffective against. The only downside is that the ANC does have trouble with windy conditions, which is something that affects nearly all the headphones we test.

Thankfully, the onboard capacitive controls make it quick and easy to switch ANC off or switch to the included ambient mode with a couple of taps.

The Ally Plus beamforming and Adaptable Digital Noise Cancellation means the microphones are powerful enough to take and make calls. I was able to answer incoming calls and remain audible in everything but horrendous rain. This is something I couldn’t say about either the Amps Air or Galaxy Buds Plus. 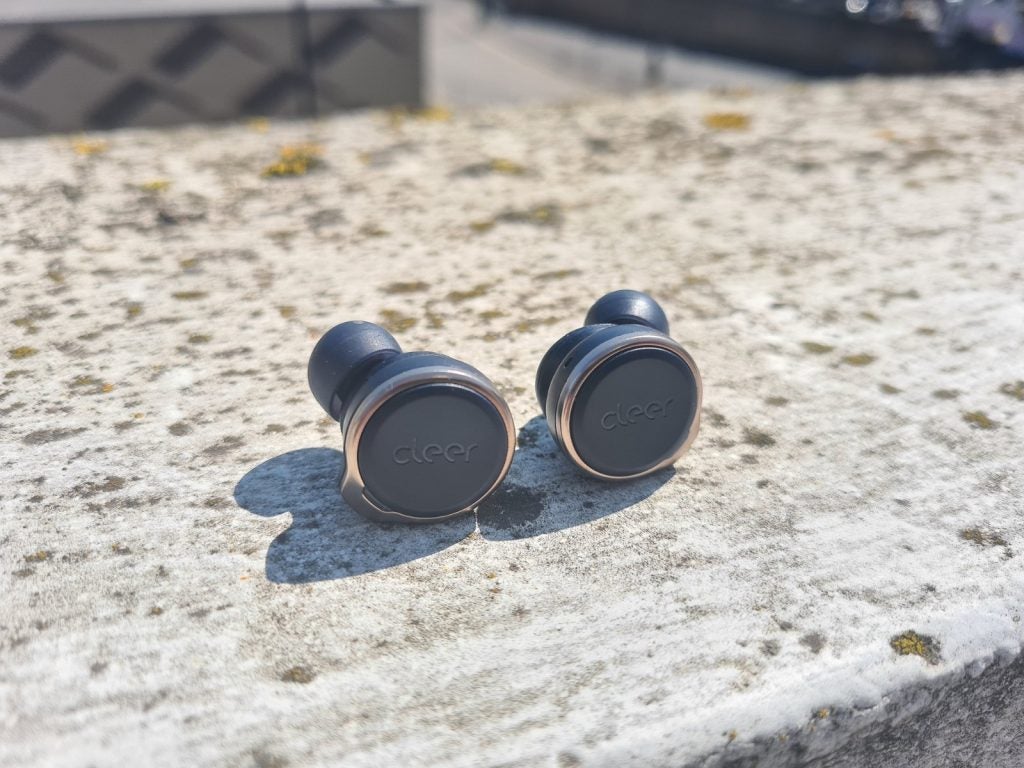 My only qualm is that by packing quite so many features into the buds, they’re rather chunky. The included silicone ear tip options are varied enough for a comfortable fit and solid seal. But the earbuds’ large, circular shape and lack of wing tip options mean gym users will be better off looking elsewhere.

Going for a run, I found the buds move and require re-seating fairly regularly. Working a bag, they all but flew out of my ears. If you want a set for the gym, we’d recommend going for an alternative set with fitness in mind, such as the Jaybird Vista or Jabra Elite 75T.

It’s a shame as the Ally Plus meet IPX4 water resistance certification standards and are otherwise fit for purpose for running or gym work.

Sound quality — The Ally Plus is a well-balanced performer

Thankfully the Cleer Audio Ally Plus makes up for this shortcoming by offering stellar audio quality.

I wouldn’t say they beat the Sony WF-1000XM3 as the best all-round wireless earbuds, but they certainly put in a stirring effort.

The key words I would use to describe the sound is balanced and controlled. There are some wireless earbuds under £200 that are susceptible to a few issues. The first is to exaggerate the lower end of the frequency range, creating an unbalanced sound where flabby bass destroys detail.

The second is to sacrifice tonal control for volume. The Amps Air and Galaxy Buds Plus both fall prey to this by enticing listeners with ear-splittingly loud volumes at the expense of control. This is why highs can suffer from sibilance, and the mid-range can sound nasally.

The Ally Plus don’t fall into either of these pitfalls, with a sound profile that works on everything from classical music to Djent progressive metal.

The 10mm Neodymium drivers offer a surprisingly tight low end. Textured post-rock arrangements had wonderful precision with the low end remaining suitably removed from the swooping guitar parts and string sections. The same was true when listening to bass-heavy blues. Here, the walking bassline maintained a pleasing tightness while rumbling along with suitable power to get my feet tapping. 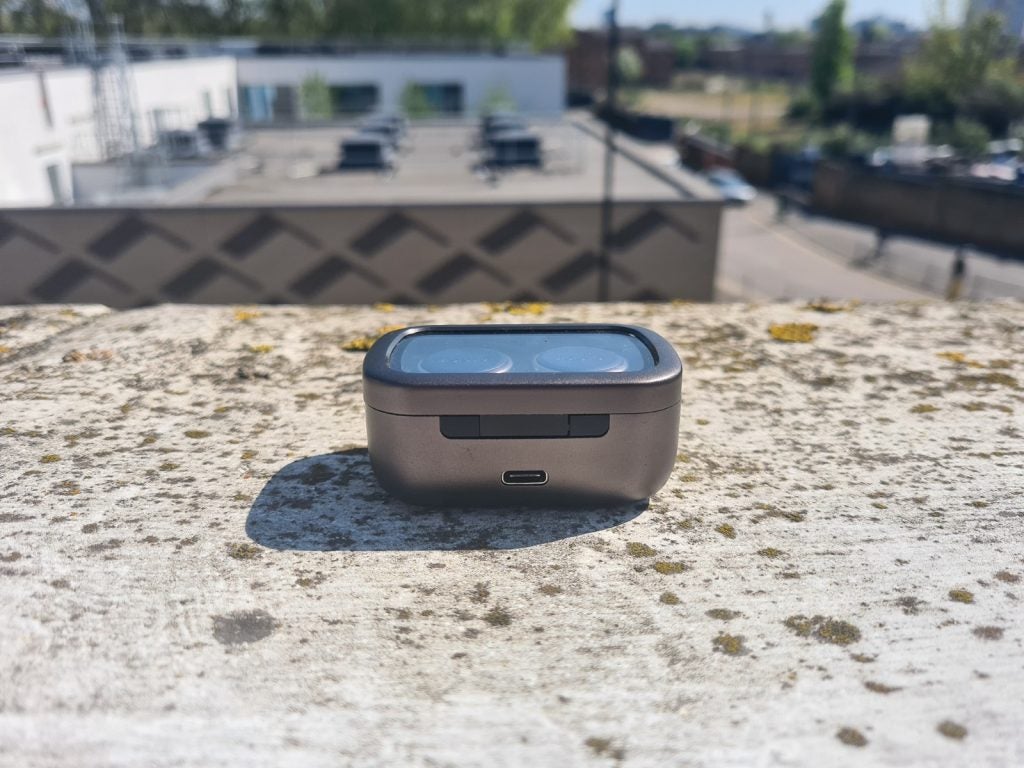 Tonal balance is also, for the most part, excellent. Listening to classical music, every part of the orchestra had its defined place in the soundstage. As always, overall quality and dynamism is compromised by the limitations of an in-ear form factor. But there aren’t many better for less than £200.

Support for aptX and Google Fast Pair 2.0 are two welcome additions, the latter helps to further differentiate the Ally Plus from the competition. AptX is a codec that supports CD-quality music over Bluetooth. Fast Pair 2.0 is a rarer and newer piece of tech not on other true-wireless sets. It allows the Ally Plus to scan the environment and ping a connection request to nearby Android devices, making it easier to connect.

Connection stability is also fairly good. Testing them both indoors and out, I haven’t experienced any serious dropouts. Though given the current Coronavirus lockdown I haven’t had a chance to test performance in busy signal areas like Waterloo and Kings Cross station. I’ll update this review once I’ve had a chance to test them in normal outdoor conditions.

Should you buy the Cleer Audio Ally Plus?

This, plus their wonderfully controlled audio performance, make them one of the best sets for less than £200. The only downside is that their circular design and lack of wing tips mean they don’t provide a solid enough fit for runners and serious gym-goers.