If you follow the gossip columns or regularly have the misfortune to discover a copy of Heat lurking inconspicuously around the house, you may be aware of the concept of combined celebrity. For example, Brad Pitt and Angelina Jolie are both individually – to use the right phrase – ‘hot’. Combine them into a package and you get Brangelina, and the combined ‘brand’ becomes many times ‘hotter.’ The same doesn’t quite apply with TomKat (Tom Cruise and Katie Holmes), and it never really did with Beniffer (Ben Affleck and Jennifer Lopez), but you probably get the picture. Basically, one star might be good, but two stars is a whole lot better. 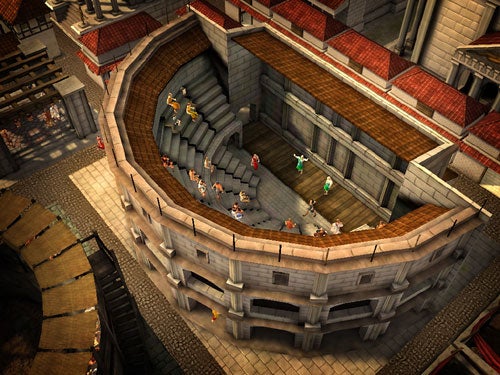 So you can see the thinking behind CivCity: Rome. Sadly, it’s not quite the Civilization meets Sim City coupling we’ve all been waiting for, merely a city building sim brought to you by Firefly, the team behind Stronghold, with assistance from Firaxis, the men behind Civ. And to be honest, you can even take the Civ angle with a pinch of salt. There are clear influences that have transferred over – research, wonders, citizen happiness, trade routes and caravans – but the core gameplay will be more familiar if you’ve played the Caesar series or Zeus: Master of Olympus than it will be if you’ve just played Civilizations I to IV. In other words, this is a game of building homes, producing and harvesting resources, developing civic amenities and keeping the populace healthy, wealthy and happy, not one of diplomacy, conflict, or historical development, a la Civ. 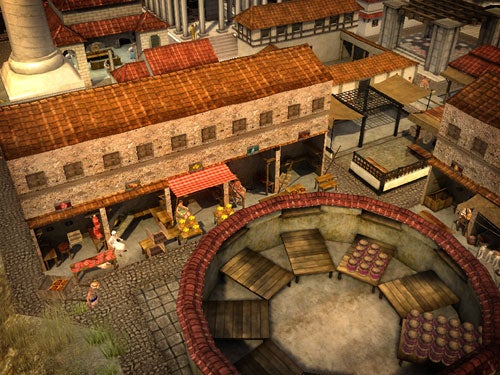 In practice, CivCity: Rome is governed by two metrics: money and happiness. You grow the latter by keeping wages up and unemployment low, making sure your citizens have ample leisure time, and ensuring there’s enough food and housing to go around. Of course, doing so requires building, and that takes cash, which you can earn through a combination of trade and taxes. As the only way to earn higher taxes is through cultivating the wealth of your citizens, as measured by the size and quality of their housing, this is probably your biggest single task in the game.


I know. How hard can housing upgrades be? Well, for a start you can’t simply upgrade them. Instead, houses develop from one stage to the next through the provision of nearby amenities – water, food, oil, clothes, religion, baths, bread, entertainment and the rest. For added trickiness, all these amenities have to be within a certain range of the house, and that range is surprisingly limited – how these guys founded a great empire when they can’t be bothered with five minutes’ walk to a temple is beyond me. 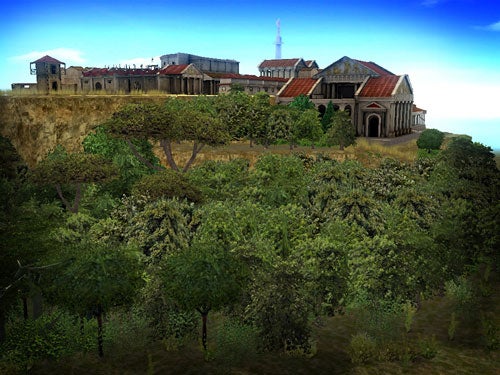 As a result, city planning in the early stage of each mission is essential because you need to leave room for amenities that will only become available later. Even then, you’re almost certain to need to relocate some agricultural facilities further out of town in order to make room for new urban amenities. It’s annoying, but it actually makes sense, as this is one of the ways in which real cities historically develop. After all, there aren’t many farms within the M25. In fact, as housing develops and you reach key upgrade points, even the dwellings have to move. It isn’t long before you’re building new urban centres or the Roman equivalent of Millionaire’s Row. 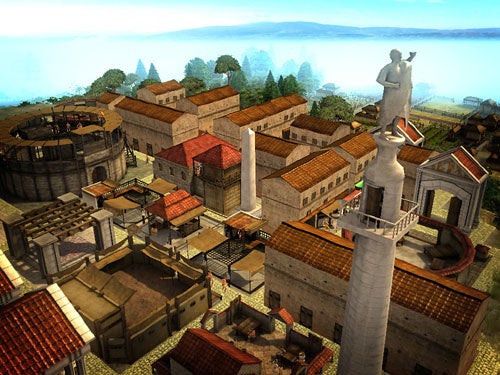 With some money rolling in from the rich, you can then afford to build markets and ports for purposes of trade. In fact, even in relatively early missions you’ll need to sell products to raise revenue to afford mission-critical amenities, or buy products in (usually wheat) to build a bakery so that your citizens can rise up the property ladder. This in itself sounds a slightly false note – surely if your land supports olives, flax and grapevines, it could manage a little corn or wheat? However, the trade system is simple, sensible and doesn’t take up too much of your time, and the only slightly annoying thing about it is that some missions make you pay to open up a trade route. Just when you’re most desperate for money, the best way of earning it always seems to be 500 Denari out of reach! 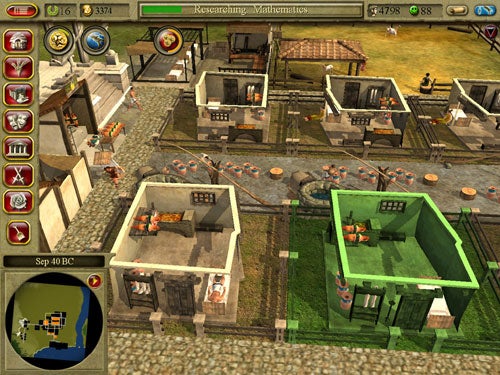 Still, the best thing about CivCity: Rome isn’t the building, the trading or even the lengthy campaign. It’s not even the missions themselves, which hold true to the classic ‘gather 30 this, build five of that and reach a population of 5,000’ formula. No, the best thing about CivCity: Rome is the detailed way in which it depicts your citizen’s daily lives. You can watch the goats being slaughtered, the carcass being picked up by the butcher, and the meat being chopped, prepared and then delivered to the granary. You can follow the progress of stone from quarry to storehouse to shipyard, where it’s hoisted on to a waiting ship to be traded overseas. The approach even extends to your people, who can be seen in their leisure time visiting the temple, picking up goods or taking a bath. Hover over a house, and you can even see the little Romans snoozing inside. 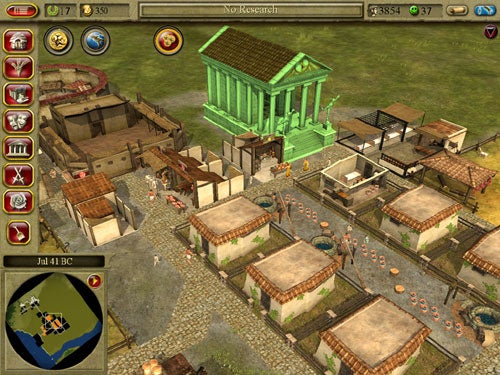 And the graphics engine that powers this is reasonably adept – or at least it is once you work your way through a useless pre-game options screen that has a horrible tendency to reset the detail levels when you change the resolution, and vice versa. With everything maxed out there are some nice glowing light and real-time shadow effects, and though none of the models are particularly impressive, seeing the whole thing in motion gives a rich flavour of Roman life without slowing the frame rate to a crawl. Maybe CivCity: Rome isn’t as pretty to look at as Battle for Middle Earth 2 or Black and White 2, but it’s a much more attractive option than any other ancient city-builder out there. 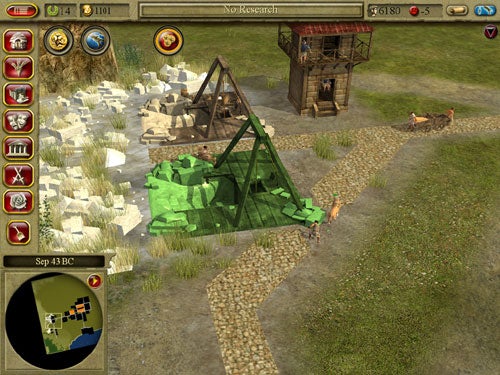 Sadly, the game’s major problem is that it doesn’t feel much updated in other ways, and – to be more specific – it doesn’t maximise the potential of the classic Civ approach. The ‘property ladder’ mechanism is nice, but there’s little real sense of your city developing on a technological or cultural level, mostly because improvements and buildings are just handed out as the campaign develops, rather than being tied into a research tree. Instead, research just doles out specific enhancements – more meat, higher taxes – or adds to your city’s prestige. The same applies to Wonders, which seem only loosely tied into the gameplay. Most of all, there’s no feeling that you’re tied into the wider Roman world. True, the briefings at the start of each mission only pay lip service to providing context, and reports come in during the game that affect your citizens’ morale, but rarely do you feel that your city is a vital cog in the Empire’s machinery. In focussing down on one specific, CivCity: Rome seems to have lost touch with Civilization’s wider themes. 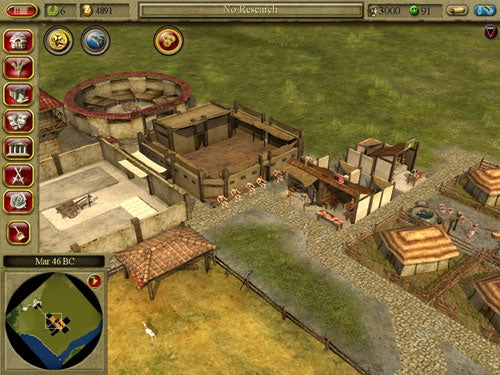 More seriously, the limited military options are all but useless. Early on, the game gives you the option of sticking with peaceful missions or tackling tougher missions close to enemy territory. Given the first choice, your city is unlikely to face any more serious threat than fire or wild animals, both of which can be dealt with through the provision of specific watchtowers. Military missions, however, mean that you’re under regular attack from hostile forces, and your only defence is to build a fort. Sadly, the legions that then populate that fort are incredibly dumb and unresponsive – a fact made worse by fiddly controls and weak buildings that are all too susceptible to enemy attack. Too many times, an expensive temple or dock can be brought down in seconds while you try to mobilise the BC version of the Keystone Cops into action. Not since Black and White 2 have armed forces been so pitifully dopey. In fact, the best strategy seems to be to just leave your men standing at the point where the enemy continually appears, so they can mop them up as and when necessary. Now, I know CivCity: Rome doesn’t pretend to be Rome: Total War, but surely this could at least have been dealt with competently. 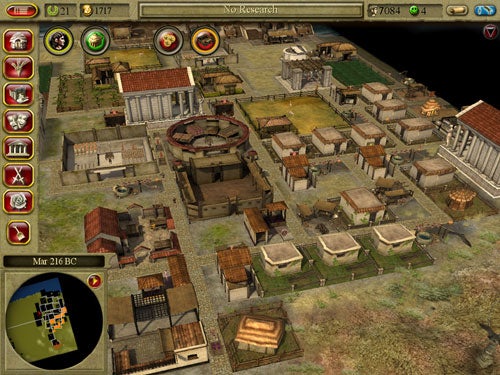 Finally, I can’t help feeling that the game is too stingy with the exciting stuff early on. Getting this right is always difficult for any developer – give the player too much to play with to begin with, and they either can’t learn the basics, or they don’t feel sufficiently rewarded later on. However, if I’m playing a Roman city builder, I don’t want to spend the first six hours acting like a provincial flunky in charge of a village or small town – I want to get the gladiators, build wonders, and see the Coliseum. Come on, chaps, a little spectacle in the early states wouldn’t go amiss. 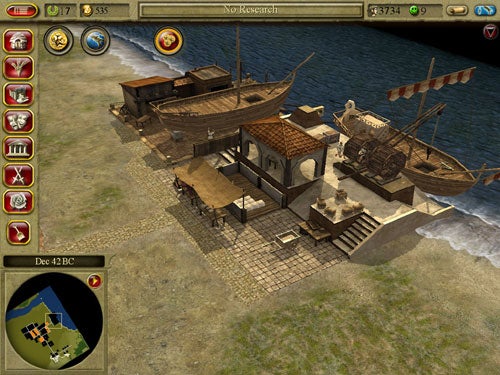 You see, this seems endemic of CivCity: Rome’s problems – it just doesn’t try hard enough to get you excited in the short-term or grip you in the long-term. Instead, it settles for being a fun and engaging city builder with a nice modern look; the sort of game that earns such hackneyed phrases as “if you like the genre, you’ll like this”. And like it you will, but like, not love. It’s not the Brangelina of PC strategy games, nor the Jordan and Peter Andre, but something that sits squarely in-between. Anyone wanting something more than an amiable city builder would probably be better off waiting for the upcoming Caesar IV.


The CivCity coupling is a brilliant idea, but the offspring doesn’t quite live up to that potential. It’s a decent, good looking city-building game, but not the stuff empires are made of.