With a few trendsetting exceptions (like the original Apple iPhone), technology evolves to keep up with consumer demand. Where multimedia content is concerned, these demands are pretty high: the discerning techie these days wants a device that can stream all kinds of content throughout the house from central storage without needing to turn on a PC. Linksys feels it might have the answer with its new Media Hub NMH405, offering NAS functionality, RAID SATA storage and a memory card reader, multimedia playback and a colour LCD screen. 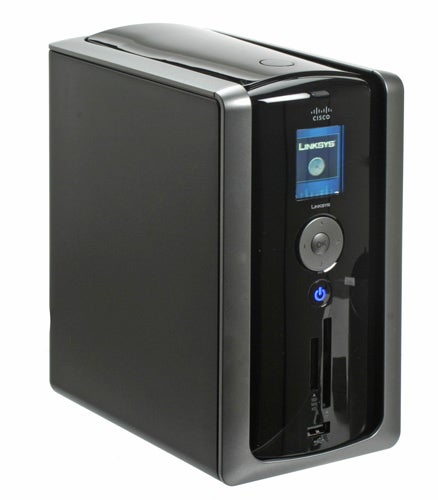 Linksys (a division of Cisco) has made its Media Hub available in several different versions. The cheaper 300 series come without the LCD display or memory card reader and include a ‘bare’ model without pre-installed drive. This makes a lot of sense, especially since the biggest drive any of the Media Hubs come with is 1TB (1,000GB) – enough for most needs, but others may disagree.


Unfortunately, you can’t get the high-end 400 series without a preinstalled drive, so your choices are limited to the 500GB NMH405 (the model under review here) or 1TB NMH410, both of which come with quiet and thrifty Western Digital Green hard drives. However, since all the Media Hubs are dual-bay you can always add an extra 3.5in drive, bringing the maximum capacity up to a more respectable 2TB in RAID1 (the only available RAID configuration on the Media Hubs, giving you 1TB of ‘mirrored’ storage) or full 3TB in unsecure JBOD. 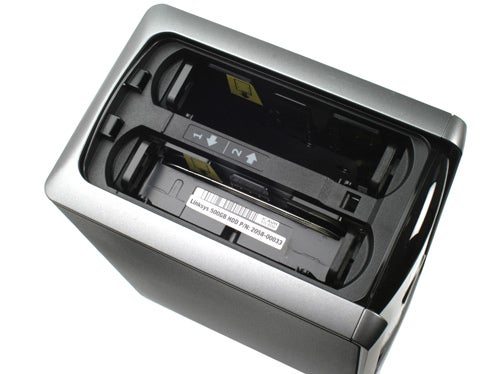 Though drives aren’t hot-swappable, installing and replacing them is easy. The NMH405’s top comes off with a single press of a button, after which you can simply slide out the plastic drive trays. HDDs need to be attached using four screws and Linksys has been thoughtful enough to provide pre-mounted rubber grommets to reduce noise and vibration. Despite the small 60mm fan at the back, the Media Hub is very quiet indeed during operation and stays nicely cool even after hours of use. 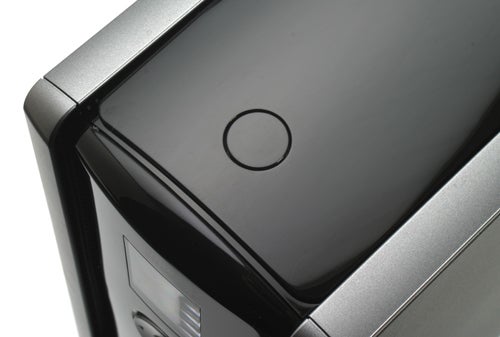 Linksys’ Media Hub is fairly attractive too, though its looks don’t quite live up to the £250 price tag. It measures a compact 198 x 111 x 168mm and is relatively light at 2.1kg with a single hard drive installed. Build quality is solid, with no sign of flex, creak or give in the plastic outer chassis surrounding the inner metal frame.


Most of the case is a sensible matte black, with a slightly-recessed piano-black section containing the top HDD-access panel, front connections and controls plus the screen. When turned on, the power button is nicely backlit in blue.

In terms of external connectivity, about the only thing missing is eSATA – by no means a common connection on NAS devices at this price point. There are two USB ports, one at the back and one at the front, and a memory-card reader that will take CF, MS, SD/SDHC, xD and MMC, while the Ethernet port is thankfully of the Gigabit variety. 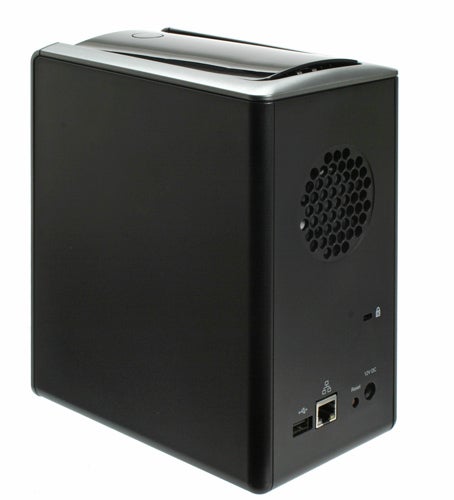 Despite its 176 x 220 resolution, the 1.8in 64,000-colour LCD screen is nice and sharp, and excellent viewing angles mean it’s just as visible from the side as the front. However, though it does offer a few handy features, generally its use is somewhat limited.


Most of the time it shows the Hub’s status, though when importing from external media it will show progress as a percentage, information that’s oddly not made available on your main monitor through the browser-based interface (where all you get is a progress bar). It’s almost as if Linksys is forcing you to look at the Hub’s display just to remind you of why you spent the extra £40 for it and the memory-card reader. 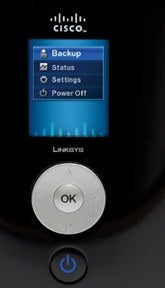 To be fair, using the four-way d-pad and central OK button below the screen you can also access certain functionality and information without needing to turn on a PC at all. You can choose to backup various connected devices and check the usage or remaining capacity of your drives with colour pie-charts to illustrate it. Still, if we were just talking about the LCD screen we’d say the price difference with the 300-series isn’t worth it, but the addition of a card reader just about tips the balance.


Installation of Linksys’ Media Hub is as simple as it gets. After inserting the included DVD, you’re walked through the entire process step by step. Merely hook the Media Hub up to the same network or router as the PCs you want to install it on, and after entering an administrator password, device name and choosing what drive letter you want Windows to map it to, you’re all set. 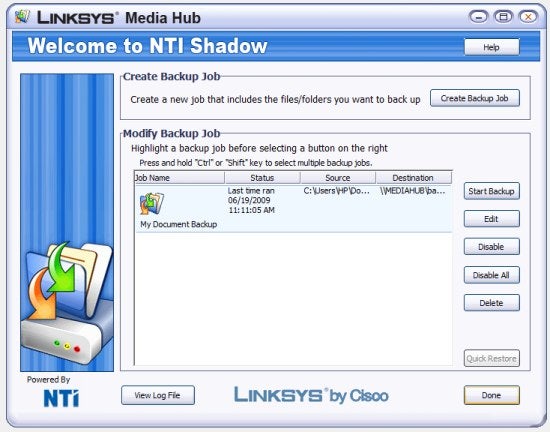 This is also where you’ll be asked if you want to install NTI’s ShadowTool, a handy backup program that comes with the unit and is preconfigured to backup the contents of your Documents folder every hour – though of course you can set it up to backup any files or folders at your convenience.


Last of all, the installer asks if you want to perform an initial scan, where it can search for compatible media in any number of locations to add to the Hub’s library. This brings us to the main feature that supposedly sets the Media Hub apart from a ‘normal’ NAS box: the browser-based media interface. To run this you’ll need either Windows Vista or XP and at minimum Firefox 2 or Internet Explorer 6.

The interface is quick, intuitive and very nicely presented. The Home page, to which you can return from any other page by clicking the house icon, contains large category icons for Music, Photos, Videos and a File Browser. Within each of the aforementioned categories are extensive cataloguing options – music, for example, can be arranged according to Album, Artist, Recent, Song or alphabetical letter, and you can choose to have files displayed as text titles or with album art. The software is also quite good at aggregating content into the library from different physical locations. 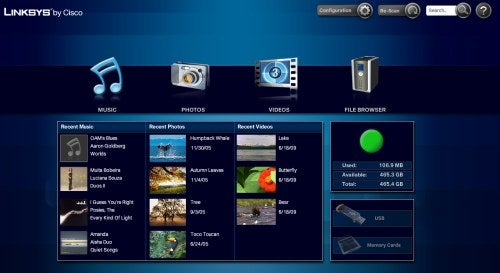 However, the one area where the web-interface starts to fail is when it comes to actually playing back media, especially video. The problem is that the Media Hub’s vaunted media interface is no more than that: an interface. It can’t actually play back media itself and instead relies on players already installed on your computer.


Hence it uses Windows Media Player for most formats and Apple QuickTime for .MOVs. Aside from crashing a few times (which didn’t affect other browser windows), this worked well enough, but begs the question: why not just use the relevant programs in the first place? Or better yet, get a free media player that will play every format (including MKV) like Media Player Classic or VLC. 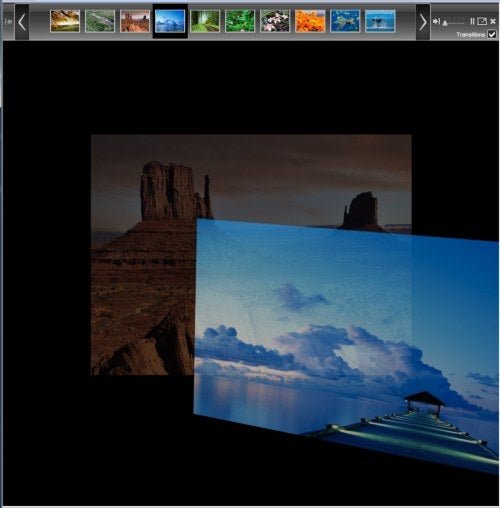 Essentially, there is no real reason for the Linksys’ media interface to exist, at least not for anyone who remotely knows what they’re doing. When you get right down to it, most NAS boxes in this price range combined with free software can provide exactly the same functionality. As to Linksys’ claim of being able to access your media from anywhere around the world, after a year this requires a paid subscription where rival services offer similar access for free. Likewise DLNA 1.5 for streaming to UPnP devices (such as the Xbox 360) and an iTunes server are features found on most rivals.


When push comes to shove, it’s difficult to recommend Linksys’ Media Hub NMH405. Its media interface and colour screen do have their uses but are largely superfluous, while you can get more hardware for less elsewhere. Netgear’s excellent ReadyNAS Duo, for example, offers hot-swapping, tool-less drive installation, more RAID options, a third USB port (to which you can hook up a £10 memory card reader), a more durable full-metal chassis and BitTorrent support, all for £30 less. 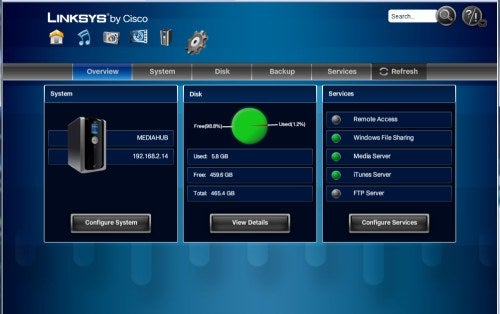 Of course there’s always Linksys’ 300-series to be considered, where the removal of the screen and card reader bring the price down to £210. Even so, £20 for the ReadyNAS’ advantages doesn’t seem like too much to spend, though the Media Hub 300s are still worth considering if you aren’t too demanding and want a less industrial-looking, slightly more compact NAS device.


Stylish, compact and quiet, the Cisco Linksys Media Hub NMH405 is nonetheless outclassed in build quality and features by rival products. Nor is it redeemed by its web-based interface or colour LCD screen, both of which end up being somewhat superfluous.