You’d be hard pressed to find a review on Churchill’s Solitaire – or, indeed, any form of press coverage whatsoever – that doesn’t open up with some kind of reference to former U.S. Secretary of Defense Donald Rumsfeld. I for one am not one to take a punt on being in any way original, so lets begin this review by pointing out that this is a game that’s been developed by (amongst other people) former U.S. Secretary of Defense Donald Rumsfeld.

Just what bearing this should have on any copy that follows is up for debate, though it’s arguably grating to those interested in the honour of the two time Prime Minister of the United Kingdom, Sir Winston Churchill, that it’s Rumsfeld and not the man whose name adorns the game’s title that’s garnering the most attention. Then again, play Churchill’s Solitaire for more than five minutes and you’ll struggle to find out just why his name is here in the first place. 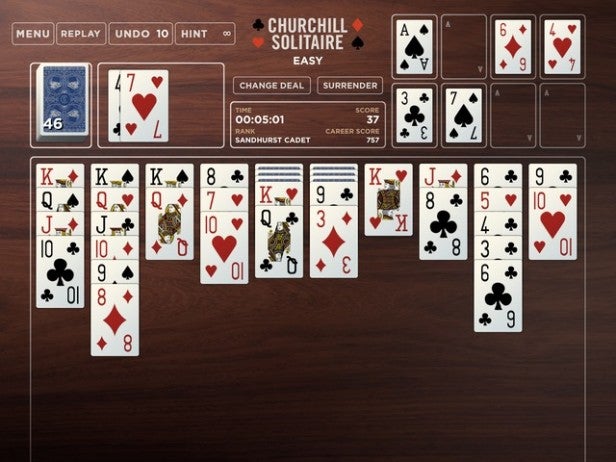 If that sounds like an overly negative assessment to start off with, lets clarify just what Churchill’s Solitaire has to offer. Strip back the dressing, and what you have here is an incredibly competent and well presented game of solitaire. This is a particularly tricky spin on the klondike brand of solitaire – or patience, if you will – that features a double pack. As such, the goal is to fill up the eight foundation slots with runs of all four hands twice over – from Ace through to King – though Churchill’s Solitaire’s USP is that it also fields a Devil’s Six.

In effect, that’s six cards that can only go straight into the golden packs rather than into the decks below, meaning as well as sifting through the mass of cards at the bottom of the screen in order to fashion them into some kind of order that enables you to lift them into the golden packs above, you also have to take into account six special cards that also have to slot into place. Get too focused on one or the other, and the whole thing goes to pot.

None of this, however, will be particularly new to any experienced card players and, indeed, Churchill’s Solitaire feels geared towards them. Hints can be purchased (although these hints are actually free if you play an easy deck, not that the game tells you this) as can the ability to undo your last move, but even with these trinkets unlocked, this is no easy undertaking. Indeed, even for the successful, making progress through Churchill’s Solitaire – if the ultimate goal of becoming Prime Minister interests you – takes a large amount of time. 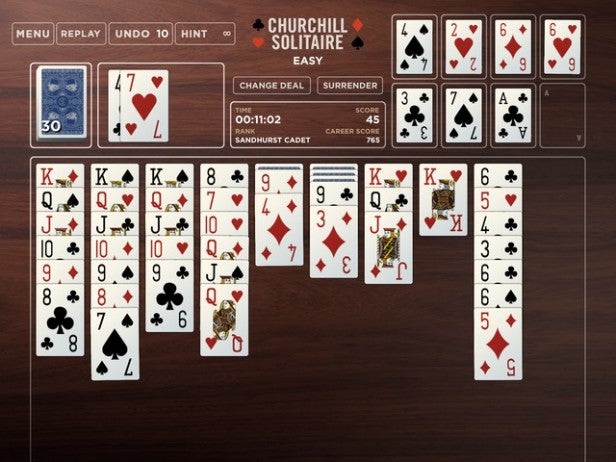 That’s because matches are tied to specific locations in Churchill’s life. Starting out in Sandhurst in 1898, you move forward by winning matches and earning points, reaching benchmarks that move you forwards through Churchill’s history, though – as any solitaire player will be aware – many matches simply aren’t winnable, and you can waste a lot of your time attempting to piece together a pack that, ultimately, can’t be solved. It’s the game’s unwillingness to point this out that ultimately highlights how this is no great play on the mainstream market, despite the IP its attached to.

Which, when everything comes together, makes this a rather bizarre little package. In practice, Winston Churchill has very little impact on the game contained within, which is on the whole is a more than adequate take on solitaire decorated in some very fine clothes. His appearance in the title, and via the odd quote and video sequence (annoyingly often displayed in the wrong resolution), feels a little cheap as a result, and it’s hard to know what bearing Churchill has on developer WSC Solitaire other than aiding the studio gain a handy promo spot on the App Store. 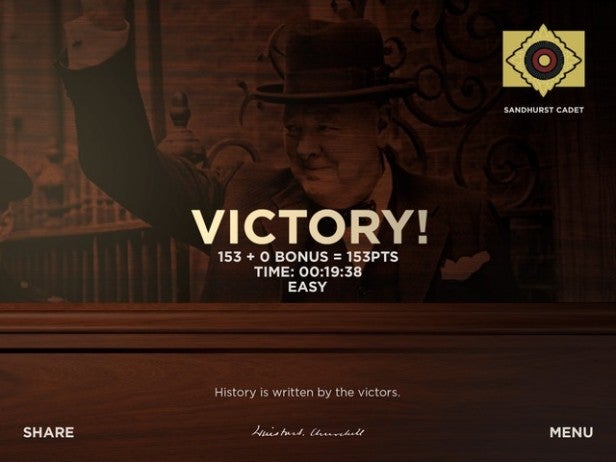 As such, Churchill’s Solitaire comes with the dubious honour of being one of those games you’d recommend to ‘people who like this sort of thing’, but a game that’s unlikely to spread the virtues of solitaire much beyond that circle. For Donald Rumsfeld, this is a nice nugget of evidence of just what the team below him is capable of, but in terms of App Store history, this is unlikely to make anywhere near as much a mark as its namesake.

Verdict
Those drawn to Churchill’s Solitaire on the basis of the former Prime Minister’s name will likely be rather disappointed – this is a solid, if unspectacular, take on solitaire with something of an unnecessary attachment to history surely lumped in to gain a bit of attention. Nevertheless, this is a well produced but safe take on an already well regarded card game.