Oh dear. As you could probably work out from the score above, Chrome Specforce is not a brilliant game. This in itself is not a tragedy. The PC is hardly starved of brilliant FPS games, and one more on the reject pile won’t hurt. But in this case it actually makes me feel slightly sad. Maybe it’s because Techland is a small Eastern European developer, or because there are signs of real achievement in this game, but I can’t help thinking that Chrome Specforce could have been a decent game, if only a few points had been kept in mind. 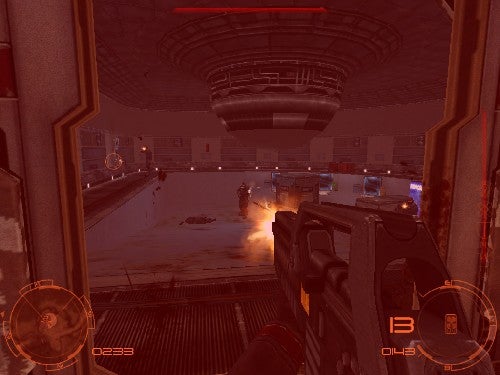 You see, Techland has actually got a respectable engine here; no Doom 3, Far Cry or Source, I’ll grant you, but one that does outdoor scenery with a certain level of aplomb. It has used this to create a world of deep forest wetlands filled with sinister enemy bases, and then tried hard to make a futuristic military FPS with all the current mod cons: allied troops, big set-pieces, vehicles, etc. The only problem is that it just doesn’t quite work. I don’t want to be mean or cruel about this, so if you’re from Techland or any other developer of low-budget FPS games, consider this some friendly advice. 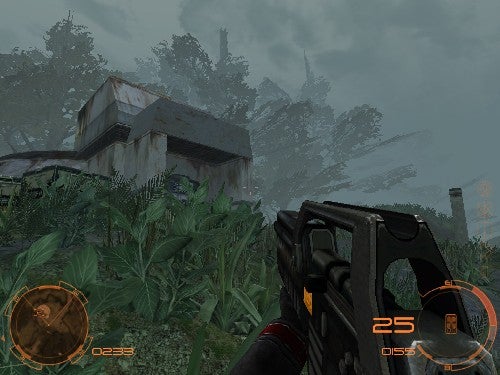 Point One: ”’Play to your strengths, but for goodness sake do something about your weaknesses.”’


The Chrome engine has a real strong point; it does great forests, swamps, jungles and marshes. True, the vegetation doesn’t look too good up close, but in motion you really get a sense of pushing your way through murky water and dense foliage. The best parts of the game are where this meshes with the considered, tactical pace of the action, with your sci-fi, spec-ops hero creeping in on a group of corporate troopers, or encountering a sudden ambush from a slope above. However, either the Chrome engine doesn’t seem quite so adept when it comes to interior scenes, or the game’s artists simply can’t be bothered with them. Chrome Specforce has probably the worst rooms, halls and corridors I’ve seen in a PC FPS in years, and then repeats them from level to level. Sticking to the trees might have been a smart idea, but making the interiors look as good as the outdoors stuff would have been even better.

Point Two: ”’Give your characters character.”’


Chrome Specforce has hordes of enemy troops, some friendly rebels to win over, and a comrade to battle through the game with, so why don’t any of them have any personality? The enemies are generic to an almost spectacular level – generic troops with generic battle armour shooting generic weapons at you. Even if they run for cover and make occasional efforts to outflank you, they’re as dull as dishwater and about as menacing as a group of weekend ramblers. Think of Halo’s covenant forces; the way the little guys sneak around or run for cover, while the elite troops charge in full of arrogance and fury. Think of the Combine forces in Half-Life 2; their radio messages, their concerted movement, their casual brutality. That’s personality. And remember – it’s not just in the design, but also the animation. Nobody in Chrome Specforce runs in a remotely believable manner, and even the death motions look jerky. It all stops you feeling that these are real soldiers fighting real wars on real distant planets. 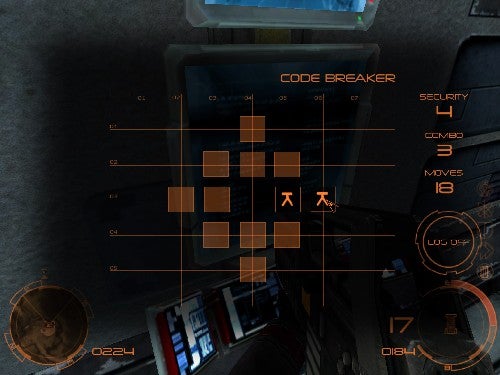 Point Three: ”’Variety is the spice of life.”’


Chrome Specforce takes efforts to make each level different, with new objectives and new circumstances for each one and some set pieces thrown in along the way. But in the end it doesn’t matter if the forest is green, blue or brown if all you’re going to do is wander through it, find a base, hack a console, and repeat. Each mission feels a bit monotonous, and they build to form an equally monotonous whole. Again, think of Halo as a comparison point – the way it varies environments and localities. It also doesn’t help to have a game so dominated by one type of adversary. When everyone you shoot looks and acts the same, boredom is sure to set in. And no, the pitiful memory-game console hacking bits don’t count as variety. They’re just pointless and annoying. 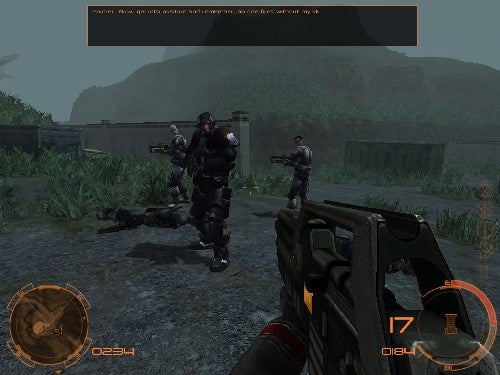 Point Four: ”’If you will have vehicles, use them.”’


Why put speeder-bikes, tanks, jeeps and helicopters in the game if you can only use certain ones at certain times, and even then you’re pretty much stuck on rails? Why bother with a speeder-bikes chase scene so tedious, fiddly and anti-climactic that it takes a will of iron just to carry on playing? Why? Why? 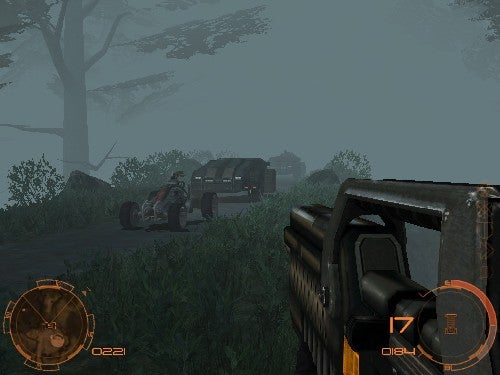 
There’s a good reason why people talk about the AI in Halo or Half Life 2 – it’s because you can see some governing intelligence at work, and because your enemies seem driven by self-preservation and a desire to kill you. That doesn’t mean that they always take the best tactical approach or have the shooting skills of an Olympic marksman – it just means they pose a reasonable challenge in numbers and force you to think about your approach. Getting shot repeatedly from long-distance by an enemy you can hardly see isn’t nearly as much fun, and nor is spending minutes at a time cowering behind a barrel trading shots with a goon doing likewise. We play these things to feel heroic, not to get penalised for rushing the enemy! 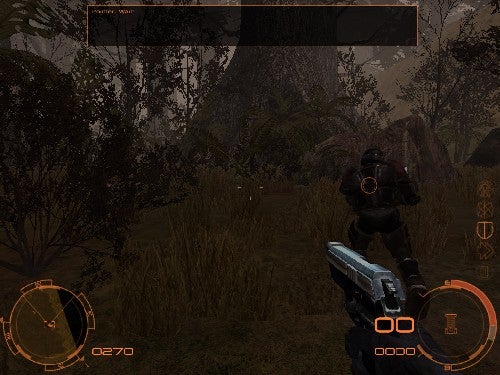 
We can excuse a fairly generic set of weapons, with several variations on the assault rifle, pistol and submachine gun, plus sniper rifle, grenade launcher and rocket launcher. It’s OK. It’s expected. However, if I hit someone with a rifle-shot, I want to see them thrown back a little, not just look mildly perturbed. If I fire a rocket at someone, I want to see them thrown in the air by the explosion. It doesn’t need to be complex, rag-doll physics stuff – though in this day and age it really ought to be – but it would be good to feel that your weapons were actually doing some damage before the death animation kicked in. Even the sounds here are a little wimpy. Sorry, but it’s just not good enough.

Point Seven: ”’Use your imagination.”’


There are times when I quite enjoyed playing Chrome Specforce – moments of tense confrontation or sneaky, pick-em-off gameplay – but for the most part it’s terribly bland. The plotline is fiendishly predictable, the action repetitive, the set-pieces so frequently come down to “watch it, there’s a load of guys coming your way.” We might be getting a bit bored of the standard FPS now, but from Half-Life 2’s epic dystopian narrative to Brothers in Arms meticulous WWII accuracy to Doom 3’s survival horror leanings, it’s clear that this is a genre that can take different paths and bring different pleasures – if only developers exercise a little imagination. Chrome Specforce’s damp forests and constant drizzle could have provided the background for an interesting story and some great moments of adventure, but instead we have a dry, overly-technical tactical shooter in which you spend far too much time searching bodies and managing your inventory. How about some fun? 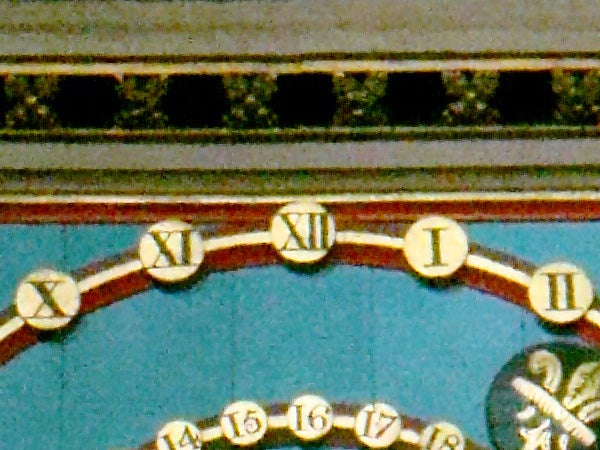 So developers, unless you have something better than this to offer, please don’t bother. As for anyone in the market for a new first-person shooter? Well, Chrome Specforce is cheap and has its moments, but there must be something better out there that you haven’t played. Try Doom 3, Half-Life 2, Halo, Far Cry, Chronicles of Riddick, Call of Duty, Painkiller, Medal of Honor, Brothers in Arms, Star Wars: Republic Commando, SWAT 4, and Deus Ex: Invisible War before you even think of trying this. 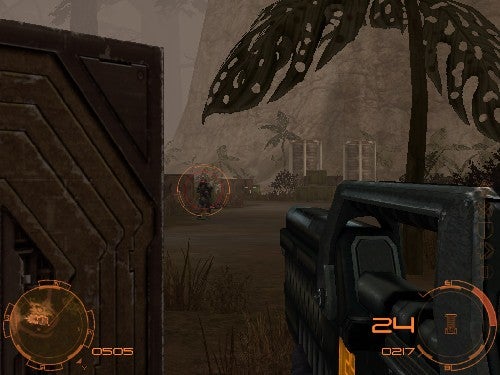 
Chrome Specforce doesn’t look half-bad. If only it played half-good. Developing a decent engine is one thing, but Techland really needs to learn how to build a better game.