What is the Chord Mojo + Poly?

The Chord Mojo is arguably the best pocketable DAC and headphone amp you can buy. If you want to feed Hi-Res Audio from your mobile to your high-end headphones, you need a Mojo. But how about if you don’t actually want all those massive music files clogging up your phone storage or want your Mojo’s DAC at the heart of a fully fledged network streamer? That’s where Chord’s new Poly add-on comes in.

The Poly piggybacks the Mojo, adding a microSD slot for unlimited tune capacity, as well as Wi-Fi and Bluetooth for streaming and control. So you can now keep your Mojo (with added Poly) in your pocket while you use your phone to wirelessly control the tunes the Chord combo pumps out of your headphones.

The Chord Mojo itself isn’t cheap at £399, but the Poly is an additional – wait for it – £499. Thankfully this unique pairing is so good and so versatile that it actually feels like a massive bargain. 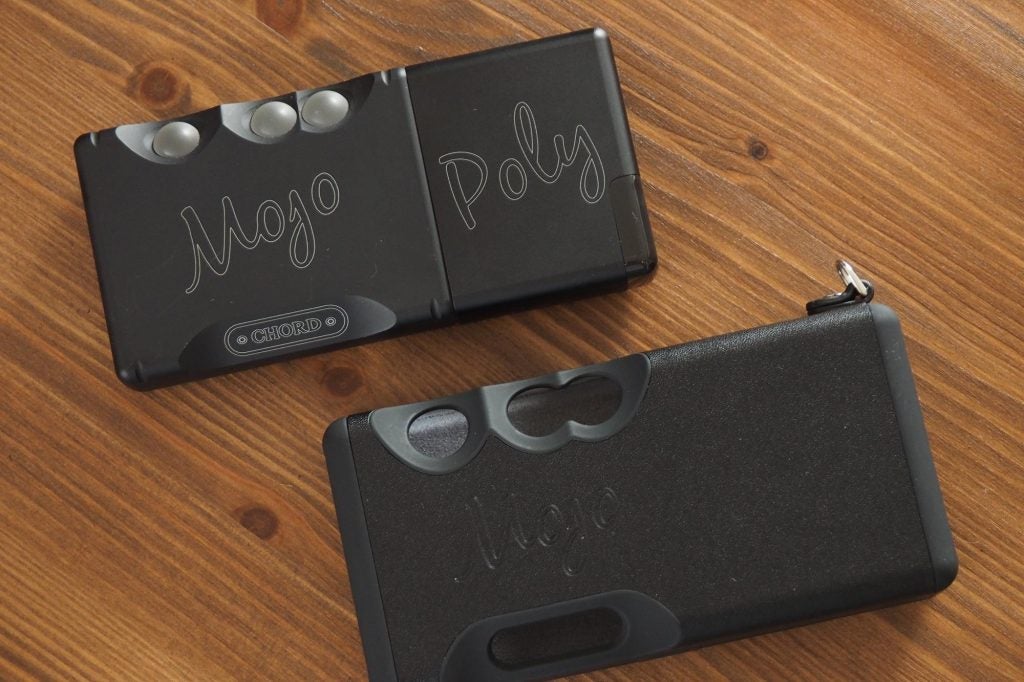 The Poly is the perfect match for the Mojo both in terms of aesthetics and build. The same matte-black paint on a gently contoured aluminium case, the same font for the Poly name emblazoned across the top, and the same height and width so that the two products fit almost seamlessly together.

The two Micro USB plugs on the Poly’s side slip neatly into the corresponding sockets on the Mojo’s side, with one for feeding the Mojo with digital music and the other basically a charging pass-through. The latter means both the Mojo and Poly can be simultaneously charged via the Poly’s Micro USB port to give a total of nine hours’ playback from less than four hours of charging.

Inside, the Poly has military-grade circuit boards, on which are crammed what’s basically a proper computer with data server, DLNA receiver, Wi-Fi hub, Bluetooth and microSD card reader functionality. 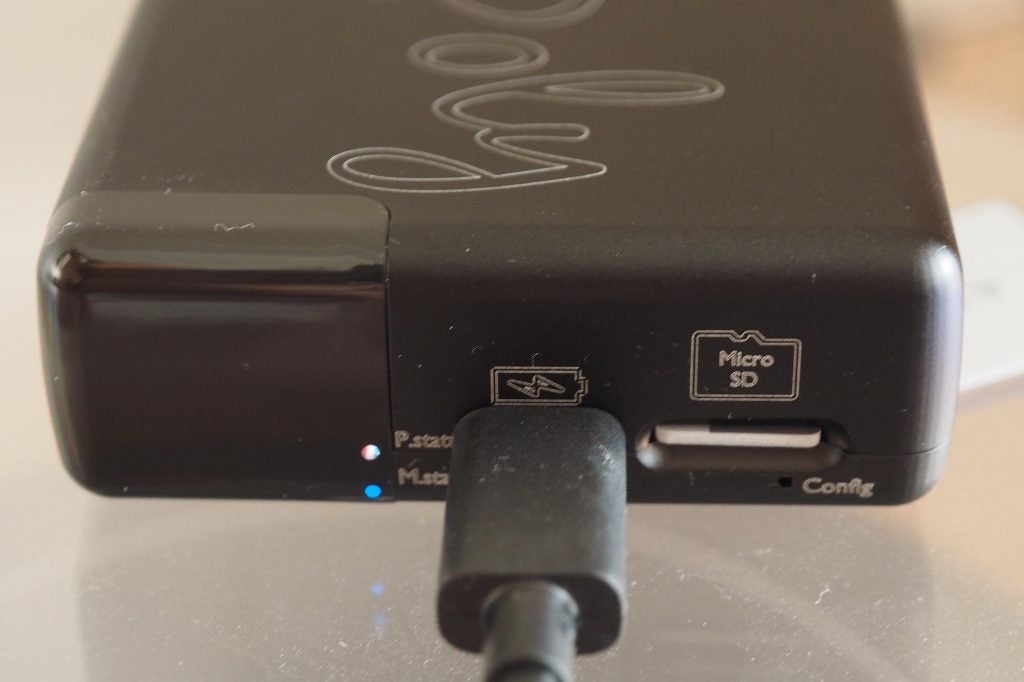 A Chord representative previously told me that Bluetooth was only added as an extra, but it’s also available to aid with networking setup and for music control via the GoFigure app, out for iOS but still not yet for Android – soon, though, apparently. For home streaming, the Poly is intended to be used over Wi-Fi for the best sound quality, and for now can be connected to a mobile device in Wi-Fi hotspot mode when on the go. There’s a wide choice of compatible DLNA apps for iOS and Android, and Chord has also built in support for Roon.

If you’re unfamiliar with the Mojo, it’s a little pocket powerhouse of a DAC and headphone amp, with a pair of 3.5mm outputs that can also be used as line outputs for hooking up to a full hi-fi system. It has three controls, all of which are styled as disco-tastic translucent balls – one for power and the other two for volume up and down. These ball-buttons glow different colours to indicate status, with the power one changing depending on file bit-rates, and the colour of the volume ones indicating, er, the volume. 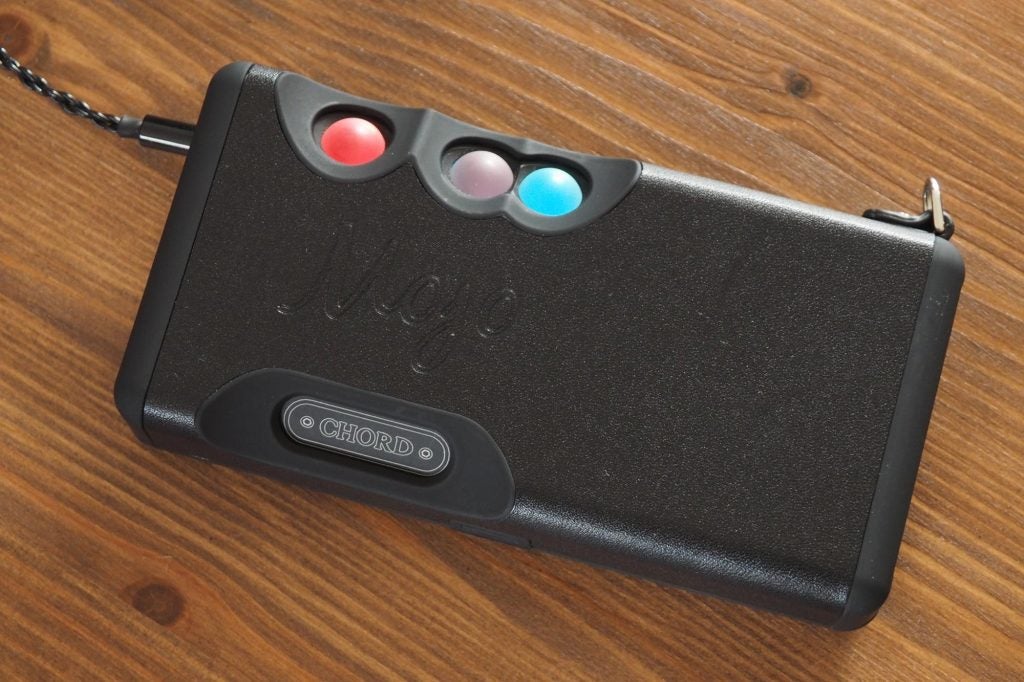 The optional £80 case keeps the Mojo + Poly safe and securely together, but adds a lot of bulk. A slimmer leather case is on the way, though

I tested the Mojo + Poly on the go with Noble Audio Kaiser Encore earphones, and at home plugged into a Leema Acoustics Tucana II Anniversary Edition amp powering Tannoy Legacy Arden speakers. Sound like overkill? Trust me, it isn’t.

I used BubbleUPnP as a control app, which also enabled me to plug into Qobuz and Tidal accounts for Hi-Res Audio streaming.

Setting the Poly up for connecting either to a home network or your device’s hotspot is pretty simple, even without Chord’s GoFigure app – which wasn’t available to me at the time of review. Using the supplied tool (or a paper clip), you can press a recessed button to turn the Poly into a Wi-Fi access point. Connect to the Poly’s Wi-Fi and then a web portal in your browser will help you to add any network SSIDs and passwords you need.

With that done, it’s time to get the Mojo + Poly playing some tunes. I had a microSD card already bubbling over with musical goodness, so I stuck that in the Poly’s slot, put my phone in hotspot mode, opened BubbleUPnP and sat back for a listen.

And, well, blimey. I’ve used the Mojo and its larger Hugo counterpart countless times, but they still blow me away. Every. Single. Time.

It’s not just the perfect timbre with vocals that get me, nor the excellent detail retrieval – but wow, yes, those are all on-point – it’s also the low noise floor that helps intimate recordings sound even more intimate. With the right headphones, you can hear those fabulous intakes of breath and those more subtle edges to a guitar pluck. 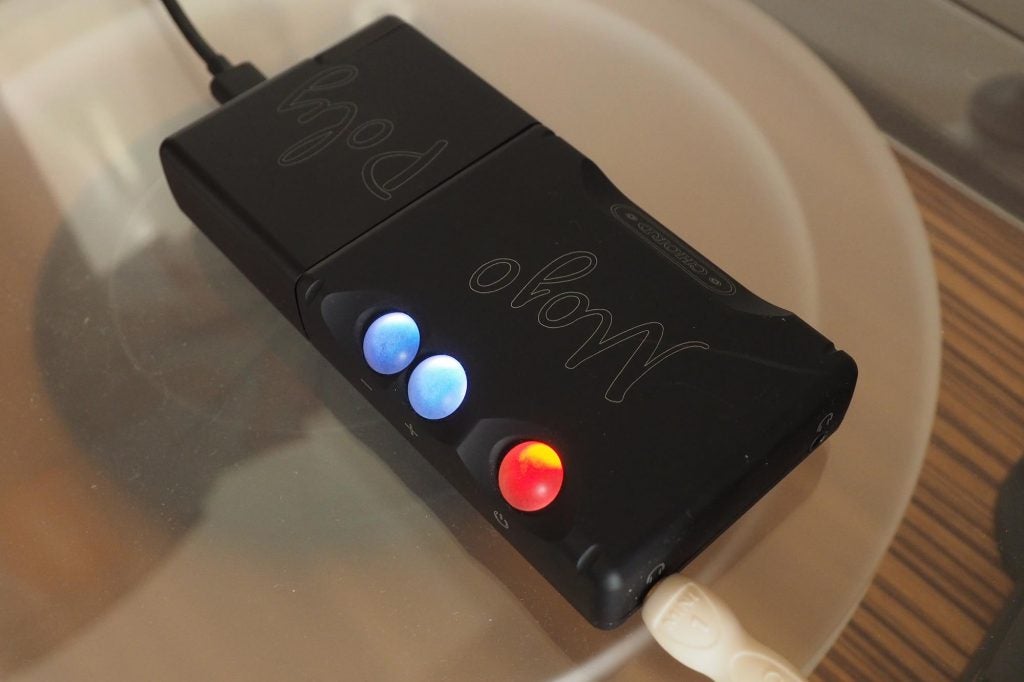 The Mojo’s transient handling is also phenomenal, with notes stopping and starting on a sixpence. This is such a dynamic performer.

With the headphones popped out and a 3.5mm-to-phono cable tying the Mojo + Poly to my home hi-fi, I tried out its network streaming chops. Setting the Mojo to line output simply involves holding both volume buttons in while you power it up.

If you’ve been using a network drive or computer as the source for your home streaming setup, just forget that. With a decent-capacity microSD card or two, the Mojo + Poly is your streamer and server in one, remotely controlled from a phone, tablet or laptop. What seems like a portable audio oddity actually turns out to be probably the neatest music streaming solution so far – and one of the best-sounding.

The Mojo + Poly double-team is exceptionally good. The Mojo has already been established as being without peer at its price, and the Poly upgrades it to a world-class DAP and streamer with a quirk that actually turns out to be a positive – the lack of screen and UI means you’re left to pick from an app that suits you, rather than having an interface forced upon you.

Battery life came in at around the claimed nine hours with portable use, although it’d be nice if there was a clearer battery meter. A tiny LED changes colour to indicate the level in 25% increments – although at least they run in a fairly logical order of blue, green, orange and then red. Still, I’d rather have three or four separate LEDs. 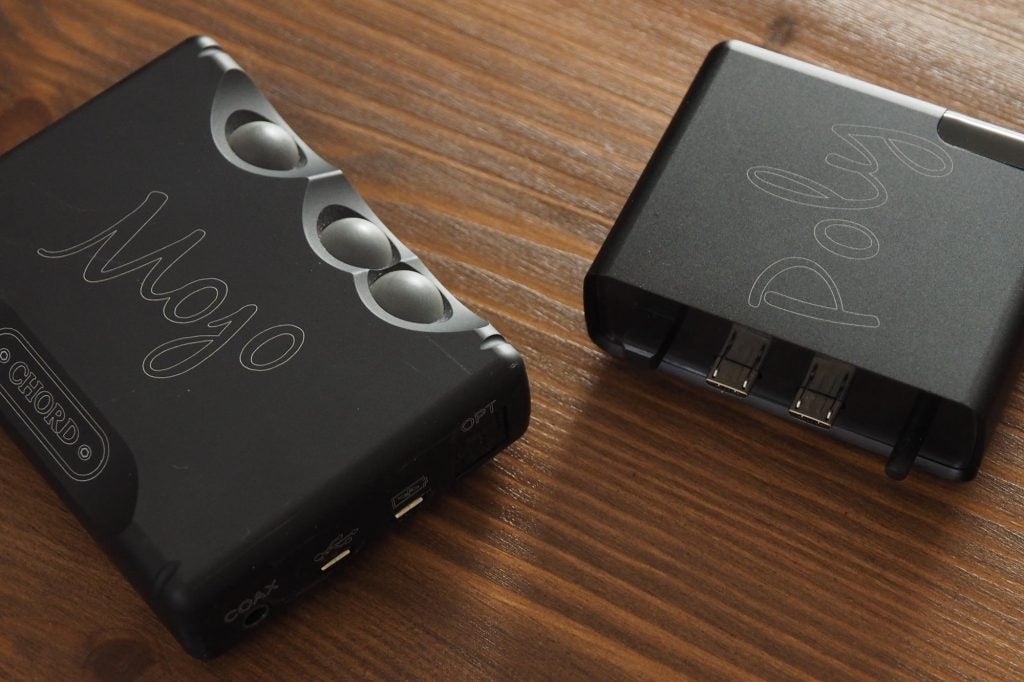 Why buy the Chord Mojo + Poly?

If you’ve already got a Mojo, you’re probably salivating at the prospect of adding the Poly. It’s a slick upgrade in every way, turning an awesome DAC/headphone amp into a powerful network streamer and portable Hi-Res Audio player.

Ironically it’s probably a little more impressive in home use than on the go. The nine-hour battery life is decent but not amazing, and the whole package becomes a little chunky if you use the optional case to secure the two products together. But this is still a stunning, unique proposition for audio geeks.

An incredible, unique combo for streaming Hi-Res Audio at home as well as listening on the go.