CHiP is the latest in a line of robot toys that stretches back through to 2014’s MiP, 2011’s Roboraptor X and the original 2004 Robosapien – all of them big Christmas hits, if not the must-have toys of their respective years. It’s too early to say whether CHiP will have the same kind of impact, but I wouldn’t bet against it. He’s one adorable four-legged friend.

Turn him on – there’s a power switch beneath a clip-off panel at the front – and his eyes light up blue and he springs into action. Motors enable his head to turn left and right, while each limb can move independently forward or backward.

At the end of each paw you’ll find a Mecanum wheel, with the cylindrical protuberances enabling CHiP to speed forwards or backwards, rotate, or even move sideways across most of the floor surfaces you’d find in your typical home. Carpet, vinyl and wooden floors haven’t tripped CHiP up during testing, although there have been episodes where the little bot’s sheer enthusiasm has made him come a cropper. 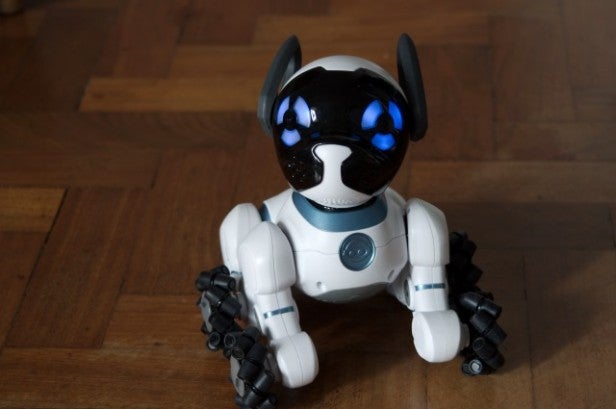 CHiP is also stuffed with sensors. Capacitive sensors on his head enable him to respond to touch and simple gesture controls. A built-in gyroscope and accelerometers help him keep track of motion, speed and orientation. CHiP can sense nearby objects through infrared sensors, while audio sensors allow him to respond to certain sounds, such as a clap, and even speech. He isn’t quite the 2016 equivalent of Lassie or the Littlest Hobo, but you can just about call him smart.

So, what does CHiP do? At the most basic level, he’ll respond to your gestures and movements. Tap his head and he’ll sit or lie down, depending on whether he’s sitting or standing. Stroke his head back to front and he’ll sit down and he’ll lie down making cheerful noises.

In addition, touch his nose and he’ll sniff around, pick him up or push him and he’ll act surprised, or even become angry – although his growls aren’t exactly fierce and his ire won’t last for long. 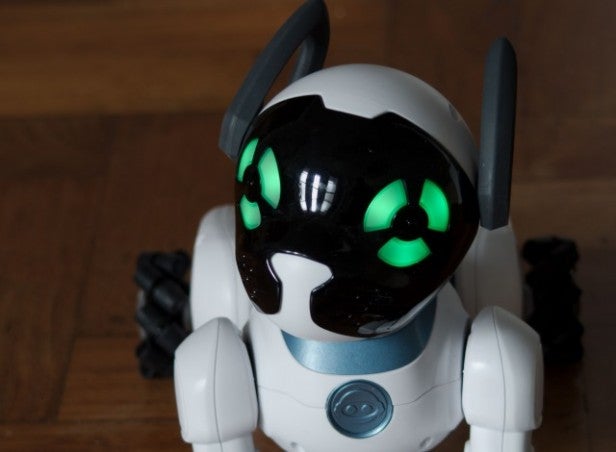 That’s pretty cute, but CHiP is just getting started. Say “Hey Chip” and he’ll receive voice commands, his eyes glowing green and his posture changing to show attention. Say “Sit Down” and he’ll sit down. Say “Good Dog” and it makes CHiP happy. Say “Love you” and he’ll blow kisses at you.

Then there are CHiP’s party pieces. Say “Yoga” and CHiP will go up on his front paws and run through his stretching exercises. Say “Let’s Dance” and CHiP will play a tune while pulling off an outrageous doggy dance routine, complete with wiggles, spins and what can only be described as a pup-sized pelvic thrust.

Even now, CHiP isn’t done. Pull the accessories out of the box and he’ll do even more.

First comes the wristband, with a Bluetooth link to CHiP and a four-way D-pad surrounding a large CHiP button. Press and hold the central button for a few seconds and you can take direct control of CHiP using the D-pad. He’s a little over-exuberant when it comes to speed, not to mention twitchy in the handling, but then that’s all part of the fun.

Press downwards and he will start to follow you. Press upwards and he’ll come and find you, sniffing around until he locates you with a satisfied bark. Press left and he’ll learn that you “liked” his last action, meaning he’s more likely to do it if you ask him again in future. Press right, and you don’t need to say “Hey Chip”; the little chap will be ready for his next voice command. 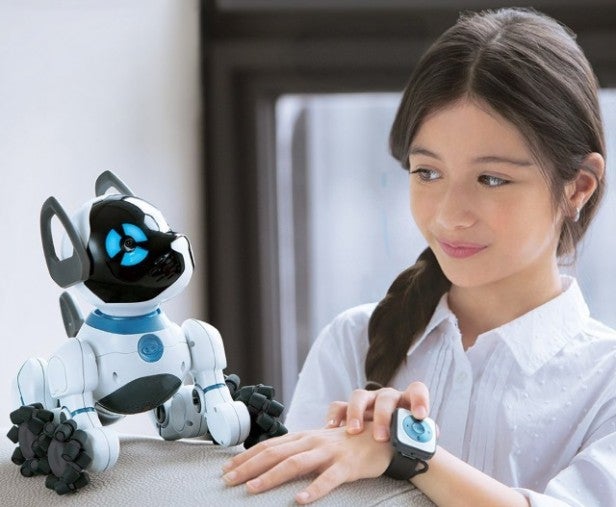 And CHiP has his own toy; a ball. Switch it on and say “let’s play” and CHiP will run and find it, cradling it protectively in his forepaws. Wear the watch and say “fetch” and CHiP will bring the ball back to you.

CHiP will also work through Bluetooth with an iOS or Android companion app. You can use this to browse through CHiP’s voice commands and gestures, but also to set new actions for the latter.

There’s an additional remote control feature with a choice of two control schemes: one simple but slightly over-twitchy; one supposedly intuitive, but prone to sending CHiP careering at ludicrous speeds around the room in a way that threatens life, limb, breakable objects and skirting boards.

In addition, there’s some simple virtual pet-style functionality, where you can feed CHiP and throw him things to play with, or get him to go to bed – not to mention a little messages area where your canine chum can send you notes.

Chip runs on an internal Lithium-ion battery and comes with a “smart bed” in which the bot charges – but in a quite ingenious way. If he’s running low on power and near his smart bed, he’ll glow red, the bed will glow red, and CHiP will settle down for a nap. About 90 minutes to two hours later, he’s ready for action again. We’ve found the batteries usually last for between two hours and four hours, depending on how much action the little fella’s getting. 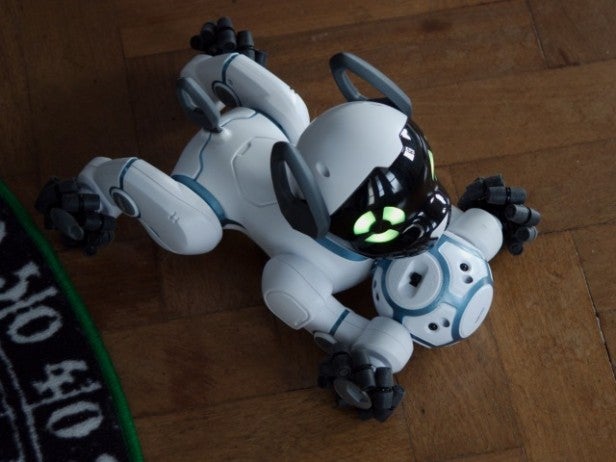 Now, CHiP is a lot of fun. Everyone in my household (bar the cats) pretty much adores him – my daughter wants him to sleep in her room at night. All the same, I have some reservations.

For a start, he isn’t really quite as sophisticated as you might think. He has a fairly limited selection of commands, and there’s no way to add new ones, even through the app. It would be nice to be able to put together new dance sequences or pull together new motions, preferably through a simple block-based coding interface, but this isn’t an option.

The virtual pet elements could be stronger, and it would be great to be able to add a new song for him to dance to. After all, while your CHiP might like Justin Timberlake or Katy Perry, mine might prefer, say, Mastodon or Mozart.

There are also some more functional issues. The voice commands are a little hit and miss. I get them to work about 80% of the time, but my daughter gets a lower success rate with having to speak in a very low, very clear voice. In practice, imitating an American accent also seems to help.

CHiP can also struggle to find his ball – corners are a navigational nightmare – and even finding you can be a struggle if you step more than few metres away… although watching him try to find you is all part of the fun. 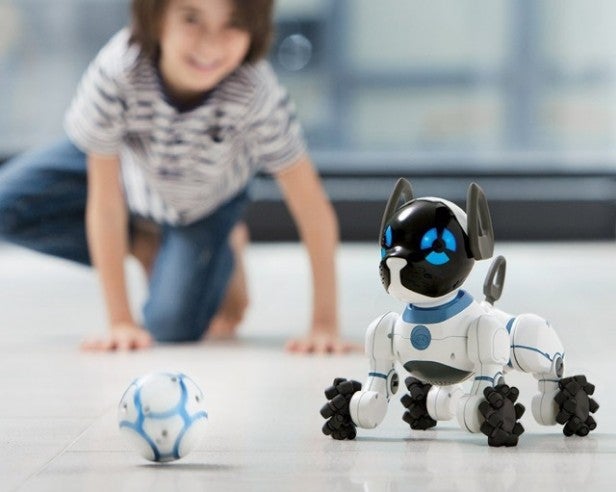 Floor surfaces definitely have some impact; CHiP looks more confident and steady on the carpet in our upstairs rooms than on the parquet we have downstairs, although we kind of like to see him running amok on the wooden floors.

It also must be said that the wristband feels cheap. Also, if CHiP runs out of juice before he finds his bed, there’s no way to get him into the right posture for the contacts on his underside to meet the contacts on the bed. Instead, you’ll have to plug the AC adapter into him directly – the sheer indignity!

All these things put me off a little, particularly when CHiP comes in at nearly £200. On the plus side, there’s scope for improvement thanks to firmware updates through the app, and it has to be said that the Andrews family has pretty much fallen for the little tyke’s antics. This isn’t yet the robot dog you’ve always dreamed about, but it isn’t for a lack of charm.

CHiP isn’t the perfect robot pooch, but he’s awfully cute, with a nice range of features and abilities and scope to improve.

At £200, it can be hard to reconcile the high price tag against his limited customisation features and lack of any real programmability – there’s a sense that opportunities have been missed – while the voice recognition requires patience and training.

Yet if CHiP loses points for technical issues and value for money, he scores hugely on sheer adorability. This speedy, exuberant plastic pup is almost irresistible.