In our constant quest for more desktop real-estate for less money, the de-facto standard LCD monitor size keeps increasing. In 2006, the most popular sizes were 17 and 19 inches. These have since been superseded by 20 and 22″ screens in the mainstream, with 24 inchers dominating the high-end. 15 inch LCDs, once the ruling size (back when one of them cost you an arm and several toes), seem to have dropped off the map; many e-tailers don’t even stock them anymore. 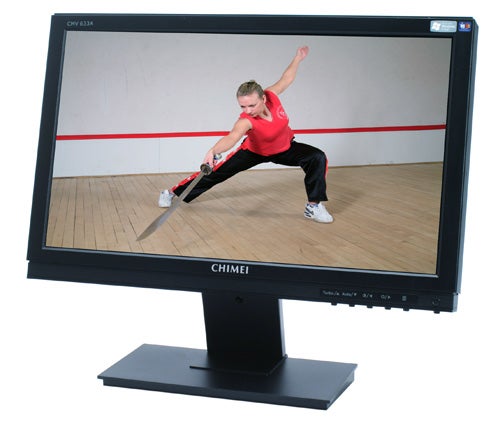 So it’s somewhat surprising to find one of the smallest monitor-boxes that we have seen for quite a while in the office, containing Chimei’s new 16″ widescreen monitor. Yes, unfortunately you read that right, not 17in, not 15in, but 16in. We say unfortunately because the actual screen-diagonal of the Chimei is 15.6 inches, negating the surety of recent years where the inches advertised equaled the inches you got to see and use. However, this product is not geared towards consumers who want a maximum of desktop space, so you might not mind too much. The Chimei has, by virtue of its size, placed itself in a somewhat unique segment of the market. As the near demise of its smaller rival has proven, it is too small to hold broad appeal to the average home PC user. So what market is it suited to, and more importantly, do you want one?


Unpacking and assembling the CMV633A is an exercise in ease. You just click the base in, connect the provided cables, and you’re set. It is well protected, and comes with all the bits and bobs you need to hook it up – which is easy since there are not that many ports to connect to. Forget about the digital revolution, this little 16″ comes with one single graphics connector, the good old analogue VGA port. If you’ve managed to stifle screams of indignation, we could point out that the target market for the Chimei doesn’t require anything more. This is not a screen you want to use for graphics work or gaming, or likely to be paired with powerful PCs. However, its TV-friendly 1,366 x 768 widescreen resolution, if not its size, is ideal for watching movies, even allowing you to run 720p content. 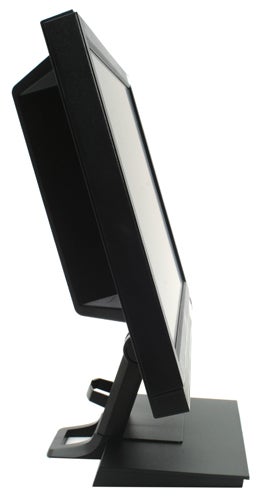 Although for the price you can actually get a bigger, higher-resolution LCD, that’s not what the Chinmei is all about. Essentially, 16″ (I’m not going to refer to it as 15.6″ all the time) is the ideal size if you’re short on desk space (commercial institutions and small businesses spring to mind), since 15 inchers are not only hard to find but don’t tend to support widescreen resolutions.


The Chimei is also eminently portable (you can easily carry it with one hand), and might make an ideal monitor for your children’s PCs. Miniature, cheap ultra-portables like the EeePC are flooding the market right now, most of which offer screen sizes around 7 inches. Hooking one of these up to the fairly portable and affordable Chimei CMV633A makes for a far more comfortable movie and working experience. It might also find a home as a secondary screen for your Laptop, although this is obviously a niche market.

So, onto the body of the beast, and while it’s never going to win any design awards, Chimei has given the screen a solid, industrially chunky look, using plastics that feel rugged and durable – important if you put it to some of the aforementioned uses. There’s a cable-clip at the back for tidying the power, VGA and 3.5mm-audio cables. Yes, this screen has speakers and yes, they are rubbish. But even though explosions sound like someone punching through paper, Batman grumbles like The Thing and bass is noticeable only in its absence, they’re adequate for light entertainment duties and they let you hear Window’s peeps and plings, which is all many business users require.

Another concession to practicality over style is that the CMV633A has its buttons located under the bezel, with labels clearly printed on the front fascia. These labels help when navigating through the slightly awkward OSD, without resorting to the antics some monitors inspire. Chimei’s cutie (yes, it is) also makes up for its menu’s awkwardness by offering direct control over brightness, contrast and a frankly baffling selection of preset viewing modes. What appears to be, for all intents and purposes, a business-oriented LCD monitor offers game, movie, photo, text, standard, user and ‘colourful’ modes – its drab mode is available only for corporate users.

The CMV633A even offers an ‘ideal aspect ratio’ mode, in which it maintains the source’s original format. Pixel for pixel mapping might be argued to be redundant in a monitor this size, but we think it’s a great feature to have regardless.


In fact, Chimei’s offering makes a reasonable case for itself as an entertainment device. Noticeable backlight bleed from the bottom bezel and rather poor viewing angles are the only major blemishes on an otherwise surprisingly accomplished performance, including exceptional motion-handling (easy on a screen this size, but still not a given), and natural colours. In common with most TN panels, you lose some detail in shadowed areas, but again on a screen this size it’s hardly conspicuous. 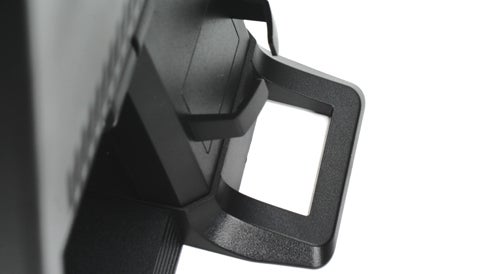 
Chimei’s CMV633A probably marks an emerging market for cheap, reliable but unremarkable monitors below 17 inches. It is portable, rugged and fairly appealing. While it might not suit the average home-PC user, for businesses looking for a diminutive monitor for space or aesthetic reasons this might be just the thing. EeePC users might also enjoy hooking up to something that’s a little easier on the eyes for office work, games and movies, though its size means it’s not much larger than a normal notebook display and this does restrict its appeal.