With 22in LCDs becoming so popular of late, there’s no shortage of fairly bog standard affordable options out there. However, very little divides them and in truth truly noteworthy examples are few and far between. Of all, Samsung’s 226BW and HP’s w2207 have been the most eye-catching, while the legendary Samsung 215TW continues to confound all other efforts. Strangely, though, manufacturers seem reluctant to use some of the higher grade panel technologies in 22in displays, perhaps thinking that punters won’t pay the premium for a really good 22in screen when they could make the step up to a 24in monitor. 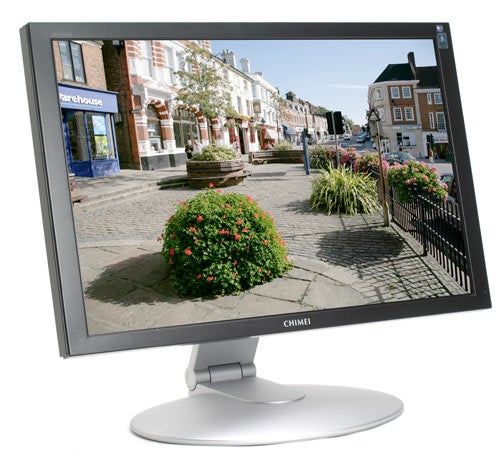 Wherever the truth lies, this sector remains incredibly competitive. Thus, companies must work a little harder to make their products stand out from the crowd. Enter Mirai, with its first offering under the Chimei marque. Its previous effort, the DML-522W100, was sold under the Mirai moniker and it was a cheap and cheerful model. Is this latest offering, the CMV 222H, an improvement on previous offerings?


Taken at face value it’s like any other 22in display, with a 1,680 x 1,050 native resolution and a bog standard 18-bit (3 x 6-bit) TN panel capable of producing 16.2 million colours. However, Mirai has taken the distinctly unsubtle approach of adding a bundle load of connectivity to try and tempt consumers its way. As such, unlike most 22in LCDs that trot happily along with DVI and D-Sub, the Chimei CMV 222H features HDMI, D-SUB, Component, Composite and S-Video inputs. To further sweeten the deal a card reader that supports SD, MMC, Memory Stick, Compact Flash, Smart Media and xD formats is included, along with a ubiquitous 3.5mm audio jack for feeding audio to the typically puny integrated speakers. 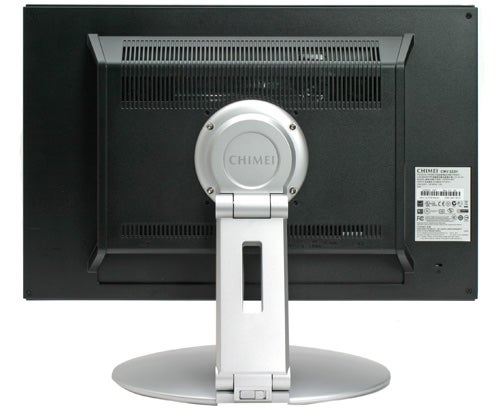 Amazingly, all this connectivity will cost just shy of £255 before delivery. This, you would rightly surmise, is a pretty good price for a display this versatile, though those with any sense would rightly suspect that there must be something about the CMV 222H that wasn’t quite up to scratch. And indeed, you’d certainly be right in this respect.


First, though, despite the suspiciously low price, the CMV 222H is not at all the ugly duckling you might imagine it to be. It’s not the definition of style by any means, but it has a simple and inoffensive charm to it. It has a nice slim bezel, finished in smooth to the touch matte black. In addition, since no product is complete without some glossy black action, there’s a strip of the stuff on each outside edge, though you’re hardly likely to notice it there. To complement the black bezel, the base is finished in silver, while all control buttons are hidden on the right outside edge for a sleek button-less front fascia.

Aside from the lack of front facing buttons there’s also a pleasing lack of other distractions on the front of the display, just a power LED, which can be turned off in the OSD, the Chimei logo at the bottom, model number at the top left and a couple of stickers which can be easily removed. There’s also a modicum of adjustability in the stand thanks to a dual hinge design, allowing you to adjust height and tilt independently. 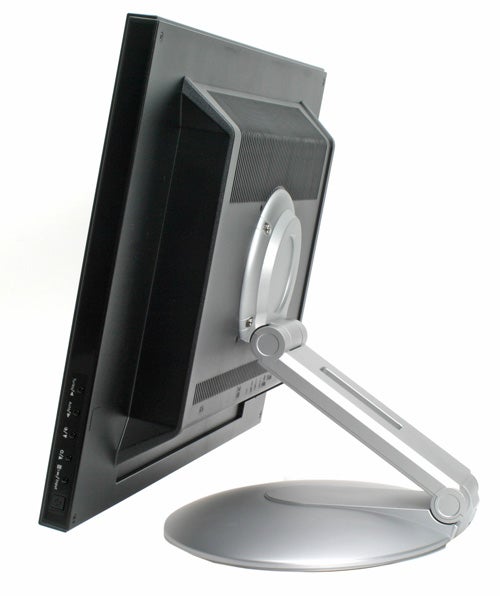 You can also rotate the display thanks to a rotating plate underneath the base, while the large surface area of the base ensures that the monitor remains very stable at all times. This combined with the simple but pleasant aesthetic make the CMV 222H a surprisingly well put together and good looking screen that should suffice for most requirements. VESA wall mounting is also supported, so you can wall mount the display or even use a monitor arm should that be your wish.


For tweaking the settings, the OSD can be accessed by holding down the input switch button on the outside edge. Once again the CMV 222H surprises in both the design and options available to you, with a nicely styled OSD that’s chock full of options. Default colour options include 6500K, 7500K, 9300K, sRGB, with the option for user defined controls. Naturally, you can adjust Brightness and Contrast to your heart’s content, while you can also adjust Sharpness, Colour (saturation), Hue and Backlight level, in addition to all of the other options normally available. 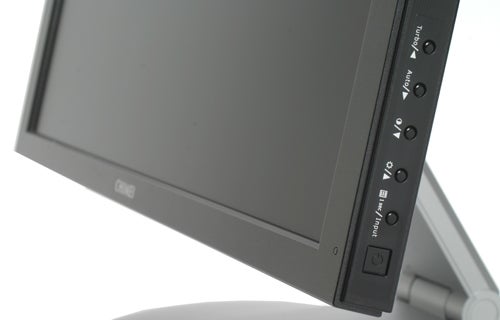 As already mentioned, there’s an HDMI port present, and it ought to go without saying that it’s HDCP enabled, so you can plug in your HD DVD and Blu-ray players – though as we’ll detail later, you probably wouldn’t want to do this. Indeed, to repeat a mini-rant from the Iiyama ProLite B2403WS review, one has to question the real value of having HDMI over DVI in displays such as this. It may make for good marketing literature, but its practical use is arguable. Moreover, to add insult to perceived injury there’s no DVI-to-HDMI cable in the box, so out of the box you’re limited to D-SUB.


The 16.2 million colours that the CMV 222H produces (using dithering remember) is well below the 16.7 million (real) colours of a 24-bit Truecolour panel, so this isn’t a screen you’d want to use for serious image editing. Other than this, Chimei/Mirai claims a typical grey-to-grey response time of 5ms, contrast ratio of 1,200:1 and a brightness rating of 330cd/m2. All of which is fairly reasonable, though as ever we’re inclined to take any literal claims about monitor performance with not just a pinch of salt, but a large pile of it. 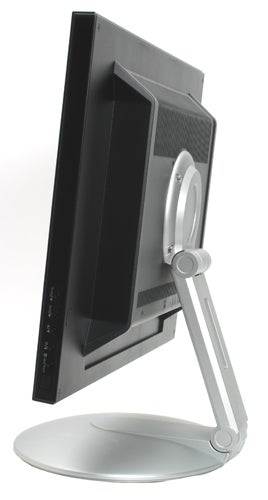 For example, by default a “dynamic” contrast mode is enabled and from using the display it occurs to us that the quoted 1,200:1 contrast ratio could well be derived from this mode being enabled because black levels are by no means astonishing, quite the opposite in fact. Also, as is the case with many of these dynamic modes, it destroys detail at the darker end of the colour scale and washes out colours too. In short, it’s not very good.

To begin testing we ran DisplayMate, our hardcore monitor test of choice, and immediately the many deficiencies of the CMV 222H were plain to see. First, the Dark-Grey Scale showed a number of problems, from distinctly average black levels to some particularly problematic shading issues. A great majority of the shades had a very evident brownish tinge to them, showing a complete lack of purity. As you would normally expect from a TN panel, more subtle tones were undefined too but compared to the lack of accuracy this was a minor issue.

Switching to the Dark Screen, there was some bad back light bleed from both the bottom and top edges of the display. Switching to a white background also revealed a dead pixel, which is never a good sign in these times. At the very least, the White-Level Saturation test wasn’t as bad as its Dark-Grey equivalent, though the more challenging shades faded into the background. Happily, the colour tracking wasn’t quite as bad. Colours certainly weren’t vibrant, nothing like, but the display did manage to reproduce the Colour Scales adequately enough, if not with the same verve and definition you’d see on higher quality displays.


For some video testing we plugged in an HD DVD player through the HDMI port, just to see what it was like. Unsurprisingly, the result wasn’t too encouraging. Colours were washed out, while there was also a significant amount of noise in the image. Slow panning shots also highlighted some noticeable ghosting and smearing, while the less said about the light bleed from the bottom and top, the better. 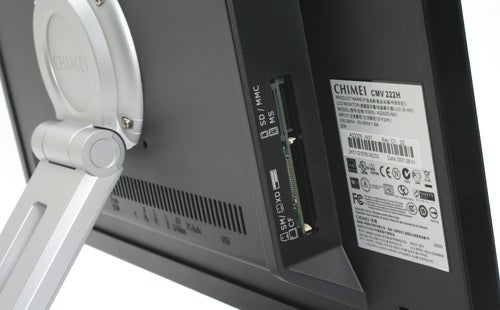 Next we plugged in an Xbox 360 via the component inputs to test its gaming performance, which is certainly the usage the CMV 222H should be best suited to. We played a little bit of FIFA 08 and Sega Rally, with the overriding feeling being that performance was adequate but not outstanding. At its default settings colours were underwhelming, failing to bring environments to life. Bumping up saturation did allay this somewhat, but in reality one ought not to need to do this. However, bearing this in mind, gaming on the CMV 222H wasn’t too bad. Issues such as light bleed weren’t nearly as evident as in the video testing, while motion was predominantly smooth, taking a very keen eye to spot any obvious ghosting or smearing.


Indeed, this is the abiding impression behind the Chimei CMV 222H. Image quality is mediocre at best, so it’s unsuitable for quality intensive tasks such as image editing or watching high definition video. However, for general use and particularly for gaming, the many weaknesses of the display aren’t nearly as apparent. Moreover, given the price and connectivity of the CMC 222H, it’s actually quite a good option for a gamer who needs something cheap and flexible to use with both a PC and Xbox 360 and even a PS3 or Wii. 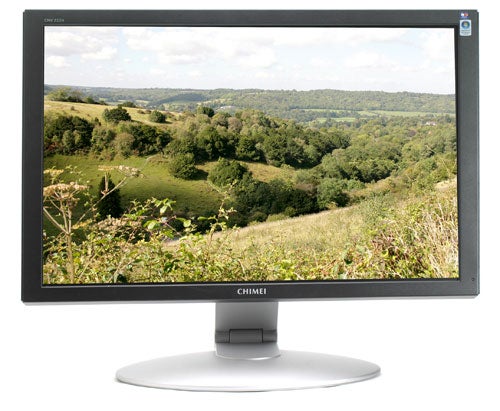 
Nicely designed and chock full of connectivity, the CMV 222H’s many image quality failings are offset somewhat by its plethora of features, decent design and bargain basement price. This makes it a good fit for a PC and console gamer on a very tight budget, though for anything else it will disappoint.