Chilli Technology’s original Action Cam 1 was primarily a helmet camera. But not every extreme sport involves a helmet, or at least one which allows you to attach a camera strap. So the company has devised a new, more flexible version. It’s called the Action Cam Max and it comes in a metal box, so you know it means business.

The Action Cam Max is the same format as the original model. So it’s a bullet camera shaped rather like a hand torch. However, the Max comes encased in a more stylish brushed metal chassis, and the differences don’t end there. Where the Action Cam 1 uses SD memory, the Max relies on microSD, and there’s a 2GB piece of media included in the box. The Max also doesn’t require you to supply your own AA cells, either. Instead, a rechargeable 490mAH battery is built in.


There is one major similarity, however. Neither model has a LCD screen for you to see what the camcorder is pointing at, or view your recordings after they’ve been made. In fact, the Max doesn’t even have the LCD status panel like the Action Cam 1, instead relying on a quartet of tiny LEDs surrounding the single control button on the top. 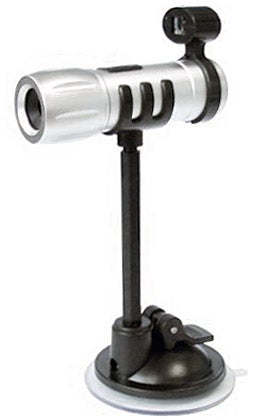 Apart from this button, the Max’s remaining features are hidden beneath a screw-fitting cover at the end of device. Here you will find the microSD slot and a mini-USB socket which is used both for data transfer and recharging. It’s also the location of the power switch. Trigger this, and a blue light appears followed by a yellow light on the top panel. Then the Max is ready to shoot, with a green light flashing to indicate recording in process.


The Action Cam Max can also take still images. Press the record button for three seconds once the unit has initialised, and it switches to digital camera mode. After this, when you press the button on the top again, the Max will take a picture. The resolution is a reasonable 2,048 x 1,536, although the image quality is still not particularly impressive. 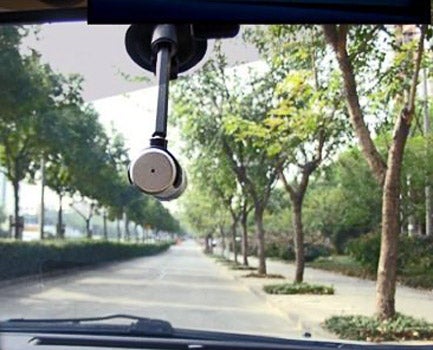 But the biggest difference between the Action Cam Max and 1 is the range of bundled mounting accessories included in the box. Where the original version is aimed purely at helmets, the Max has a much wider set of options. Most interesting is the suction cup monopod, which will allow you to secure the Action Cam Max to a window or other smooth surface. This has a stiff rotating joint, so you can angle the camcorder, and we found the adjustability made it possible to attach the Max pointing forwards on every windscreen we tried. The only downside is that the camcorder itself will end up being upside down. But the mounting is secure enough for quite spirited driving, and you can flip the video the right way up during editing, making the Max a decent track day option.

A bracket is included for attaching the Max to a bike’s handlebars. This has a rotating head, so you can use it to connect to all manner of rods. There’s still a helmet band, too. The band itself is more elaborate than the Action Cam 1’s, making it a little easier to attach to a wider variety of helmets. However, the camera attachment is just two rings of elastic, so you can’t rotate the device to point in a specific direction, meaning that you will need to be facing directly towards your subject matter. 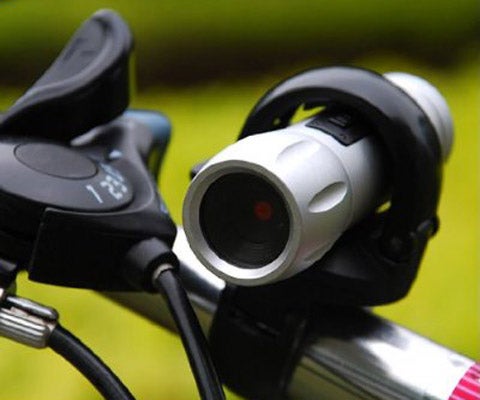 The final inclusion is an external viewfinder. This attaches to one end of the camcorder, but we’re a little nonplussed by its design. Whilst a ridge on the Action Cam Max prevents the viewfinder from slipping off, there’s nothing to stop it from rotating. So it won’t give you precise framing, just an indication of the basic direction in which you’re shooting.


The Action Cam Max has a reasonable internal specification. There’s a 1/4in CMOS sensor with 3-megapixels, which is sizeable for a budget camcorder. Video is recorded at 640 x 480 and 25 frames/sec, with a 4Mbits/sec data rate, so the 2GB microSD card will be enough for a little over an hour of footage. This should be sufficient for a decent quantity of extreme sporting activity. 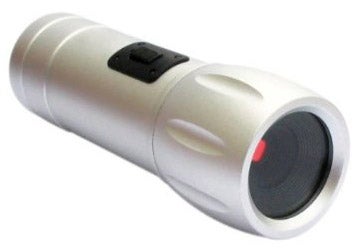 Considering the Action Cam Max’s price and VGA resolution shooting, we weren’t expecting it to produce video quality any better than the first version. But it does manage slightly improved performance. There’s still a slightly excessive amount of sharpening. However, the picture is otherwise reasonably detailed and colour fidelity acceptable. Since the data rate is relatively generous for VGA resolution, compression artefacts aren’t heinous either.


The Max’s abilities in low light are markedly improved over the original version, though. Where the original Action Cam failed our 100W lighting test quite badly, the Max picks up a sufficiently bright image with some colour remaining. The picture is extremely grainy, but at least you can see the subject matter. That said, the quality gets steadily worse below this lighting level, making performance in poor illumination little more than borderline.


The video is recorded as AVIs. We found the files could be imported into all the editing apps we tested. So editing your Action Cam Max footage shouldn’t be a problem, unless you’re using a Mac.


We quite liked the original Action Cam, mostly because its price is so low you only need to use it a couple of times to be worth the money. You could almost buy it for a single special bike trip or skydiving treat. The Action Cam Max costs twice as much, but our conclusion is basically the same. With the plethora of mountings included, though, you will be able to put this model to work in a greater range of situations. So, whilst image quality is no match for premium specialist extreme sports camcorders, if you just want to grab footage in a variety of situations hands free, the Chilli Technologies Action Cam Max gives you plenty of options for a keen price.