When it comes to technology, smaller is better – or at least usually more desirable. Unfortunately powerful gaming PCs tend to be big, hulking brutes, like the DinoPC 6th Sense. This is why the Award-winning Cryo Nano came as such a pleasant surprise: it was a system that didn’t compromise on power to achieve its relatively small size. 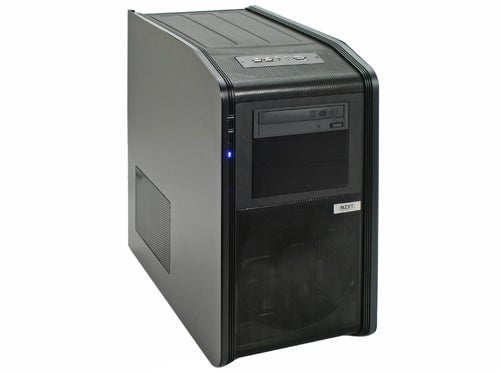 Now we’re looking at the Chillblast Fusion Panzer, a machine that straddles the line between ‘compact enough to carry around’ and ‘big enough to allow for full-sized motherboards’. Interestingly, it not only offers very similar specifications to the Nano – including an overclocked Core i5 750 processor and Radeon 5850 video card – but demands a very similar price of £985. Though the Chillblast doesn’t offer water-cooling, you do get a larger hard drive and more significantly, its motherboard offers support for USB 3.0 and SATA 6Gb/s – a significant advantage in terms of future-proofing.


Chillblast’s smallest gaming machine achieves its relatively diminutive dimensions by using NZXT’s Panzerbox case. With dimensions of 24.5 x 45.5 x 45.5cm, this mostly aluminium mini tower is around 10cm shorter and shallower than your average full-tower PC case yet is about the same width. The effect is a case that looks considerably smaller than it actually is (it is in fact about the same height and depth as most mid-tower cases but 10cm wider). The top and most of the case’s front are mesh, separated from the matt metal side panels by subtle plastic rails. It feels very solid yet still remains the lightest gaming PC we’ve reviewed after the CyberPower Infinity i5 Hercules SE. 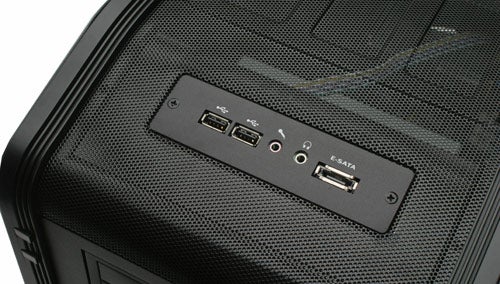 Despite its overall impression being positive, the outside of the case does have its bad points too. General build quality is excellent, but the tiny power and reset buttons (which ideally shouldn’t be the same shape and size) are alarmingly wobbly. They don’t actually feel like they’re going to fall off and they have a nice strong springiness to their action but the overall impression isn’t good.


Likewise the removable panels are held in place by regular screws rather than thumbscrews. It’s a long time since we’ve come across an enthusiast case that didn’t offer tool-free panels, and thus it’s annoying to have to get out a screw-driver just to open it up. Worst of all, this is actually Chillblast’s fault, as the NZXT Panzerbox originally comes with thumb-screws, making the entire case tool-free. Note to PC assemblers: don’t make cases more difficult to work with than they were originally! 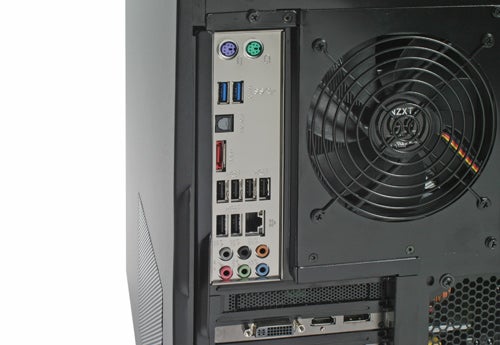 NZXT’s Panzerbox offers three 5.25in front bays, one of which Chillblast has filled with a DVD Rewriter. Thanks to the case’s good selection of top panel connectors and the motherboard used, connectivity of the Fusion Panzer is actually the best of any sub-£1,000 PC we’ve come across. On the sloped section at its top, the case offers two USB ports (unfortunately too close together), silver microphone and headphone jacks, and an eSATA port.

Opening the case up reveals a very spacious if slightly messy interior. Chillblast has done the best job of cable-tidying it can, but the case doesn’t provide many routing options. The positioning of the OCZ 600W non-modular power supply above the video card explains the Panzerbox’s abnormal width and ensures there’s lots of room around the edges of the full-size motherboard. However, it does of course mean you have to remove it to change a graphics card or suchlike. Alternatively you can avail yourself of the case’s removable motherboard tray, but seeing as you need to unplug all the cables from the front of the motherboard to get it out , it’s still a bit of a bind. 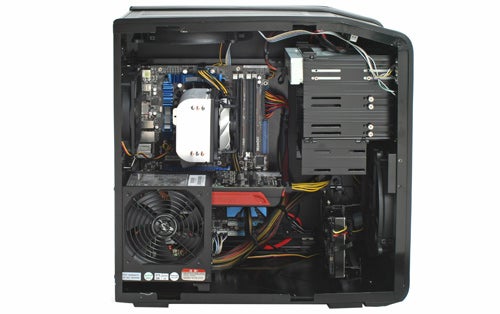 Internal build quality seems excellent, with a nice black finish and no sign of sharp edges. In addition to the tool-free 5.25in cage there are two separate 3.5in cages, and all bays are lined with rubber strips to minimize vibration. Unfortunately, Chillblast has chosen to make use of the bottom (vertical) cage for the Fusion Panzer’s single Samsung Spinpoint F3 1TB hard drive, restricting air flow just slightly from the large front fan (though making it easier to remove).


While on the topic of fans, it’s time to check out the Fusion Panzer’s cooling setup. The case offers two huge 190mm fans, one at the front (intake) and one at the top (output), in addition to a 120mm fan at the back. The power supply exhausts heat directly out of the case. 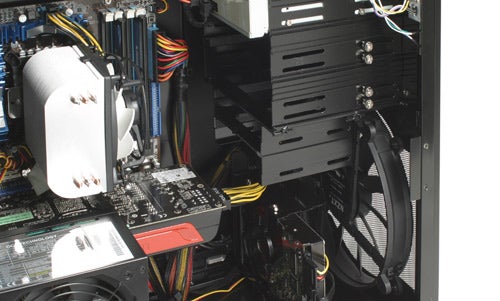 This setup sounds excellent in theory, but unfortunately the reality is very different. The first thing you will notice about Chillblast’s Fusion Panzer when turning it on is that it’s very noisy. Easily the noisiest PC of any description we’ve had through the office, the Panzer would put most vacuum cleaners to shame. Naturally, its cooling performance is astonishing and the huge fans literally blast cool air throughout the case, but deafness is too great a price for even the best cooling.


Luckily, though there are no physical speed switches on the fans themselves, they’re all hooked up to the Asus motherboard. Just pop into the Hardware Monitor and activate Chassis Q-Fan Control in the BIOS, and the noise levels drop down to bearable levels. It’s a very easy fix, but not necessarily obvious for less technically-oriented buyers, and it’s beyond us why Chillblast didn’t just activate this in the first place. At best, it’s a sign of poor quality control. 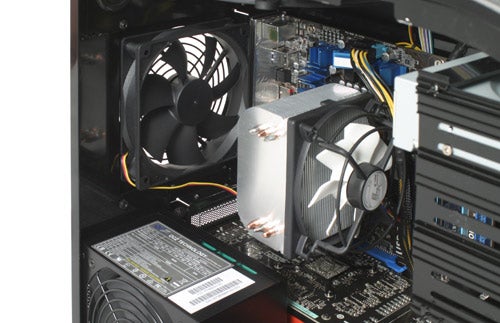 Intel’s Core i5 750 CPU is paired with an Arctic Cooling Freezer 7 Pro, which keeps all four cores below 60 degrees even under load, despite being overclocked to 3.6GHz (from its stock 3.2GHz). This a relatively minor overclock compared to the 4GHz we’re used to seeing (on the similarly-priced Cryo Nano and Wired2Fire Hellspawn, to name but two), but thankfully the 750 is already an eminently capable CPU at stock speed, leaving the onus almost completely on the graphics card when it comes to gaming.

Chillblast has backed up the CPU with 4GB of Corsair XMS3 1,333MHz DDR3 RAM, which is pretty much par for the course, though competitors sometimes use faster 1,600MHz memory (a £20 upgrade in this case, with 8GB of 1,333MHz RAM setting you back an extra £90). A clean install of Windows 7 Home Premium 64-bit takes full advantage.

Anyone who has been reading our gaming PC reviews will know that the AMD/ATI Radeon 5850 is one of our favourite video cards at the moment because of its excellent performance, frugality and reasonable price, so we’re glad to see it in the Fusion Panzer. 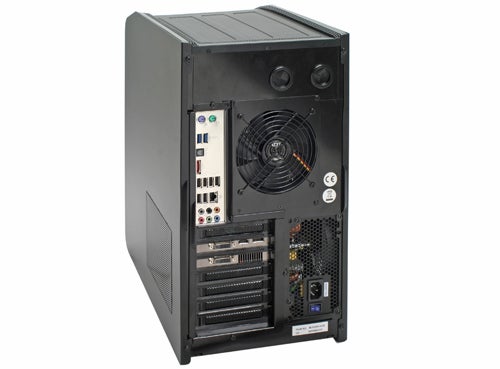 Unfortunately, though it offers two free PCI slots and two PCIe x1 ones, the Asus P7P55D-E LX motherboard Chillblast has opted for doesn’t provide a second graphics card slot, so CrossFire is out of the question. If this is a more important consideration for you than USB 3.0, you’re better off with the Cryo Nano.


Thankfully, a single 5850 is plenty to power through all but the most demanding games. At Very High detail it could barely handle Crysis, providing a just playable 27fps average. Knocking detail down a notch, however, resulted in a smooth experience.

In the DirectX11 title Stalker: Call of Pripyat, the Fusion Panzer had no trouble running the game maxed out.

With older games like Call of Duty 4, of course, there’s power to spare and then some. Keep in mind that the Fusion Panzer outperforms some systems against which it should be scoring lower, simply because AMD/ATI keeps updating its drivers to wring better performance from its graphics cards. Thus the Panzer returned a better score in Crysis during our tests than the DinoPC i7 Osaurus which sported a Radeon 5870!

To sum up, what Chillblast has produced should have been a great little system: it looks good, is fairly well built, relatively portable and offers decent performance and value. It’s also one of the few sub-£1,000 systems to offer USB 3.0 and SATA 6Gb/s, for what the latter is worth. However, the overclock isn’t as high as we’re used to and the assembler has made a few puzzling configuration choices. These include removing the case’s original thumb screws, and while we can easily forgive the Panzer’s unbearably noisy out-of-the-box performance as it’s easy to fix, even with the fans set to the quietest setting Asus’ BIOS supports this is one loud computer.


Thus, if you don’t mind a larger system, we would recommend the Wired2Fire Hellspawn instead, which offers nearly identical specifications yet a higher overclock on its Core i5 750, a Blu-ray drive and card reader, all for less money. 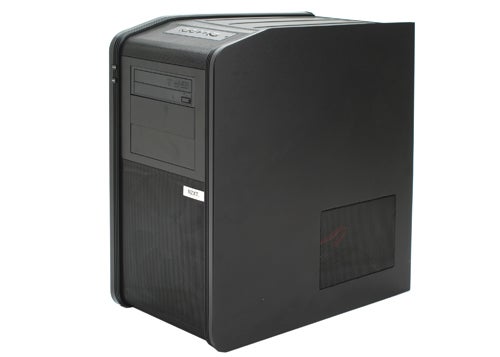 If small is your thing or you’re particularly interested in upgrading to CrossFire in the future, the water-cooled Cryo Nano should be your weapon of choice. Don’t forget that either system will allow you to install an add-on card to provide USB 3.0.


Chillblast’s cute and generally well-performing Fusion Panzer squanders some of its potential due to a lack of care both in some elements of its assembly and its acoustic performance. Frankly, for many it will be one to avoid, unless you don’t mind a noisy system or are happy getting a separate fan controller.