If you're wanting a keyboard from a manufacturer with a reputation as long as your arm, the MX Board 1.0 ticks all the right boxes. It has some brilliant keyswitches and offers a sturdy build, too. What's more, you can pick it up for a reasonable price.

Following on from the MX Board 6.0 and the longstanding MX Board 3.0 comes the all-new MX Board 1.0. Retailing at around £80, the MX Board 1.0 butts up against the Alienware AW768 and the Logitech G910 Orion Spectrum, offering some of the market’s most reliable key switches from a recognisable manufacturer.

Cherry MX Board 1.0 design – It may be plastic, but build quality is superb

Like many products at this price, the MX Board 1.0 is mainly of plastic construction, with metal dispersed in between. It sports a two-tone plastic finish: matte black on top and a silver on the underside. Bouncing off that black plastic housing is a nicely applied metal Cherry logo. Being German-made, the MX Board is the cornerstone of reliability, with the plastic body suffering minimal flex. Top marks there.

A wide shot of the MX Board 1.0, showing its robust plastic construction

Cherry has chosen to work with a closed housing, similar to Razer’s new BlackWidow, opting for sharp-looking edges on the casing. There’s a remarkable similarity in style between the MX Board 1.0 and the newest revision of Razer’s own veteran model. Personally, I prefer the simple finish of the Cherry MX Board – although a metal top-plate would have been nice.

In a similar vein to previous efforts from Cherry – the MX Board 6.0, for example – the MX Board 1.0 lacks designated lock lights for Num, Caps and Scroll. Instead, it opts for LEDs that activate when a key is locked. If you’re used to the typical lock lights in the top-right corner then this might take some getting used to, but that’s all down to personal preference.

The keycaps here aren’t two-shot moulded, like we’ve seen previously, and the legends are laser-etched into the plastic. Laser-etching involves the legends being burnt onto the individual keycaps for maximum longevity, and so won’t fade or chip off – even after heavy usage. Keycaps feel nice under finger and the typeface Cherry has used looks somewhat futuristic. I’m a fan.

There aren’t any additional macro keys on the MX Board 1.0, but in the top-right corner of the keyboard you’ll find four multimedia keys: the Cherry key (which allows for the locking of Windows keys), as well as Skip Backwards, Play/Pause and Skip Forwards buttons. In addition, there are some other functions that can be enabled using the FN key and some of the F keys: Mute, Volume Down, Volume Up.

Additional macros would have been welcome, considering most rivals include them. Nevertheless, their absence won’t be a concern for general day-to-day usage. Cherry doesn’t specifically market this as a “gaming” product, so some of the missing features can be excused.

Bundled in the box with the keyboard is a plastic wrist-rest, which – although a nice touch – is also made of plastic and feels a little “cheap”. The MX 6.0 was also supplied with a wrist-rest, but it was both magnetic and far more comfortable to use.

The 1.8m cable is both fixed and non-braided, but it does come with an illuminated Cherry logo on the end that connects into your PC which looks pretty snazzy.

With an integrated metal plate running through it, the MX Board 1.0 is impressively solid for a plastic-bodied keyboard and, for the price, is outstanding.

Cherry MX Board 1.0 performance – Soft and tactile, these key switches even work well for gaming

With this all-new keyboard, Cherry is offering two variants of its tried-and-tested MX switches: the MX Browns, or the dampened MX Silent Reds. We were supplied an MX Board 1.0 with MX Browns, with an actuation force of 55cN. Heavier than normal linear key switches, they’re also soft and tactile, meaning there’s a small bump halfway down the keystroke. 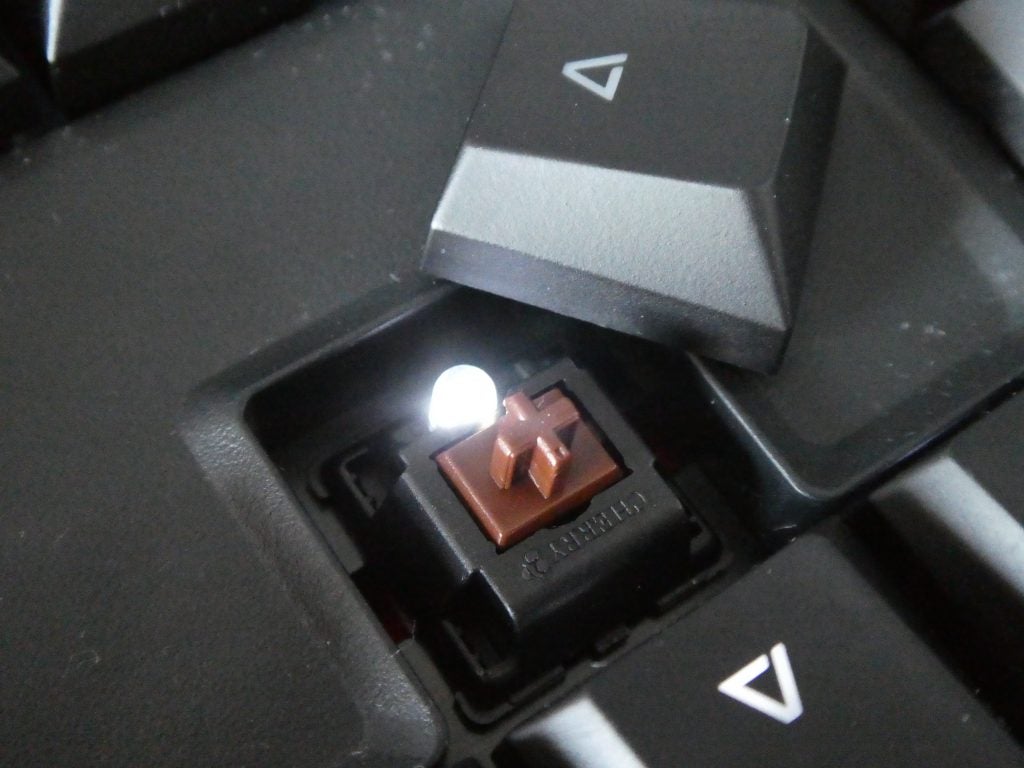 Having used both switch variants of the MX Board 1.0, I’m a big fan of the MX Browns – and for day-to-day typing, there’s no better switch. In terms of how tactile they are, they’re unrivalled, especially when compared with clones from manufacturers such as Kalih and Gateron. The Kalih variants in particular feel inconsistent compared with the MX Browns here.

Despite not being billed as a full-on gaming product, the new MX Board 1.0 features both full N-Key Rollover and anti-ghosting. This is slightly baffling – but, rest-assured that if you want to use this keyboard for a few runs of Counter-Strike, you can. The Browns worked really well through a few rounds of CS:GO; even with the slightly higher actuation force I was able to gun down counter-terrorists more easily than ever before.

Cherry MX Board 1.0 software and lighting – It isn’t blingtastic; but what’s there works well

Unlike much of the competition, the MX Board 1.0 doesn’t feature any RGB goodness or fancy lighting presets. For some, that will be a deal-breaker; but this isn’t officially a gaming peripheral. 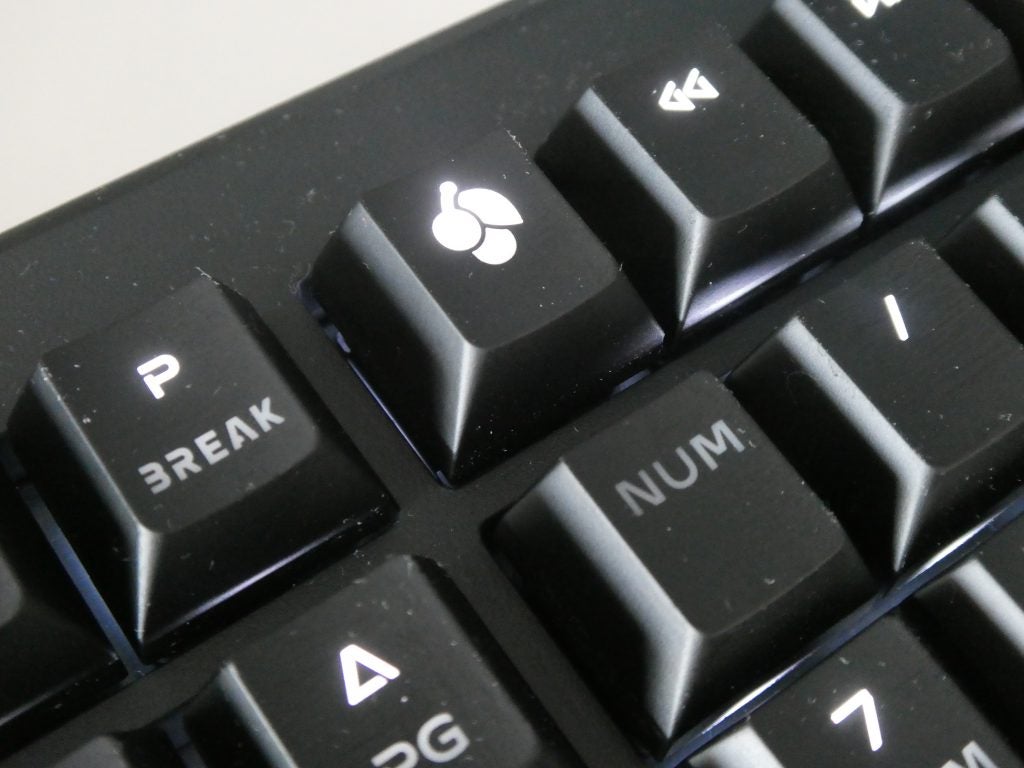 There’s also some sterling white backlighting here on the MX Board 1.0

Instead, there’s a simplistic white LED mounted atop the switch housing. It’s a sharp light and the 100 different levels of brightness can be changed either individually or in ten different increments. That level of freedom puts Logitech’s five stages to shame. The closed housing also means there’s no light seepage.

Should I buy the Cherry MX Board 1.0?

If you’re wanting something from a manufacturer with a reputation as long as your arm, the MX Board 1.0 ticks all the right boxes. It comes with brilliant key switches and build quality is outstanding. What’s more, it all comes to you at a reasonable price.