The Cherry DW 9000 Slim is a rather good purchase if you're looking for something stylish to fit into your office. For a desktop set, it's certainly a versatile product and one that exudes a premium feel right from the outset. The only thing that's really holding it back is that high price, but in the grand scheme of things, isn't such a large price to pay for that reputation and quality.

The Cherry DW 9000 Slim is the popular German manufacturer latest foray into the world of wireless desktop sets.

As time has passed, the firm has moved away from the mechanical boards that they were famous for to suit the new and sleek modern offices.

With an RRP of £90.99, the set is by no means inexpensive, but for a stylish product that’s also functional, it might just be a price worth paying.

The Cherry DW 9000 Slim is available in two dual colour options – a white and silver option (similar to Apple’s Magic Keyboard and the colour of our review unit) and also a nicely contrasting black and gold.

For a desktop set at this price, it comes as no surprise that the DW 9000 Slim certainly looks the part. It’s certainly slim, and feels like a pleasingly sturdy – a metal plate runs through its innards, eradicating any form of desk-flex, even with heavy-handed typing. 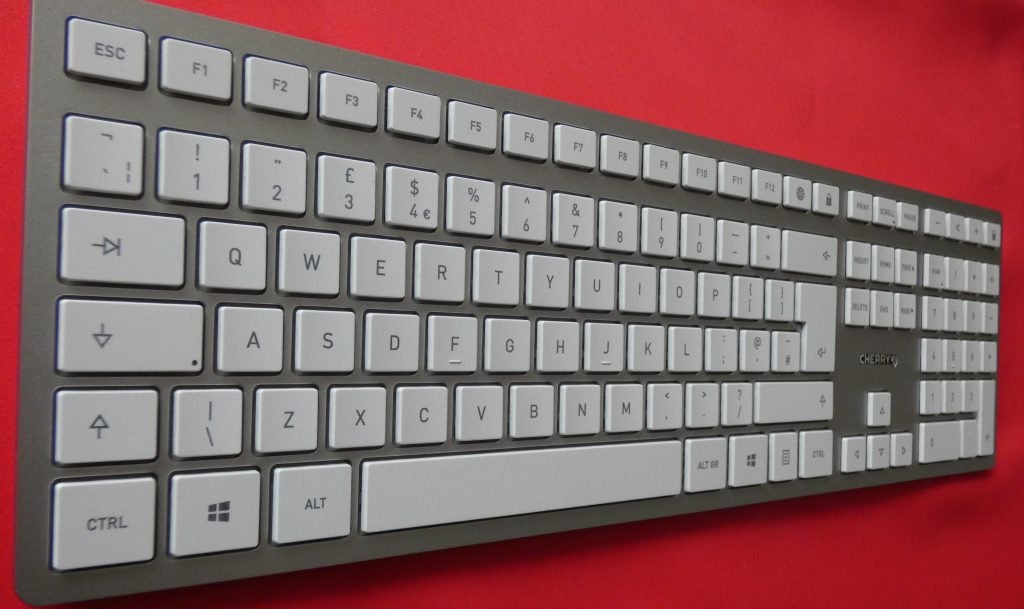 In the box you’ll find four rubber feet that can be used to raise the keyboard of the desk for a more comfortable typing experience. However, these aren’t retractable, unlike those that come with products from other manufacturers.

The keyboard also comes with a closed housing, unlike other slim and skeletal mechanical keyboards such as the Logitech G915 Lightspeed, meaning there’s no room for any dirt or dust to intrude. However, the DW 9000 SLIM isn’t mechanical, so its keycaps can’t be easily replaced.

On the subject of keycaps, the legends on the individual keys are abrasion-resistant – in this case laser-etched. As such, it’s practically impossible for the legends to wear off.

Much like its keyboard counterpart, the DW 9000 Slim’s mouse feels top class, especially given its nicely contoured design to fit in the hand. While the textured scroll wheel and tessellated Voronoi pattern on the sides of the mouse are a nice design touch.

With regards to overall performance, the DW 9000 Slim isn’t designed for gaming, but as a full-on office workhorse instead. During testing, it became abundantly clear that it does just that.

The DW 9000 Slim’s keyboard comes with scissor-actuated keys, in a similar vein to modern laptops. Despite being membraned underneath, it’s the furthest thing away from typing on a wet sponge.

Despite its slim and modern design, there’s consistently more key travel offered than modern laptops, meaning you have far more control over your individual key presses. 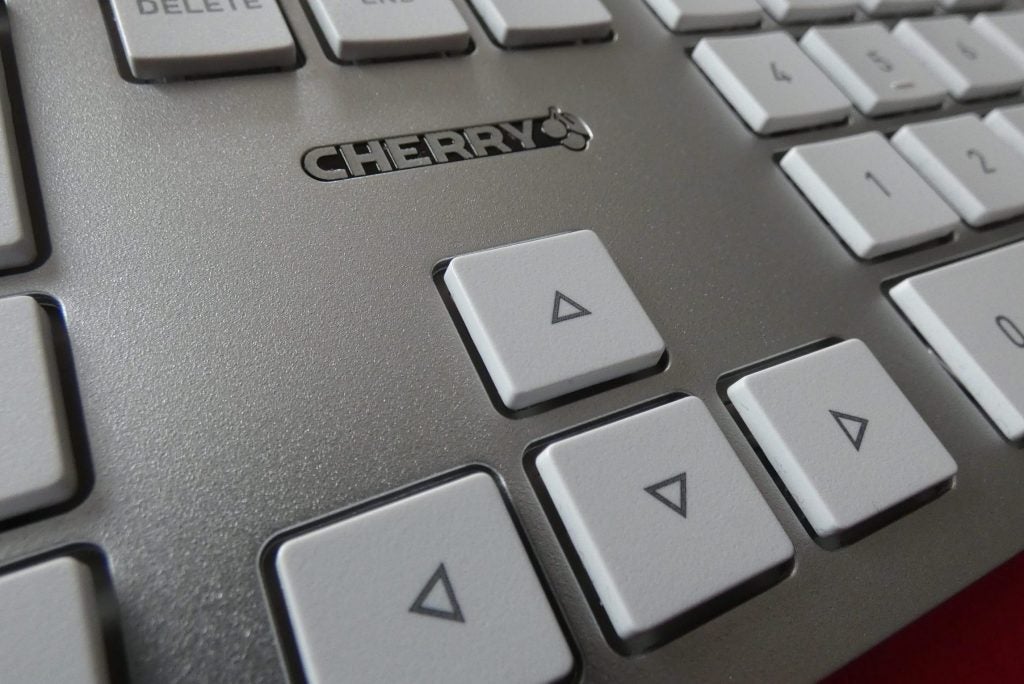 Additional multimedia keys on the keyboard are also a nice touch, making life even easier in a busy office when you’ve got a mountain of tasks to do, as is the Micro-USB charging ability and battery status LEDs that notify you of lower battery charge.

The DW 9000 Slim also offers dual connectivity, with both the provided 2.4GHz receiver and Bluetooth appearing as viable options for set up. With every key press and mouse click comes AES-128 standard encryption to keep all your data safe and protected.

With the mouse, the comfortable design and premium patterns help to make it one of the best bundled mice out there. Since it’s not designed to compete with zany gaming mice, the adjustable DPI of 600, 1000 and 1600 isn’t going to set the world alight, but then again, it doesn’t have to. It’s more than usable in office situations and if anything, lower DPIs can be more user friendly.

In terms of battery life, the DW 9000’s mouse will last anything from 1-3 months dependent upon frequency of usage, and the Bluetooth connectivity will drain it faster than RF. From the keyboard’s point of view, anything from 4-6 months on a single charge. For the DW 9000 Slim, this battery life is certainly outstanding.

Unlike the Cherry KC 6000 Slim, I’m happy to say that there is something to say for the DW 9000 Slim in terms of software and lighting.

Whilst the set offers no full-key backlighting natively, it instead utilises integrated status LEDs on both the keyboard and mouse to notify users of low battery charge. 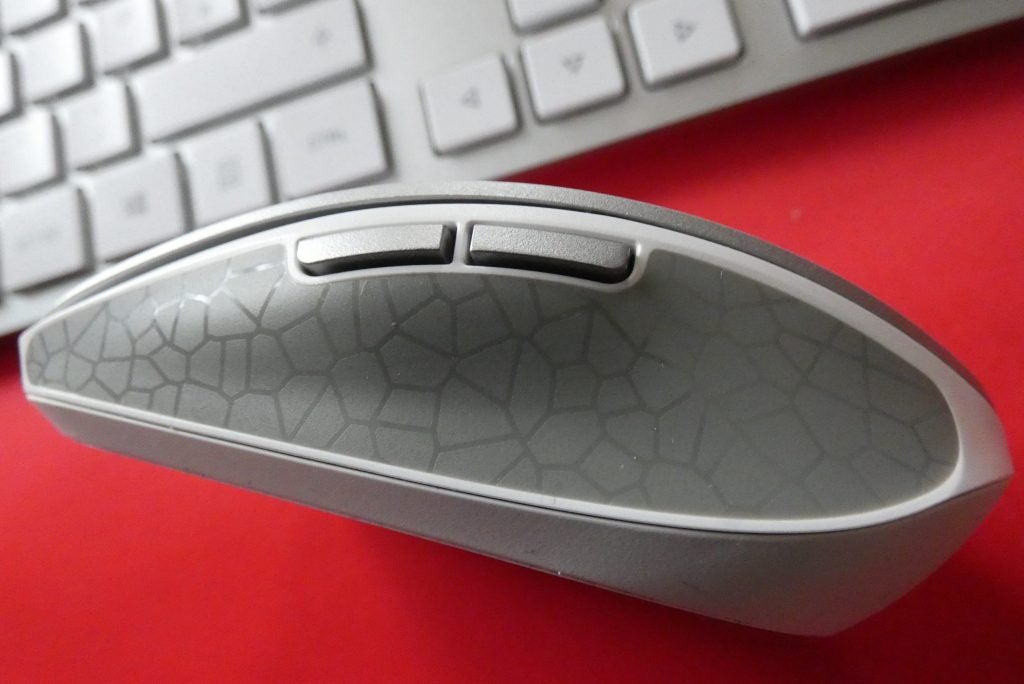 By way of dedicated software, Cherry recently released Cherry Keys, accompanying software that works with both the keyboard and mouse that opens up a lot of programming possibilities for the desktop set. The function keys that the DW 9000 Slim comes with, as well as the multimedia, can be programmed for a whole host of functions that can open documents and system menus, as well as recording macros or playing music.

There’s no doubt it’s a rather good purchase if you’re looking for something stylish and smooth to fit into your office. For a desktop set, it’s certainly a versatile product and one that exudes a premium feel right from the outset.

The DW 9000 Slim perhaps offers reputation against its competitors, with similarly priced products offering slightly different mice, and with this, it’s all down to personal preference. In addition, its option of colour choices makes it a little more versatile than competition from the likes of Dell and Microsoft.

The only thing that’s really holding it back is that high RRP of £90.99, but in the grand scheme of things, isn’t such a large price to pay for that reputation and quality.