Take away the glitz and the glamour of the Premier League, Champions League, World Cup and the host of corporate sponsored mini tournaments during the off season, and what do you have? What, ultimately, is football? Strategy, tactics, and numbers. Lots and lots of numbers.

A manager’s job in 2015 may now extend to keeping a check on the prima donna eccentricities of his star players as they hit the headlines week after week, but on a Saturday afternoon, it’s still a matter of simply choosing the best team to win the match.

And that, even in this modern age, remains a game of numbers, which is why management sims on PC and more recently mobile are so adapt at replicating the ups and downs of the beautiful game. For years now, there’s been a two-way tussle at the top of the table between Sega’s Football Manager, developed by Sport Interactive, and the studio’s former franchise Championship Manager, now handled by Distinctive Developments. 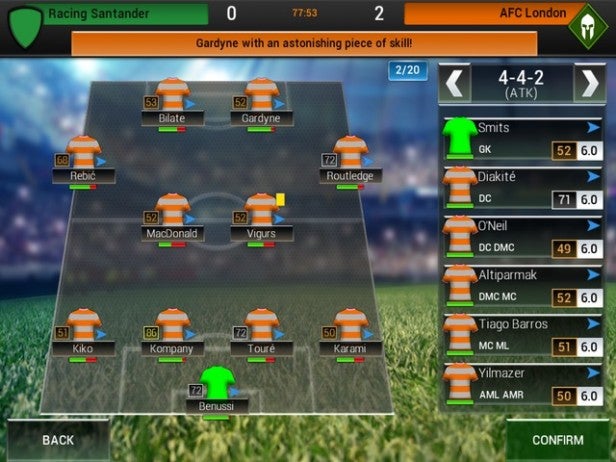 The latter’s attempt to break clear from its near rival is this new ‘All-Stars’ release. It’s a more serious move in on free-to-play territory than the last game in the series mustered back at the start of the year, and one that takes the elements typically found in every management sim under the sun and distils it down to a manner more suitable for the mainstream. If numbers are your drug, however, the question remains whether Championship Manager: All-Stars really ticks all the right boxes.

The balance Championship Manager: All-Stars tries to strike is between a game welcoming enough not to bamboozle newcomers and one with enough bits and bobs to fiddle with to keep stalwarts equally entertained. To do so, developer Distinctive has split the game into two game modes. The meat of the meal, if you like, is the All Star Mode. Here you’re tasked with creating a brand new team, anchored by one superstar player, to take on other teams around the world.

It’s a case of choosing your formation, your tactics and your line-up, and then letting them take to a field in a match described by little more than basic strips of commentary. Yes, Championship Manager: All-Stars makes no attempt to visually illustrate the game, instead falling back on a simple display depicting the areas of the field in play and the share of possession, as well as a rolling stream of commentary snippets. It’s a well established set up but, in truth, it isn’t the most convincing in this case. One match early on saw 25 minutes or more of goalies simply exchanging saves and catches according to the game’s commentary, without any build up whatsoever. 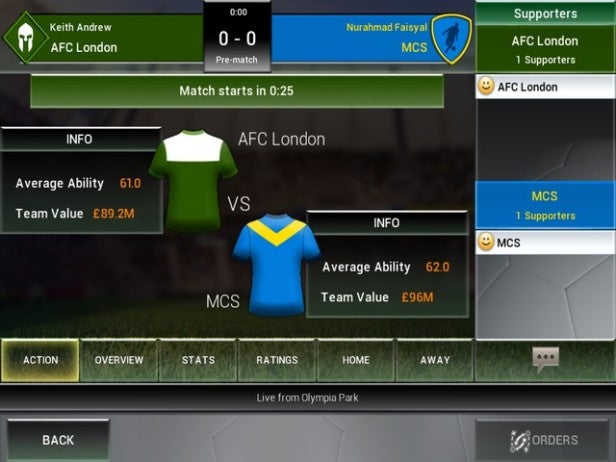 It’s possible, of course, to change your strategy – and, indeed, your players – mid game, though the games actually happen without you, scheduled for a set time each day and running in the background whether you have the game open or not. You get credits for watching, which is Championship Manager: All-Stars’ way of keeping you engaged, but essentially this block runs itself from day to day, though as you move forward, winning matches and ultimately winning leagues, so life gets more difficult and dabble with your team becomes a necessity.

The other half of the game is a little more fruity. Dubbed the ‘Championship Manager Arena’, on offer is Survival Mode – where you build a squad of 18 full of all-stars, picking one player from a choice of three each time to try and build up a balanced and, most importantly, threatening squad before taking on online match after online match to see how many wins you can string together with only three lives at your disposal.

Tournament Mode offers a more standard set up, dropping your team into mixed sized leagues (followed by an additional, final match between the top two teams) and tasks you with winning it. Players can create these tournaments, the amount of credits it costs to enter and the amount on offer for the champion, and it’s here where successful players can build up enough credit to tide them over for the game as a whole.

Indeed, of the two halves of the game, this is most definitely the most successful at offering something new, something engaging that feels distinctively different to other games in the genre. The downside of that, of course, is that it highlights the somewhat plodding nature of the main All Stars Mode, which really feels like it’s not really catered for newcomers, nor specialist enough for football management aficionados. 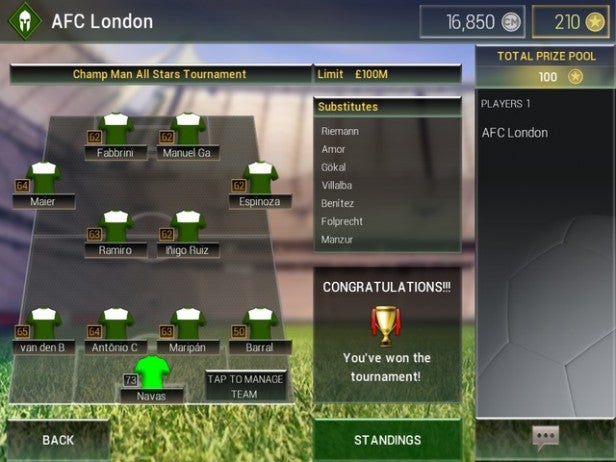 Regardless, as a package, Championship Manager: All-Stars has much appeal and is positively playable, with its online focus already paying dividends in the form of a well-populated player base. It’s perhaps not as radical as it could be – Square Enix and Distinctive Developments would do well to build on the base they’ve formed with some new modes – but it’s still a valid challenger as things stand, fighting for a place in the top half of the table rather than languishing down the bottom.

Verdict
An attempt to make Championship Manager a more palatable prospect for the casual player, All-Stars enjoys much success, with some notable online modes that already boast a sizeable player base. The main meat of the package, however, feels a little dry and perhaps doesn’t quite strike the balance between appealing to newcomers and the committed player at the same time, instead falling somewhere between the two stools.