When reviewing products few things are more enjoyable than being impressed by a company you hadn’t previously come across. This is only amplified when the product in question is entering one of the most brutal sectors in technology today: audio docks.

Design
The name which doesn’t trip off the tongue is Ceratec, a German audio specialist that has previously had little contact with the UK. It has come up with the ‘CeraAir Two’ and out of the box impressions are immediately positive as the dock is a stunning piece of design.

The tubular form factor (67 x 16 x 16cm) is machined out of anodised aluminium giving it weight (6Kg) and the unmistakable feel of quality. Pressing this point further are polished stainless steel speaker and bass ends while the drivers are covered by punched honeycomb steal with premium fabric finish. Black, white, silver and red are the default colour options, but Ceratec offers a personalisation service where any RAL colour can be chosen for an extra charge. A further nice touch is the base doubles as a bracket allowing it to be easily wall mounted.

The overall effect is better than any speaker dock we have seen and even outdoes the iconic design of the Bowers & Wilkins Zeppelin Air. Rivals take note. 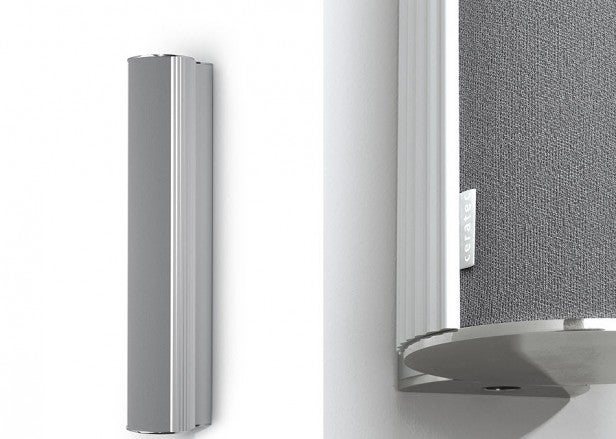 Features
Whereas Ceratec has gone to town on the CeraAir Two’s styling its functionality is more streamlined. Discretely positioned under the base are just the power socket, a bass adjustment dial and two 3.5mm jacks – one to connect an optional subwoofer, the other for AirPlay. Yes AirPlay. As is often the case with AirPlay docks, the inclusion of Apple’s lossless wireless streaming standard is hinted at in the product’s name and here the CeraAir Two is no different, but how it is implemented certainly is.

Unlike most AirPlay docks the CeraAir Two’s AirPlay is not integrated. Instead Ceratec supplies the dock with Apple’s latest AirPort Express peripheral. While this is a bit of a cheat, it does actually work brilliantly. While the bundled AirPort Express unit is the boxed retail version complete with all cables, Ceratec has neatly woven both a 3.5mm optical cable and power cable for the AirPort Express into the dock’s main power cable meaning you need just a single socket and cable for both.

Given the AirPort Express can also extend the signal of your WiFi around the home (using its WAN port) and connect a further device via AirPlay (using its Ethernet LAN port) such as a printer, another speaker, PC, etc you are getting bags more functionality than if AirPlay was built in. Since the AirPort Express costs £79 from Apple that is a cost to factor in as well.

Performance
So what is under the hood? Here we hit a potential stumbling point as the 2x 50W drivers and use of passive bass radiators seems a little underwhelming for a dock with the length to pack in far more. There is no integrated DAC either which places greater weight on the quality of your audio files given the sound chip in the AirPort Express is fairly basic. You can connect the AirPort Express to a DAC and subsequently connect that to the dock, but at this point cabling will become messy.

It is therefore good news that in practice the CeraAir Two is an admirable performer. As has become fashionable in the last few years Ceratec has opted for a warm, bassy signature with bags of midrange. Our unit arrived with the bass turned up to max, which will be overpowering to all but the biggest of bass fanatics, but adjusting it reveals a dock which manages to marry depth and power to great effect.

Where the weakness lies is the high range and it means when presented with more complex or delicate genres like classical music and jazz the CeraAir Two lacks detail. We suspect Ceratec recognises this as removing the dock’s speaker grill reveals the drivers are embedded in a special sound absorbing foam. These are designed to reduce vibration and consequently avoid further suppression of the high range. In fairness only audiophiles will complain, but side by side with the Monitor Audio i-deck 200 and Arcam rCube in particular this is noticeable.

A further issue is the volume of the CeraAir Two. The dock’s volume is locked to that of the source and there is no remote which means quieter tracks cannot be independently cranked up. As such the CeraAir Two is quieter than most of its rivals, though as a consequence at maximum volume it holds together well and there is minimal distortion. Furthermore while the CeraAir Two isn’t shaking out your windows it will easily reach levels loud enough to annoy the neighbours and well beyond a typical listening volume so it is hardly a deal breaker.

A further point to stress is how well AirPort Express works. Every dock we have tested with integrated AirPlay to date has suffered from the occasional drop out and a typical 3-5 second delay in starting/stopping the audio stream when commanded. This was a notable black mark with the otherwise excellent Audyssey Dock Air and the final nail in the coffin of the Klipsch G-17 Air.

Value
All of which brings us to the question of value. Ceratec has given the CeraAir Two a £499 RRP which places it in direct competition with the Zeppelin Air (£499) and well above established heavyweights like the aforementioned rCube (£350) and staggeringly cheap i-deck 200 (£250). From a pure audio perspective all three of these docks have an edge over the CeraAir Two making it a hard sell. 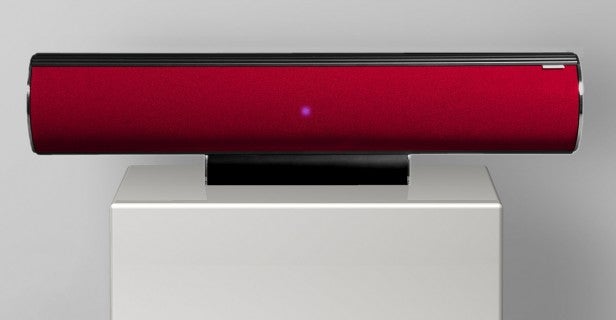 The flip side is it does sound good in isolation and the sheer beauty of the CeraAir Two leaves all other docks standing. Since premium docks are as much about style as audio (proper HiFi speakers with accompanying subs can be bought for less) this factor should not be underestimated.  The greater flexibility of a bundled AirPort Express unit must also be considered, though from this perspective both the rCube and i-deck 200 still come in much cheaper with the Express’s £79 price tag added in.

Lastly, given the CeraAir Two’s soundbar form factor, we think Createc missed an opportunity in not including some form of A/V connectivity while Bluetooth would’ve provided a low cost alternative for those not won over by Apple’s product range. 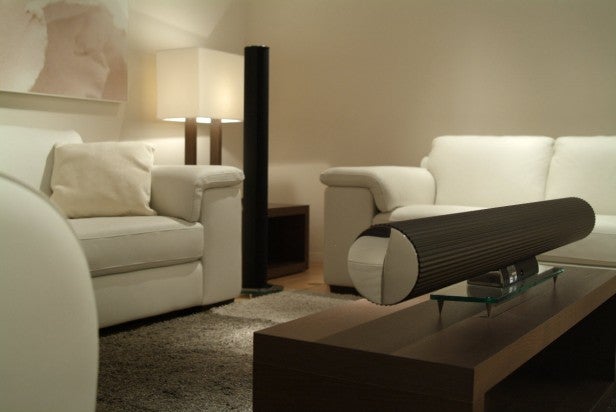 A further point of consideration is Ceratec tells us a near 200W version of the CeraAir Two with BridgeCo’s integrated AirPlay chip is in the works. Whether that will raise the price even further remains to be seen, but if the company can pull that off it might just have a dock to take on all comers…

Verdict
Ceratec deserves a huge amount of credit for producing a dock which truly stands out from the crowd. The CeraAir Two is a beautifully styled, wonderfully built design statement that looks as good – if not better – than any on the market today. Its AirPlay credentials are dubious given they come via a bundled AirPort Express unit, but this adds flexibility and means streaming performance is better than any integrated AirPlay dock. The weak point is performance with the dock sounding good in isolation, but it lacks detail in the high range compared to its rivals. With a high price tag to boot it is therefore a primarily superficial purchase, but we remain hopeful of great things from future generations.