Lots of the big brands this year are making a song and dance about the fancy new online talents they’re building into their latest TVs. But the truth is that they’ve all been beaten to the punch by a much smaller brand. A smaller brand which, moreover, heralds not from Korea, Japan or Taiwan, but good old Blighty.


That brand is Cello Electronics – a company started in 2001 in the North of England, which now boasts a turnover of £40m and came in 42nd on this year’s Sunday Times Tech Track 100 list of the UK’s fastest growing technology companies.


Normally I wouldn’t go into so much detail about the company behind a product I’m reviewing. But the Cello iViewer C3298DVB I’m looking at today is only the second product we’ve ever seen from the brand (the first being the Cello C1973F iPod dock/TV combi last year), so I figured it might be a good idea to make it clear that Cello certainly isn’t some fly by night company pumping out piles of rough and ready TVs from some far-Eastern factory. 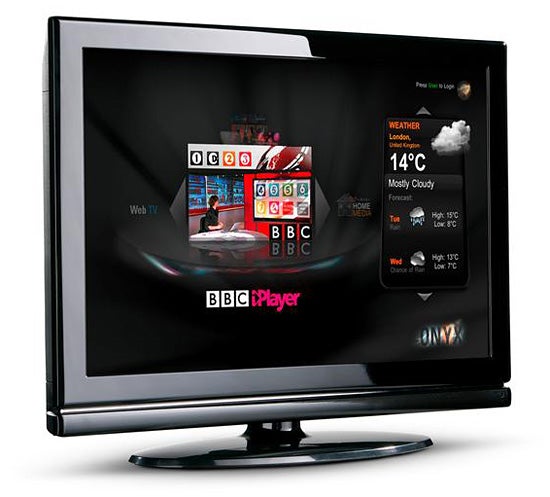 Cello, by comparison, prides itself on the amount of time and effort it puts into R&D – as can be seen by the genuinely innovative nature of the two products we’ve seen from them so far. Strange, then, that the 32in iViewer C3298DVB I tested doesn’t actually have Cello’s brand logo on it. In fact, contrary to the Cello-sourced photos of the TV shown with this feature, it doesn’t have any logo at all; there’s just a glossy black bezel with a slightly separated inch-deep speaker bar hanging off the bottom.


Does this odd state of affairs mean Cello is somehow embarrassed about the iViewer C3298DVB? Actually, no. The reason for the lack of an obvious brand name is that the set is being sold exclusively through Marks and Spencer, with M&S even calling it the ‘M&S 32in iViewer Full HD LCD TV’ on its website – as if it’s all the store’s own work. Clearly M&S decided it didn’t want to confuse/worry its special punters by leaving a relatively unknown brand name on there.


But that’s quite enough back story. It’s high time I got back to the online capabilities mentioned at the start of this review, before you all forget about the TV’s main ‘hook’.


The thing is, the set carries an Ethernet port that you can use to connect to the Internet. And once you’ve done that, you can then access a whole host of ring-fenced online content using a specially designed, widget-based Onyx interface from another British company, Oregan Networks. This is pretty cool in itself, but the real headline feature of the iViewer C3298DVB is that among the content you can access you will find – drum roll please – the much-loved BBC iPlayer service.

This isn’t the first time we’ve seen an iPlayer working on a TV without a PC being attached, of course. I covered in a feature last year how the new iPlayer for Freesat platform was working via Humax’s Freesat PVR receivers. And of course, you can also get the iPlayer via your PS3 or Nintendo Wii. But the iViewer scores a considerable coup by being the first TV to have iPlayer functionality built in, with no external box required. 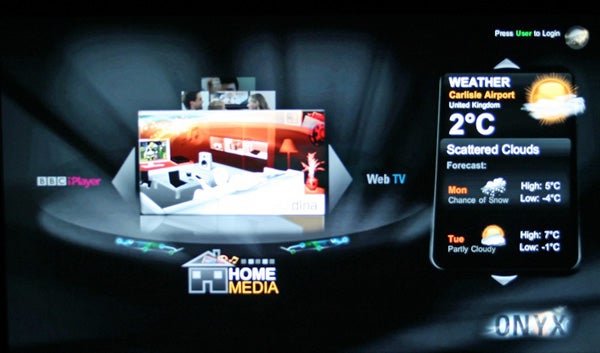 The only problem I noted was that some feeds looked slightly stuttery – so much so that it can lead to some distracting lip-synch issues. It kind of looks like you’re getting every other frame of the picture rather than every single frame. Freesat’s iPlayer images suffer with no such stuttering.


Thankfully this stuttering/lip synch problem doesn’t happen all that often, though, and when it does you can usually improve matters by choosing the lower bandwidth option iPlayer provides. The only catch with this, of course, is that choosing lower bandwidth means having to put up with a really quite drastic reduction in picture quality.


While the iPlayer might be the headline service of the iViewer C3298DVB, though, it’s certainly not the only one. For you can also access content from YouTube, the Disney Movie Previews UK podcast, Autocar magazine, Sky Sports Boots N All, The CNN Daily Video podcast, Jamie’s Ministry of Food Recipes, Delicious TV Veg, Revision3 Diggnation (!), The Larry King Video Podcast, the Discovery Channel Video Podcast, the Uefa.com Magazine, and best of all, the Sesame Street Podcast. Woo and, indeed, hoo. 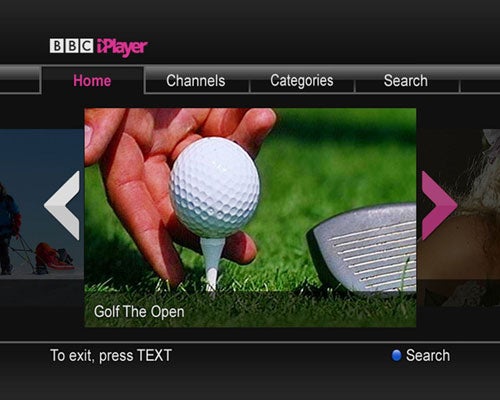 As if all this wasn’t enough on a 32in TV costing just under £500, the iViewer C3298DVB also carries a ‘browser’ supporting streaming from DLNA media servers – most likely your PC, if it’s up to date enough. And there’s more. For if the idea of hard-wiring the iViewer to your broadband router seems too uncool for school, you can also furnish yourself with an optional USB dongle to introduce full Wi-Fi functionality.


With this in mind, it’s nice to find the iViewer carrying two USB ports, so you can use one to play video and stills stored on a USB storage device without having to disturb your optional Wi-Fi dongle.


The iViewer wraps up its impressive multimedia functionality with the now more or less de rigueur PC input. But this isn’t to say that it’s completely satisfying on the connection front, for it only boasts two HDMIs when ideally we’d have liked three.

Actually, the iViewer C3298DVB is pretty damn short of features full stop once you look past its eye-catching online functionality. The perfunctory-looking – and rather small – onscreen menus host practically nothing of interest bar, unless, um, its noise reduction system floats your boat.


The extremely busy looking remote control promises a few more bits and bobs. But in reality, aside from offering control of your satellite receiver and DVD deck, most of its more unusual buttons are to do with either the Internet functionality or the electronic programme guide for its onboard Freeview tuner. It has to be said, too, that the remote’s layout feels rather confusing and unintuitive. 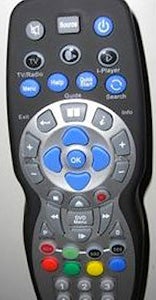 The EPG, at least, warrants a mention, for it’s actually quite effective, presenting information clearly and keeping a small version of the picture running in the top right corner.


Regular readers might remember that the Cello iPod dock TV I mentioned earlier was rather let down by its picture quality. And so, to some extent, is the iViewer C3298DVB – though perhaps not totally disastrously so. 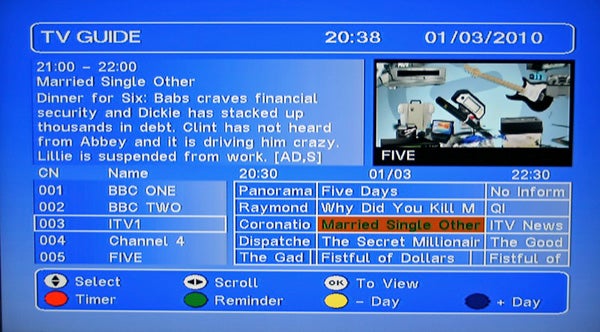 
Colours while watching standard definition also leave much to be desired, with numerous tones failing to look natural and precious little finesse when it comes to portraying subtle blends. This leaves pictures looking rather flat and skin waxy.


Thankfully for the iViewer, though, it delivers much better results with HD sources. Free from the need for rescaling processing, HD images actually look quite sharp and detailed. This sudden sharpness also gives me the chance to appreciate how surprisingly little the iViewer suffers with LCD’s motion blur problem.

Colours improve with HD too, in terms of both the naturalism of their tones and the subtlety with which blends are delivered. And as is usually the case where decent colours are to be found, the iViewer C3298DVB manages to produce a solid black level response.


When I say solid black level response, I don’t mean brilliant by any means. There’s clear evidence of greyness hanging over the darkest scenes. But the extent of this greyness isn’t as bad as I’d anticipated, leaving dark scenes looking at least credible. What’s more, dark corners don’t look as hollow and detail-light as I often see when cheap TVs try and go black. In fact, the iViewer C3298DVB does a really decent job of retaining some pretty high brightness levels even during dark scenes.


Clearly you can get more colour range, contrast and general subtlety from HD sources if you go for the best TVs right now from the big brands. It also has to be said that while pretty accomplished when it comes to motion blur, the iViewer falls prey quite markedly to that other common LCD motion problem of judder. 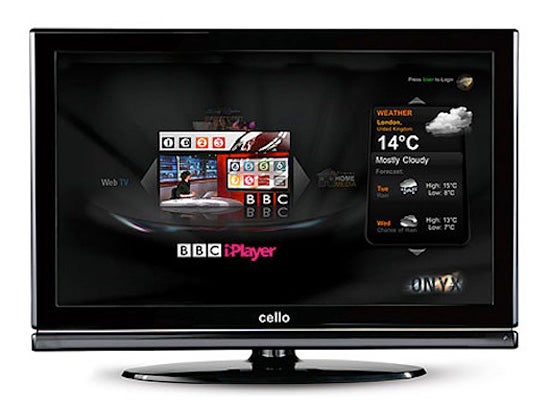 But the fact remains that overall the iViewer’s HD pictures are as surprisingly good and natural as its standard def pictures are predictably average.


I’d hoped when I first noticed it that the ‘speaker bar’ running along the iViewer’s bottom edge might deliver some potent audio. But actually it sounds every bit as fundamentally average as almost every budget 32in TV I’ve seen, thanks to all the sound having to be crammed into a really compact mid-range area. There’s precious little treble detail of note, and attempts to reproduce bass are half-hearted to say the least.


Actually, it’s a good job the iViewer C3298DVB doesn’t try too hard to serve up bass, since it doesn’t take much low frequency information at all to cause the speaker to distort and buzz. Even a fairly standard male voice can cause the speaker to break down if you’re running the set at any sort of volume.


It’s a little bit tricky to know what to make of the Cello iViewer C3298DVB LCD TV. On the one hand it genuinely breaks new ground for the UK TV market, with some imaginative, thoughtfully organised/interfaced and useful online content that leaves most of the more established TV brands looking a bit off the pace (though some of them, at least, are going to catch up pretty soon). What’s more, it offers this functionality at a reasonably aggressive price, and even manages to produce some likeable HD pictures.


The catch is that its standard definition pictures and sound are both pretty unimpressive – issues that could both frequently rear their ugly heads in the second-room environment we suspect most people will be thinking of using the iViewer in.