The 4K picture performance is reassuringly sharp from this Cello QLED, but HDR is an issue

Cello is that rare thing, a British TV manufacturer, and the Cello C55SFS4K is its first flatscreen to use a QLED (quantum dot) LCD panel – technology hitherto championed by Samsung.

The set is a significant upgrade on what we’ve seen from the TV maker in the past. Cello is a specialist in low-cost and niche TVs, with its range including small-screen smart models, battery-powered portables for caravan and camping use, and even transparent models for the prison service). But this 55-inch TV adopts a premium design and boasts an upgraded smart platform.

There’s no doubt that this QLED panel is nicely dressed, with its shiny aluminium bezel and trim, metallic crescent stand. The remote control is unusual in that it pairs and operates over Wi-FI, to offer a mouse-like navigating experience. Only the Power command is IR. To call up its on-screen cursor, just engage the Mouse button. If you hold the OK button then you can drag items, which is required functionality for many apps. 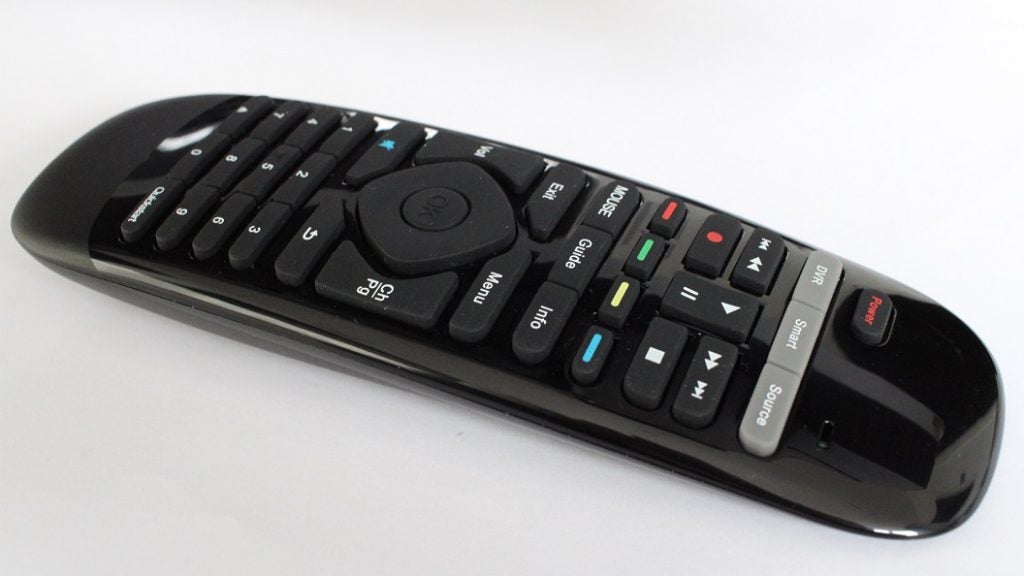 With a 9-axis gyroscope, this zapper isn’t dissimilar to LG’s Magic Remote. It takes a little getting used to, and more than once had me hankering for a scroll wheel – but I got there in the end.

There are four HDMI v2.0 inputs on the rear. There’s also a mini-AV 35mm jack, a digital audio output for an external sound system, and a pair of stereo phonos. Also included are a couple of USB ports and a microSD card reader. The latter can be used to pause live TV and for basic time-shifting, depending on the capacity of the card in use.

Obviously connected, this screen runs an iteration of Android 7 Nougat, accessed via the dedicated smart button on the remote.

The interface isn’t fancy, and certainly isn’t as graphical as the TV-orientated version of the same platform that’s been around for some time, but it has unique appeal. 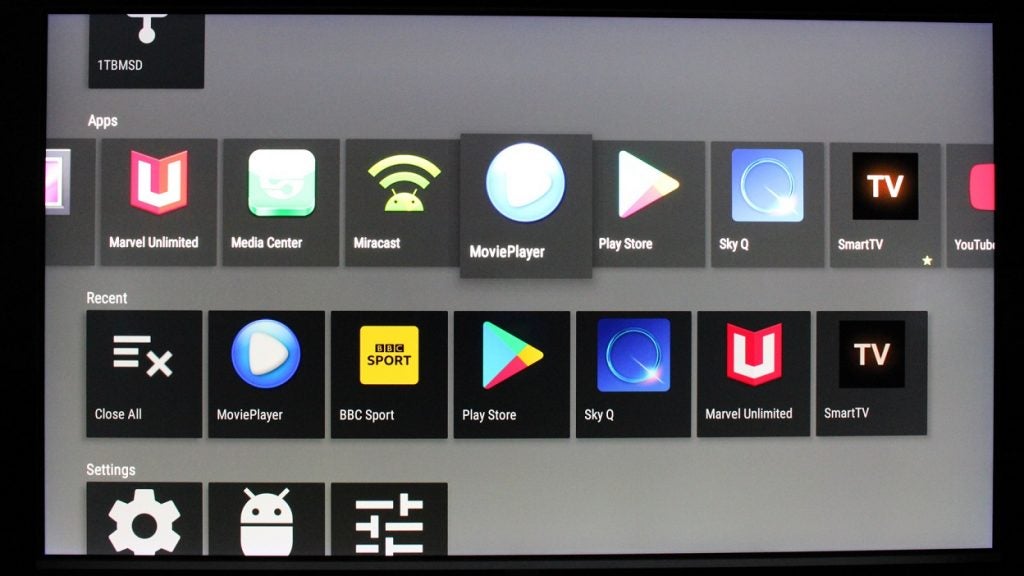 You see, this QLED offers unfettered access to the Play Store, which has big ramifications when it comes to usability. The screen invites you to install the usual apps, including YouTube, Netflix, BBC iPlayer, ITV Hub, Sky Go and Now TV. But exploring the Play store will unlock surprises.

For example, you can download the Sky Q app, designed to allow Sky Q subscribers to watch content from their Sky Q box on a mobile device. For legit multiroom TV viewing, Sky requires subscribers use a Sky Q Mini client box, and only three can connect at once.

But this Cello’s ability to run the Sky Q app means you don’t need a Sky Mini to catch up on recordings on your box. This is desirable if you’re a Sky Q subscriber buying a screen for a second room, bedroom or den. 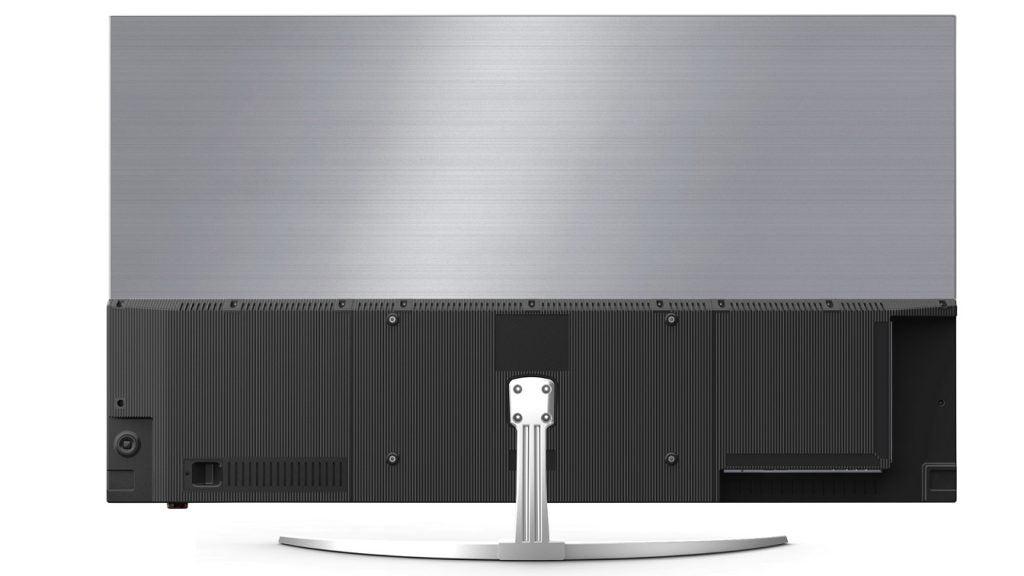 On the debit side, the Play store apps for Netflix and Amazon Prime are basic, with no 4K support. The solution is to partner this screen with a streaming media stick – be it a Roku or Amazon Fire TV – in order to get the best user experience from the big OTT providers. Then use Android 7 for more sneaky viewing opportunities.

The platform itself is quick to navigate; apps load and open swiftly.

The HD DVB tuner is branded Cello Play, which looks a little like Freeview Play in that it offers a rollback EPG. However, rather than link to channel players for catchup, it scrapes YouTube and IMDB, which is… different.

Picture quality is fine, with caveats. The panel has a resolution of 3840 x 2160, and all this detail makes it to the screen. It’s also compatible with HDR10.

HD images enjoy a linear upscale, with no obvious stepping and jaggies.

Like all Cello TVs, the menu system and picture options are limited. If you want a panel you can tweak and finesse, look elsewhere. Picture presets cover Vivid, Standard, Soft, Monitor and User; if you plan on making adjustments, you’ll need to alter the menu time-out from its default of 10 seconds. There’s no dedicated Movie or Game mode. 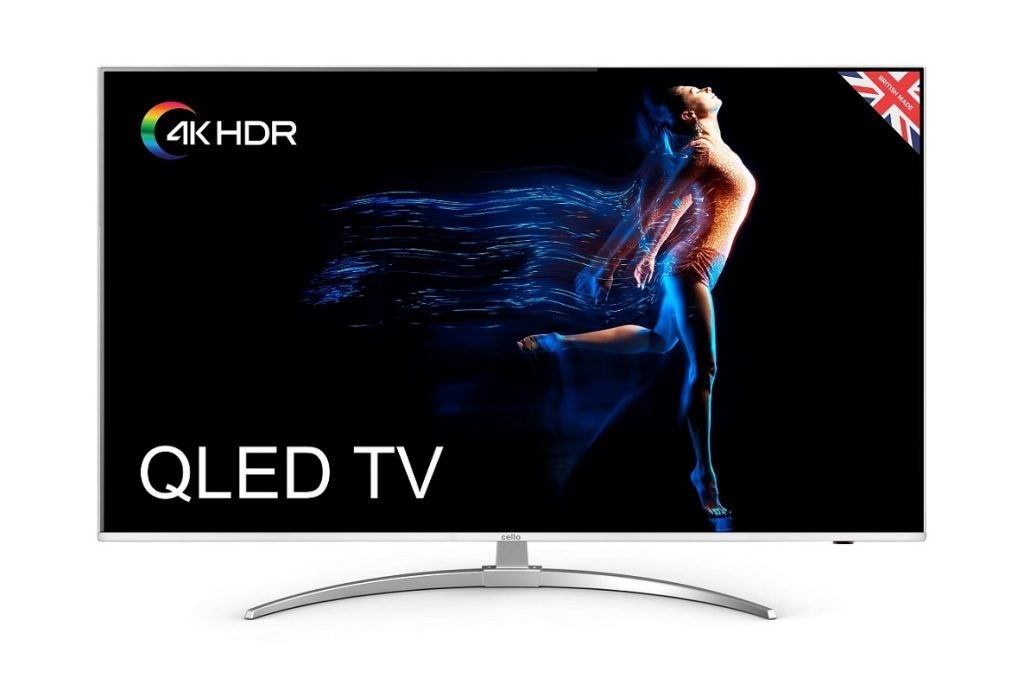 Standard is the best viewing option. The Vivid mode represents a jump in overall brightness, but doesn’t hold contrast well, which gives images a washed-out look. The oddly named Soft is overly dark.

An edge-lit set, the panel is backlit from the bottom. When watching letterbox movies, the top bar is consistently dark, while the bottom bar suffers from grey splotches.

This panel doesn’t offer wide-band colour. This isn’t to say it doesn’t have vibrancy. The early kids party in Despicable Me 2 (4k UHD Blu-ray) is a feast. Drew, in his pink fairy attire, is a definite crowd-pleaser. 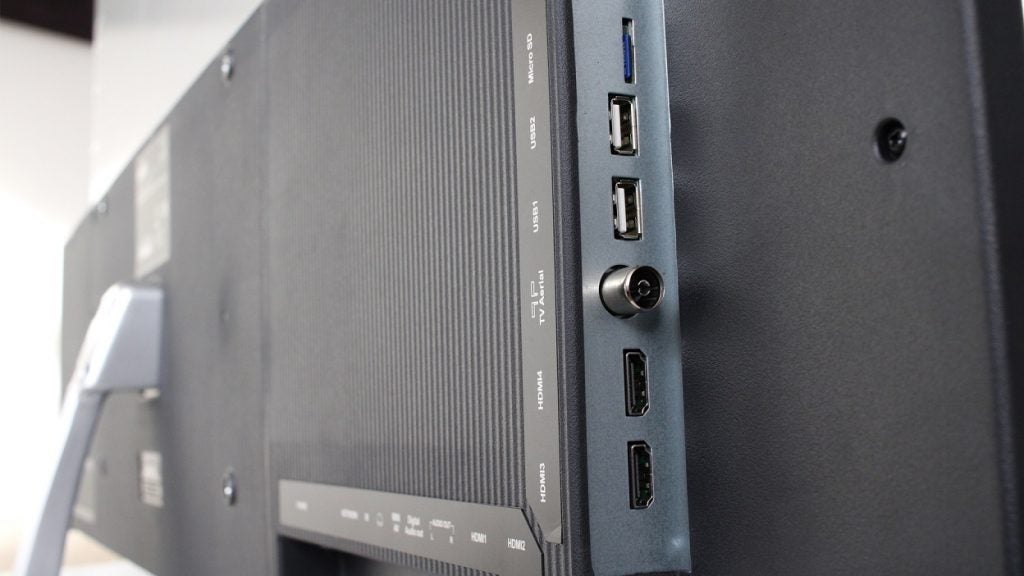 The set may be HDR compatible, but don’t expect a particularly HDR-like experience. We measured peak HDR at just 285 cd/m2 (aka nits), on both 10% and 5% windows. This is considerably less than Philips’ low-cost, 6-series HDR screens, for example.

I suspect Cello is locking this down in order to secure its A energy rating (99W with a 145 kWh/annum certification).

There are multiple audio modes: Standard, Music, News, Movie and User. All are rather confined by the on-board sound system. You’ll almost certainly want to add a sound bar or external sound solution.

This isn’t a screen we’d recommend for gamers. Input lag was measured at 66.3ms, which is poor.

Why buy a Cello C55SFS4K QLED?

A lot depends on what you’re looking for. This Cello QLED isn’t a high-performance HDR offering by any stretch, but having unconditional access to the Google Play store is a big win.

As a second screen in a Sky Q household it holds obvious appeal, thanks to its ability to run the Sky Q mobile app.

Cello’s QLED debut combines a premium ultra-slim design, with a versatile Android platform that offers backdoor access to apps originally intended only for mobile use.