The Cello C32227T2-S2 might just be the most unusual TV I’ve ever tested. For starters, it’s a 32-inch set that can run on a built-in battery. It also comes with a car charging adapter and a digital aerial. Two of its USB ports can be used to charge your mobile phone. Most unusually of all, it ships with two wired LED bulbs.

Put all this together and it’s clear this is a TV aimed first and foremost at campers. Surprisingly, it also performs well enough to be a decent second-room home TV, too. 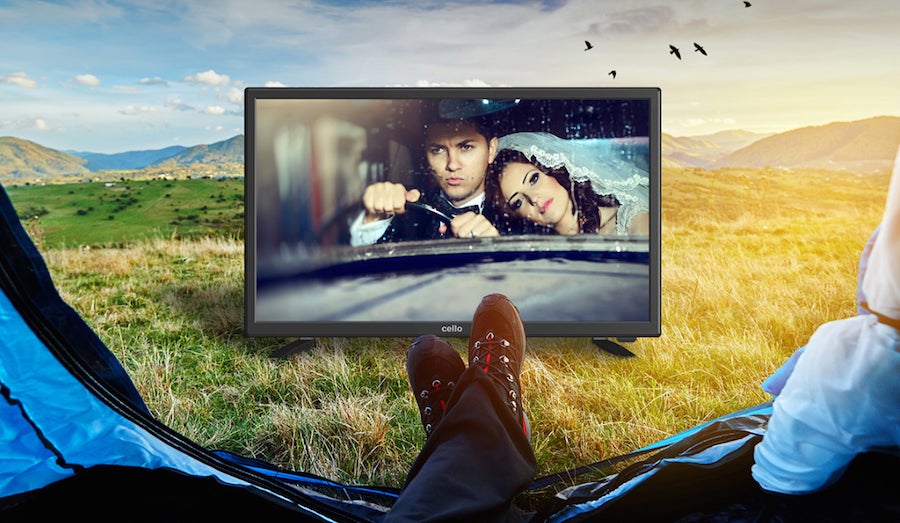 The C32227T2-S2’s design is… functional. The screen’s dark grey frame is too plasticky to be stylish.

Its rear is both far chunkier (94mm) and far more plasticky than we’re used to seeing with today’s TVs. Then again, most TVs don’t accommodate a substantial rechargeable battery.

The rather flimsy build quality does at least make the set light enough (5.1kg) to tuck under your arm and move around, and its glass-free finish makes it fairly tolerant of camping clumsiness.

The C32227T2-S2 really does go the extra mile to keep campers and caravanners happy. The battery life is very impressive. I got seven hours out of it even using the Dynamic picture setting and with the volume running quite loud. This stretches to more like 10 if you can cope with one of the darker picture settings.

The two high-efficiency LED lights you get with the TV come with helpfully long cables, and have on-off switches near the end of each cable. More importantly, it can connect to a digital aerial (included), or a satellite dish if you have one on your camper. 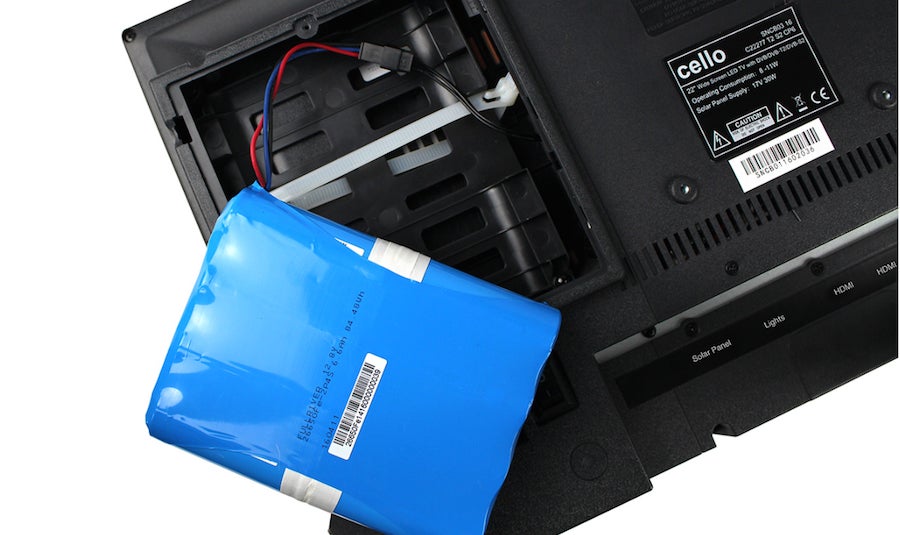 The ability to charge phones via its USB ports, and its provision of standard AC and car voltage chargers, seal the great outdoors deal.

Connections are mostly up to snuff. They comprise two HDMIs, a headphone jack, two 12V outputs, a component video input, a VGA port, a PC audio input, a composite video input, a CI input, and four USBs. Two of the USBs support multimedia playback from USB sticks, or recording from the TV’s tuners to USB HDD.

I guess it’s not common for Wi-Fi to be available on camp sites. Where it is, it might have been nice to be able to stream shows from Netflix and Amazon. Especially as this would remove the need for external source boxes.

The C32227T2-S2’s screen sports a native 720p ‘HD Ready’ resolution, and claims a respectable contrast ratio of 4000:1. It seems to be direct lit, though without any local dimming. Its panel is a VA type, while sound comes courtesy of a pair of 4W speakers.

Aside from remembering to charge the battery if you’re thinking of using it outside for any length of time, the C32227T2-S2 is pretty easy to set up. Its lights just plug into a pair of 12V jacks if you want to use them, and its HDMI, Freeview HD and satellite tuners give you plenty of source choice.

In terms of picture set up, an unsurprising lack of fine-tuning features makes life pretty easy. I’d recommend sticking with the Dynamic picture preset, and either turn noise reduction off completely or put it on its Low setting if you’re watching something that’s particularly grainy. Aside from that, the only thing I’d suggest is making the effort to switch between the Standard (TV show), Movie and Sports sound settings. 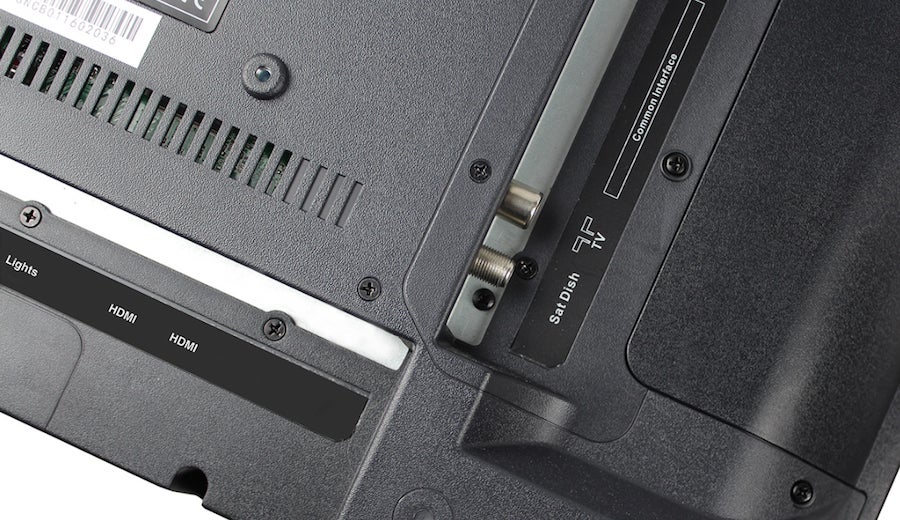 The C32227T2-S2’s pictures are better than expected for a TV designed for pretty much the exact opposite of a normal living environment.

Contrast, in particular, is excellent. Parts of the picture that should be black actually look black. There’s practically no trace of the low-contrast grey ‘mist’ that leaves dark scenes on so many affordable, small-screen TVs looking washed out.

Even more startling for the C32227T2-S2’s money is the evenness of its black level response. There’s no significant backlight clouding, even in the picture’s corners. Outstanding.

Dark areas generally contain a reasonable amount of detail too, and there’s none of the brightness ‘jumping’ associated with TVs that use dynamic backlighting.

Good black levels usually lead to good colours, and so it proves with the C32227T2-S2. Its tones – even its skin tones – are consistently natural. There are no bluish or greenish undertones, and no tones stand out unnaturally against the rest.

Skin tones don’t look plasticky or blocky, showing a surprising amount of refinement for a TV of this type. This is backed up by an absence of striping or banding in backgrounds, skies and other areas of subtle colour blends. Colours also look like they’ve been properly tuned for TV (rather than PC monitor) use. 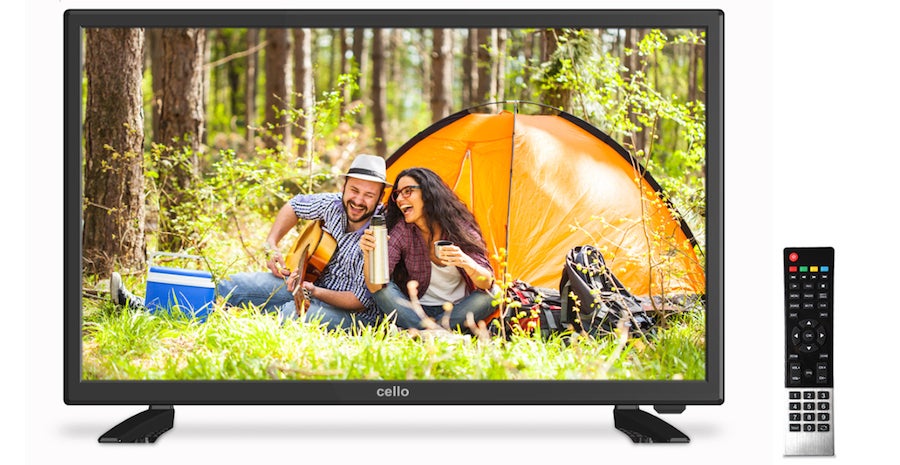 Pictures look decently detailed despite the sub-HD resolution, yet the sharpness doesn’t look forced. There’s no grain or fizzing noise beyond what might be present in a source, and sharply contrasted edges look free of the tell-tale stressing or haloing issues you get when TVs are using aggressive picture sharpening processing.

The clarity does reduce a little when there’s motion in the frame. At the same time, movement is likably free of judder. Also, while there’s a drop in resolution during camera pans, this doesn’t descend into smearing and trailing.

Another small issue is some shimmering noise over areas of very fine detail, patterned clothing. This doesn’t show up often, and is fairly effectively countered by the set’s noise reduction feature.

The main issue with the C32227T2-S2’s pictures is simply that they’re not very bright at all. This may well be part of the reason why it excels so much with its black levels and contrast. It’s also likely related to the TV trying to balance picture performance against the capacity of its built-in battery. It’s not an ideal limitation on a TV likely to be viewed by moonlight, firelight or even daylight pouring through tent canvas.

The lack of brightness occasionally makes a particularly dark area look a bit hollow, although  you generally see more detail in dark areas than you do with TVs that suffer with backlight clouds or general dark scene greyness. 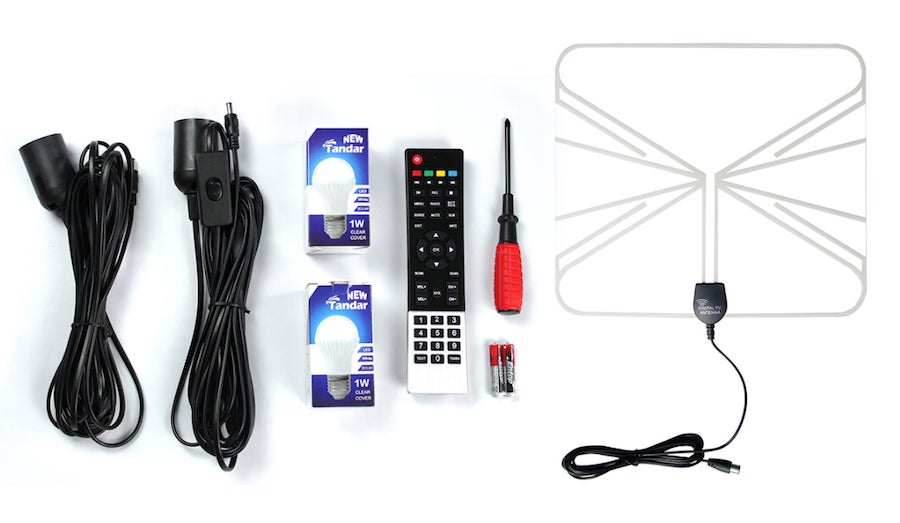 If you’re thinking of taking your games console camping too (well, why wouldn’t you?!), the C32227T2-S2 remains a decent proposition. I measured its input lag – the time it takes to render images – at around 27ms. This is a perfectly respectable if not earth shatteringly good result.

Sound performance is adequate, too. Despite not having massive amounts of bass or mid-range openness, it delivers its sound without distorting or causing the cabinet to rattle. Also, while there’s a slightly compressed feeling to vocals and treble effects, this consistently stays the right side of harshness. So while the soundstage doesn’t sound especially convincing when pushed hard, it seldom sounds harsh.

One odd little audio quirk finds the speakers seemingly turning themselves off momentarily during very quiet moments. This again may be related to trying to save battery power. But if so it’s a shame you can’t seem to turn the feature off, as it can sometimes be distracting.

If you’re in the market for a camping/caravanning 32-inch TV, the C32227T2-S2 is uniquely qualified. Battery powered TVs that ship with a car charger, two LED lights and the ability to charge your phone just aren’t common. Surprisingly the set also performs well enough to work as a good second-room TV when you’re at home. 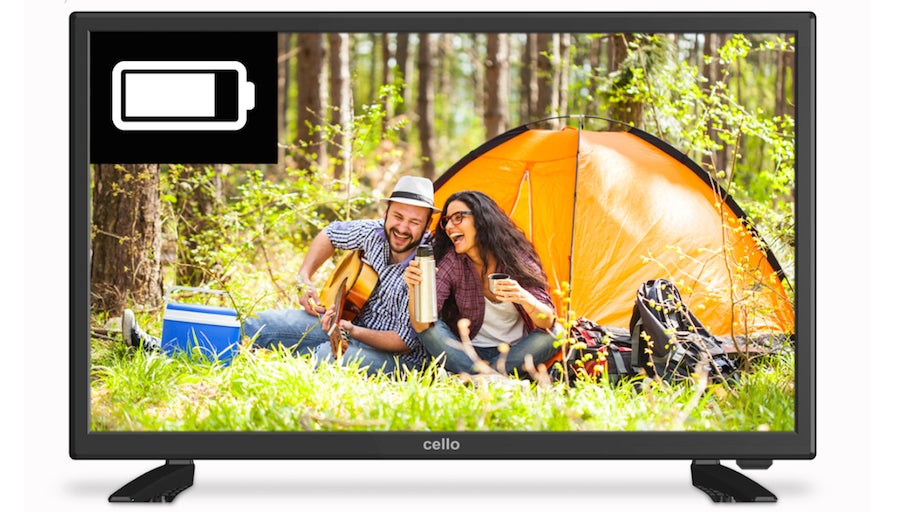 The only significant problem with it is its lack of brightness. This might be good for battery life, but it’s not ideal for watching under sun-drenched canvas.

One competitor for the C32227T2-S2 is the recently reviewed BenQ GS1 projector. This is also battery powered, and ships with a splash-proof outer case. It even provides ‘camp fire’ and ‘starry night’ picture modes.

Apart from its lack of brightness, the C32227T2-S2 almost ruthlessly meets the needs of its outdoors-loving target market. Yet it also performs well enough to make a genuinely satisfying second-room set when you’re at home.