When Palm announced its Foleo, then failed to follow up with a shipping product last year, sages across the industry wisely nodded their heads in a “I told you so”. Why buy a relatively dumb laptop, they asked, when a fully functioning product such as the Eee PC could be had for less money?


In the inimitable words of our very own Gordon Kelly, it was; ”an utter disaster of a product that should never have gotten off the drawing board”. Well, if the Foleo was a disaster of a product, I wonder what he would have made of Celio’s Redfly? (I thought this! – Gordon). 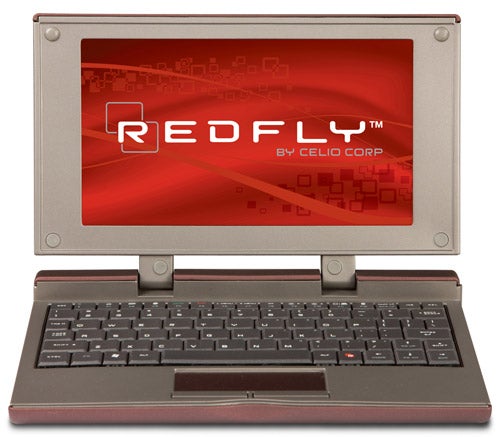 It’s effectively the same concept as the Foleo, and though it looks like a mini laptop such as an Eee PC, it’s actually what’s called a mobile companion. No, it’s not an electric blanket for your smartphone to keep it warm during the long, cold winter nights, but a terminal that connects to your Windows Mobile phone; what you see on the screen of the Redfly is effectively your own smartphone’s operating system, complete with mobile office suite, push email, connection to the Internet and so on. There’s no storage on the Redfly, and not much processing power either – it relies on the phone to do pretty much everything bar display the image on screen. 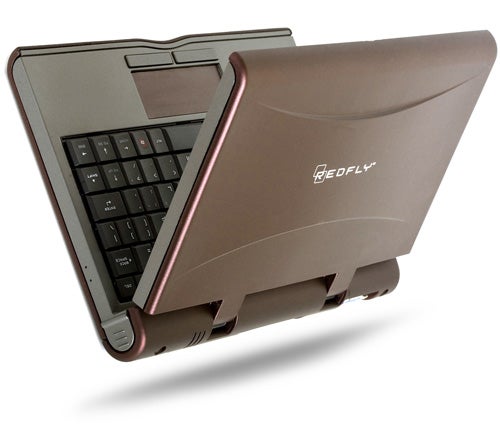 It’s a nicely designed and extremely portable device, too. The chassis is wrapped entirely in an attractive burgundy soft-touch plastic finish and it feels robust enough to take its fair share of knocks. Around the edges of the device are a couple of USB ports, which can be used to connect USB flash drives, an external mouse as well as the phone you’re interfacing to, plus a VGA port for connection to an external monitor. And at 229 x 152 x 51mm and 0.9kg, it’s smaller and lighter than the smallest of the Asus Eee PCs as well. 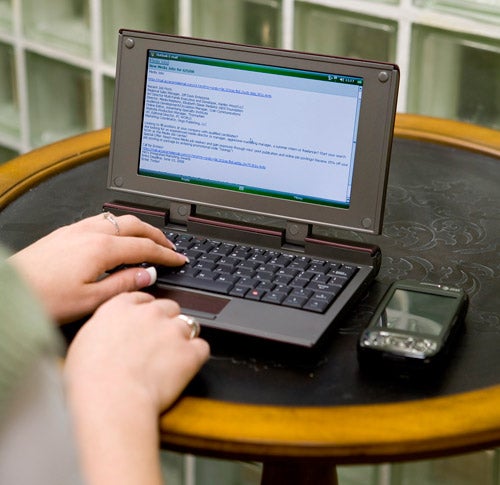 And there’s no denying that it does what it claims to do pretty well. Plug in your smartphone via USB and a few seconds later, its screen instantly appears on the 8in 800 x 480 pixel TFT display of the Redfly. Bluetooth setup is a simple job, too. I hooked up my HTC TyTN II and was tapping out this review in a matter of moments, browsing the web and sending email out without pause for thought. Though there’s no microphone or speaker on the Redfly, receiving calls is simple too – simply click Answer on the screen of the Redfly when the phone rings and pick up your handset to talk as normal.

The Redfly supports the connection of Windows Mobile 5 and 6 phones in both standard and professional guises – and though the list of officially supported phones is short, I managed to hook up phones not on the list without experiencing any issues. 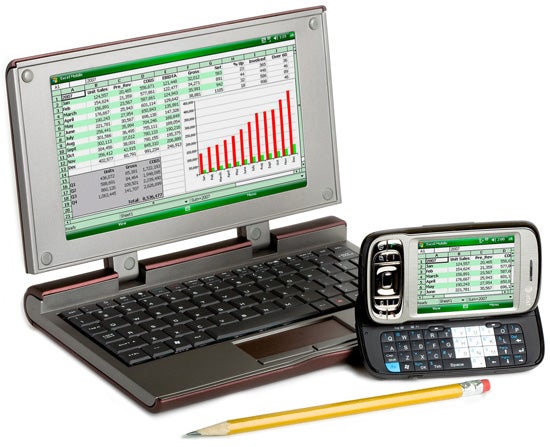 But this isn’t the best thought out device, and in many ways it’s afflicted by the same problems as the ill-fated Foleo. Celio likes to point out that the lack of storage, software licensing costs and maintenance that comes with a Redfly makes it attractive as a business tool, but it still feels overpriced to me. At £310 it’s more than £100 more expensive than the much more capable Eee PC 701 4G. There are no audio facilities (no headphone jack or speakers) and it won’t play video on its 8in screen, so you can forget about using it to entertain yourself during long, tedious journeys. And though using the Redfly with a smartphone such as the TyTN II is fine for word processing and email, when it comes to browsing the web it’s not such a joy to use.

Loading up pages with Opera Mini or Minimo is quick enough, but try to scroll up and down and you’ll soon become frustrated. It seems that the Redfly’s USB connection just isn’t quick enough to keep up – just clicking on a scroll bar results in a noticeable delay before the page responds and it was the same with Google Maps. Connecting to a phone with a more powerful processor than the 400MHz unit in the TyTN II seemed to help, as did moving to Pocket IE (a terrible thing to have to do), but it was still far from nippy. That’s a huge disappointment, especially considering that one of the key advantages of having a larger screen than your Windows Mobile handset is to make browsing the web a more comfortable experience. 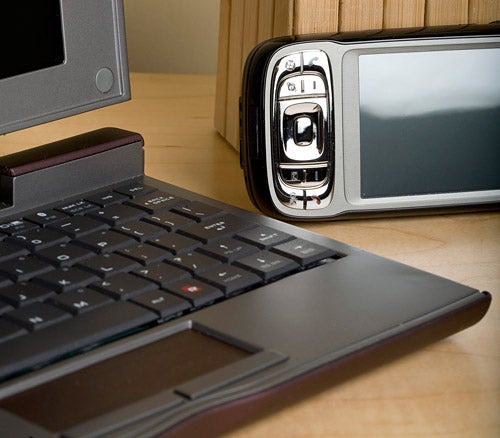 It isn’t compatible with 100 per cent of mobile apps I tried either. Though Office Mobile worked fine, as did all the standard Microsoft apps and tools, the Redfly didn’t get on with SPB Mobile Shell’s fancy graphics – it caused an Out of memory error to be generated – and Opera Mobile 9.5 failed to work too. Even some of Windows Mobile’s own screens failed to display correctly – the Home screen on my TyTN II was missing its text.

However, despite the compatibility and performance issues there are some redeeming features here. The first is that the Redfly is a very usable little device. The keyboard, though a little clacky is just about spacious enough to touch type on with a little care and precision. The whole of this review, in fact, was written on the Redfly in conjunction with my HTC TyTN II smartphone and once I’d got used to it, I found myself able to get up to a reasonable typing speed. The tiny touchpad below the keyboard is very good too – sensitive and accurate, with plasticky yet responsive buttons below it – and the screen is bright and readable too. 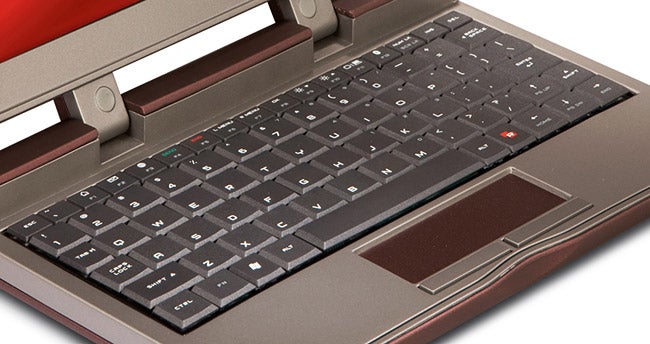 More important than all of this, perhaps, is the device’s battery life. Since the Redfly allows your smartphone to shoulder the entire processing burden, there’s very little for the Redfly’s battery to do and as a result it offers quite simply staggering battery life – more than I’ve ever come across in any full-blown laptop, in fact. In a light use test, I managed to extract 11 hours 16 minutes from the Redfly connected via Bluetooth – that’s enough to power the machine on a flight to New York and back without the need for a charge! Even the latest Intel Atom-based mini laptops can’t get close to that sort of longevity, while full-sized laptops with respectable battery life – the Lenovo X300, for instance – tend to cost a heck of a lot more money. 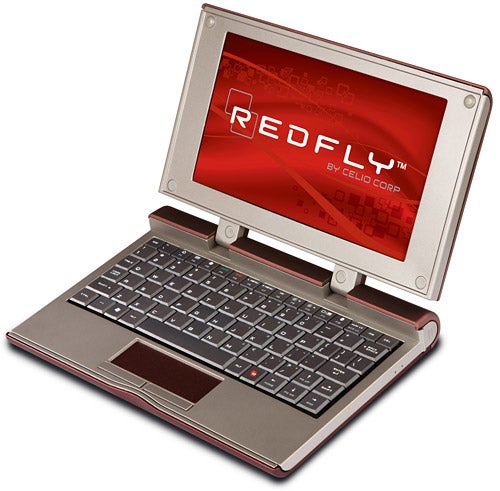 
But despite all this, ultimately I just can’t shake the feeling that it’s not really worth paying more than £300 for a machine that’s effectively a luxurious Bluetooth-enabled keyboard, screen and powerpack for your smartphone.


Perhaps if it worked perfectly with all phones and mobile applications, and made a better effort at web browsing, video, and audio, I might have had grudging respect for it, but given its many flaws, I’m afraid it can’t possibly be recommended.