The S61 is the successor to the stellar CAT S60 that debuted over two years ago. For those who missed the original CAT, this is a big deal for a variety of reasons.

Featuring a rugged design and custom FLIR thermal imaging sensor that granted users full on Predator vision, the S60 was the ultimate rugged phone for professional working in hazardous environments and avid tinkerers when it launched in 2016.

Clearly aware it’s onto a winning format, Bullit has chosen not to rock the boat on the S60, refining rather than rethinking the design of the S61. Highlights include a more powerful thermal imaging sensor, laser measuring tool and ambient air sensor that will act as canary in a coal mine.

The end result is a great rugged phone that’s ideal for a variety of different professions. The only downsides are that performance issues and a fairly ridiculous price will compromise its appeal to hobbyists. 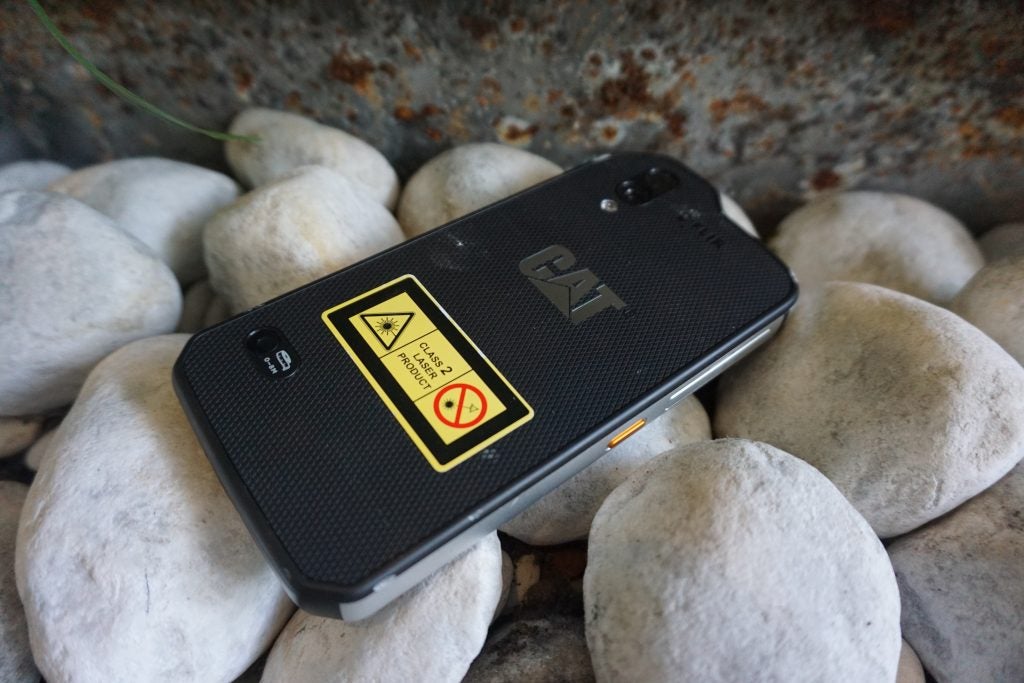 The CAT S61 isn’t a subtle phone. It’s been unashamedly designed for toughness, not visual flair. If the Galaxy S9 and iPhone X are the sports cars of the smartphone world, then the S61 is its armoured truck.

It has a very similar design to the original S60, featuring metal sides and a rubberised back, which feels more like a car tyre than smartphone chassis. There are plug covers for all of its ports – which, thankfully, include a 3.5mm jack alongside the standard USB-C charging port and microSD inputs.

Up front you’ll see the same three physical back, home and overview buttons that graced the S60. It also features the same left-facing programmable key, which remains as useful as ever. The key can be set to launch a variety of different apps, like the torch or laser measuring tool. It’s a minor, but important feature that further boosts the phone’s appeal to professional users or hobbyists with fairly specific needs.

It’s only when you get up close that you’ll spot a few design changes. For starters, the phone’s depth switch has been removed. The switch originally sat on the top of the S60’s front and let you block the phone’s speaker, to protect it at depths of up to 5 metres.

A CAT spokesman told me the company chose to remove the feature because “people weren’t using it”. This means the CAT S61 actually has a lower waterproofing level and can only survive at depths of up to 3 metres. For me, this is only an issue on paper. The waterproofing is still more than good enough for most professional users. Those who need more to take their phone with them into deeper depths – divers or spelunkers, for example – will also generally have to invest in a protective case regardless of which phone they use.

The discerning eye will also spot a few extra sensors lining the S61’s sides and back. This is because CAT has added a custom class 2 laser for measuring distances plus an indoor air quality monitor. 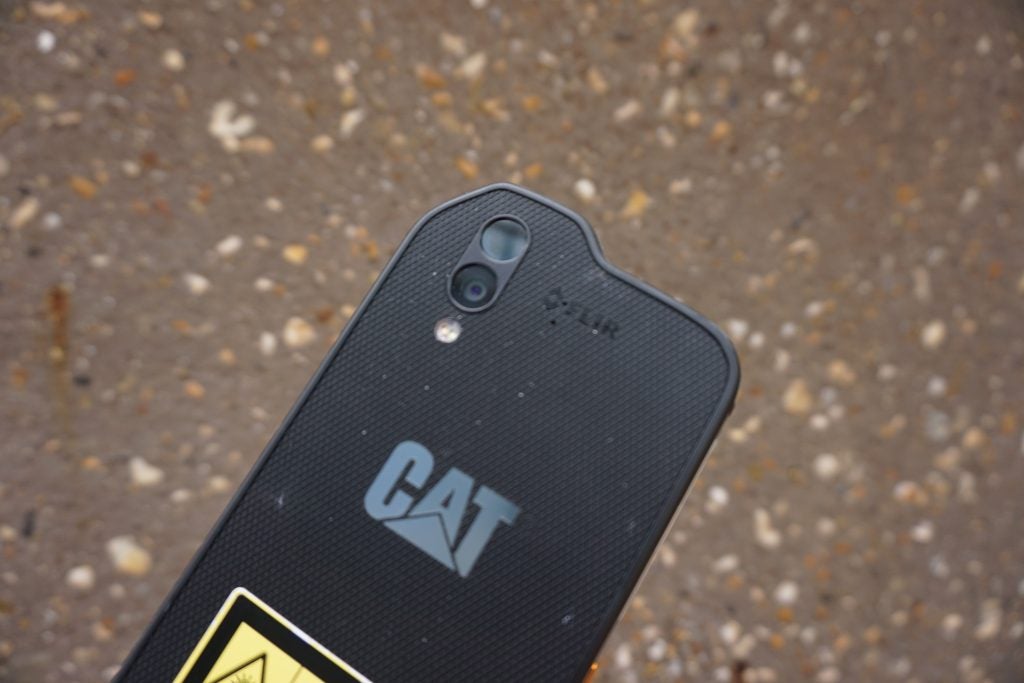 Outside of this the CAT S61 remains one of the toughest phones around, having been built to IP68 and IP69 certification standards. CAT claims the phone can survive drops of up to 1.8 metres directly onto concrete. Having measured the exact distance and dropped it onto our concrete office floor, I can personally attest to this claim – although, be warned: the rubber back does have a surprising bounce to it.

The screen, too, is ridiculously tough. On the one hand this is because it comes with a screen protector on it out of the box, but it’s also because CAT has intelligently surrounded it with a raised ridge. The border doesn’t help the phone’s already utilitarian look, but it adds yet another layer of protection around the glass, making it harder for it to be directly impacted when dropped.

If you’re planning on using the phone in the snow, CAT has also improved its effective operating range of between -25-55oC. I didn’t get a chance to test it at either extreme, though, due to Britain’s moderate climate.

Screen quality is always one of the first areas to be sacrificed on rugged phones. This remains the case with the S61. The 5.2-inch screen offers a significant upgrade on the S60’s panel, but it still doesn’t match equivalently priced non-rugged phones.

It’s close to half an inch larger than the S60’s 4.7-inch screen, plus the jump from 720p to FHD makes it significantly sharper. Holding the S61 next to the S60, text is sharper and the screen is generally more pleasant to use.

The screen temperature has also been improved. The screen has lost the cool, dull look that plagued the S61 – but, if anything, it now looks a smidgen too warm. Brightness levels are also better, although nowhere near mobile HDR levels. 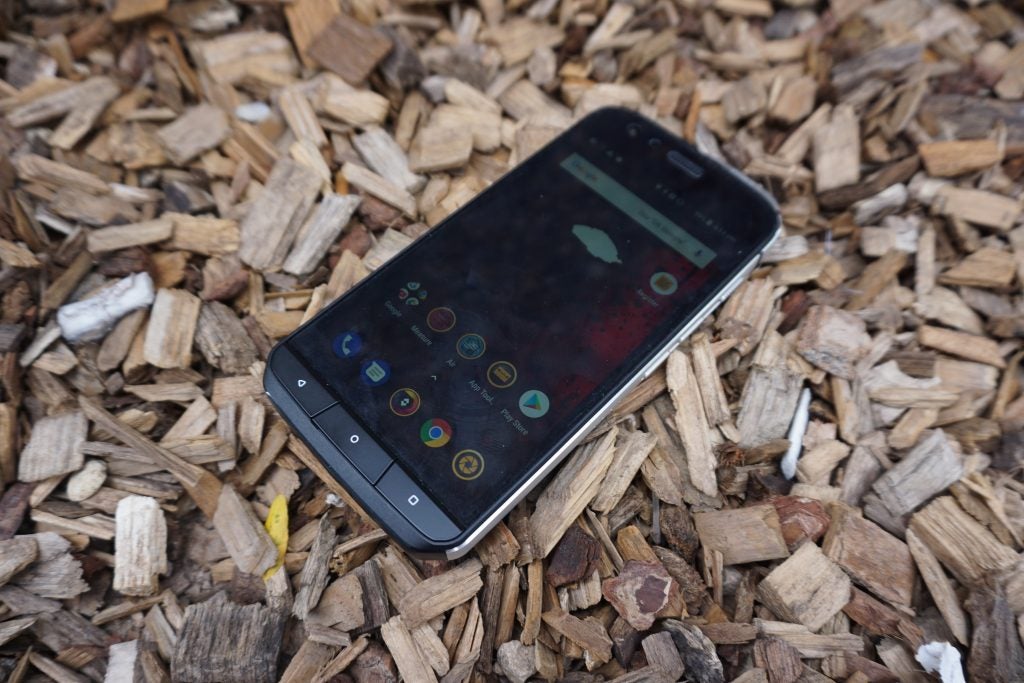 Whites aren’t the cleanest I’ve seen, but are far from terrible. The only serious downsides are its slightly lacklustre viewing angles and reflective finish. The screen protector is great for durability, but it means the phone picks up stray light very easily and rapidly becomes reflective in bright light.

For professionals or people regularly in the great outdoors, it has a useful wet-finger/glove-on working feature. The tech lets you use the device through intense downpours, which is great in rainy Britain, or whilst wearing gloves. The tech worked a treat during my tests, and I never had any issue interacting with the phone with worker’s gloves on.

The CAT S61 currently runs on Android Oreo. The company has also confirmed it will be upgraded to the newer version, Android Pie, when it arrives later this year. Security updates have also been guaranteed for at least the next three years.

CAT has taken a light touch with the OS. It hasn’t made any significant changes to the UI, and the third-party apps its added focus on helping you take advantage of the S61’s extra features.

The air monitor and laser measuring apps are good examples. Both are pre-installed CAT apps and for the most part work fairly well, even though their measurements aren’t always totally precise.

The laser measuring app is easy enough to set up and is fairly intuitive. All you have to do is launch the app, hold the phone a set distance over a flat surface, and tell the S61 how far away it is. After that you can map distances.

Using a combination of the laser and rear camera, you can also map measurements on photos within the app – great if you’re planning a kitchen or bathroom remodel. The issue is that on more than one occasion the measurements recorded could be a fraction of a centimetre off, so you wouldn’t want to use it for projects where precision is essential. 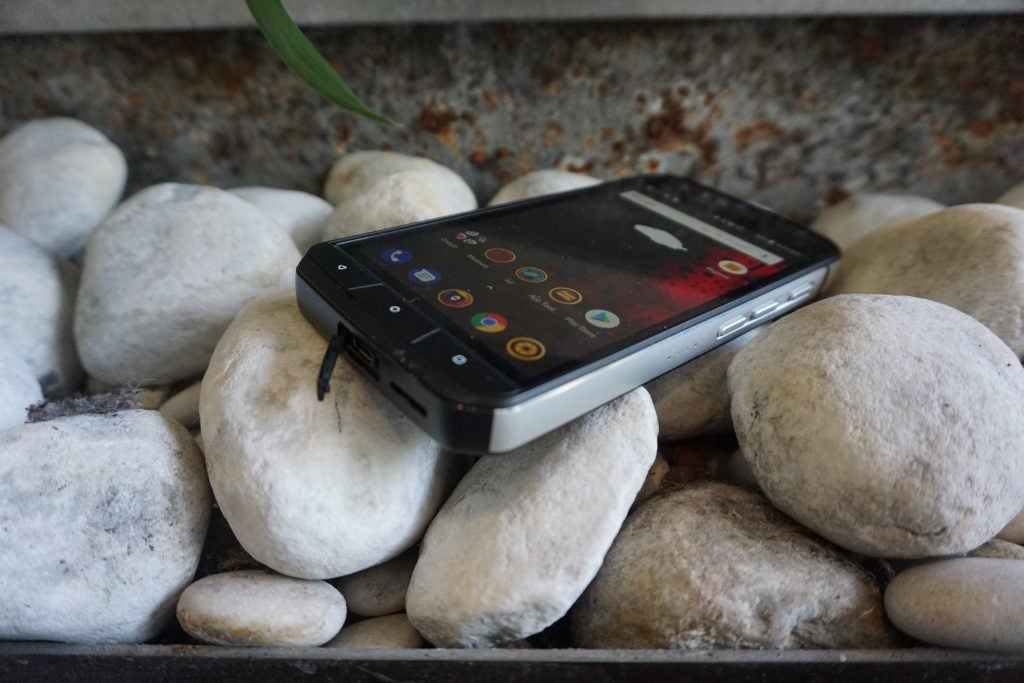 The air monitor app is equally useful for vague metrics. The feature takes around 36 hours to calibrate after first turning on the S61. Thereafter, you can set the phone up to offer real-time alerts on air quality.

The feature specifically searches for increases in Volatile Organic Compounds (VOCs) – the stuff from paints, solvents, and so on – every four seconds. If levels ever increase to what is deemed dangerous, it kicks up an alert. You can also manually check your surroundings in the app itself, which includes information on the room’s temperature and humidity.

The sensor definitely works and was an invaluable help when I was painting my flat’s spare room. On leaving the paint tins open, and forgetting to ventilate the room, the device sent me a reminder to open the window within the hour.

However, the readings always felt more like approximations that could be easily affected by the phone’s position. The device whirred into warning mode within a few seconds on the second day of painting after I accidentally left it next to an open bottle of thinner and then refused to leave the red zone, when I moved it for a good 5-10 minutes.

Aside from this the only obvious addition is the Toolbox, which is a curated store full of CAT-recommended apps. These include things such as GPS, barcode readers and spirit-level tools.

One issue CAT hasn’t addressed on the S61 is performance. The phone runs using a Snapdragon 630 CPU and 4GB of RAM. These are specs you’d normally find on a mid-range £300-£400 phone. For day-to-day use, they work well enough. Apps and services open reasonably quickly and the device will play games, such as PUBG.

My real-world impressions were reinforced in the synthetic benchmark tests. You can see how the S61 compares to the Galaxy S9 in the table below.

However, the performance issues only become problematical when you try to take advantage of the phone’s most interesting feature, its FLIR thermal imaging sensor.