The CAT S60 is one of the most interesting smartphones I’ve tested this year. Featuring a rugged, near-indestructible chassis, the S60 is the first phone I’ve seen with a built-in thermal imaging sensor.

The sensor not only gives me the Predator vision I’ve long yearned for, but also acts as a useful tool in a variety of work, DIY and extreme sports environments.

This, combined with its top-notch hardware and software, make it the ideal choice for everyone from adrenaline junkies to professionals working in hazardous environments.

The CAT S60 puts function over fashion, and as a result looks markedly different to a regular consumer smartphone.

The device is built from a mixture of a hardened polymer and sturdy metal. The side-facing microSD and Nano SIM ports are covered with plugs, and the front’s adorned with a chunky bezel and clicky physical home, back and menu buttons.

Some people will be put off by the design, especially when they realise that, at 12.7mm thick, it’s almost twice as chunky as a regular smartphone, but I’m a big fan. The design is entirely fit for purpose and ticks all the right boxes a rugged smartphone should.

For starters it’s close to indestructible. You won’t get away with driving a car over it, but with regular use you’ll struggle to put a dent in the S60. Doing DIY around my flat, the phone survived a drop off a 7ft ladder chip-free. Though I wouldn’t recommend trying to recreate my test, CAT quotes the phone as being drop-proof from heights up to 1.8m.

The phone also managed to come out of an accidental encounter with a climbing wall, when strapped to my arm, without so much as a blemish. 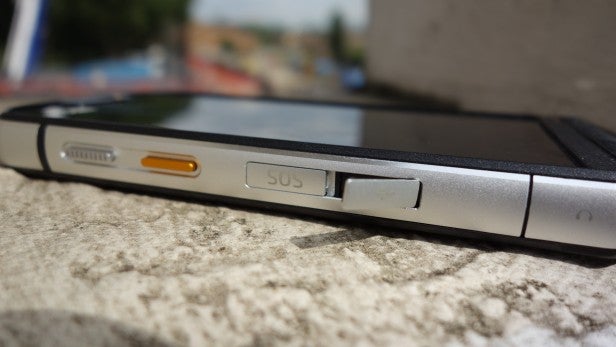 My attempts to drown it confirmed its IP68 rating to be accurate. It’s waterproof to depths of 5m – though be warned, if you want to dunk it down more than 2m, you’ll need to flick a switch on the phone’s front to seal its speaker grille.

The strengthened dye frame’s also impressively scratch-proof and remained blemish-free despite the punishment it endured.

CAT’s also loaded the phone with a custom SOS button, for people using it in hazardous environments. The button can be customised to fulfil various functions, including calling emergency services and sending out location alerts to team members nearby via SMS.

The S60’s reasonably comfortable to hold, despite its chunky dimensions, and I never felt it was unwieldy or too heavy. Using it as my main phone, though, I got a few odd looks from people in the pub and around the office.

The microSD port lets you add a further 256GB of space to the phone’s built-in 32GB of storage, which will be handy for professionals who regularly need to save images recorded using the S60’s thermal sensor. 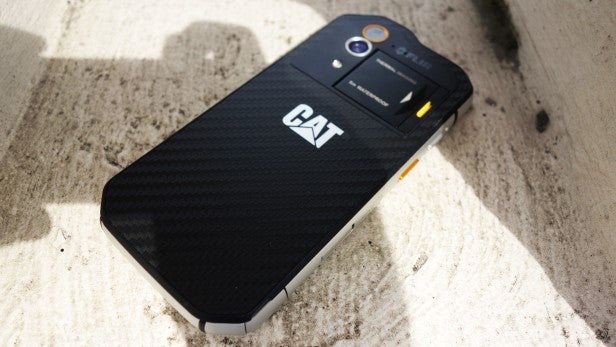 The S60’s 4.7-inch display is one area in which the phone fails to impress. In today’s world a 720p resolution is sub-par on phones close to half the CAT’s price. The resolution is sharp enough for text to be legible, but you will notice specific pixels when viewing pictures, or watching video.

The screen’s black level also isn’t great. This is likely due to CAT’s use of  Advanced Hyper-Viewing Angle (AHVA) screen tech. AHVA is based on IPS technology, which generally doesn’t offer as deep blacks as competing AMOLED displays. Blacks on the S60 have a grey tone and aren’t anywhere near as inky as I’d like. Whites also aren’t the cleanest I’ve seen and have a yellow muddy hue.

The combination of factors give the screen a dull feel, which is a shame as, these issues aside, it looks reasonably well calibrated. Viewing angles are solid and I didn’t notice any serious colour distortion when viewing the screen from the side. Brightness levels aren’t dazzling, but they’re high enough to comfortably use the phone in everything but bright sunlight.