When you think of Caterpillar you probably think of big dumpster trucks and giant diggers — stuff that’s built to either give out a pounding or to take one. Of course the company has expanded into clothing and watches in the past, so perhaps it’s not surprising that it’s now lending its name to a smartphone. But this isn’t just any smartphone, as the CAT B15 is a ruggedized phone that’s dust and waterproof and is so macho that CAT reckons it can shrug off a drop from 1.8m on to concrete in the same way that Chuck Norris shrugs off a bullet to the chest as just a minor flesh wound. 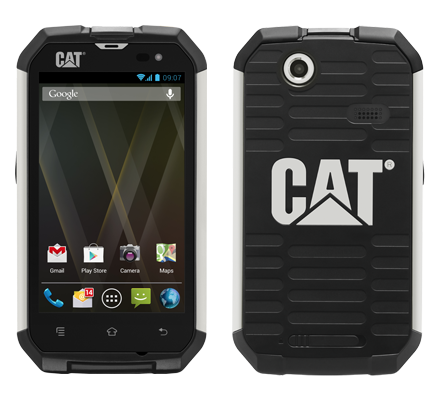 As the CAT B15 is a ruggedized phone it’s obviously much thicker and a fair bit taller than your average smartphone with a 4-inch screen. At 16mm deep it’s almost twice as thick as most of today’s mid-range handsets and the rubber bumpers on the top, and aluminium protectors on the sides, make it quite tall and wide too. It certainly feels like a chunky unit when you’re holding it in your hand, although it’s far from uncomfortable to use.

The phone is ruggedized, but not marketed as being indestructible, so it’s water proof to one metre for 30 minutes and it’ll survive a drop of 1.8 metres onto concrete, but you can’t take a hammer to the screen and expect it to come away unharmed. 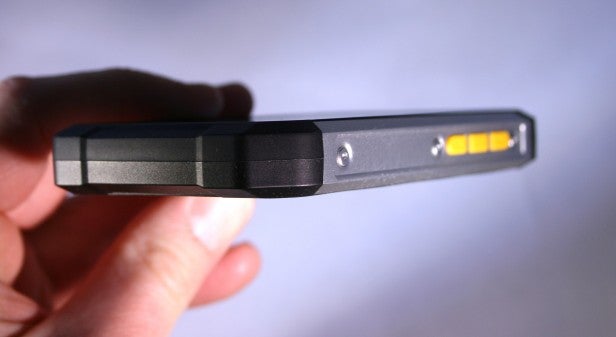 We tried dropping it on paving slabs from a 1.8 metre height (yes we measured it) and it survived unscathed. However, the battery cover and battery did pop out a number of times when dropped. That could be a real world disaster if the battery managed to find its way into a nearby puddle of water, so perhaps
CAT needs to look again at the locking mechanism for the battery cover.

We also dunked it in the bath and this didn’t bother it at all. You do have to make sure the flaps covering the headphone jack at the top of the phone and micro USB port on the left hand edge are closed, as well as the battery cover lock before you submerge it.

As ruggedized phones go, it actually looks quite appealing to the eye in an industrial sort of way. The riveting on the aluminium side panels is a nice touch, as is the traditional CAT corporate yellow colour used for the power buttons.

There are a few of issues with the design, though. First, the power button is too flush with the rest of the case, so sometimes it doesn’t respond and you have to put more pressure on it. 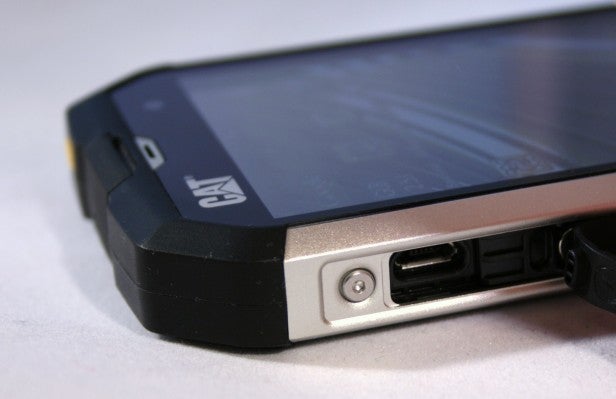 Secondly, and more annoyingly, the recessed microUSB port doesn’t have enough clearance to work with a normal micro USB lead. We tried several and none would fit through the recess, so you have to use the supplied lead that has less plastic around the micro USB plug. Also, the micro SD card slot and dual-SIM card slots are stacked on top of each other, and this makes it a little bit trickier than it should to get cards in and out of the slots.

The CAT B15 has a fairly standard size 4-inch screen and its resolution, although reasonable at 800×480 pixels, is nothing special by today’s standard. Nevertheless, text and icons look sharp enough.

The screen’s outer coating has also been specially developed so it will work if you try using it with wet hands, unlike most capacitive displays. We tried it out and it really does have no problems responding to touch even if your fingers are soaking wet, so it should work fine outside in the rain, for example. 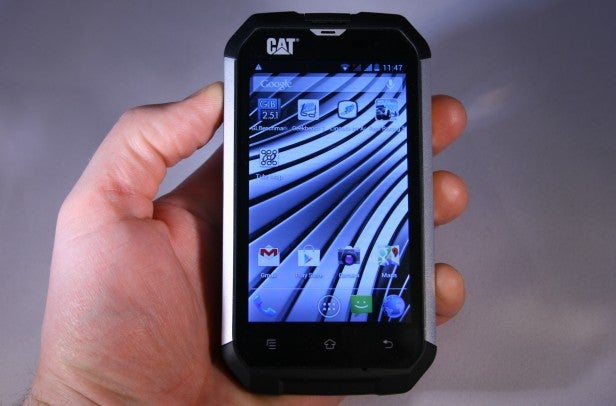 The display’s default brightness level was a little bit dim for our liking and although it has an automatic brightness setting it seemed a tad slower than most handsets to respond to changing lighting conditions. Controlled manually, however, and the screen is just as bright as most mid-range smartphones.