Despite being one of the longest-running game series, Castlevania hasn’t been able to maintain the presence of other 8-bit contemporaries like Mario, Ninja Gaiden, Metroid, Sonic or Zelda. The legendary 2D platform/vampire-slaying series peaked in popularity during the SNES era, then managed a wonderful comeback with Symphony of Night on the original PlayStation, yet it never made the successful 3D transition that could have put it back in the public eye. Attempts on the Nintendo 64 were barely playable, while a decent stab on the PS2 – Lament of Innocence – failed to capture the imagination in a world where Devil May Cry now reigned supreme. In recent years, Castlevania has retreated to the handheld formats, where 2D games are still respected and where the likes of Aria of Sorrow on the GBA and Dawn of Sorrow on the DS have been able to keep the name alive. 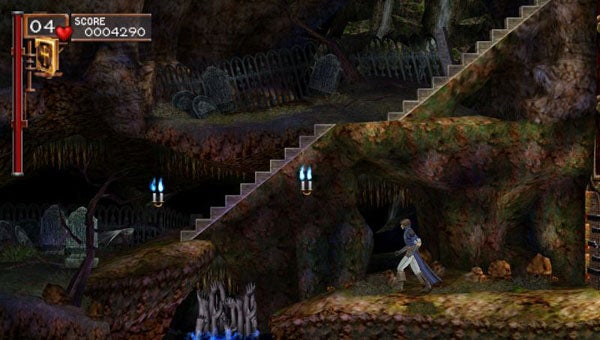 The series’ first outing on PSP, however, is something different. Between the SNES Castlevanias and Symphony of Night, Konami released a PC Engine exclusive Castlevania known as Dracula X: Rondo of Blood. While elements of the game were bastardised for an eventual SNES release, the game was never released in the West, and as a result it has developed a legendary status. The centrepiece of The Dracula X Chronicles is essentially a remake of this game, with the action still played in old-fashioned 2D, but – like last year’s Ultimate Ghosts ‘n’ Goblins – portrayed in new-fangled 3D. Most sensible people call this approach 2.5D. 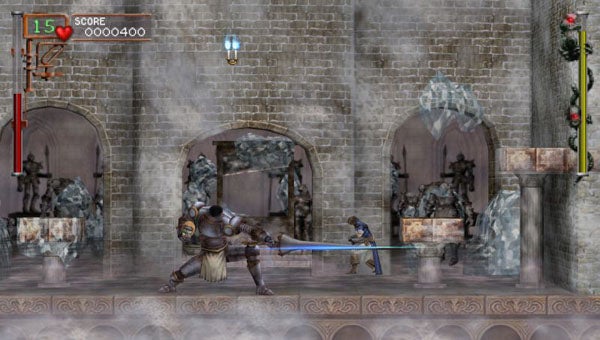 In this case, the results aren’t quite as immediately spectacular. Despite the 3D treatment, the visuals have much of the character of the old-school, sprite-based Castlevanias, and it’s only in the silky smooth animation, some lovely background details in the environments and – most of all – the cut-scenes and boss battles that you see a huge improvement. The last two aspects are important. The Dracula X Chronicles has some of the prettiest, most atmospheric cut-scenes I have seen in a PSP game, complemented by some gorgeous hand-drawn artwork during character conversations. The boss battles, too, are storming. Not only does each boss now get a cool, Zelda-style cinematic introduction, but the 3D treatment allows them to take on a breathtaking scale without the sluggish, unrealistic movement you used to see when sprite-based 2D games tried to do the same thing. As the bosses themselves are genuinely well-designed, with highlights like a giant skeletal monstrosity capable of whipping itself into all sorts of lethal combinations, these encounters stand as the visual highpoints of the game. 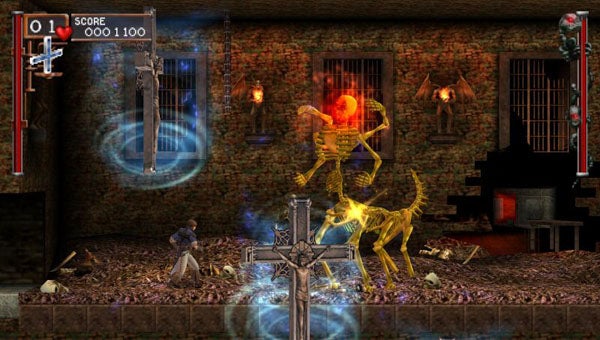 Sadly, while Konami has updated the visuals, the actual gameplay is vintage 1993. Fans might be grateful for such a faithful translation, but the rest of us probably won’t. There’s nothing wrong with an old-school 2D platform game where you get to beat a variety of monsters up with a vampire-killer whip and a range of spectacular special attacks, but there is something wrong with one that plays like this. You can see that, at the time, the series was doing its best to stride forwards. The linear level progression that was the norm is replaced by a system of branching levels, where secret doors and passages open up new levels and new boss battles, and you could complete the game by taking several different paths. However, the problems come back to things as fundamental as character movement and control.

Basically, our hero, Richter Belmont, moves like a man with a nasty case of haemorrhoids. Worse, he can’t run if his life depends upon it – which it frequently does. Despite the fact that enemies can attack from all directions, he can only use his whip horizontally left or right, and he’s a painfully unresponsive platform leaper. What’s more, Richter can only go up or down stairs if you press the appropriate diagonal key at the right time to make him do so. Put these things together in the initial levels and they’re an annoyance. Put them together when the going gets tough later on – or in one of the more challenging boss battles – and you have a recipe for sheer exasperation. Dracula X Chronicles is the first game that has ever made me physically abuse my PSP. Having endured one solid thump, the poor beleaguered handheld even asked if I wanted to quit the game. Accident or heartfelt plea? I guess we’ll never know. 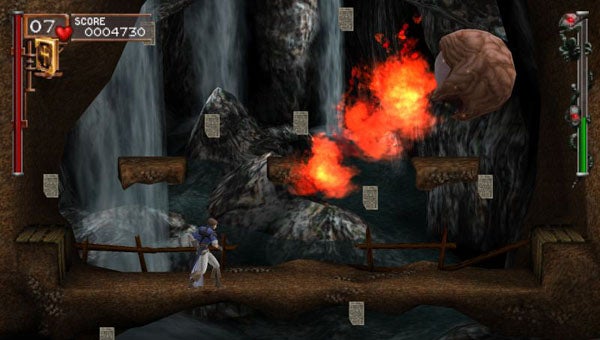 There are times, too, when the Rondo remake seems just too hard-edged for modern tastes. Many foes are crazily difficult, requiring an intimate knowledge of their attacks and movement patterns and several solid swipes before they’ll go down for good. There are annoying drops and sudden-death plunges a-plenty. When something fatal happens, you’ll curse because, while you have a limited number of continues which allow you to restart from the same area, run through these and you’ll have to kick through the whole stage from the beginning. Grrrrr! 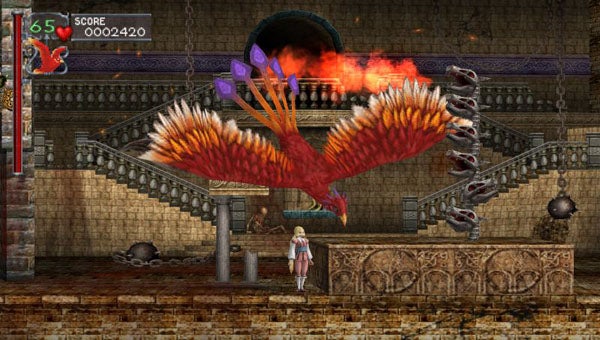 Despite this, the new Dracula X does have a certain magic. I’ve sworn at it, screamed at it, and nearly thrown my PSP across the room on more than one occasion, but there’s something about the game, its different routes and its secrets, that keeps me coming back for more. Plus, take a particular route through level 1 and level 2 and you can unlock a second playable character, Maria, who moves faster and has a more flexible selection of weapons than rubbish old Richter. This makes the game almost decently playable, and so you’re more inclined to explore it. I’m still not sure I’d recommend this remake to everyone, but anyone with a love of retro classics should certainly consider it. 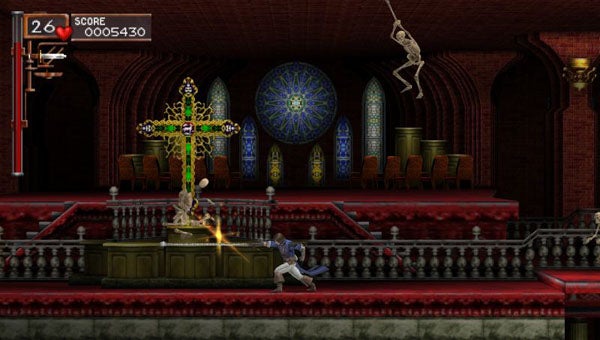 There is, however, another reason why anyone with a PSP might want to give Dracula X Chronicles a go. Hidden deep – annoyingly so – within the alternate third level of the Rondo remake is an icon that unlocks the full, original version of the next game in the series. This just happens to be the classic Symphony of Night, complete with a few enhancements like new (and less amusingly ridiculous) English dialogue plus Maria as a second playable character.

While the new Symphony is a straight conversion, rather than a remake, it’s a better game than the new Rondo of Blood in nearly every way. Sure, those sprite-based graphics look dated, but Symphony of Night was arguably one of the last great fanfares for the old 2D style, and the art and animation still just about hold up. More importantly, the gameplay still works wonders. New hero, Alucard, Dracula’s ungrateful offspring, is infinitely more playable than stiff-jointed Richter and his painful ‘grapes’, and Symphony was the game that brought aspects of RPGs and Metroid-style arcade adventures to Castlevania for the first time. You can choose and upgrade weapons, armour and other equipment, there’s a solid system of helpful familiars and formidable magical attacks, and you’re free to explore the castle as your equipment and your abilities allow. An awful lot of retro efforts don’t stand the test of time, but Symphony of Night is one that does. 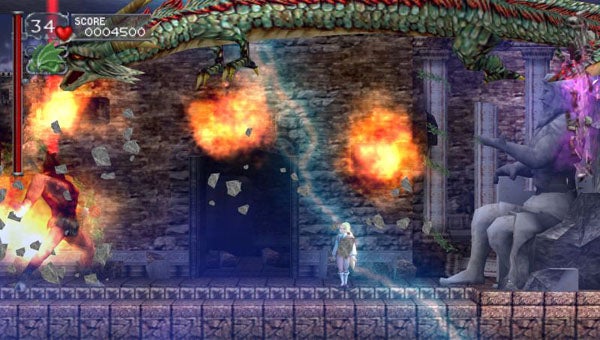 Unfortunately for this particular package, this isn’t the only way you can get it. A 360 version has been available on the Xbox Live Marketplace for over a year, and you can also download a straight conversion of the PlayStation original via PSN. Konami suggests that this new version is the definitive one, but if you’re not desperately fussed about a few minor differences then paying £25 just for Symphony isn’t really that great an idea. Long-term Castlevania nuts might feel differently, and for them a second secret addition – the original version of Rondo of Blood – will be all the reason they need to buy Chronicles. 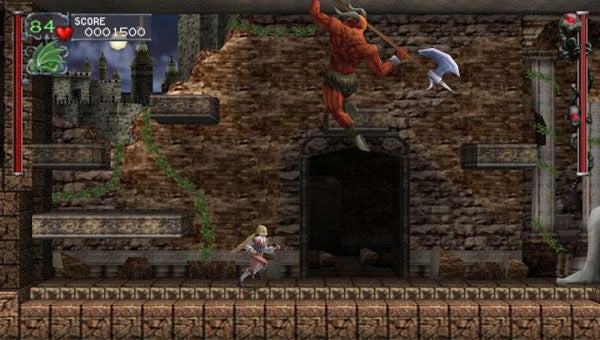 All in all, there are other ways in which I’d rather have seen Castlevania come to PSP, not least a 2.5D version of Symphony of Night (if Castlevania fans would allow it) or 2.5D remakes of the fine GBA or DS titles. Who knows? We could even have had (shock) a proper new, fully-3D Castlevania. All the same, I won’t be too hard on The Dracula X Chronicles for the simple reason that I’ve found it more absorbing than the vast majority of PSP games I’ve played. Whereas most games on the platform struggle to keep my attention past the first thirty minutes, this one kept me sweating and swearing last night until 1am in the morning.


For your £25 you’re getting not a woeful port of a PS2 game or some wildly ambitious FPS that falls flat on the hardware, but one flawed but oddly enjoyable game, one rather dated cult classic and one of the all-time greats of the PSX era. You’ll have to like your retro action to get the most out of Dracula X Chronicles, but if you do then you’ll have hours of satisfaction.


The remake of the legendary Rondo of Blood could have done with more work than just a 2.5D visual revamp, but even when it’s hideously frustrating it still has an odd fascination. The bundled Symphony of Night, meanwhile, is a genuine all-time great.