The ability to use third-party tracking apps is where the Casio WSD-F20 starts to catch up with watches such as the Garmin Fenix 5, since without Android Wear’s extra apps, it isn’t really a run tracker. The watch runs Android Wear 2.0, a huge upgrade over the original Wear. It has a much better interface, and now lets you download apps straight from the watch.

As usual, Casio’s additions to the feel of the system come in the form of watch faces. There’s a handful, including ones that show your altitude, distance travelled and air pressure 24/7. For the most part, though, I’ve been using the most basic digital watch face, because it switches to the battery-saving monochrome LCD layer after a few seconds of being idle. 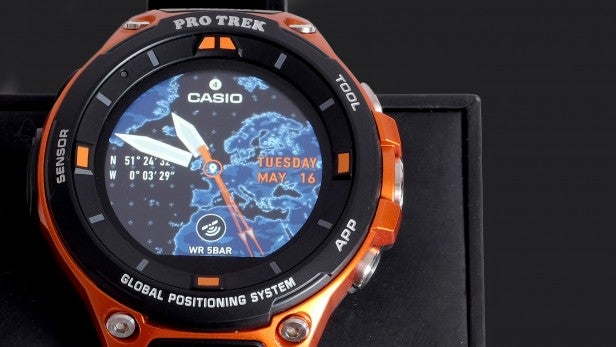 After installing a few ‘essential’ apps – such as Citymapper – I had just over 2GB storage spare; the system feels quite fast for the most part, despite the use of a lower-end CPU. Casio hasn’t publicised the details of the CPU, and digging a little deeper you can understand why.

According to an app that digs into the system registry to analyse a device’s hardware, the Casio WSD-F20 has a dual-core Cortex-A7 CPU, shown as running at 1GHz. That’s just half the number of cores and a slower clock speed than the Snapdragon Wear 2100, one of the more popular wearable processors.

A potential candidate for the role of Casio WSD-F20 CPU is the MediaTek MT2601, also used by the Polar M600. MediaTek isn’t a brand some would want to see attached to a £450 watch, which might explain Casio’s reticence to reveal the CPU. 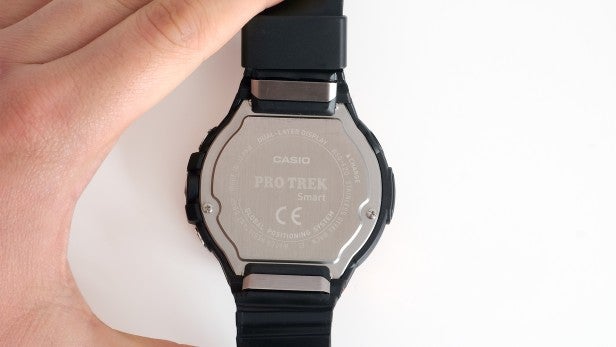 Casio also doesn’t provide details regarding the battery spec of the WSD-F20. However, I’ve been using it for a while now and it’s clear the extra bulk of this watch comes from the military-spec ruggedisation rather than fitting in a giant battery.

The Casio WSD-F20’s stamina is fine, but no more than the patience-testing norm of an Android Wear smartwatch. On one day of testing, for example, I used the watch to GPS-track an hour of exercise, and for the usual daily notifications.

It lasted through the day, having been fully charged at about 8:30am, before reverting to its ultra-low power mode at about 10:40am the following day. As standard, when the battery is low (around 8%, or so) it switches to its watch-only mode.

A full day and some – with a decent chunk of GPS tracking – isn’t bad for a Wear watch, but it’s miles behind a runner’s watch. The best such models will see you through up to 24 hours of GPS tracking. 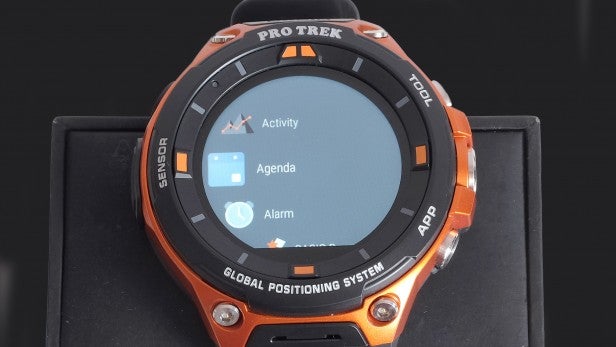 My experience suggest you’ll get a few days of watch-only operation from the last few per cent of battery. Having spent far too many days with a blank screen on my wrist having forgotten to charge a smartwatch, I think this is great.

I’m not a huge fan of the Casio WSD-F20’s charging mechanism, however. It uses a MagSafe-like charger plug that hooks onto a socket on the side of the watch. It disconnects easily, which is great for avoiding damage, but since the WSD-F20 doesn’t actually lie flat thanks to its strap design, accidentally unplugging the watch is far too easy. 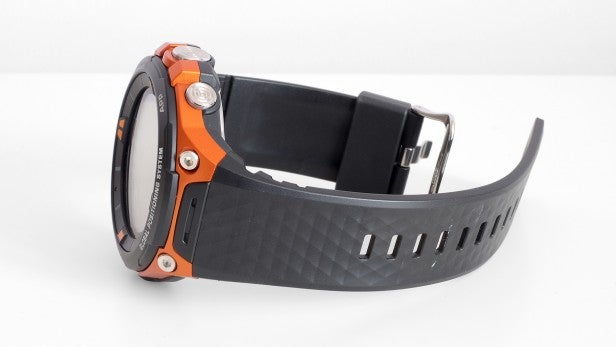 Should I buy the Casio Pro Trek Smart WSD-F20?

However, if those watches aren’t smart enough for you, then the Casio WSD-F20 is one of the best “true” smartwatches on the market that’s also a great hiking tool. Offline maps, decent custom tracker interfaces and great ruggedisation all add serious appeal. And ‘standalone’ GPS makes this a major upgrade over the original WSD-F10 too.

Not quite a Garmin-killer, but the best Android Wear watch for hikers