Until now, Android Wear smartwatches have been mostly aiming to mimic traditional, dressy timepieces. Wearables such as the Moto 360, Huawei Watch and even Sony’s SmartWatch 3 – probably the most rugged Android Wear watch to date – want to be worn everyday, and add a few extras features to a typical watch.

Casio wants its Android Wear Smart Outdoor Watch to be different – and it is. Firstly, this thing is huge. If you think other smartwatches are bulky? Think again.

Casio’s entrant sits high off my wrist, with a huge face and beastly bezels. It’s unapologetically massive, but that’s sort of the point. It doesn’t feel too heavy at 93g, but the dimensions of 61.7 x 56.4 x 15.7mm are generous. 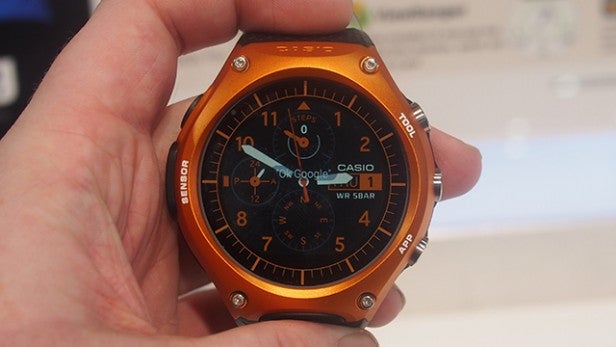 This isn’t going to replace a watch you’d wear out to a fancy restaurant, the Casio Smart Outdoor Watch WSD-F10 – to give it its full name – is all about functionality.

This is a smartwatch you’ll want to wear on hikes, climbs, cycles and the like. It’s built for the outdoors, compliant with US military standards and water-resistant to 50 meters. There’s even a built-in compass, quickly accessible with the tap of a dedicated button on the side.

One of the coolest, and most unique, aspects of the watch is the display. It’s among the sharpest I’ve seen on Android Wear with a resolution of 320 x 300 – but that’s far from the headline feature. 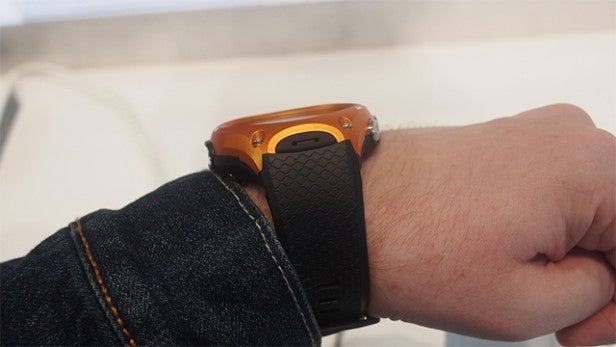 It’s built with two layers: one monochrome LCD and one colour, and it automatically switches between the two depending on the conditions. Bright sunlight? The monochrome panel will display the time without suffering any glare. I only had a short time wearing the watch, but this feature could really be a killer inclusion.

If you stick solely to the monochrome mode, you’ll achieve a month of use before you have to reach for the rather large proprietary charger. Admittedly, all this mode displays is the time.

If you’re making full use of all the features the watch will make it through a day, while using it just as an Android Wear weareable should help you eke out five days. That’s quite impressive, but you do have to remember this is a very, very large watch. 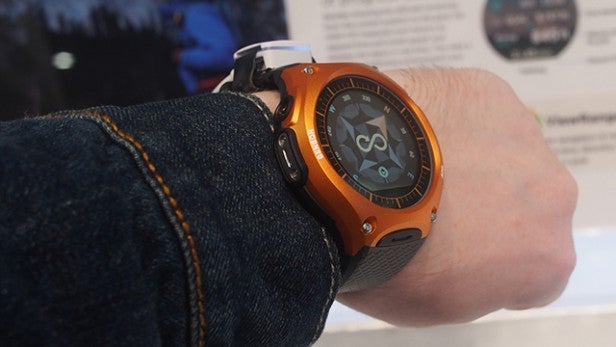 When you’re in full colour mode, Casio has added in a bunch of special apps to make use of the bevy of onboard sensors. You can check sunset/sunrise times, pressure in the atmosphere, your current altitude. These can also be utilised during activities, so in the cycling mode you’ll be alerted to your speed, while the fishing mode notifies you of changes in the atmosphere that might impact your catch.

There are a few other preloaded apps too: Runkeeper, MyRadar and ViewRanger to name but three. Watch faces are plentiful too, and they really match the rugged style for which the watch is aiming. There’s a cool altitude-mapping face that features a graph that slowly rises as you climb.

Casio-added features aside, you have the full suite of Android Wear goodies here too. You’ll receive pop-up notifications from your phone, you can perform voice searches through Google Now, there’s access to the growing selection of apps and it will work with both iOS and Android.

Sadly, there’s no built-in GPS. Instead, it pulls this from your connected phone. 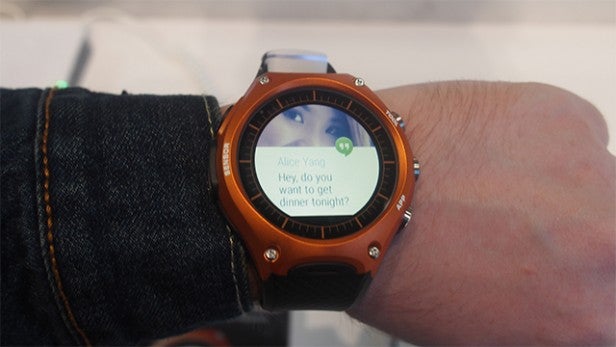 When the watch launches, you’ll be able to choose from four colours – red, black, brown and orange – and it will set you back a pretty eye-watering $500. That makes it the most expensive Android Wear watch available, and while that price will surely put off some, if you need the functionality offered here then this could be a real winner.

It might be lacking GPS, but the Casio Smart Outdoor Watch WSD-F10 is a feature-packed wearable with a clever multi-functioning display, decent battery life and plenty of preloaded software. It’s great to see Android Wear be taken in a different direction.