The Casio G-Shock GBD-H1000 is striking enough and admirable in its no-fuss approach to run tracking that it's sure to have some proponents out there, but for the high asking price, wonky heart rate detection and somewhat slow GPS, the wearable just isn't all that it could be.

While it might not exactly roll off the tongue, the Casio G-Shock GBD-H1000 sees the iconic brand bring several smart features to its rough and ready G-Shock range of timepieces.

Despite being one of the most recognised names on the watch market, Casio has largely stayed out of the smartwatch game until now. Sure, there’s been a few entries here and there, but the company hasn’t made the same consistent effort that we’ve seen from the likes of Fossil. The GBD-H1000 could be a turning point.

With a £379 price tag, the GBD-H1000 doesn’t come cheap, but that could be chalked up to the five built-in sensors that are designed to give runners every little morsel of information that they could hope to surmise from a single workout. Entry level runners need not apply, the GBD-H1000 is a serious watch for hardcore enthusiasts, and there’s a lot to break down.

Design – this could be the marmite of smartwatches

If you’ve ever seen a G-Shock watch before then you’ll know that subtlety is not what the range is all about. If the Withings ScanWatch serves as a sleek, minimalist timepiece for the modern tech lover, then the GBD-H1000 is the watch that kicks your door down in true rock and roll fashion. The H1000 is bold, brash and if you’re not ready to deal with that then you better look elsewhere. 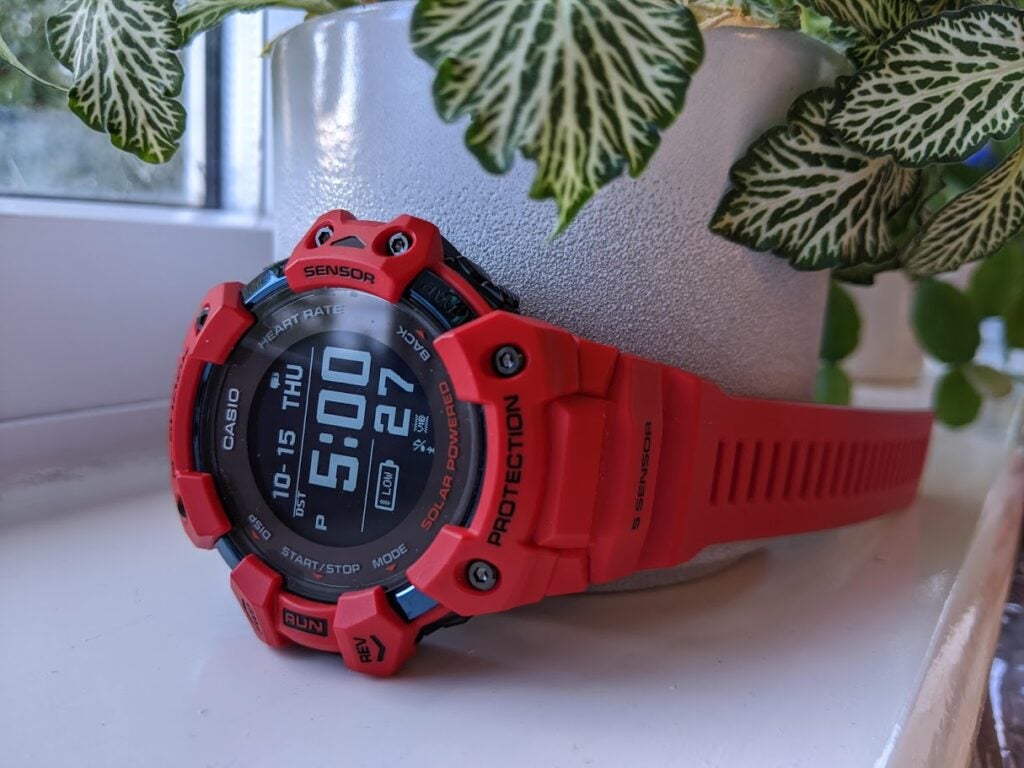 It probably doesn’t help that our review unit happens to be the stark red version of the GBD-H1000, but the core design remains the same. The H1000’s thick shell of resin and stainless steel ensures that this watch can take a hit – and probably be considered a weapon in itself. The six front-facing screws also hammer home the watch’s tough aesthetic.

The GBD-H1000 doesn’t feature a touchscreen, so all interactions are relegated to five physical buttons that encompass the watch. These buttons are quite large and feature tactile grips of their own. It’s unlike anything you’d expect to see on a typical smartwatch and so there’s a definite learning curve to using this layout, but after some time with the device it becomes easy enough to wrap your head around.

Look a little closer however and you’ll notice that one of the five buttons is unlike the rest, marked clearly as the dedicated ‘run’ button. This huge circular button lets you get straight into the action when you want to track a run, and I can’t help but admire the no-fuss nature of it all – I would love to see other watches feature a similar button to save me from diving into menus pre-workout.

It should probably come as no surprise that in keeping with its rough and rugged aesthetic, the GBD-H1000 does away with the need for an AMOLED panel, instead opting for a black and white memory in pixel LCD display. 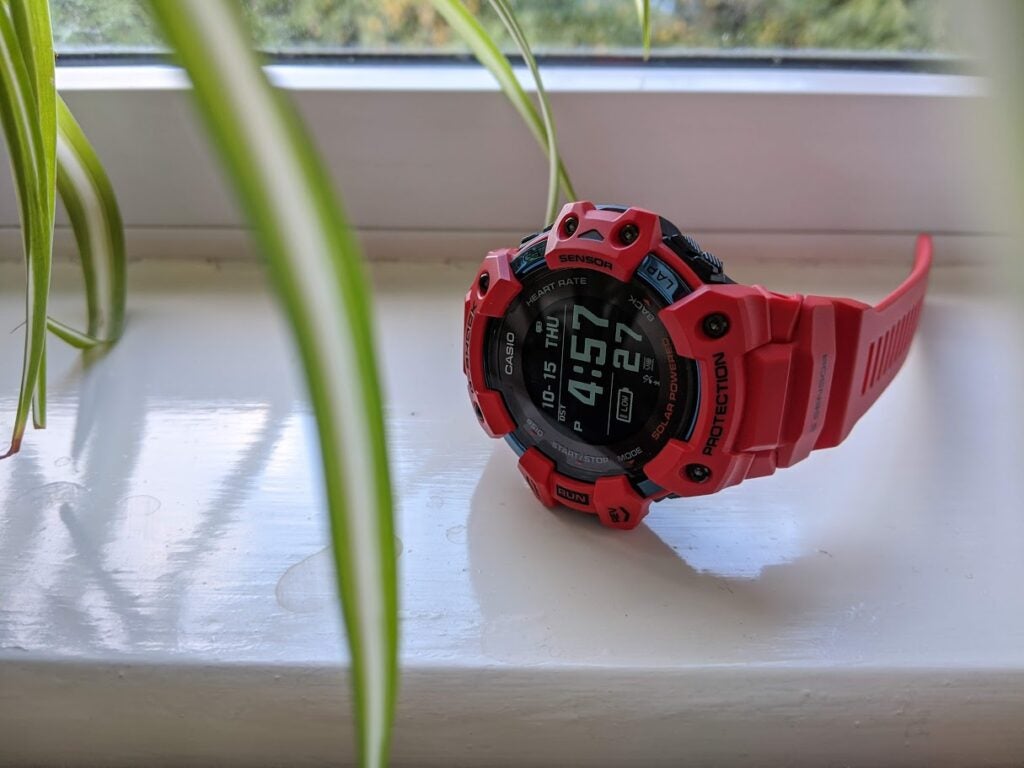 The immediate benefit of these old school displays is that they’re very easy to read in direct sunlight, and given the H1000’s emphasis on running it’s an understandable bit of consistency, but it would have been nice to see a bit more colour involved. The Polar Unite, alongside other fitness trackers in the Polar range, are great examples of this.

There is some sizeable bezels surrounding the screen, but in the case of the GBD-H1000, this space features labels for each of the surrounding buttons. It’s handy to have these instructions easily visible, but the eclectic nature of it all is sure to put some minimalists off the device entirely.

As previously mentioned the GBD-H1000 comes with a total of five unique sensors. These sensors track your heart rate, altitude, temperature and the immediate barometric pressure, while a compass is on hand to help you if you ever get lost in the middle of a park run.

The combination of all of these sensors ensures that users have no shortage of workout information to cycle through in the accompanying G-Shock Move app. The app itself is somewhat no-frills, but that can be chalked up to the H1000’s dedication to the running experience. 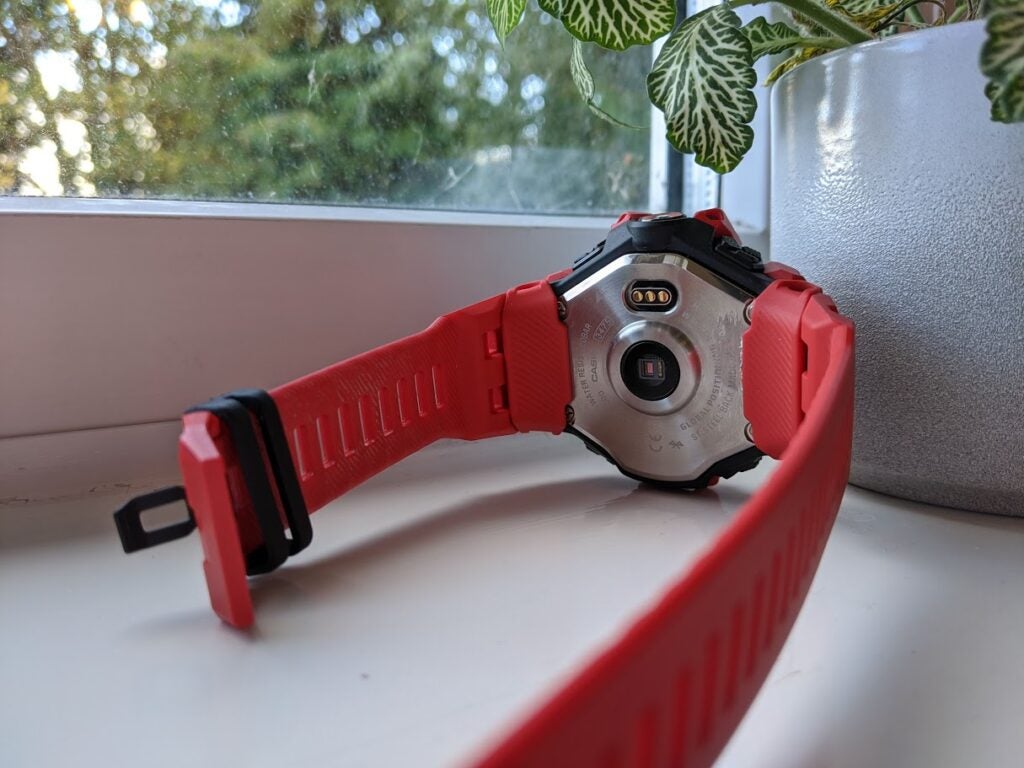 The watch can also latch on to a GPS signal without the use of a phone. In my experience, it takes just under a minute for the H1000 to find a GPS signal, which is fairly disappointing as it holds back the ‘run’ button’s promise of getting you up and out there in no time.

Running enthusiasts are sure to get a kick out the sheer amount of tracking information offered by the H1000, but I would rather have a watch with half as many sensors if it ensured a better GPS experience.

With that said, the H1000 does boast the accolade of having water resistance up to 200 metres. If only the watch had a dedicated swimming mode that could make use of the feature.

Fitness tracking – get ready to run, run and run some more

If you’re looking to include anything else other than running in your fitness routine, then the GBD-H1000 is not for you. When it comes to fitness tracking, the H1000 will gladly offer running assistance but that’s it. 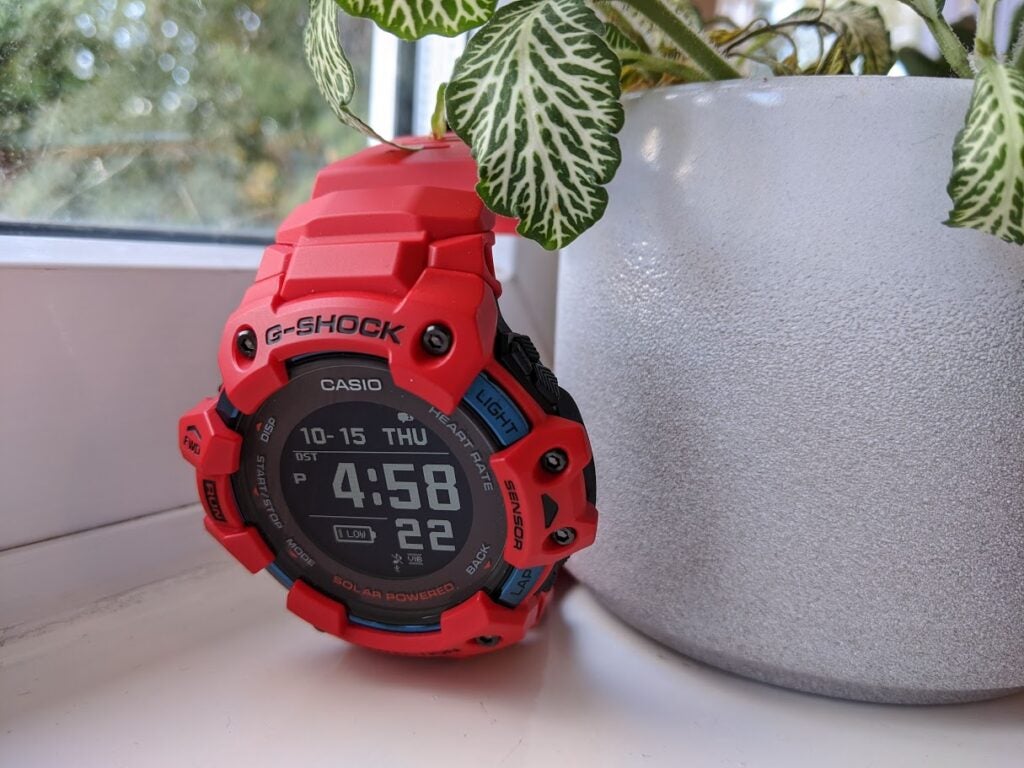 There’s nothing wrong with appealing exclusively to runners, but the H1000 would’ve needed a few tweaks during development to make it a must-have device in this market. For instance, the £379 price tag is absurd. A far cheaper option like the Fitbit Charge 4 will gladly satisfy most runners, and that device also has the ability to track other types of workouts. The value for money just doesn’t quite add up here, especially when the watch’s main heart rate sensor is so underwhelming.

As an example, one run saw the H1000 pick up an average and max heart rate of 128 and 157 respectively. By comparison, an accompanying chest strap heart rate monitor picked up a 148 average and a 182 max heart rate during the same workout. This is a huge discrepancy, one that I’d expect from a far cheaper device.

Similarly, the accompanying G-Shock Move app is surprisingly basic bones. There are a few solid features such as the ability to set a recommended workout plan, one that utilises a VO2 max score to suggest the optimum days for rest, but that’s about it.

At a time when the likes of Fitbit offers an array of medals for beating fitness goals, watch face customisation and even a social platform so you can connect with likeminded folk, the G-Shock Move app just feel a tad forgotten by comparison. The foundation is solid enough, but it could be so much more. 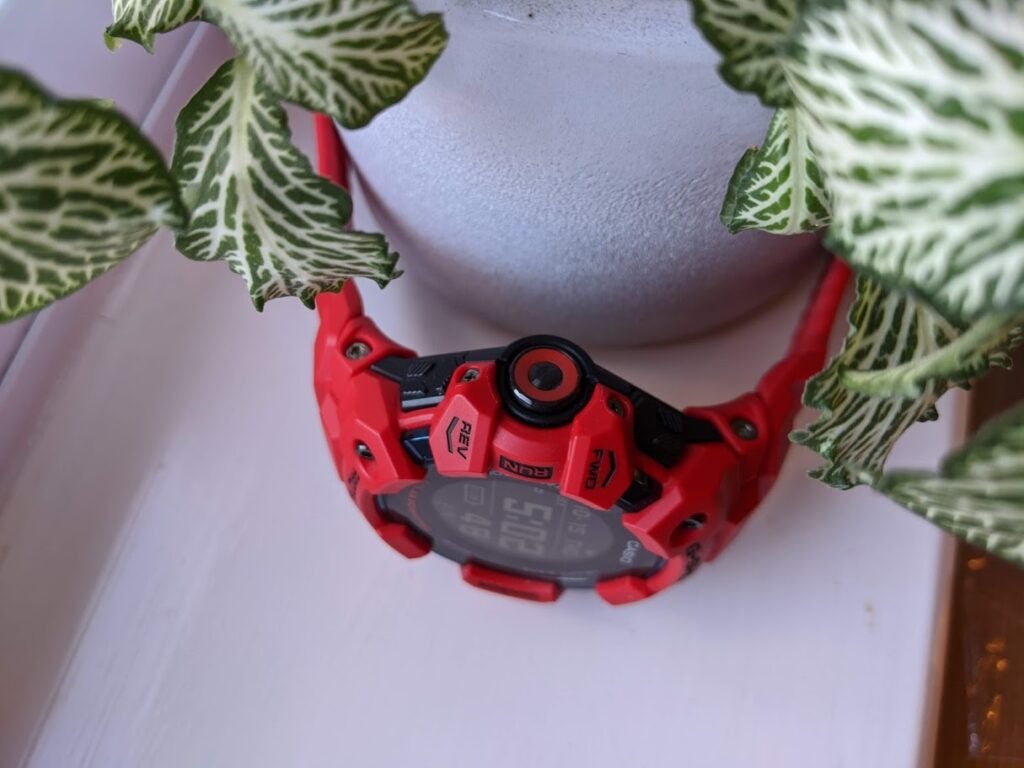 Battery life – outlet and solar charging in one package

For all my gripes about the GBD-H1000’s approach to fitness tracking, the one feature that it absolute nails is battery life. The H1000 has a built-in solar charging system, allowing the watch to source additional energy throughout the day to prolong battery life.

Putting the watch through its paces, with several GPS workouts and notifications switched on, I was able to get roughly seven days of use on a single charge – far better than what you’d expect from a Wear OS smartwatch or even an Apple Watch.

It’s when the smart features are switched off that the H1000’s battery really starts to impress. Casio claims a 12-month battery life in ‘Time’ mode, and after seeing no loss of battery after two weeks, that claim doesn’t seem so far-fetched. Of course, it always begs the question of why you wouldn’t just opt for a regular analogue watch, but it’s a nice feature to have nonetheless.

The Casio G-Shock GBD-H1000 is very close to being a recommended product. If the asking price was a bit cheaper and the heart rate monitor and GPS tracking worked as well as you’d expect, then the H1000 would be a great rough and ready smartwatch for any runner.

As it stands however, the watch’s high asking price, abysmal heart rate tracking and bare bones app culminate in a device that will only appeal to folk who are specifically interested in the G-Shock aesthetic.