A trend that has as yet failed to hit its mark, smartphone connected watches have been on show yet again at CES 2013 where we have gone hands-on  with the Casio G-Shock GB6900AA, looking at the wrist wear’s user alerts and handy location features.

A user experience improving wearable gadget first, a stylish, desirable watch second, the Casio G-Shock GB6900AA sees new meet old as the Japanese manufacturer brings the wristwatch into the modern era, syncing the unit to a smartphone in order to alert users to incoming calls and messages as well as telling them where their handset is located. 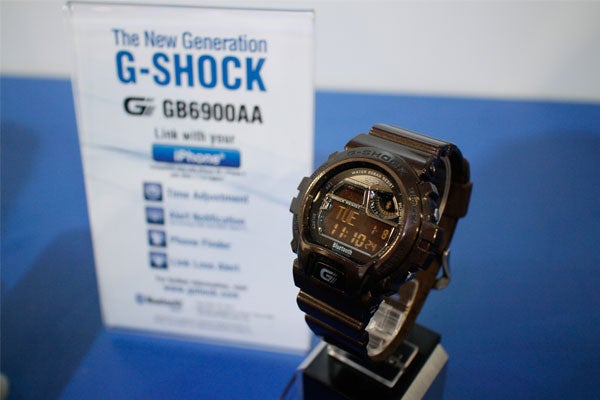 Unlike some smart watches on the market, the Casio G-Shock GB6900AA is built on the backing of strong watch making heritage, ensuring that as a fashionable timepiece the device is on the money and not just a futuristic looking addition that has heads turning for all the wrong reasons.

Again unlike many of its rivals, the Casio G-Shock GB6900AA smartwatch does not play host to a touchscreen interface, instead opting for a traditional digital watch style display with physical controls. Although this will deter many of the more tech savvy consumers in the market, following our hands-on with the device, given the watch’s current level of functionality, it does not lose anything by not having a touchscreen interface.

A comfortable device that, as previously mentioned has been crafted around tried and tested watch designs, the Casio G-Shock GB6900AA is finished with a black rubberised casing and strap that is easily adjustable and will, we expect, allow the technologically advanced timepiece to stand up to the majority of day-to-day rigours that is thrown at it. 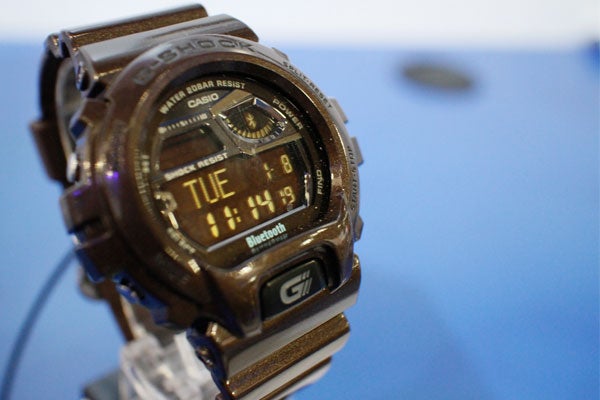 Having tested a number of the Casio G-Shock GB6900AA’s features, we can safely say that the handset connecting smartwatch does what it says on the tin, alerting us during our hands-on with the device to upcoming calls, notifying us when moving out of range of the connected phone, and helping us locate the handset when hidden.

Syncing with the desired and compatible smartphone, such as the iPhone 5, via the low powered Bluetooth 4.0 connection, Casio has suggested that the watch will be able to run and carry out its alerting tasks for two years which the need to charge or replace its standard watch battery.

A feature that sounds too good to be true, we have been unable to test Casio on its claims as yet but stay tuned for a full Casio G-Shock GB6900AA review in the near future for a more in-depth look at the device’s battery usage. 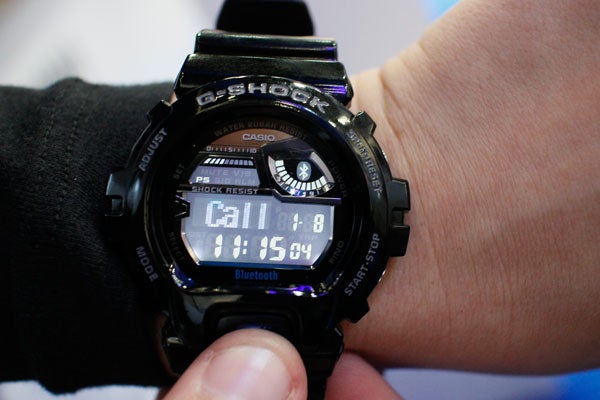 With call and mail alerts being displayed directly on the watch’s face, the Casio G-Shock GB900AA is brilliant for those who often have their phone on silent, not only displaying an ‘Incoming Call’ message on the screen, but vibrating on our wrist to further notify us of the attempted communication. With mail alerts following a similar vein, the Casio smartwatch helps reduce the risk of missing calls and communications.

What’s more, the Casio G-Shock GB6900AA, which of course uses its display primarily to tell the time and which features a handy integrated light letting you see at night, can works in reverse, sending a signal to your handset at the touch of a button to locate the device if misplaced.

Whilst this ‘find my phone’ feature worked well during our hands-on with the Casio G-Shock GB6900AA watch, causing the connected handset to ring, further testing will again be required during the full review at a later date to discover the true usefulness of this ability, based on range and ability to work in less staged situations.

Are smartwatches the future, or is offering smartphone alerts on your wrist an expensive and lazy way of having to avoid intermittently checking your handset, a task which is far from strenuous in itself? Share your thoughts on the matter with us via the Trusted Reviews Twitter and Facebook feeds or through the comment boxes below.