Casio’s Exilim range has been in existence now for over four years, starting with the January 2003 launce of the original 3-megapixel EX-Z3. Since that time it has remained at the forefront of camera design, with a large and well deserved share of the market for stylish high-performance ultra-slim compact cameras. It continues to face some stiff competition though, from Pentax’s Optio range and some models from Panasonic, Nikon and Olympus, but primarily from the formidable Canon Digital IXUS range. 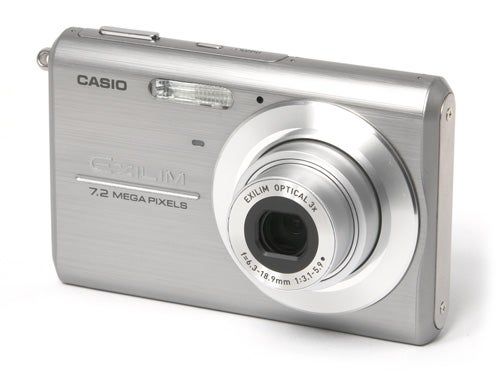 One of the latest models in the Exilim range is this, the 7.2-megapixel EX-Z75. Although the “Z” series aren’t sold on their slimness (that’s the “S” series) it is a marvellously compact camera. It measures 95.4mm wide by 60.6 tall by only 19.6mm thick, and that’s across the thickest part, including the lens and monitor. Across the thinnest part of the body it’s just 16.2mm, and that’s without using BenQ’s trick of a tapering body shape. Weighing just 122g dry, it’s small and light enough to slip into any pocket or handbag. 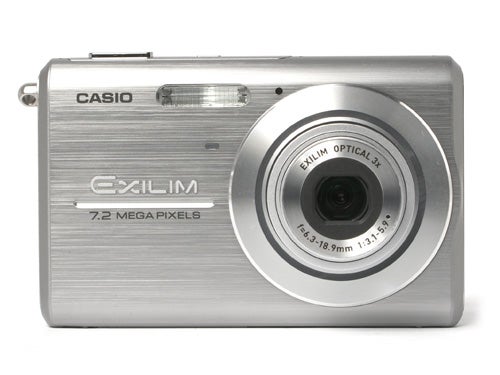 Considering that price, it’s hard to believe just how good the EX-Z75 actually is. For starters it’s a great looking camera. It has an all-aluminium body finished in an attractive brushed texture, with a polished bezel around the lens. As well as the silver version seen here it’s also available in black, blue or pink. The shape and style is clean and simple, with a round-ended profile and bevelled corners. The controls are laid out in an attractively high-tech looking pattern, but still manage to be logically positioned for easy operation. On the back is a large 2.6-in wide-format monitor which, while relatively low resolution at only 114k pixels still manages to be bright and very fast. Overall build quality is superb, and the fit and finish of the body panels and controls is very good. The card/battery hatch has a metal hinge. Despite its low weight and slender shape, the camera feels pleasantly solid and businesslike in the hand. 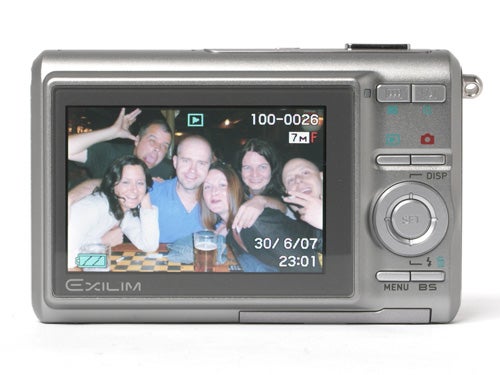 Performance has always been a strong feature for Casio cameras, and the EX-Z75 is no exception. It starts up in a little over 1.5 seconds and shuts down again in about the same time. The AF system is very quick, one of the quickest I’ve seen on a compact. In fact testing it alongside the Canon IXUS 75 it proved to be exactly as fast as that camera. It also focuses quickly and reasonably reliably in low light, although the lack of an AF assist lamp means it won’t focus in complete darkness. The flash range is about average for this type of camera at 3.5m, but frame coverage is excellent, and the flash will work in continuous shooting mode, although obviously is does run a bit more slowly. Without the flash, single-shot mode cycle time is an impressive 1.7 seconds, while in continuous shooting mode it can manage a shot every 1.1 seconds and keep this up until the memory card is full. In video mode it produces the now standard 640 x 480 resolution at 30fps, although it also has two lower resolution modes. 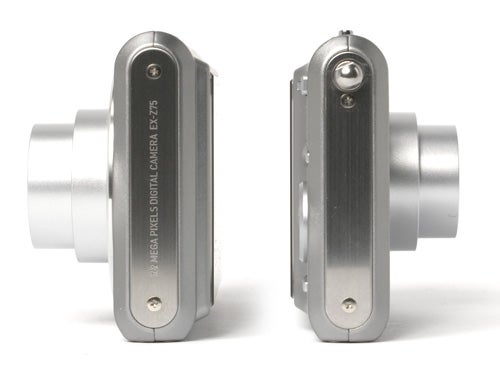 The camera is powered by a relatively small 700mAh Li-ion battery, the duration of which is claimed to be 260 shots, which seems reasonable. I took about 120 shots with it, and the battery indicator was showing two out of three bars when I was done. As for card capacity, thanks to the very low file compression, a 1GB card is enough for approximately 224 shots at maximum quality.

One feature that is lacking from the Z75’s specification is any sort of image stabilisation. It has a feature that Casio calls “Anti-Shake DSP”, but all this does is increase the ISO setting in low light or at telephoto zoom to produce a faster shutter speed, reducing the effects of camera shake or movement blur, but at the cost of reduced picture quality. I really wish camera companies would stop doing this. By giving a fancy high-tech-sounding name to a simple sensitivity increase they are making a cynical attempt to fool the less-informed buyer into thinking that the camera has features and capabilities that it simply doesn’t have. Fortunately you read TrustedReviews so you’re not so easily fooled, but I’ve no doubt that some people will buy this camera thinking that “Anti-Shake DSP” is the same of a proper optical or moving-CCD anti-shake system, which it patently isn’t. In fact, like the thrice-accursed digital zoom, I’d recommend turning off any such ISO-boost anti-shake systems and manually setting the ISO to minimum, thus ensuring maximum picture quality. If you need extra stability, brace the camera on a solid surface or buy a pocket tripod. 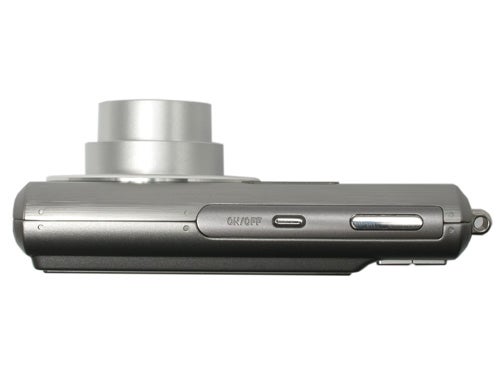 This kind of cheap marketing tactic is doubly annoying, because there are plenty of other reasons to buy the Z75. It’s a great little camera with plenty going for it. It has the same on-screen menu system first seen in the superb Exilim EX-S770, which is very quick and easy to use. It has 33 Best Shot modes, including options for restoring colour to old photos, or for copying business cards. It even has an optional waterproof case, secure to a depth of three metres, ideal for holiday snorkelling. 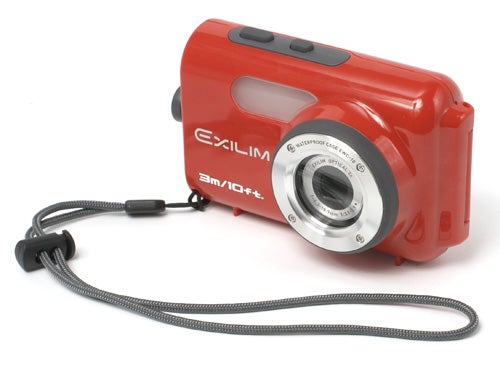 It also has extremely good image quality. Casio used to use Pentax or Canon lenses in its compacts, and the lens on the Z75 does look very similar to the lens on the Pentax Optio M30. The level of detail is very good, and overall sharpness is also good although it does drop off in the far corners of the frame at wide angle. There is also noticeable barrel distortion at wide angle, although to be fair it’s about average for a pocket compact. 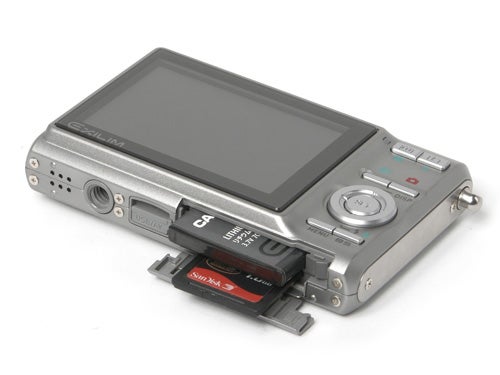 Exposure metering is superb, and colour rendition is spot on, even under unusual lighting conditions. The camera also uses very low compression in Fine quality mode, resulting in JPEG image files which average around 4MB, very large for a 7MP camera, but also producing no problems with compression artefacts. Noise control is also very good, with usable images at 400 ISO, although the maximum 800 ISO is best avoided except under extreme circumstances. Unfortunately the Anti-Shake DSP function can and will set 800 ISO to give a faster shutter speed, so it’s worth avoiding for this reason. Thankfully there is a menu option to turn it off, in which case the auto ISO function doesn’t seem to go above 200.

Another outstanding pocket compact from Casio, the Exilim EX-Z75 is an ideal camera for general and social snapshot photography. It is well made, sensibly but attractively designed, very easy to use and has much better performance than its low cost would suggest. Picture quality is very good as well. It may lack a few features such as image stabilisation and an AF assist lamp, but on the whole it is excellent value for money. 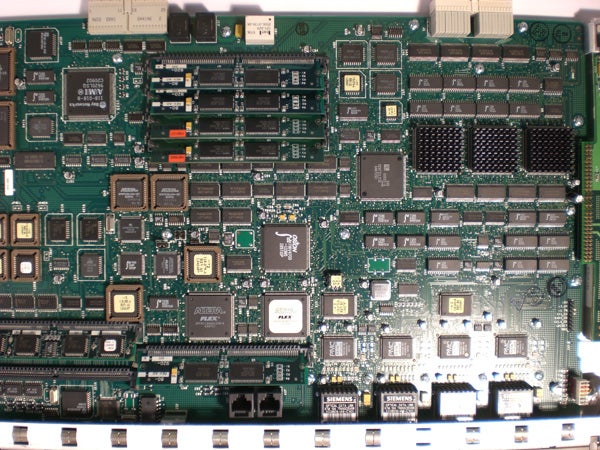 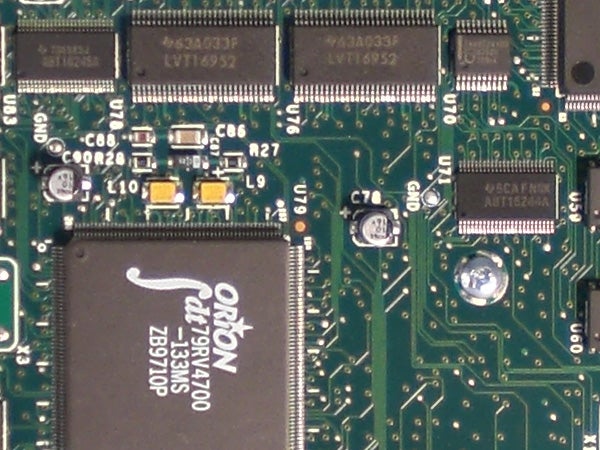 At the minimum 50 ISO image quality is very good, with no noise or compression problems and lots of fine detail. 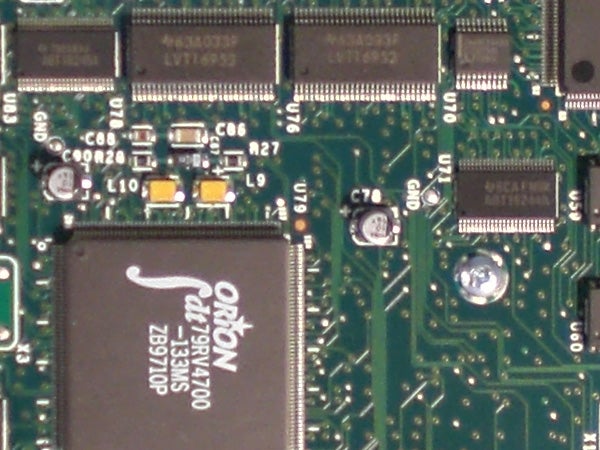 There is a hint of blurring at 100 ISO, but that may be due to camera shake. 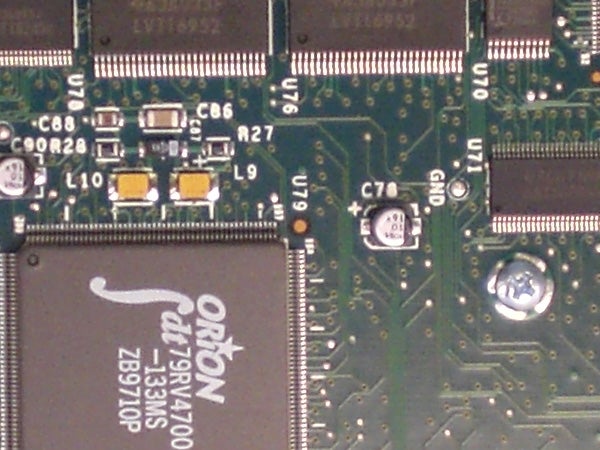 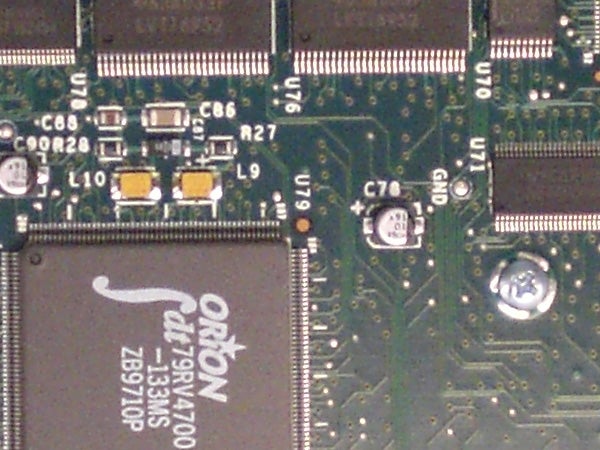 There is slight noise visible at 400 ISO. 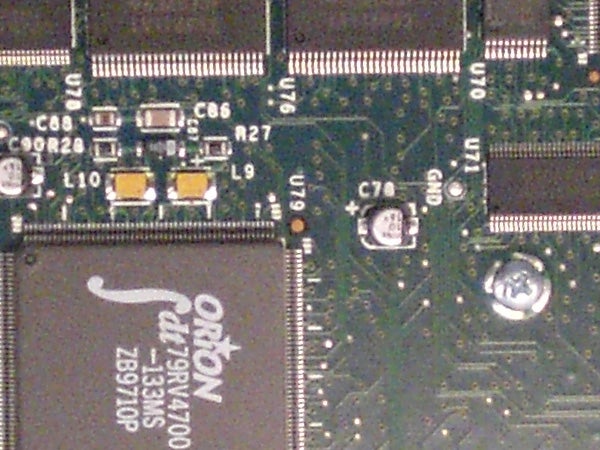 At 800 ISO the image quality isn’t completely terrible, but the level of fine detail is much lower. 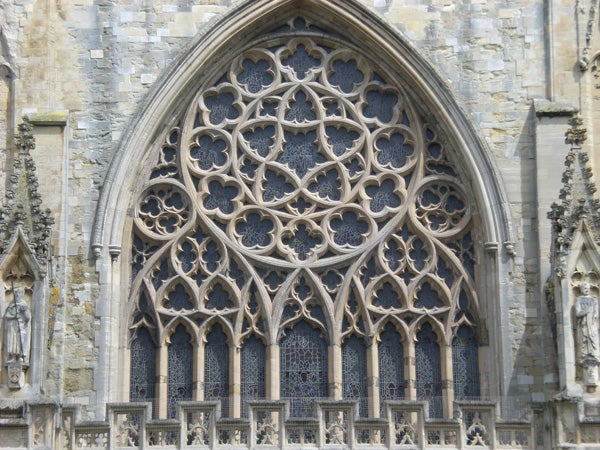 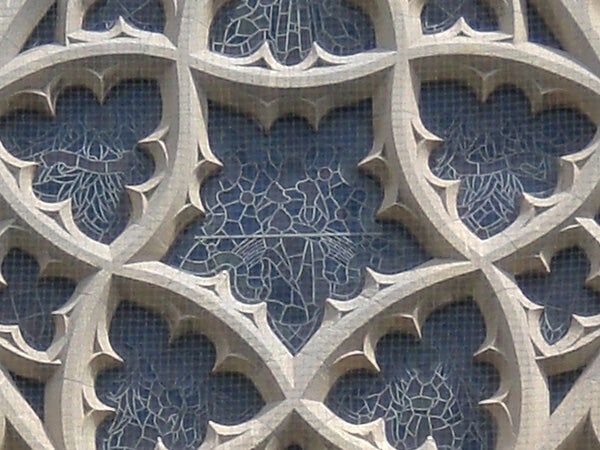 The high quality lens produces good centre detail, and the excellent Exilim processing engine makes good use of it. The level of visible detail is outstanding for a 7MP compact. 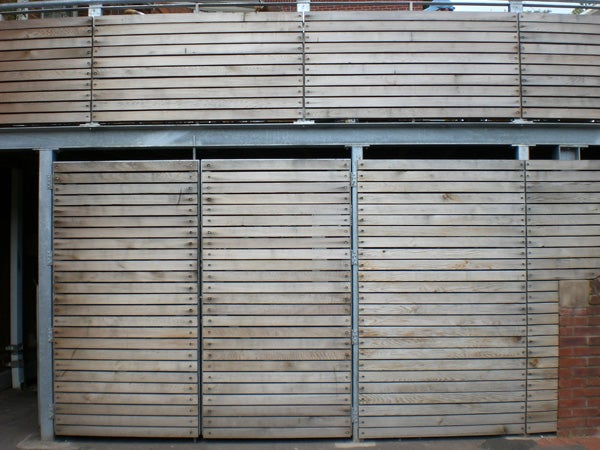 The lens does however produce noticeable barrel distortion at wide angle, as to nearly all 3x zoom pocket compacts. 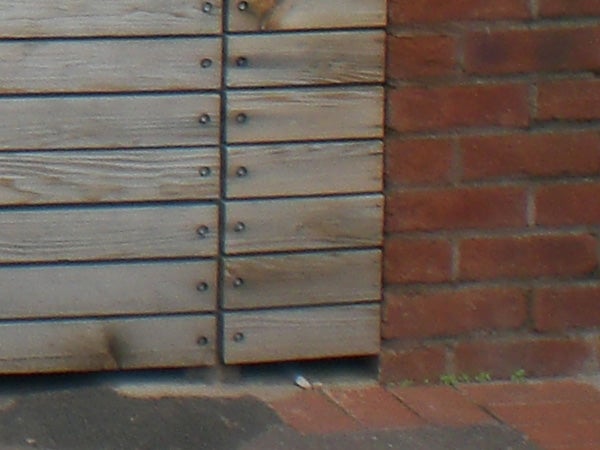 The sharpness also drops off in the far corners of the frame. 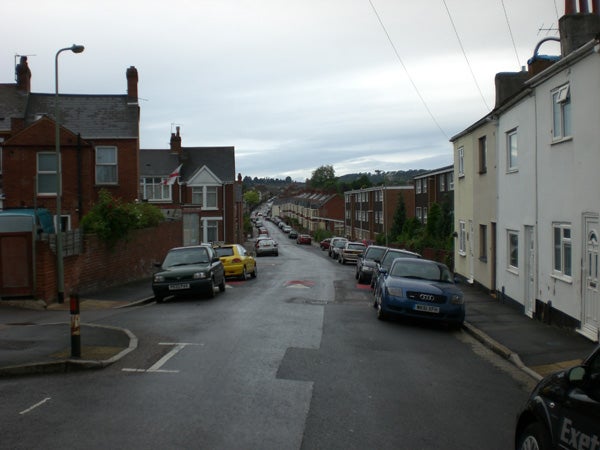 I wish this weather would brighten up. It’s hard to take interesting photos in the rain. This was taken at the wide end of the zoom range, while standing in the middle of the road. Don’t try this at home kids. 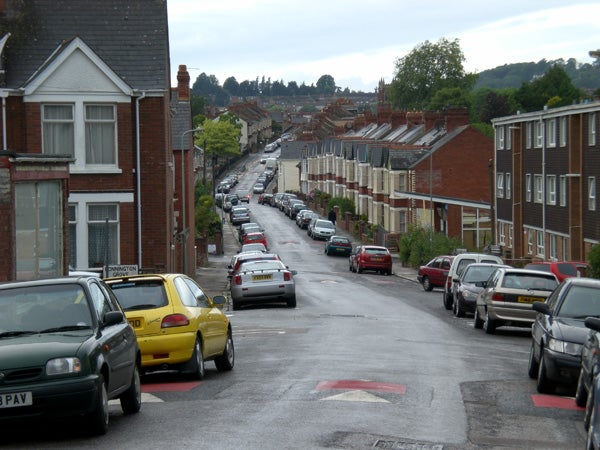 This was taken from the same position at the telephoto end of the zoom. 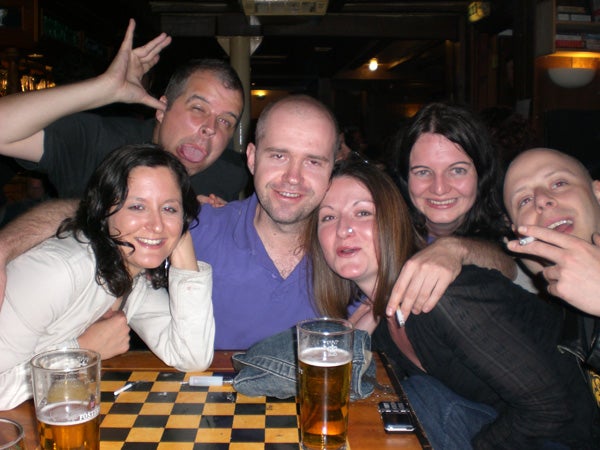 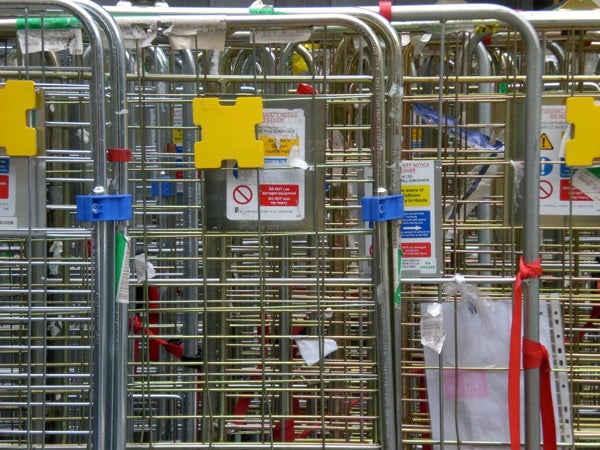