Back in February I reviewed the then-new five megapixel Casio Exilim EX-Z50, and was very impressed by its combination of stylish design, ease of use and quick performance. However I did discover a few problems with picture quality, mostly associated with the lens.


The Z50 has now been replaced in Casio’s extensive model range by this, the new EX-ZX500. With a list price of £279.99, but available for as little as £192 if you shop around, it is cheaper than its predecessor and compares well with rival models in this sector of the market. It is more than just an improvement of an existing camera, it is a completely new design with many new and impressive looking features. 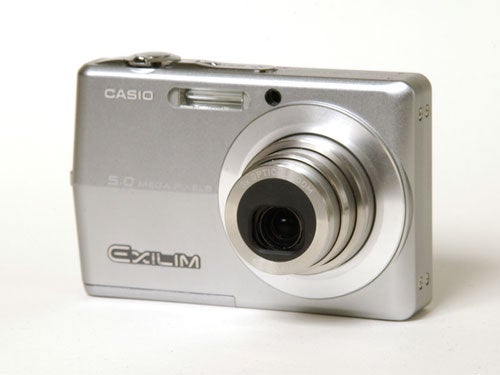 The EX-Z500 is a very slim and compact camera, similar in overall style to Pentax’s Optio S range. Previous Casio compacts had made use of Pentax’s innovative Sliding Lens System, allowing them to be among the slimmest digital cameras on the market, but the Z500 appears to have a completely new lens. It is similar in design and appearance to the Pentax system, but it is physically smaller, giving the camera a thickness of just 20.5mm. It also opens and closes more quickly, giving the EX-Z500 a start-up time of about one second. It has significantly better optical performance too, but we’ll come back to that later.


The exterior design of the EX-Z500 is extremely sleek and sophisticated. It has a strong all-metal body, and is available in either black or silver, both colours having an attractive matt brushed finish. The casing is very resistant to scratches, as is the LCD screen. I accidentally carried the camera in a pocket with my keys for several hours, but it survived without a mark. 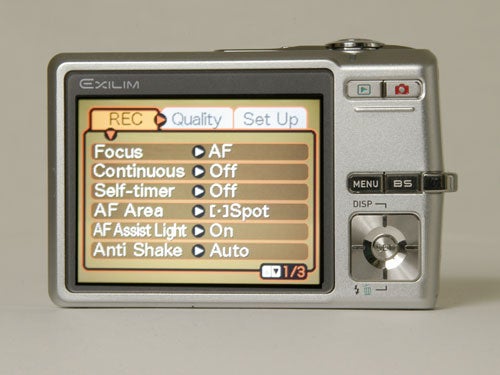 
The main reason for the lack of controls is that there simply isn’t room for them. The rear panel is dominated by the huge 2.7in LCD monitor. With 153,600 pixels it is also exceptionally sharp.

Once you start investigating the menu, you find that there is a lot to play with. Saturation, contrast and sharpness are fully adjustable, as is flash intensity, metering mode and AF mode. There are filters that can be added, including sepia, B&W and six different colour tints. Focusing modes include manual focus and pan-focus, as well as macro and infinity. Many previous Casio digital cameras have had amazingly good macro performance, some focusing as close as 2cm, but it seems that this feature has been dropped from the Z500. Its closest macro focusing range is 17cm, not particularly close at all. Nonetheless the EX-Z500 does offer a level of versatility that is rare in a compact camera. It’s just a pity that the control interface doesn’t make it a bit more accessible. 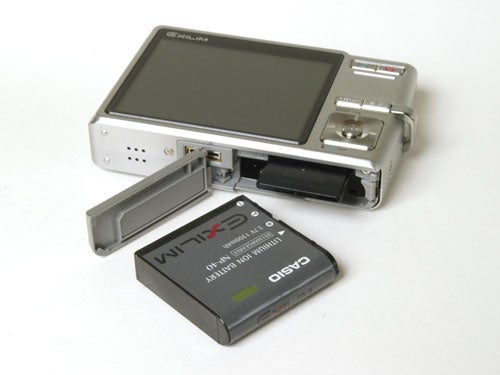 Apart from the menu button and D-pad, the only other controls are the playback and record buttons, which unfortunately are positioned just where the zoom buttons are found on many cameras, so the first few times I used it I accidentally switched to playback mode when I was trying to zoom in. Once I got over that though I found the camera to be very easy to use.


Especially useful is the Best Shot mode, controlled by the fourth and final control button. Best Shot is a long-standing feature on most Casio Exilim models. It’s like a Scene mode setting, but with a lot more options. Simply browse through the menu of sample shots and chose the one closest to the one you are trying to take, and the camera will automatically set itself up to take this kind of shot. There are 30 samples to choose from, plus the ability to add more, including making your own. Existing Best Shot options include the usual portrait, landscape, sports and night scene settings, but also include more unusual options such as pets, natural green, autumn leaves, soft flowing water and fireworks. The special modes for capturing business cards, documents and whiteboards also include a neat auto-correction feature that detects the edges of pages and corrects the perspective. 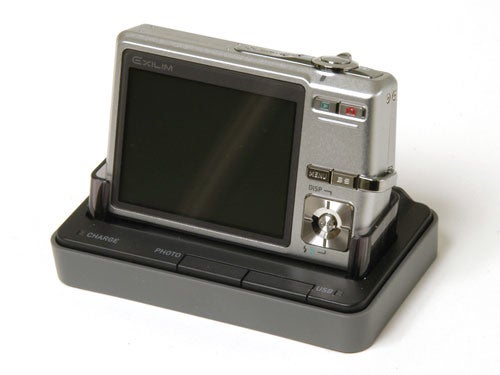 The EX-Z500 has a good movie mode, shooting at 640×480 resolution and 30 frames per second with audio. It can shoot until the memory card is full. Casio also claims extraordinary performance figures for the EX-Z500’s battery. It uses a big 1300mAh Li-ion cell that is almost twice the size – both physically and in terms of capacity – as the one in the previous model. Casio claims that it is good for 500 shots. I didn’t have the opportunity to fully test this claim, but given the figures it doesn’t sound unreasonable. The battery is charged via a supplied docking station, which also carries the USB 2.0 connection and the video output socket.

Thanks to both the new lens and Casio’s Anti Shake DSP (Digital Signal Processor) the image quality is also very good. The Anti Shake system allows an extra couple of stops for hand-held shooting at long exposures, down to about 1/15th sec.

The previous model suffered from blurring at the edges of the image at wide angle, but I’m happy to report that there is no such problem here. Image quality was excellent for a camera in this class, with superb colour reproduction, as well as quick and accurate focusing and exposure in most lighting conditions. The EX-Z500 has an AF illuminator, so it can focus in very low light, at least at close range. The flash is also good at medium range, but tends to drop off very quickly after about two metres, or over-expose horribly at ranges closer than about 50cm.


The problems which the Z50 suffered with image noise have been completely cured. The Z500 has excellent noise control, with usable images produced at 400 ISO, and beautifully smooth images at lower speeds. 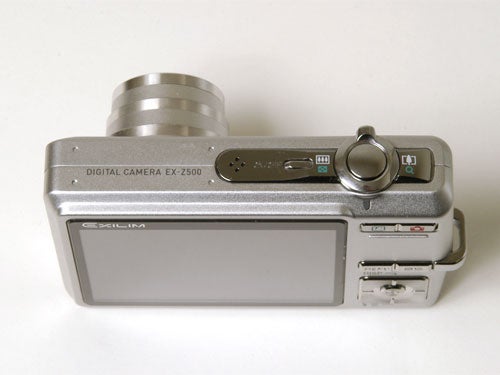 There is one last thing worthy of note however. My review sample camera worked perfectly for a couple of days, but then the lens started making a loud rasping sound when focusing. It still worked perfectly, but it sounded like it wasn’t enjoying it. This is most likely an isolated problem, but one to watch out for.


The Casio Exilim EX-Z500 is a superb mid-range pocket snapshot camera at a competitive price. It has style, performance, a good list of features and the picture quality to match. The Best Shot mode will be useful for beginners, while the versatile menu options will appeal to the more experienced user. All in all, an excellent little camera.

At the minimum ISO setting of 50 the image quality is superb, with excellent detail and sharpness and no noise. 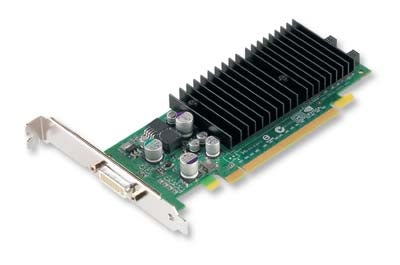 At 100 ISO there is still no image noise and the picture quality is excellent. 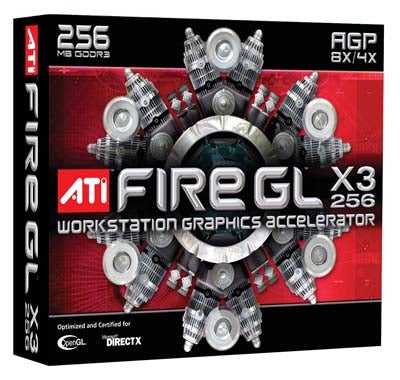 At 200 ISO the image noise is minimal and the picture quality remains very high. 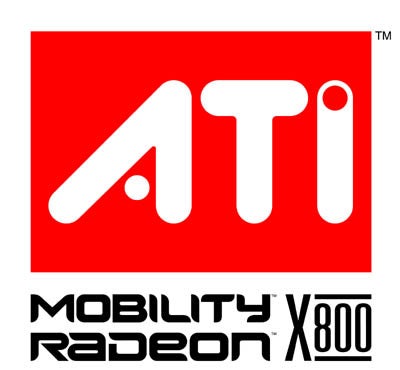 At the highest manual setting of 400 ISO there is some image noise in the darker areas but quality is still very high. 800 ISO is available, but only in night scene automatic mode.

The EX-Z500’s lens does suffer from slight barrel distortion at wide angle, but the effect is not pronounced. Edge sharpness is good.

This late afternoon shot of Exeter’s famous cathedral shows how good the EX-Z500 is at capturing subtle colours.

The built-in flash has limited range. This shot was taken at a distance of about 4 metres.

Closest focus range is only 17cm, which is nothing compared to the power of the dark side.