Back in May I reviewed the impressive 10.1-megapixel Casio Exilim EX-Z1050, which at that time was the new flagship of the Exilim Zoom range. However here we are just four months later and I’m reviewing a new, even more powerful Exilim Zoom, the 12.1-megapixel EX-Z1200, which is the new top of the range. 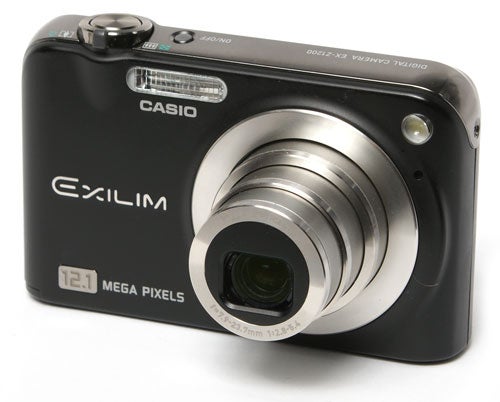 I’ve frequently had a bit of a rant about the marketing-led progression of ever-more-powerful sensors, but the point bears repeating. A typical 10-megapixel image is 3648 x 2736 pixels, while the images produced by the EX-Z1200 and Sony’s DSC-W200 are 4000 x 3000 pixels. While that may sound pretty huge, it’s only a difference of 176 pixels horizontally and 132 vertically, or less than a ten percent gain in actual image size. Considering that the EX-Z1200 is currently retailing for around £190, while the EX-Z1050 is only about £130, you have to ask yourself if an extra 176 pixels is worth a fifty percent higher price.


Fortunately the Z1200 has a lot more going for it than just a larger image size. It is a technically very sophisticated camera with a wide range of features and options, which go a long way towards justifying the price. As well as the 12.1-megapixel sensor it has a 3x zoom, f=2.8 – 5.5, 7.9 – 23.7mm lens (37 to 111mm equiv.), 2.8-inch wide-format 230k monitor, moving-sensor image stabilisation, manual exposure options and 848 x 480 widescreen movie mode. Casio’s Exilim range has been consistently excellent since its inception, with a long series of models that have competed on equal terms for technical merit, performance and quality with the best compact cameras that any other manufacturers have produced, and when handling the Z1200 it is very clear that it is another quality product. 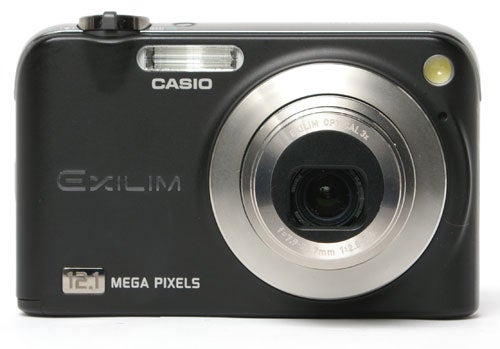 Available in black or silver the Z1200 has an all-aluminium body, but even so it is a solidly made camera. It measures 93.3 x 58.5 x 22.4mm, which is in fact a little slimmer than the Z1050, but it also weighs 152g minus battery and card, which is well above average for a camera of this size, and as a result the Z1200 feels a lot denser and heavier than most of its rivals. This isn’t a bad thing by any means, because it adds to the feeling of quality and makes the camera more stable when shooting at lower shutter speeds. The rather chunky feel and the sensibly-placed rear thumbgrip make the camera solidly comfortable to hold. The overall design is sensibly understated, and the flat profile of the flush-retracting lens and the smooth pocket-friendly curved corners look functional without being plain.

The overall layout of the controls is generally similar to the Z1050 and other high-end models in Casio’s range, with a rotary bezel zoom control and separate buttons on the top panel for shooting and playback mode. Primary control over the camera’s many features is via a row of icons down the right-hand edge of the screen, which are selected by simply scrolling up or down using the D-pad, then left and right to make menu selections. I really like this control system, and consider it to be a good selling point for Casio cameras. The main shooting mode menu, at the top of the on-screen list, has wider range than most pocket compacts. It features the usual Auto snapshot mode, Casio’s signature Best Shot mode and video mode, as well as aperture priority, shutter priority and full manual exposure. The manual aperture selection is more limited than Sony’s W200, with only minimum and maximum apertures available, but the shutter speed range is more useful, with settings of 30 seconds to 1/2000th of a second in 1/3EV intervals. While it’s obviously no substitute for a real semi-pro camera or SLR this does at least offer some creative versatility for the more experienced photographer. 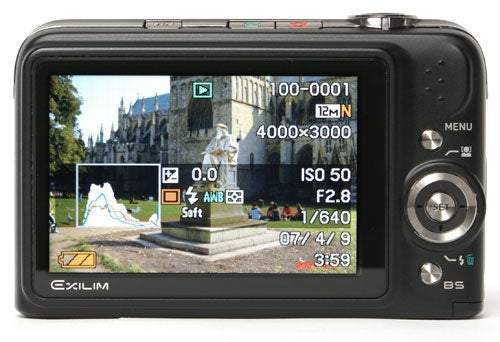 The Z1200 does have one unique feature. Opinions are divided on face detection technology; all the camera manufacturers (or at least their marketing departments) seem to think it’s the best thing since sliced bread, while I and many other reviewers think it’s a largely pointless gimmick that doesn’t work particularly well anyway. However Casio has taken face detection one step further with a feature that even I have to admit is pretty cool. The Z1200 doesn’t just detect and focus on faces in the frame, as conventional face detection systems do; it can actually be programmed to recognise the individual faces of up to 36 friends and family members and give priority to those, so that in a crowd of faces it will focus on the right ones. I tested this feature on a few helpful friends, and I found that like most face detection systems it worked well under ideal circumstances, when the faces in question were well lit, at close range and looking straight into the lens, but was less reliable when the faces were in shadow, partially obscured or turned slightly away from the camera. Again it’s a bit of a gimmick, but it’s a technologically astonishing one. It’s just a pity it’s not really all that useful. 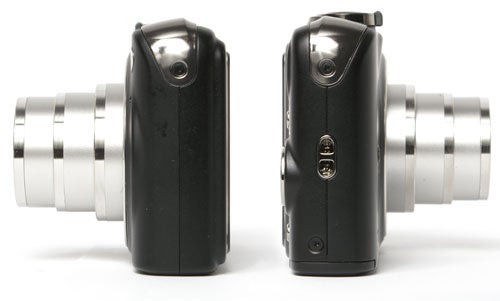 Like the Z1050, the Z1200 features a moving-sensor image stabilisation system, which detects shakes and vibration and attempts to cancel them out, to help produce blur-free images at lower shutter speeds. It works fairly well, producing sharp snaps at 1/30th of a second at full zoom, but shutter speeds longer than this were still prone to camera shake. It’s not a bad system by any means, but it’s not as good as those from Panasonic, Canon or Sony.

The rest of the Z1200 works extremely well however. It starts up in a little over two seconds, which is good, but it is Casio’s brilliant AF system that really stands out. It focuses reliably in around half a second in pitch darkness at a range of well over three metres thanks to an AF assist lamp. In normal lighting it is virtually instant, and again utterly reliable. It has nine focus points, with spot AF, tracking AF, manual focus, 6cm macro and infinity focus available as well. In single-shot mode it can shoot a frame approximately once every two seconds, which is quicker than average. In normal speed continuous mode it shoots approximately one frame every 1.3 seconds, while in high-speed mode it can shoot at around three frames a second, although this is limited to three megapixels. In both cases shooting can continue until the memory card is full. As well as this there is a continuous mode with flash, and a bizarre “zoom continuous mode, which shoots both a normal picture and a digitally zoomed version simultaneously. 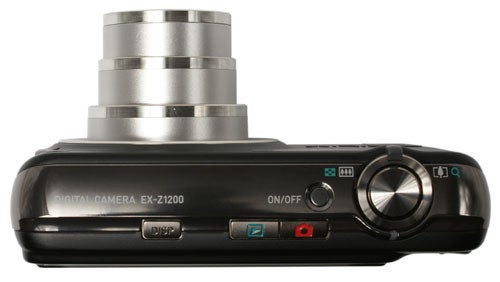 Despite the many well-justified concerns regarding the performance of very high resolution compact camera sensors, the Z1200 produces generally excellent image quality. It uses a slightly-larger-than-average 1/1.7 inch sensor, around ten percent larger in size than the one in the Z1050, and as a result its image quality is more or less identical with that camera. Colour reproduction, exposure and detail are all very good, and dynamic range is also higher than I had expected. Casio has neatly sidestepped the problem of high-ISO image noise by omitting ISO settings above 400 altogether, and judging by the image quality at this setting stopping there was probably a good idea. The only real weak spot is the 3x zoom lens, which appears to be based on Pentax’s aging Sliding Lens System. While it produces relatively little distortion at the wide angle end and none at the telephoto end, it is only really sharp in the centre of the frame, producing significant corner blurring and chromatic aberration towards the edges of the frame especially in wide angle shots. 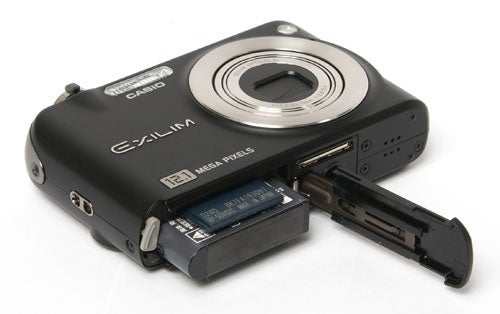 The Casio Exilim EX-Z1200 is a technological marvel, a pocket-sized compact camera packed with advanced features and useful creative options. It has superior build quality, good handling and class-leading performance, and decent image quality. The only real question is whether you feel it’s worth paying a significant premium for a trivial increase in image resolution. 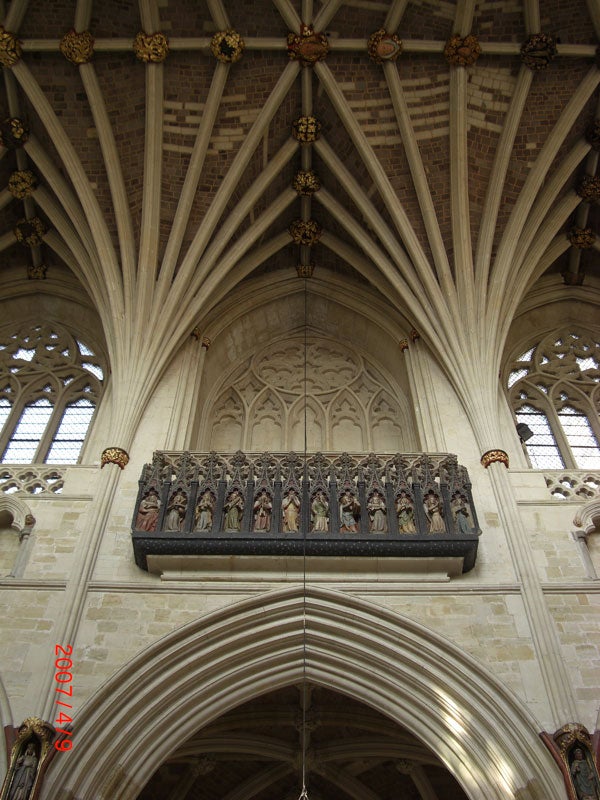 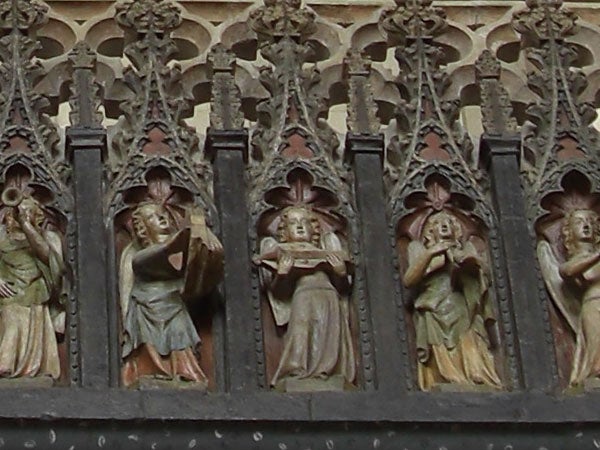 At the minimum sensitivity of ISO 50 the image is noise-free and extremely detailed. 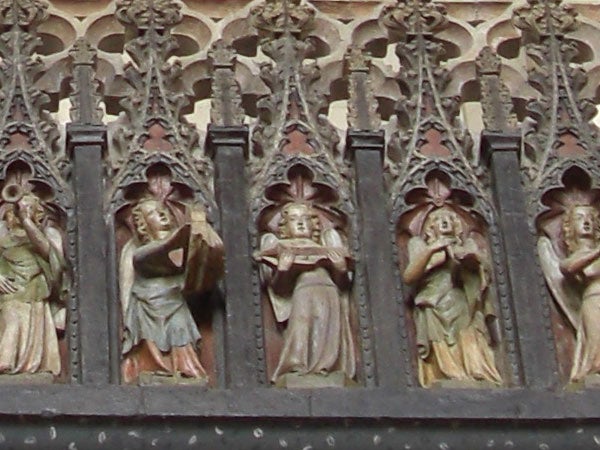 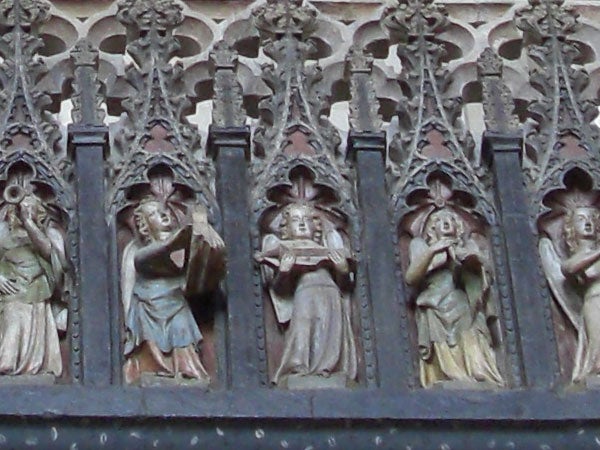 Something seems to have happened to the white balance at ISO 200, and there is some image noise visible. 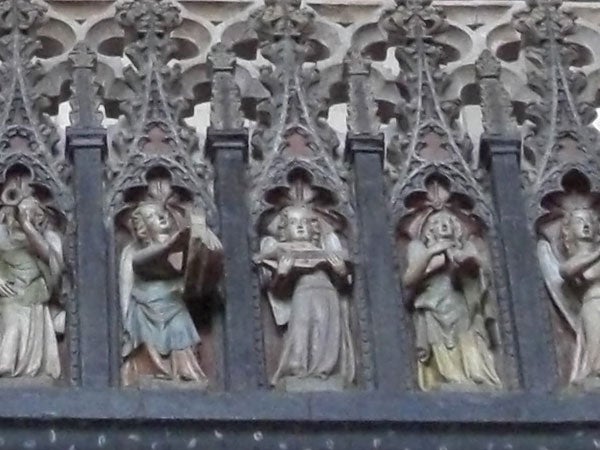 Casio has wisely limited the Z1200 to ISO 400, but even so the image quality is noticeably reduced. 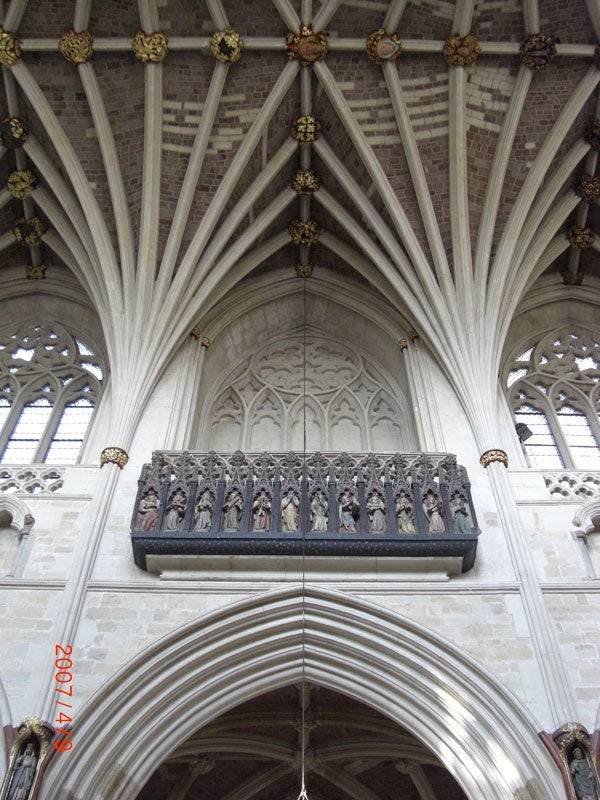 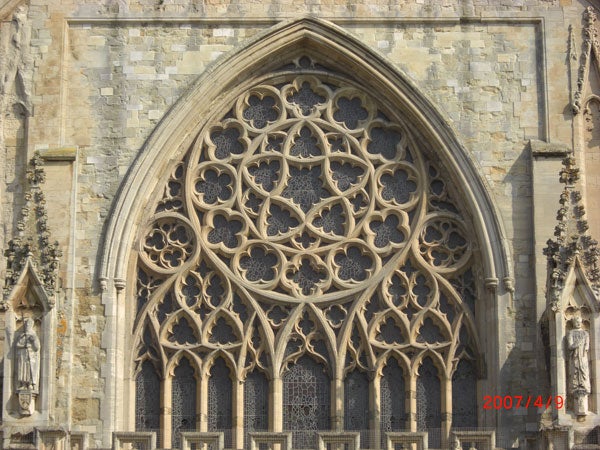 Here’s my usual detail test shot of the West Window of Exeter Cathedral, for you to compare with other cameras. See below for a full res crop, or click to see the whole picture. Please excuse the time stamp on this and some other images. Whoever had this review sample before me forgot to switch it off, and I didn’t notice it at first. 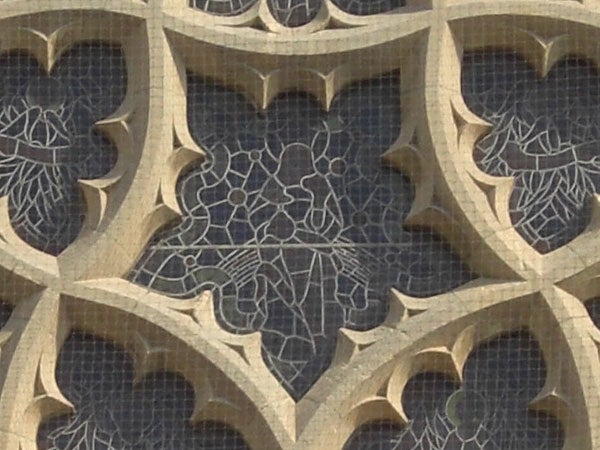 The level of detail near the centre of the frame is exceptionally high, as you might expect from a 12MP sensor. 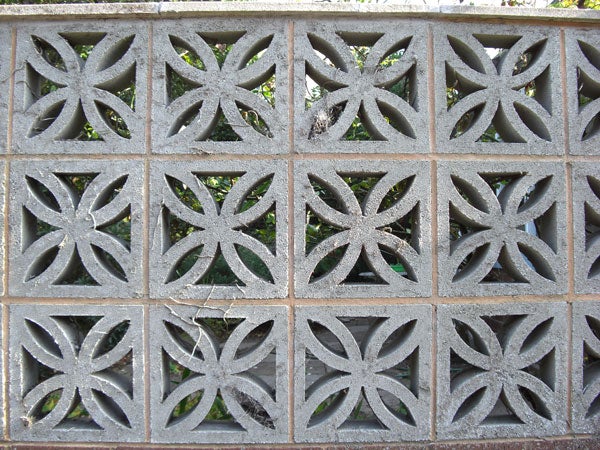 The lens produces some wide-angle barrel distortion, but it’s not too bad. 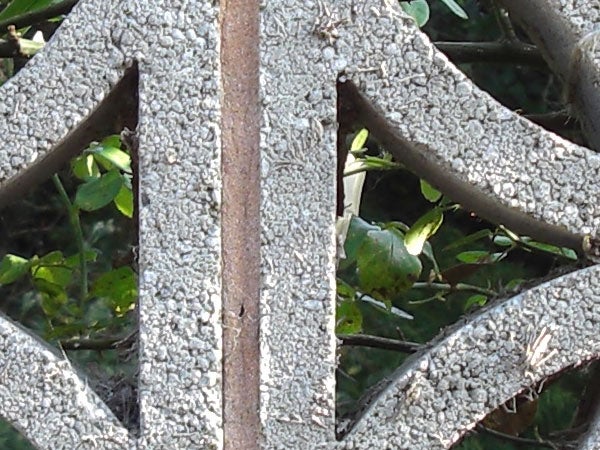 The centre of the frame is very sharp and detailed… 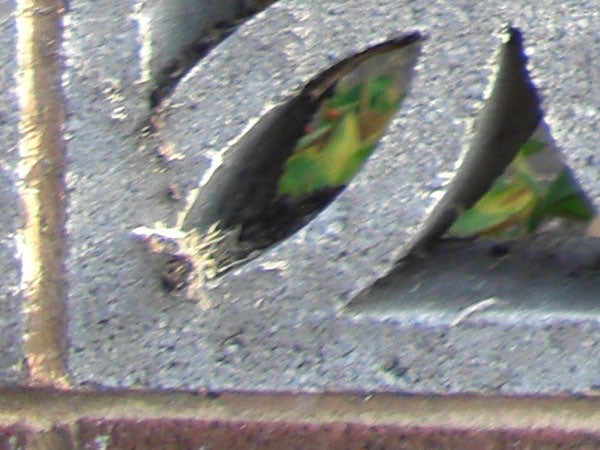 …however the edges of the frame are blurred and show significant chromatic aberration. 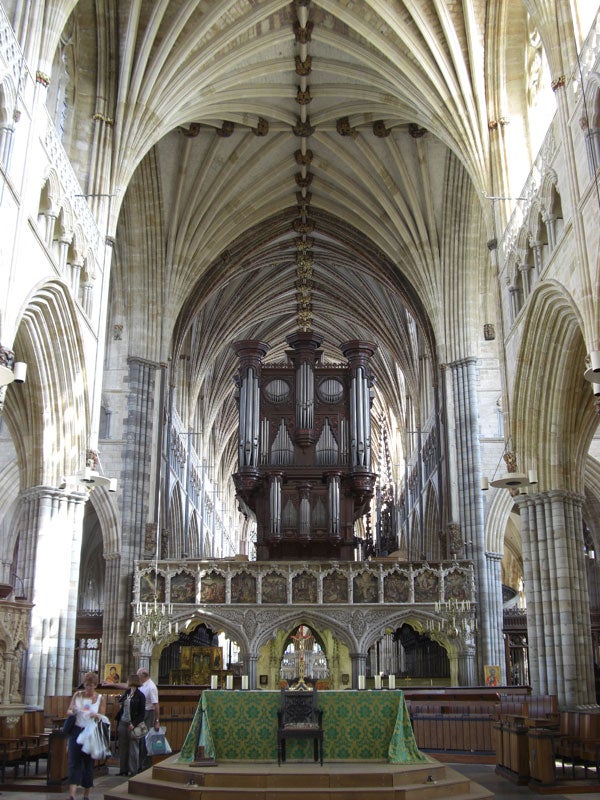 The wide angle end of the zoom range is equivalent to 38mm, which is less wide than average. 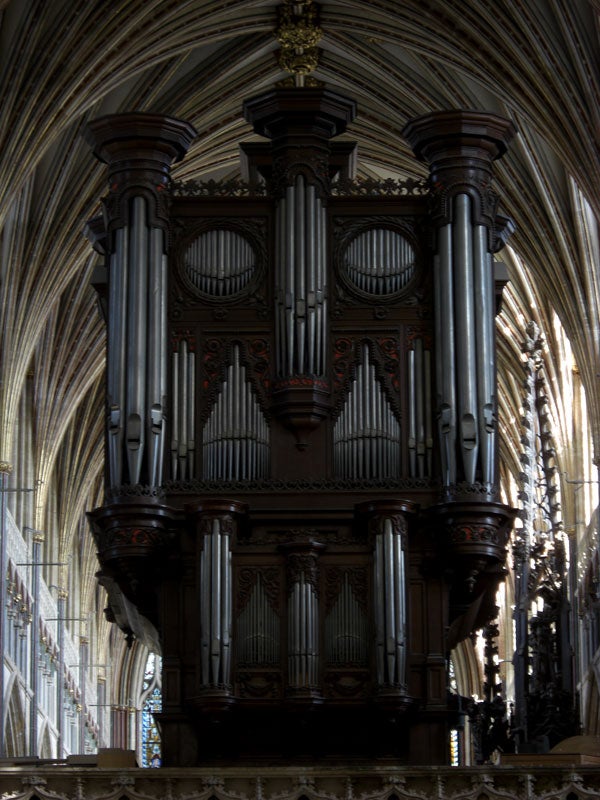 The telephoto end of the zoom is equivalent to 114mm. Amusingly, the face detection system thought that this was a human face. 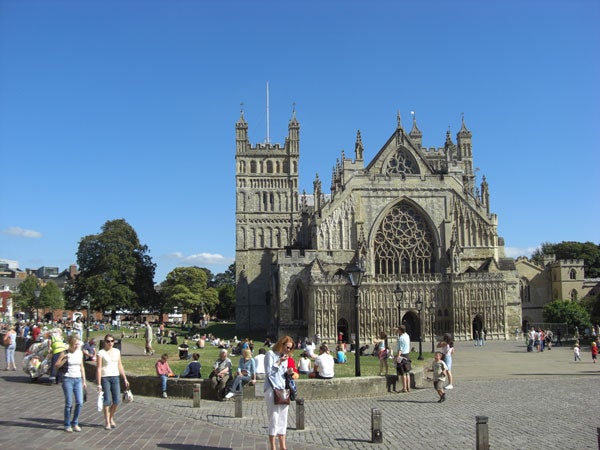 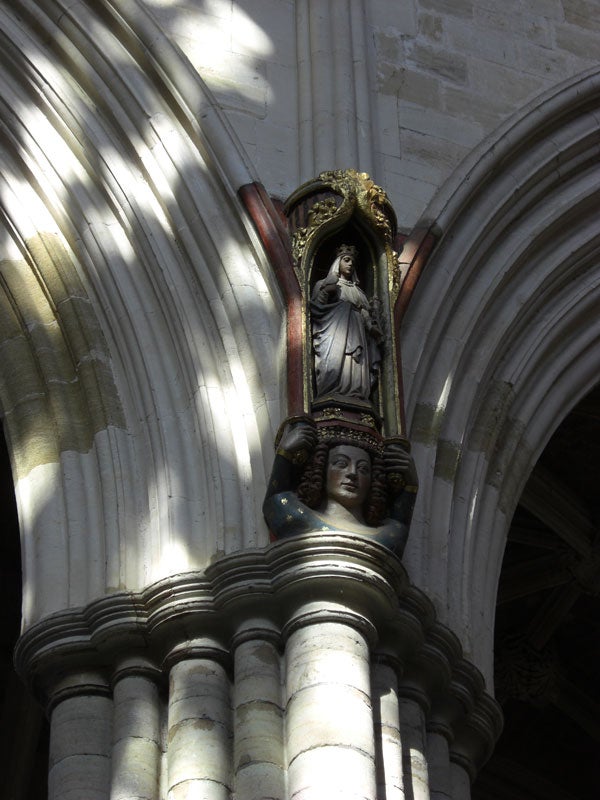 The level of contrast and dynamic range are also good. There is highlight and shadow detail in this shot. 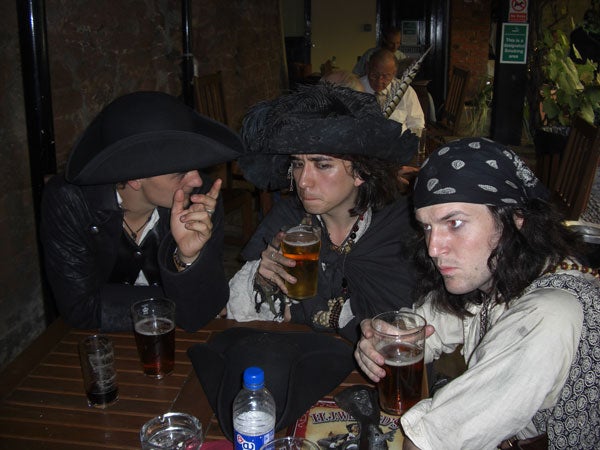 Fact: There is a direct link between the reduction in the number of pirates since 1800 and the increase in global warming. Protect the environment; support your local pirates! Also, the fill-in flash works very well.