It’s pretty much an accepted axiom that if you want a stylish ultra-compact camera, you’re going to be limited to a 3x zoom lens. The corollary of course it that if you want a longer zoom range you’ll end up with a much more bulky camera. There are a few cameras such as the Ricoh Caplio R6 and Panasonic Lumix TZ3 which provide wider than average zoom range in a relatively compact shape, and there are one or two fairly small 4x or 5x zoom compacts available, such as the Canon IXUS 800 IS or the Sony Cyber-shot T100 (review coming next week), but on the whole it is true that most small cameras tend to have small lenses. 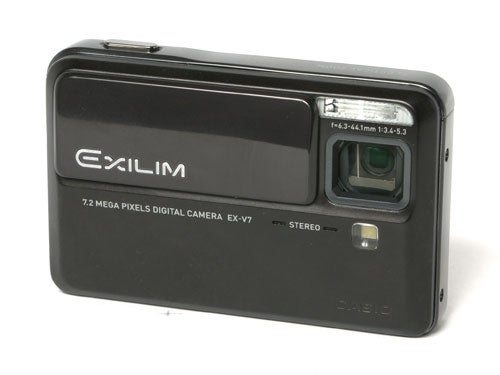 However proving that every rule has an exception, Casio has recently introduced the Exilim EX-V7. The numeral in the name refers to both its 7.2-megapixel resolution, and the 7x zoom ability of its unusual non-protruding lens. The lens configuration means that the camera can be very small. In fact it’s just 95.5 x 59.8 x 25.5mm, and 149g excluding battery and card, which isn’t much bigger than some of Casio’s 3x zoom ultra-compact models. This unusual design comes at a price though. The V7 is currently available for around £245, which is expensive for a 7MP compact. 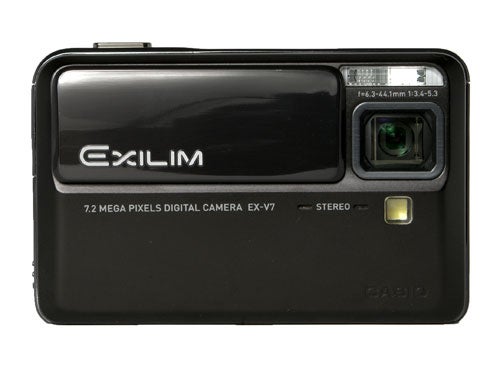 This type of optical configuration, where the zoom lens is mounted horizontally within the camera body and looks out via a prism, isn’t a new idea. It was first used on the Minolta Dimage X in 2002, one of the first truly ultra-compact digital cameras, and on a long and popular series of its successors. However since Minolta pulled out of the camera market last year the technology has gone unused until now. One of the advantages of this type of lens is that it avoids a lot of the optical compromises that can cause problems for other types of compact zoom, and so in theory can produce better optical quality. It is a bit slow though, with a maximum aperture of f/3.4 – f/5.3. Casio isn’t the only one to use this technique; I believe several of Sony’s ultra-compacts use it as well.

As well as its unusual lens, the V7 has another trick up its sleeve. Until now Casio’s compacts have relied on increased ISO settings to reduce the effects of camera shake, not a satisfactory solution since Casio’s image processor doesn’t have the best noise control. The V7 however is the first Casio compact to feature CCD-shift image stabilisation, a very useful feature for cameras with long zoom lenses. I’ve used a number of similar systems, and I have to say I’m fairly impressed with the performance of this one. I found I was able to take sharp hand-held shots consistently at full zoom (266mm equivalent) at a shutter speed of 1/30th of a second, around three stops slower than the recommended speed for that focal length. That’s a pretty impressive performance, since most IS systems only provide a two-stop stability gain. 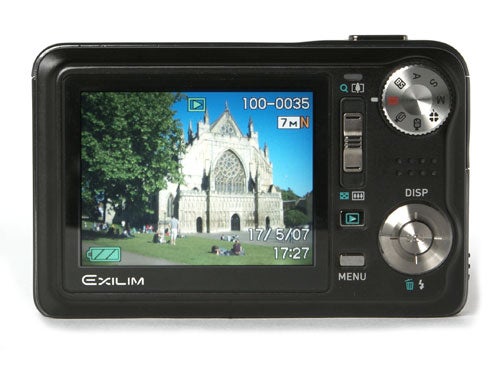 As well as a long zoom and a mechanical IS system the V7 is also not short of photographic features. It has aperture and shutter priority as well as full manual exposure. The available aperture range is limited to just three settings (minimum, maximum or half-way) and the range of shutter speeds in manual mode is only 60 secs to 1/800th (1/2000th in auto), but it does at least offer some degree of creative control.


The V7 also has Casio’s trademark Best Shot mode, this time with 33 settings, including the “Auto-framing” feature seen on the EX-Z1050. I like this feature a lot, and consider it far more useful than face detection. It helps you follow moving subjects, and as long as they are in the frame it automatically crops the image to bring them into the centre of the shot. It does reduce the image size, but it helps enormously with composition of action shots. 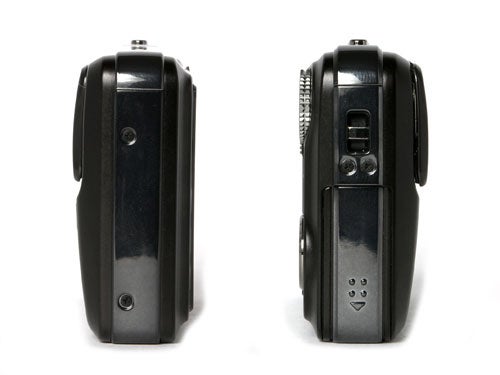 Handling is a bit of a mixed bag. Yes, the camera is light and compact, and fits easily into a shirt pocket, but I have to admit I’m not a big fan of the sliding-cover-doubling-as-power-switch style. The cover moves very easily, and I find it’s all too easy to switch the camera on accidentally while it’s in your pocket. Since there’s no protruding lens to pop out this isn’t going to cause any damage, but it will drain your battery. Another handling issue is the main mode dial. It is positioned directly under your thumb, and turns very easily, which does cause problems with accidentally changing the shooting mode. The edges of the dial are also very sharp, enough to be very uncomfortable on the thumb. If I owned this camera I’d probably take a small file or a scrap of fine sandpaper and smooth it off a bit.

Casio compacts have always had excellent overall performance, and the V7 is no exception. It starts up in around 1.8 seconds, which is pretty quick, and shuts down again even faster. It has three continuous shooting modes: in high-speed mode it can fire a burst of three shots in just under two seconds, in flash mode it can do the same but fire the flash for all three shots, and in normal mode it can manage on average one shot every 1.3 seconds, although the actual speed is very inconsistent. 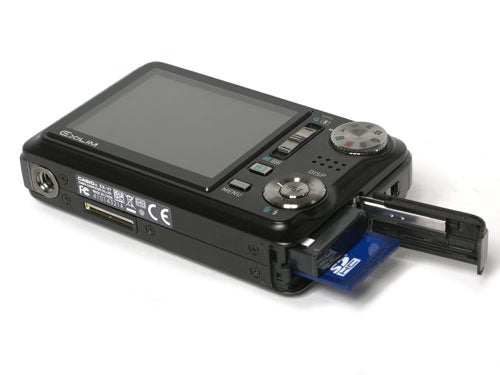 Like all of Casio’s compact cameras the V7 has a superb autofocus system. It has a nine-point AF array, and is impressively fast, locking on to subjects in a fraction of a second with virtually zero shutter lag. Low light focusing is also very good, thanks in part to a blindingly bright AF assist lamp mounted just under the lens, which also doubles as a video shooting light. The V7 has an excellent video mode, shooting at 848 x 480 wide-screen resolution and 30 frames a second, with stereo sound provided by two small microphones just below the lens. The zoom lens can also be used while shooting, which is fairly unusual. 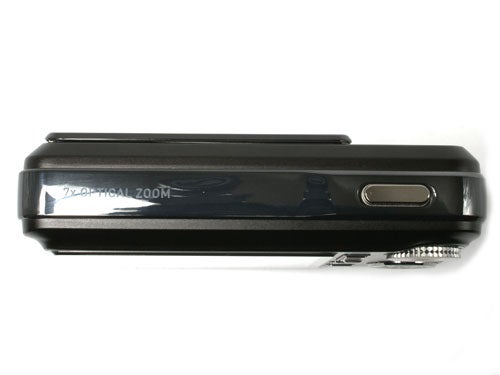 Overall image quality is about average for a 7MP camera with a 1/2.5-in sensor, with the lens providing plenty of fine detail in the centre of the frame, although the edge sharpness at wide angle could be better. There is also significant barrel distortion at the wider end of the zoom range. Exposure and colour reproduction are both good, but as with many Casio cameras I’ve reviewed previously, noise is a problem at all but the lowest ISO setting. The flash range is also fairly limited, with a maximum of only 2.2 metres at wide angle, falling to a somewhat puny 1.4 metres at the telephoto end, which may limit the camera’s usefulness in social situations.

The Casio Exilim EX-V7 is a very unusual camera with a unique combination of features. Its combination of compact size, fast performance, wide zoom range, excellent video mode and manual exposure options will appeal to some, but its average picture quality and poor flash range are significant disadvantages. The relatively high price may also put some people off. 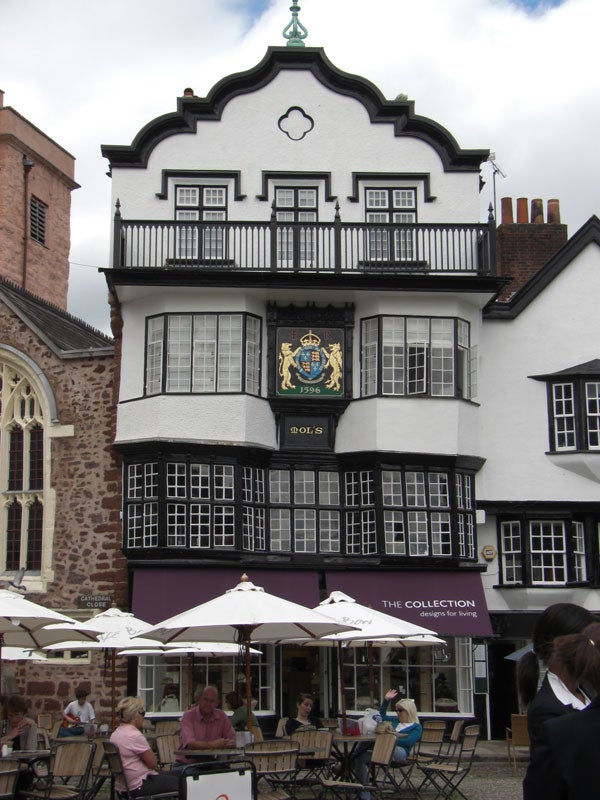 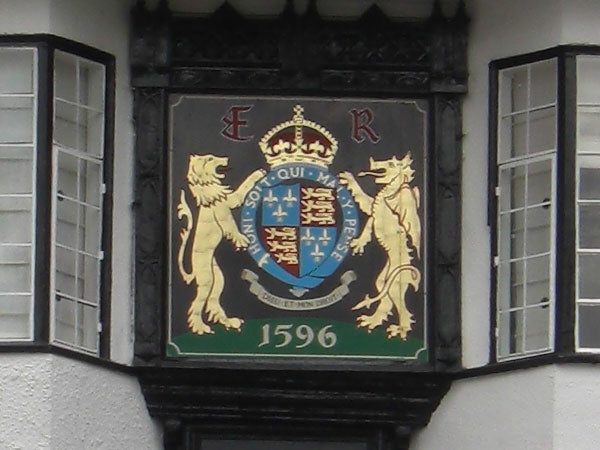 The image is nice and clear at 64 ISO. 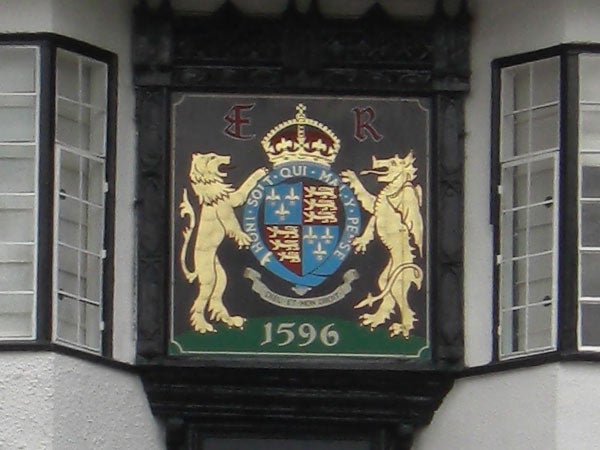 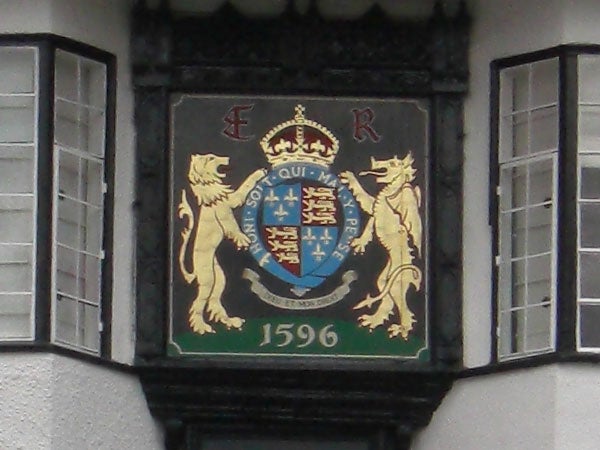 Some noise and colour speckling already at 200 ISO. 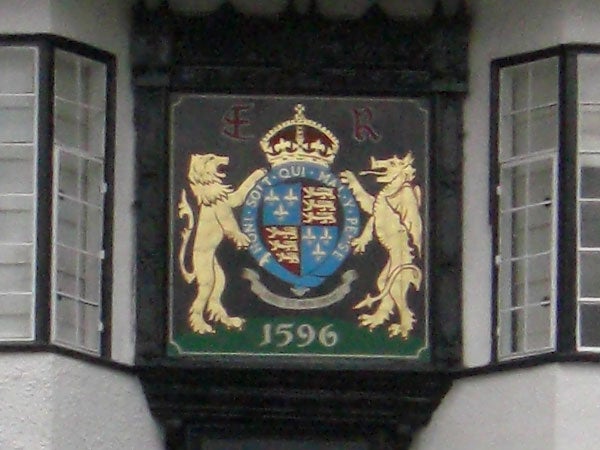 Noise is worse at 400 ISO, with loss of detail to noise reduction. 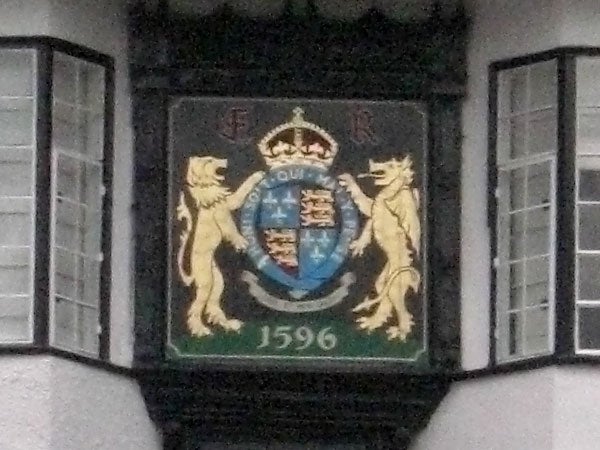 At 800 ISO the image is pretty much unusable. 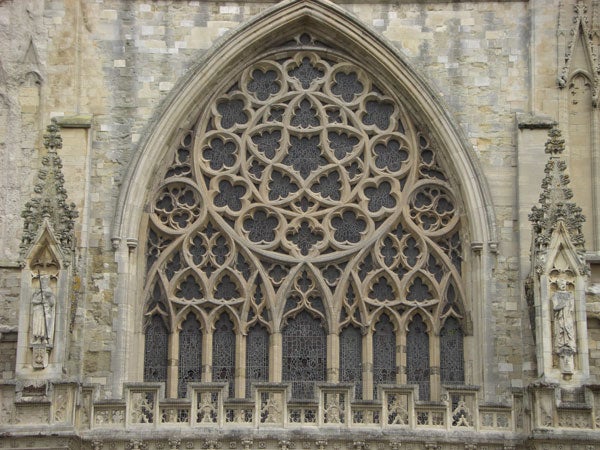 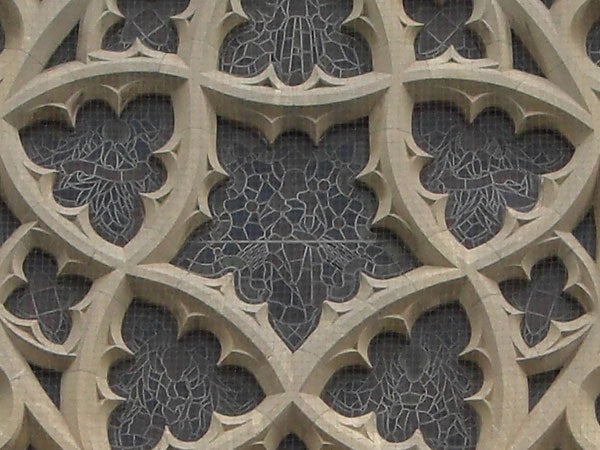 Compare this shot with reviews of other 7MP cameras. The level of detail is very good in the centre of the frame. 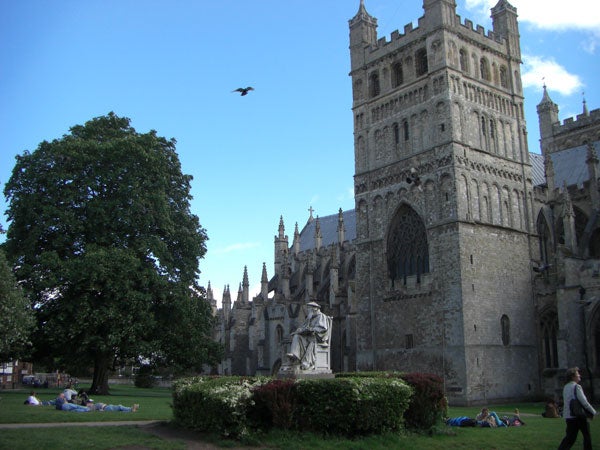 This is shot at the widest angle of the zoom range. 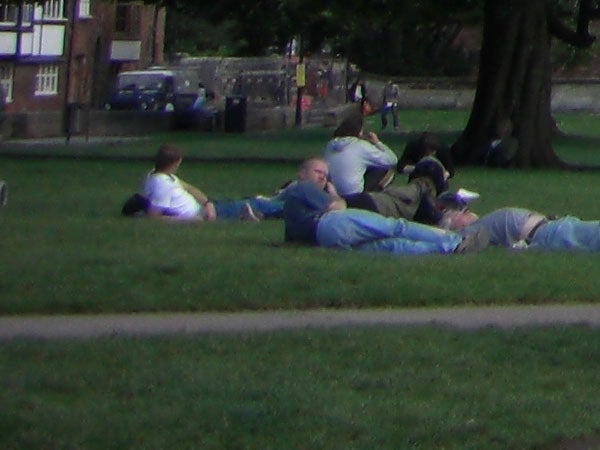 This is a crop from the corner of the above image. Corner sharpness could be better. 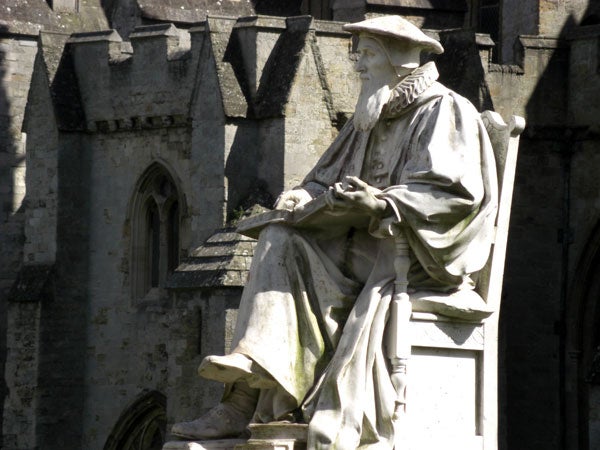 This was shot from the same spot as the picture above, but at maximum telephoto. 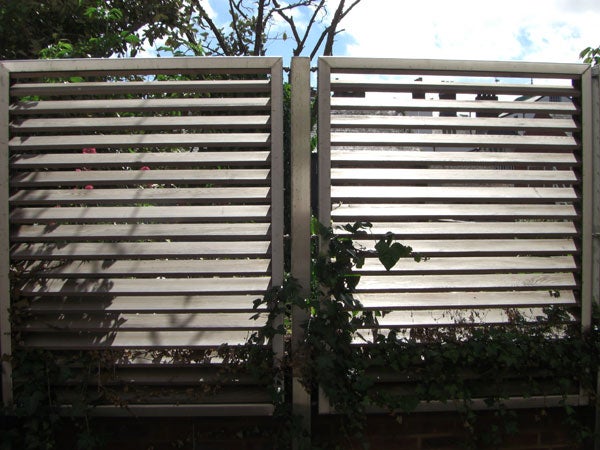 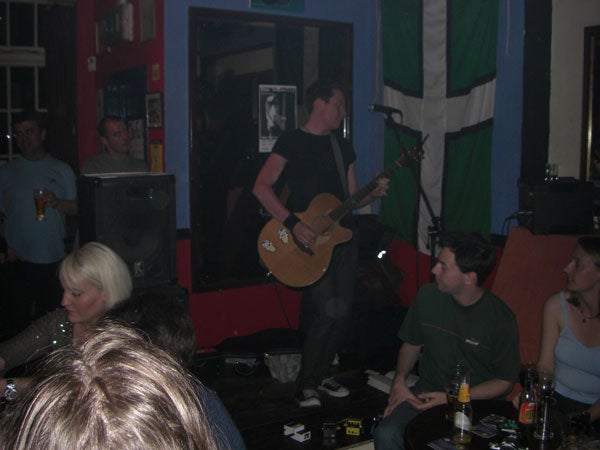 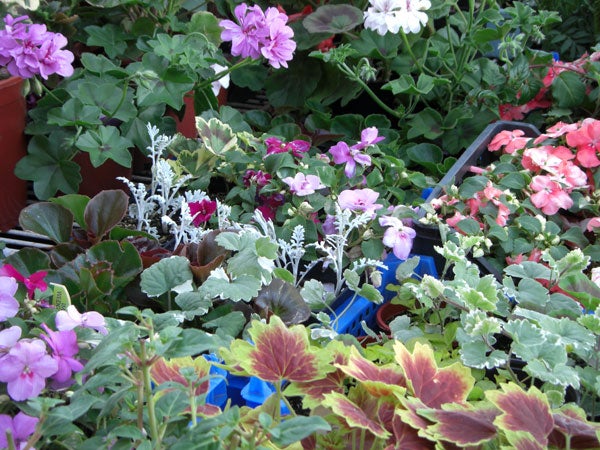 Colour reproduction is good despite the overcast weather.