If you’re thinking of buying a new camera, the chances are that you’re considering one of the big brands you’ve often heard of, such as Canon, Nikon, Pentax, Olympus or Fujifilm. Maybe you’ll consider a Sony, a Panasonic or a Samsung, since you’ve heard they’re pretty good. However the chances are you’ll overlook the longest-established consumer digital camera brands of them all: Casio.


Unfortunately for Casio its name is associated in the public consciousness with cheap pocket calculators and digital watches, and for some reason this seems to have negative connotations, despite the fact that Casio calculators and watches have always been very good. 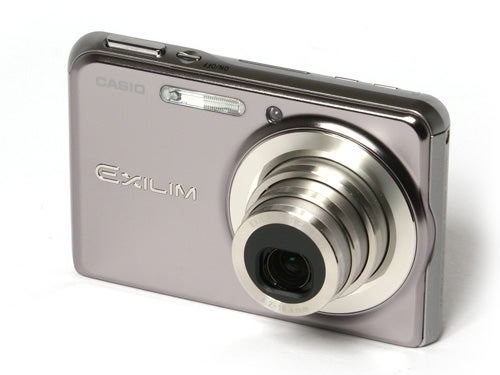 The fact is that it was Casio that produced the world’s first consumer digital camera way back in 1996, was the first to include an LCD monitor, was the first to launch a 10MP compact, and has always been one of the leading innovators in the field. The Exilim series of high-quality pocket compacts are among the smallest, most advanced and best value for money on the market, but hardly anyone ever considers them.


The latest model in the ultra-slim Exilim S-series, the EX-S770, is a good case in point. It is a high-spec 7.2-megapixel ultra-compact with an f/2.7 – f/5.2, 3x optical zoom lens and a 2.8-in wide-format LCD monitor which with 230,400 pixels is one of the sharpest on the market. It has a strong all-metal body available in three different colours, and in terms of build quality and design it is a match for anything from the more popular brands. At just 17.3mm thick it is the slimmest digital camera you can buy, and by a fair margin at that. At 127g it is also one of the lightest. 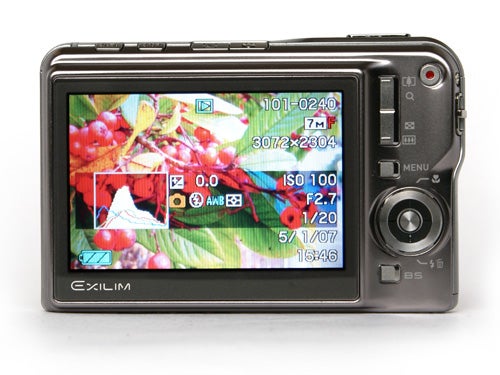 
Apart from its ultra-skinny profile and stylish appearance, the first thing that strikes you about the S770 is its blistering performance. It starts up in just over a second, which is admirably quick, but the stand-out feature is the autofocus. It has the fastest AF system I’ve ever seen in a compact camera, focusing in well under half a second even in very low light. It has a good AF illuminator that enables it to focus in total darkness at a range of at least four metres.

It also has a good continuous shooting performance, with a few unusual features. In normal mode it can shoot at approximately one frame every 1.5 seconds and keep it up until the memory card is full, and in high-speed mode it can fire off a burst of three shots in just over a second, both of which are good but not that unusual. However it also has a high-speed 3fps burst mode with flash, something lacking on most other cameras, and which is very useful for social snapshot photography. Flash range is 3.9m at wide angle, which is slightly above average for a compact camera.


It also has an extremely unusual mode in which it takes two shots at once, one at the normal optical zoom setting, and another with 4x digital zoom applied. I don’t like digital zoom at the best of times, but this is an application of it that I’ve never seen before. 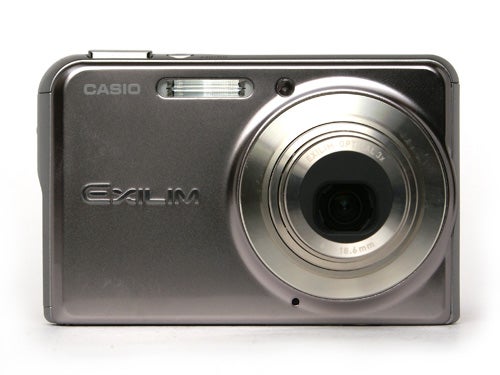 Despite its diminutive size and large monitor the S770 is surprisingly easy to handle. The right-hand side of the body is sensibly shaped with a wide area for your thumb to grip it, and the controls, although very small, are well designed and easy to operate. The up-down rocker control for the zoom is unusual, but very responsive once you get used to it.


The S770 has the same sidebar menu system as the EX-Z1000, with all of the most commonly used shooting settings arranged down the right side of the wide-format screen, leaving a 4:3 area for framing your shot. It is fantastically easy to use, requiring just up or down movements of the D-pad to adjust any of the settings. If that wasn’t easy enough, the left and right D-pad directions can also be used as a shortcut for adjusting metering mode, exposure compensation, white balance, ISO or self-timer mode, depending upon a simple menu selection. 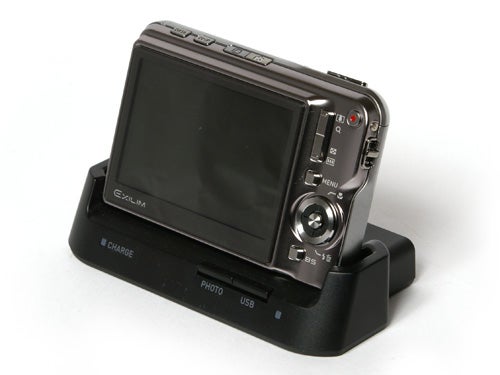 Like all Exilim cameras the S770 has the Best Shot mode of multiple scene program options, another Casio innovation which has since been copied by other manufacturers. There are 35 sample scenes to choose from, including for the first time several movie modes. Since the S770 shoots at 30fps at up to 640 x 480 (HQ) or 704 x 384 (HQ Wide) resolution, these are very good quality.

The S770 is full of clever little features like that, such as the automatic document correction, in which a photo taken of a document from any angle it straightened so that the sides are parallel, or the colour restoration feature, in which you can take a photo of an old print, and then automatically restore faded colours.


It also features something called Casio Document Transport, the software for which has to be installed on your PC from the accompanying CD. It allows you to export documents from any other software as though you were outputting to a printer, but instead copies them to the camera’s memory card via the supplied USB/charger docking cradle. Since it appears to save them as a JPG image I’m not sure that I’d find it that useful, but I suppose it might be handy for presentations or something. 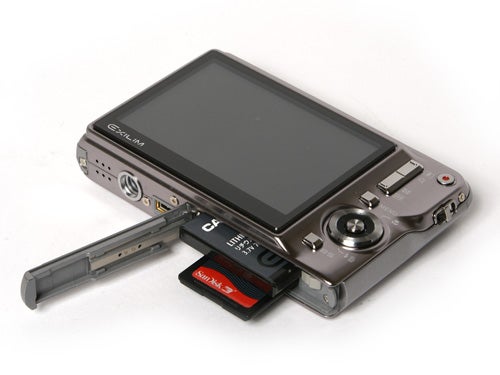 Image quality is also very good. Despite the terminally overcast weather I was able to take some decent test shots, and I was suitably impressed by the level of detail, colour rendition, exposure accuracy and noise control. The lens does suffer from very visible spherical distortion at its widest angle setting, but provides very good overall sharpness right into the corners, with no chromatic aberration visible. There was also a refreshing lack of colour fringing on high-contrast shots.


The S770 has manually selectable ISO settings up to 400, with 800ISO available as an automatic setting in Anti-Shake mode. There was some noise visible at 400, and a fair bit at 800, but results were significantly better than some other 7MP compacts I’ve tested recently. Indoor flash shots were also very good, with excellent frame coverage and colour reproduction, and very fast recharge time. 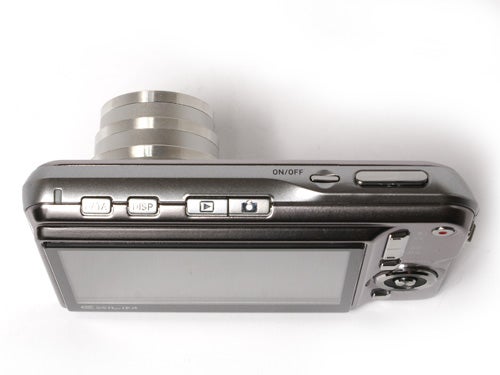 My only real criticism of the S770, apart from the lens distortion, is that the full manual is only included as a PDF document hidden away on the software CD. Please can we stop doing this?


Apart from the wide-angle distortion and the CD manual I have nothing but praise for the S770. In my opinion it is currently the best ultra-compact digital camera on the market. Considering build quality, design, performance, value for money and photographic results it is comfortably ahead of the competition in every respect.

”A range of test shots are shown over the next three pages. Here, the full size image has been reduced for bandwidth purposes, and a crop taken from the original full resolution image has been placed below it in order for you to gain an appreciation of the overall quality.” 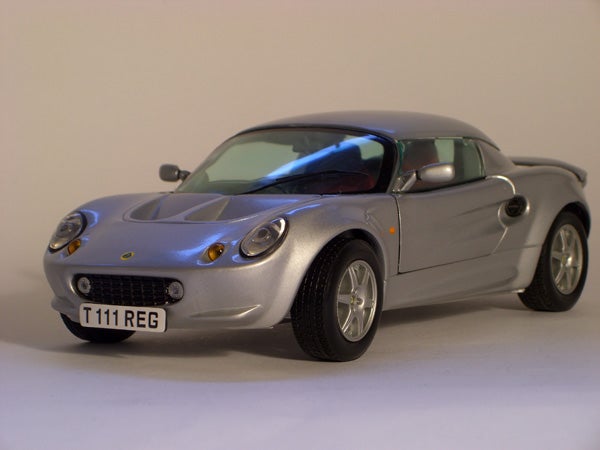 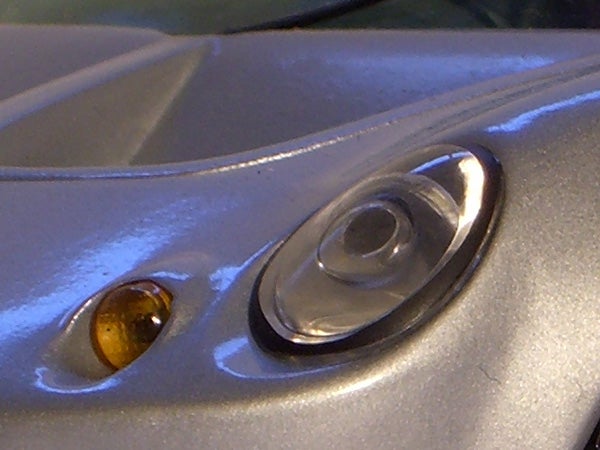 At the lowest ISO setting the S770 produces a nice smooth image with a very high level of detail. 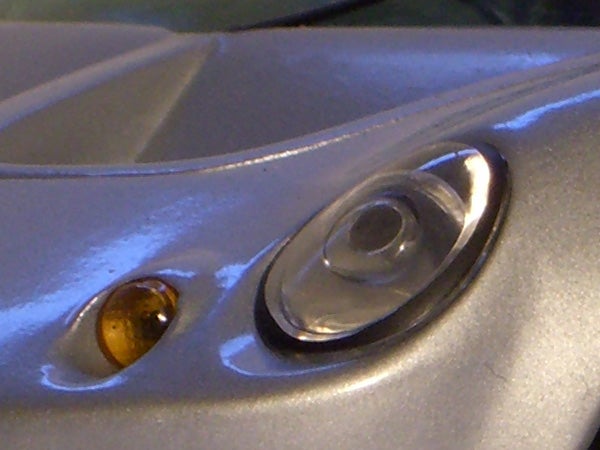 Likewise at 100 ISO the image is clean and sharp. 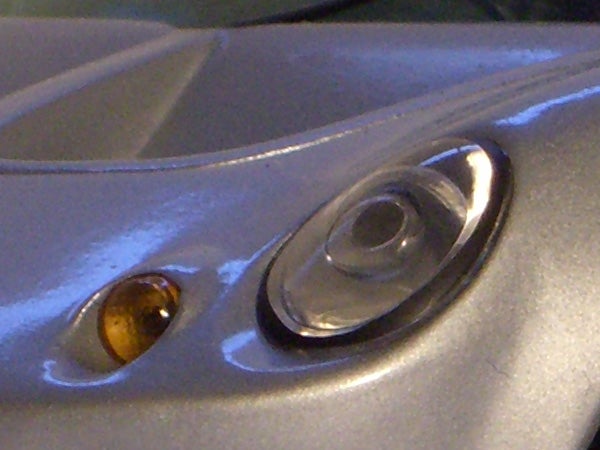 At 200 ISO there is just a hint of colour speckling in the darker areas of the image, but they wouldn’t show up on even a large print. 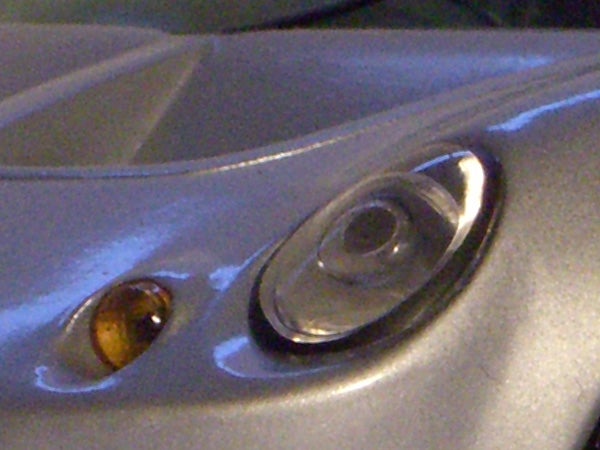 At 400 ISO, the highest manually selectable setting, there is slight image noise visible in the mid tones as well, but it is well controlled and doesn’t detract much from the overall quality. 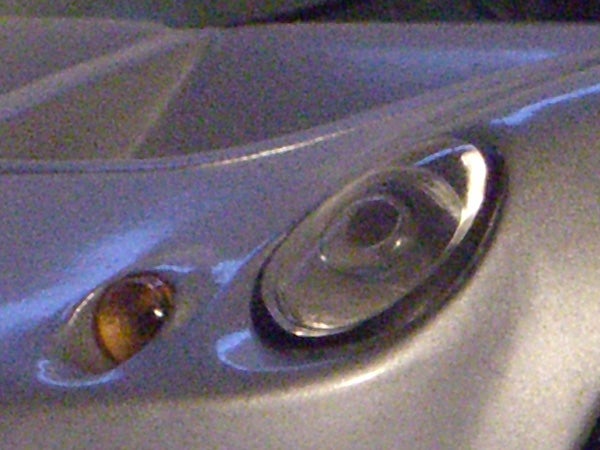 800 ISO is only selected in High Sensitivity or Anti Shake modes, and does result in visible noise across the whole image, but I’ve seen a lot worse. 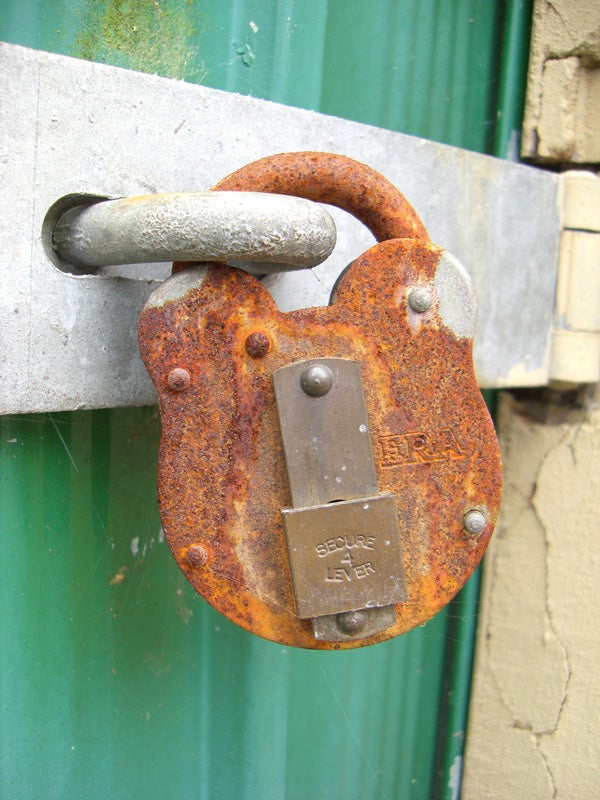 The S770’s 7.2MP sensor captures a very high level of detail, as can be seen in the 100 percent crop of this image, below. 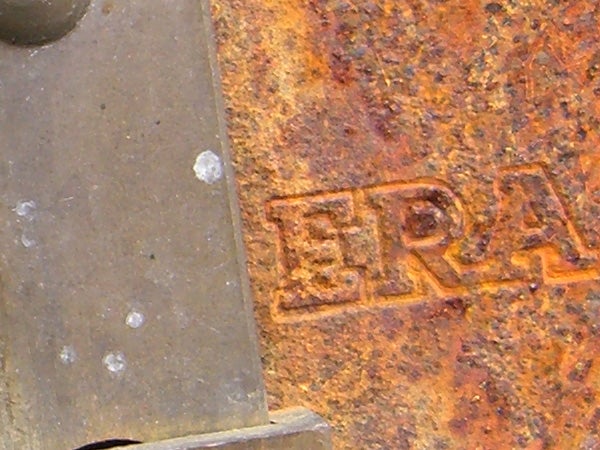 This is a 100 percent crop of the previous image, showing the fine detail the camera can capture. 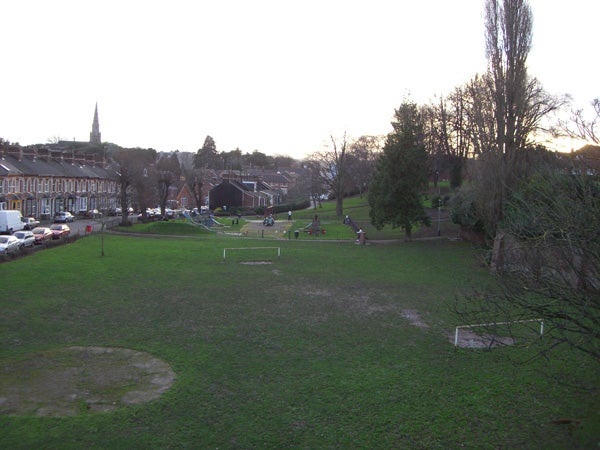 I’m reliably informed that it will be sunny again one day, but in the meantime this wide angle shot is grey and dull, but not because of the camera. The wide angle end of the zoom range is equivalent to 38mm. 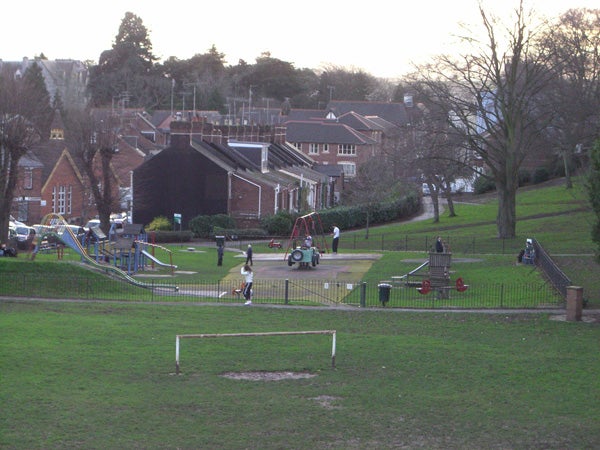 Taken from the same vantage point as the previous shot, this shows the 114mm-equivalent telephoto end of the zoom range. 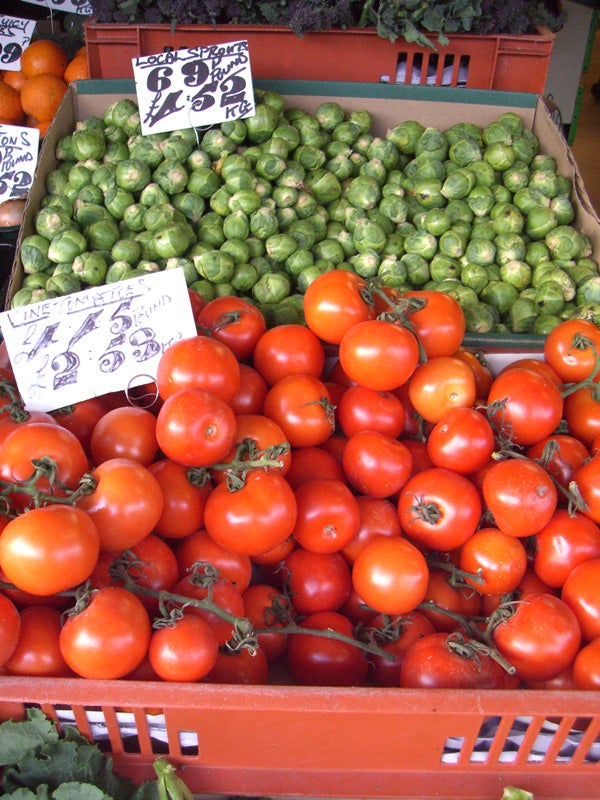 Even though the anti-shake mode set the ISO to 400 for this shot, the colours are still rich and vibrant, and those tomatoes look good enough to eat. You can keep the sprouts though. 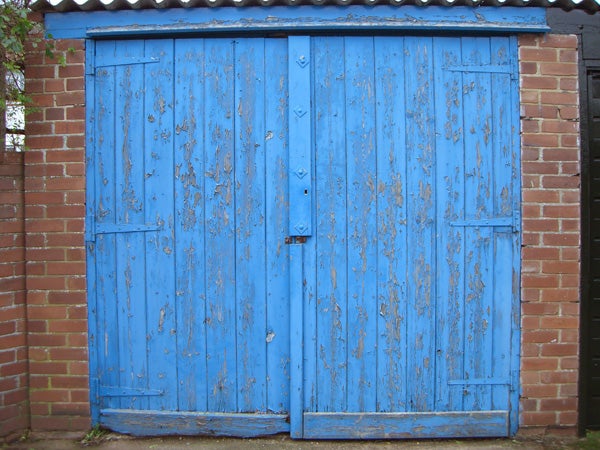 The only real criticism of the S770 is the rather bad spherical distortion at the wide end of the zoom range, a common fault in ultra-compact lenses. 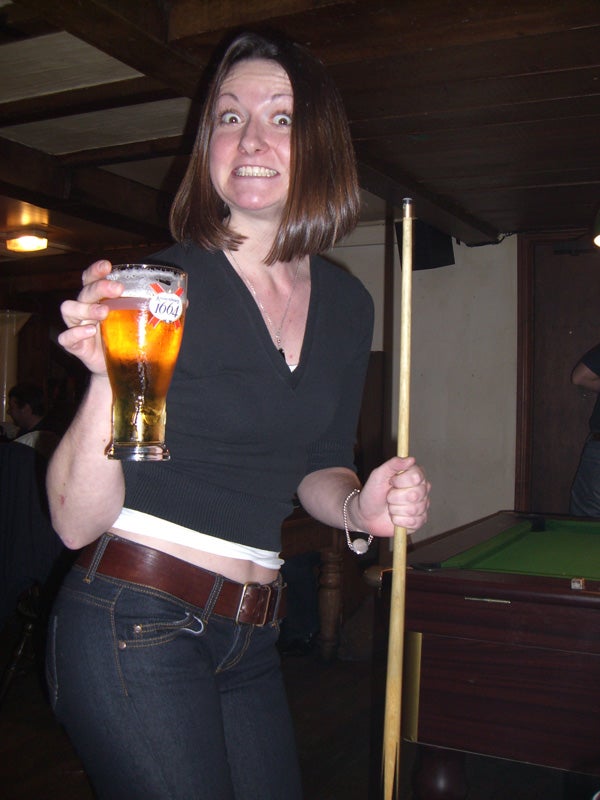 The built-in flash has a range of 3.9m at wide angle, and excellent frame coverage. I won, but only best of three. 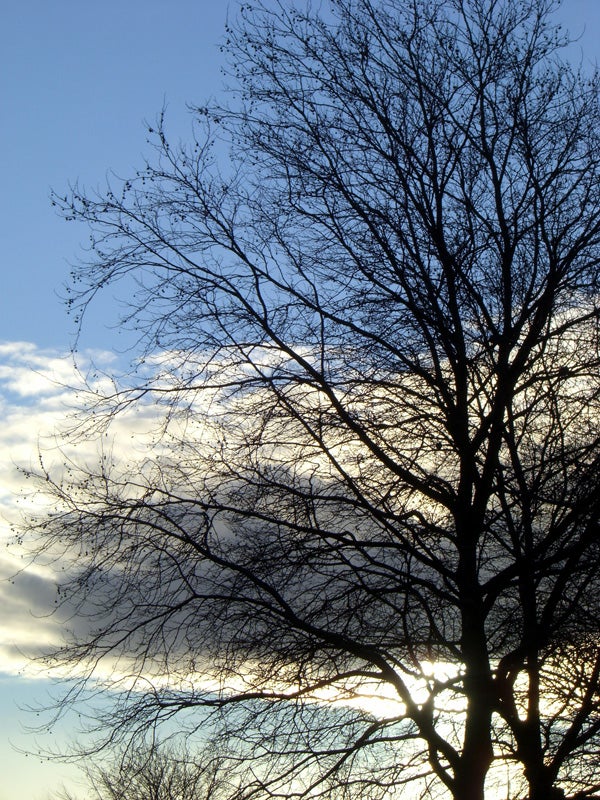 Unlike a lot of powerful compacts, the S770 copes very well with high contrast shots. There’s no trace of purple fringing on this shot. 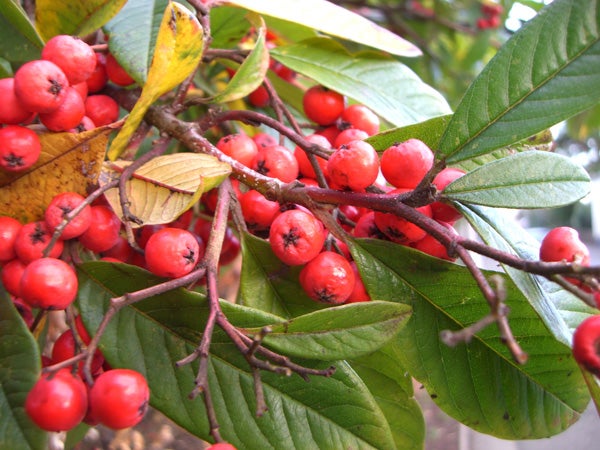 The macro range is only 15cm, which isn’t particularly close. This is unusual for a Casio camera.