Casio has its finger in more pies than Billy Bunter, from keyboards to digital watches and calculators to computers and led the way for other manufacturers to break into photography. Sony may, along with Canon, lay claim to being the inventors of digital photography, but Casio is the granddaddy of digital compacts, being the first company on the starting blocks with the QV-10 way back in 1997. That 1MP model cost £600 then, and the company has continued to refine and innovate ever since. Unusually and interestingly, Casio is the only major camera / electronic manufacturer not to have thus far released a DSLR, with the likes of Samsung, Sony and Panasonic all vying for credibility in that market. 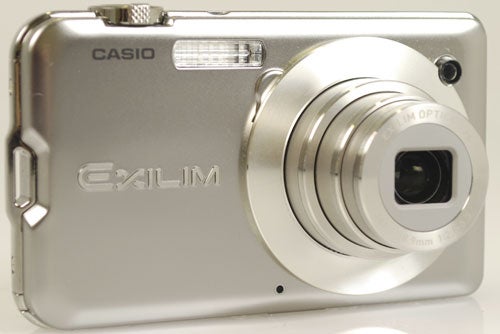 The S series of cameras are also known as card cams, thanks to their small dimensions, being little bigger than a credit card and the S10 continues this tradition, with Casio boasting it the thinnest 10MP compact on the market at it’s launch in January 2008.


Despite that the camera still boasts a 3x lens and more features than most of the competition fit into their entire range. This is, of course, no surprise from a company that also have made watches with built-in email address books! 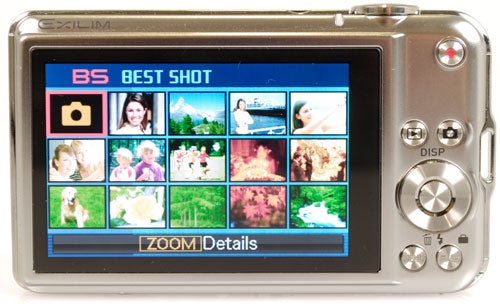 First though, lets consider the sensor. This is a small ½.3in LCD with 10 million pixels. This leads to a small pixel pitch, that is, each pixel – or photo site – is very small indeed. As a seasoned reviewer of such things, I would expect the final results to lead to more noise and artefacts than on some other models. This small sensor and it’s resulting image circle also allows the lens to be made smaller, and as such the resulting 3x zoom easily folds flat into the low profile body. The zoom range is the 35mm equivalent of 36-108mm, comparing favourably to other 3x zoom cameras. Casio hasn’t scrimped on he body and the lovely aluminium casing with matt finish is sure to appeal to the more aesthetically appreciative.

The build quality of the camera is matched only by the innards. The camera features its popular and long lasting Best Shot series of scene modes. Where most cameras concentrate on a handful of commonly photographed subjects and scenarios, the Casio S10 covers a multitude. On the S10 for example, are Portrait, Landscape(or scenery in Casio parlance) and Sport; all of which we have come to expect. But the camera also includes such rarities as Autumn Leaves, Food, Collection and Auction (for photographing toys or ebay items), Business Cards and Documents. There’s even a White Board mode so you can shoot seminars and presentations.

While this may seem overkill, the premise is obvious – there’s a wide range of photographic applications that aren’t always easy to shoot, so let the camera do the guesswork. I’ve been in many a situation watching people taking pictures of a white sign with the flash on and that is obvious to me won’t come out. With a ‘White Board’ mode, the chances of success are increased. While some of the scene modes are a little esoteric, I actually admire a camera with too much than too little. It’s better to never use a feature than have a camera lacking a feature you require. 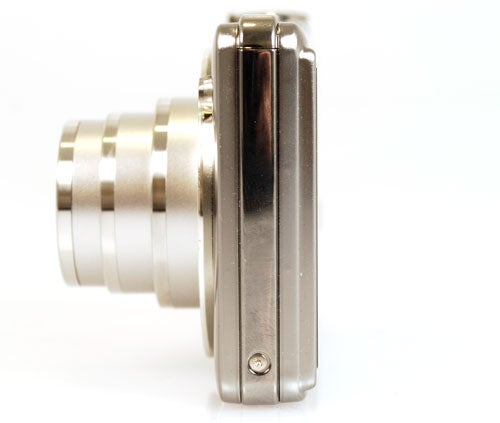 Equally useful to a select audience are the cameras video modes. As well as standard video recording, up to 10 minutes, there’s the ability to record for both YouTube and iTunes formats, thus saving time in post processing or video conversion and a wide screen option. You can record with both sound and in silent mode, which also records in black and white for fans of Charlie Chaplin. To further facilitate video recording, a separate video button is featured on the back of the camera in the to right hand corner, so you don’t even need to enter the menu to switch.


The camera layout is attractive and easy to operate, though the buttons are rather small. The top plate houses a small recessed power button along with the shutter release button. Around the outside of this is the zoom ring.

The back of the camera is dominated by a bright 2.7inch LCD, with a set of buttons allowing camera changes. These include the aforementioned video button, the menu button, and controls for BestShot modes, playback and shooting modes. A larger D-pad with central ‘set’ button allows scrolling of images and menus, with the south point also giving access to the flash modes and delete image option. Note the lack of an optical viewfinder. 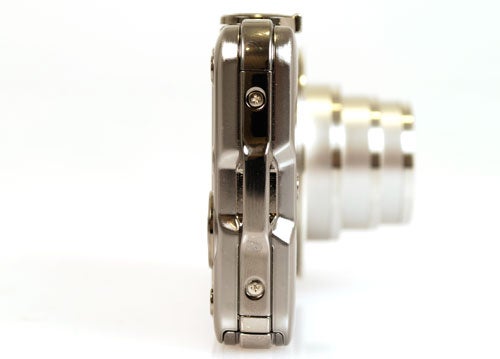 The built in flash operates between 0.2m and 2.8m, which is at the lowest end of the flash strength spectrum, and includes a soft flash mode to lessen the harsh contrast of regular flash, as well as a red eye reduction mode.

Exposure is automatic, with a shutter speed variation of 4-1/2000sec between standard shooting and night exposure, while a variety of metering options include multi pattern, centre weighted and spot options. There’s also exposure compensation over ±2EV and white balance settings include auto, daylight, shade, overcast, tungsten and 2 fluorescent settings. You can also set WB manually.

Exposure sensitivity is a useful ISO 50-1600, with auto ISO available as well as anti shake should the camera shutter speed be slower than ideal. There’s also an expanded dynamic range settings should the contrast of a scene be too much for the camera to handle, or if the subject is backlit for example.

One problem with small cameras, especially small, metal ones, is just hanging on to them. The slippery surface combined with the slim profile doesn’t suit everyone’s hands and the limited grip area of the back of the camera leaves little purchase. The S10 is typical of this, and I found a couple of instances where I nearly dropped the camera. Similarly the large surface area of the LCD leads to a build up of fingerprints, which while not a core criticism is slightly annoying.

In other ways the camera’s easy to use, with most features found quickly in via the Best Shot button or in the menu. The menu itself is bright and easy to read, with everything clearly labelled.

The shutter is responsive and following the speedy auto focus, which includes face recognition and even smile detection, the camera quickly takes the picture.

It’s not the most comprehensive camera in terms of control, but for the everyday snapper, there’s such a wealth of choice of subject based modes that it’s very rare that you’ll ever mess up a picture and to the man in the street that got to be a good thing.


With such a wide ISO range, the camera suffers from about ISO 800, when noise starts to get really noticeable. At ISO 1600 it really is problematic with blotchy green and blue speckles invading the images.

Exposures are pretty reasonable on the whole, though the camera struggled with pure white subjects, and exposure compensation should be used for best results. Impressively the wide dynamic range function works well, with some tricky shots coming up trumps.

Colour too is generally good and accurate across a broad range of lighting conditions.

Where the camera falls down is sharpness, with camera shake appearing often even at relatively fast shutter speeds, and a lack of critical sharpness at the edges of the frame. Similarly the edges display some fringing.

Unsurprisingly the lens shows severe barrel distortion at the wide end of the focal range, which is common in most digital compacts, while the tele end fares better with only slight pincushion distortion. 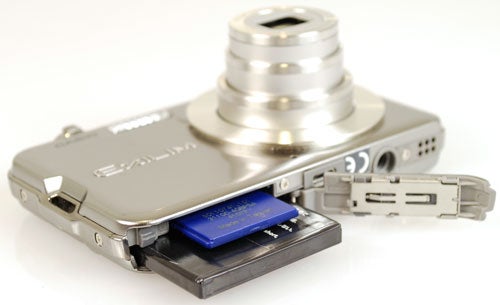 As a small snapshooter the Casio may not suit everyone, even though it offers something for everyone. The handling is down to taste and personal physiology, so we can’t expect the perfect camera, but the small form is quite fiddly.

In terms of images the camera is also hit and miss, with reasonable but not great results. A stand out feature is the dynamic range but other than that the camera produces too many blurred, noisy and distorted images. Most snappers won’t notice, but there are so many cameras available that are better that it would be a shame to miss out just through ignorance. 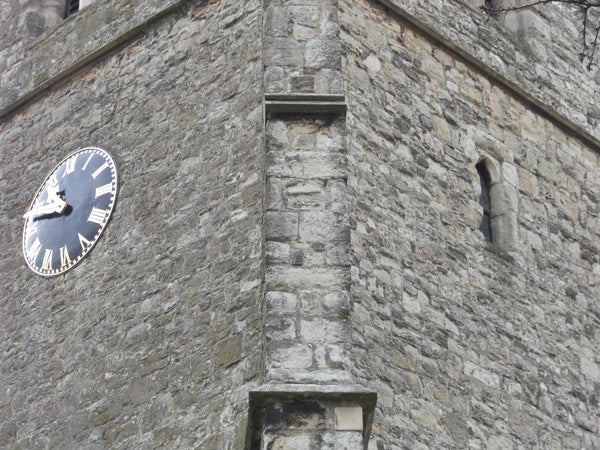 This is a the full frame at the minimum ISO setting. 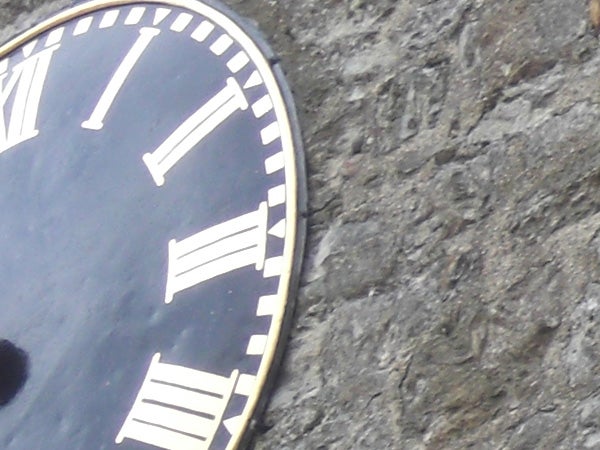 At ISO 50 the camera controls noise well, though the slow speed makes sharp images difficult to obtain in normal daylight. 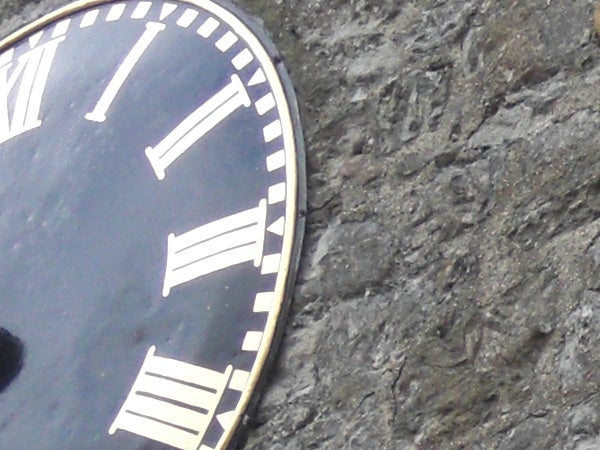 Noise is still under control but some Jpeg artefacts are beginning to appear and fringing is evident around the clock face. 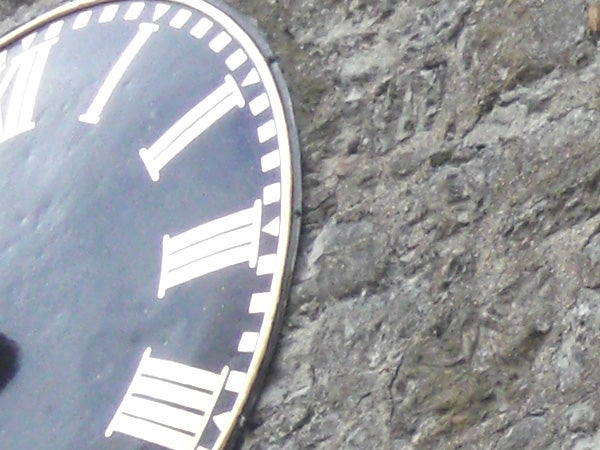 Noise is beginning to appear in the shadows and the fringing continues. 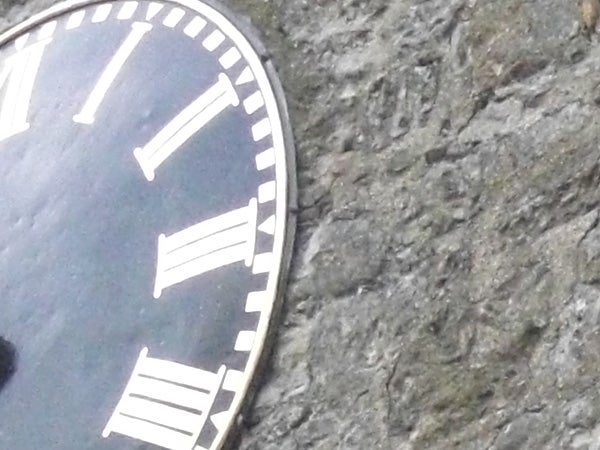 Noise is apparent but not too intrusive, though I wouldn’t like to use it at ISO 400 for important. 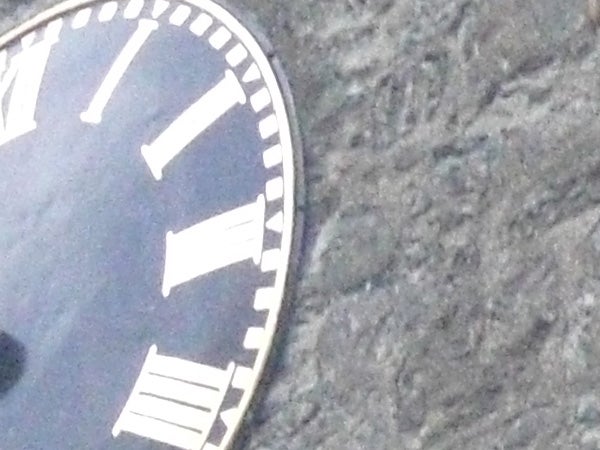 The image is still usable and at print size doesn’t appear to bad. At 100% the noise is very intrusive. 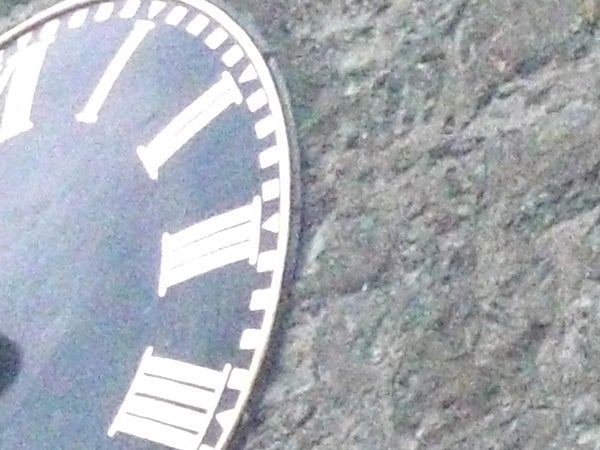 Casio is pushing the boundaries of acceptability at ISO 1600, but at least you could still take pictures in low light. 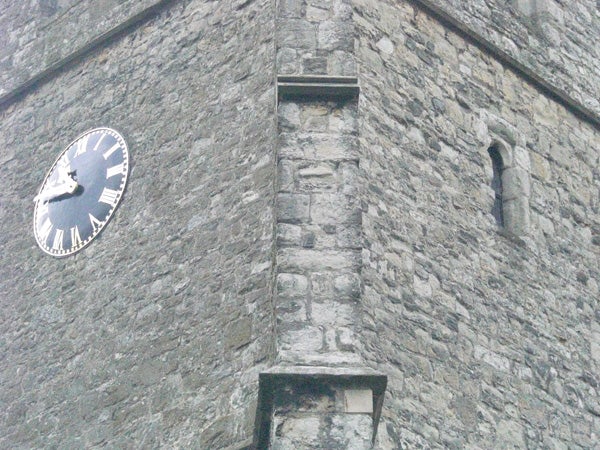 This is the full frame at the highest ISO setting. 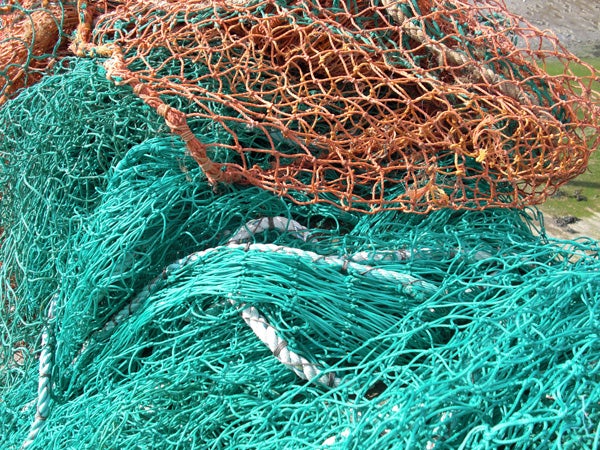 The image is sharp and there’s plenty of detail but the brightness of the rope in the centre has blown. See below for a full-res crop. 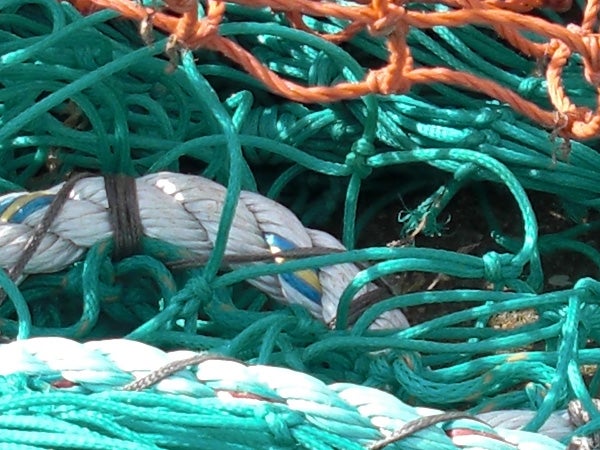 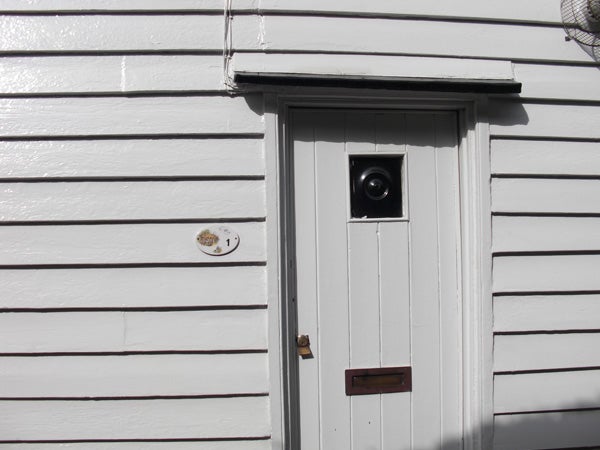 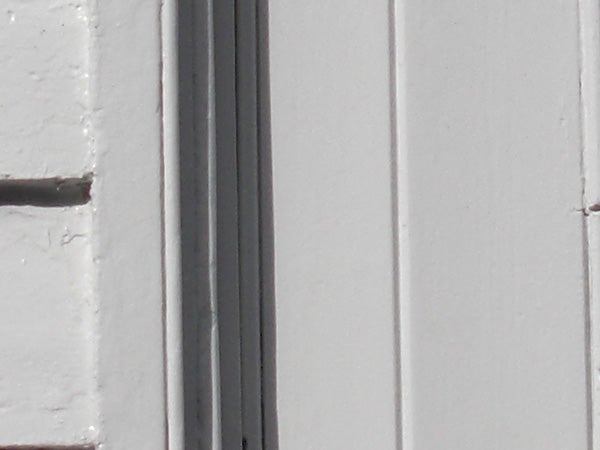 This is a crop from the picture above. Sharpness is pretty good at the centre of the frame. 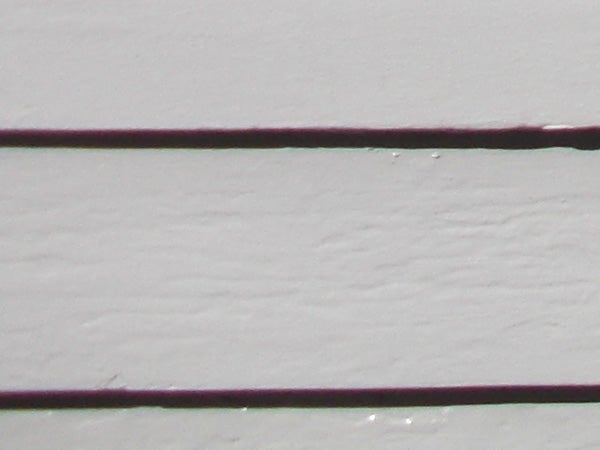 Corner sharpness is also pretty good, although there is a trace of chromatic aberration. 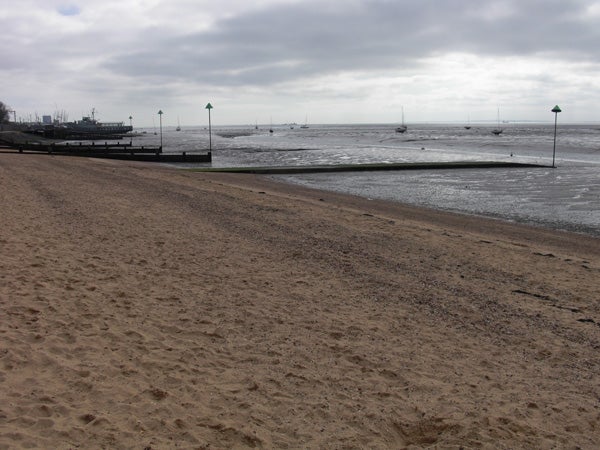 A scene taken at the widest setting of the lens at 38mm. 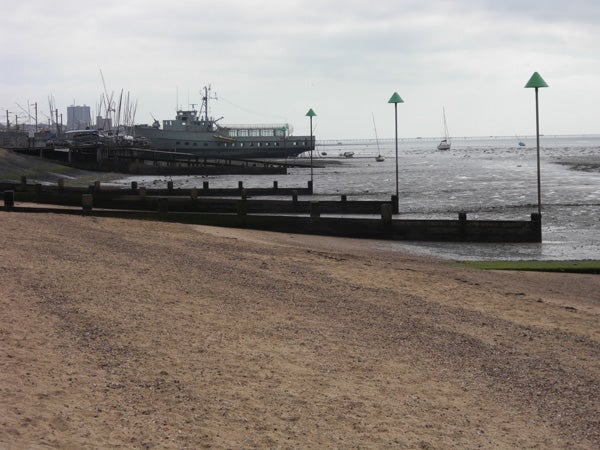 The same scene taken at the telephoto end of the lens at 108mm. 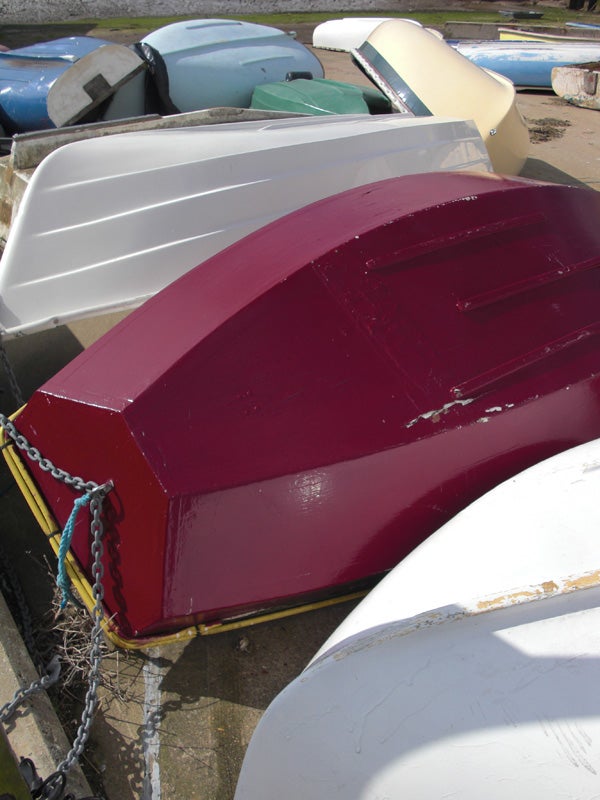 Colours are good but there’s some fringing along the edge particularly towards the top edge of the frame. 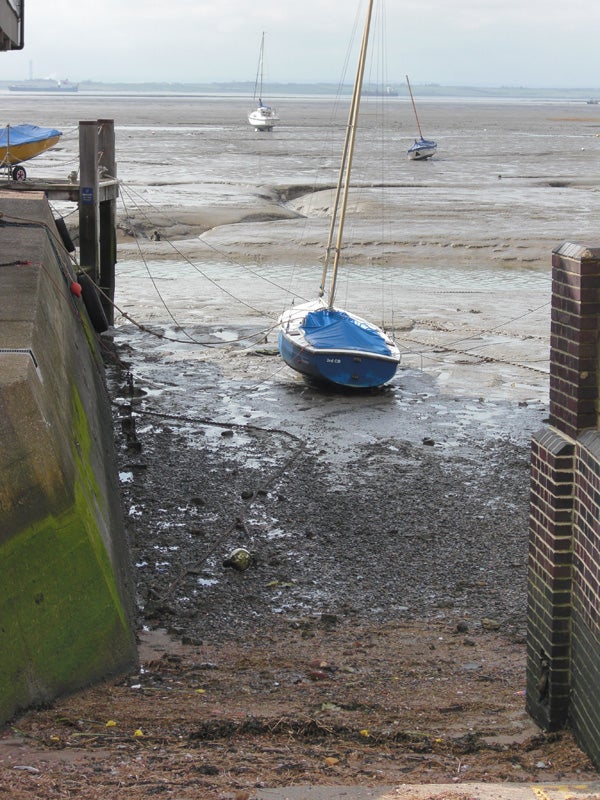 The Dynamic Range feature, on setting +2 shows a great level of detail across the image, where normally the detail of the sky or foreground would be lost. 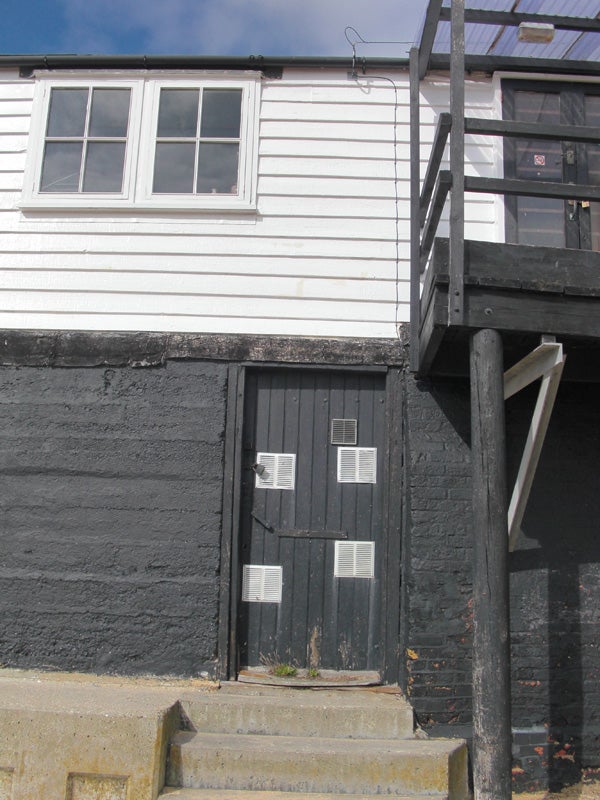 This average scene shows excellent exposure at the default setting, though barrel distortion can be seen.