While games critics like to scoff, the Carnival Games series has been immensely popular on the Wii, so perhaps it’s no surprise to see Sony bring something similar to Move. Like the Wii series, it’s another mini-games compendium, but with the mini-games based on classic sideshow games – the kind that involve tossing rings over pins, shooting hoops with a basketball or rolling heavy little balls into chutes. Here we get umpteen variations on the above, plus target-shooting games, throwing games and those odd games where you smack something with a hammer to make a frog jump onto a lily pad. 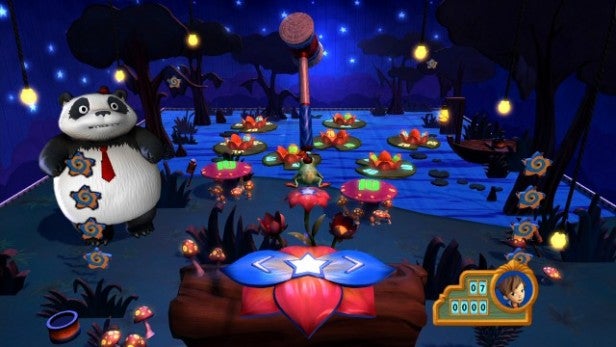 However, Carnival Island isn’t as dull and uninspired as you might think. For one thing, it has a slightly weird structure. While you can go into Party mode, pick a few mini-games to play with friends or ask for a random selection, the game also has a single-player story mode. Here it’s all about trying each section of the mysterious island of the title, exploring the mini-games found in each.

Each mini-game has a series of challenges, and completing these challenges will awaken friendly furry critters and unlock a new version of the mini-game in question. Unlock all the available versions and you bring that stall and that section back to life, and slowly restore the magic (now flying) island to its original working state.

It’s weird and oddly charming. It’s not every mini-game compilation where you can say that your skills woke up Captain Spaghetti the jellyfish, or that takes the trouble to tell you that he’d like to be known as Admiral Splashypants instead!

The plot, such as it is, is advanced in Studio Ghibli-esque cartoons, and the whole game is packed with collectibles to keep a family audience interested. Win tokens in the games, and they can be spent on mystery balloons and accessories for your on-screen character. And while simply unlocking the mini-games isn’t much of a long-term struggle, completing all the challenges certainly is.

Best of all, whether you’re tossing rings, rolling balls or shooting a rifle at moving targets, the Move controls work brilliantly. Each action feels natural, and it’s impressive how sensitive the technology can be. 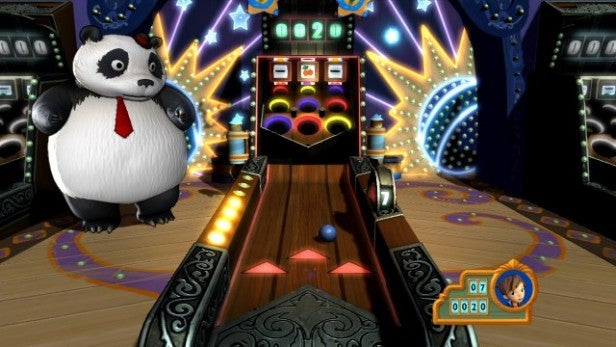 It’s easy to dismiss Carnival Island. It would have been better if you could actually explore the island in the style of Kinect’s Disneyland Adventures, and even better than that if there were elements of adventure on top of the mini-games action. Nor would a larger selection of mini-games have gone amiss.

Despite all that, it’s still a lot of fun, curiously addictive, and one of those games that – in our experience – goes down well with the family and particularly with younger kids. It’s not what you might call a classic or a Move killer app, but it’s cheap and very cheerful, so if you have a family, a PS3 and Move, we’d warmly recommend giving it a go.

We’re not saying this is the best game ever made, but if you want a family-friendly compilation of Move mini-games you could do much, much worse. Carnival Island is let down slightly by a lack of mini-games, with most being variations on a few themes. But as a game to drag out on a wet Sunday afternoon, it’s actually got a lot going for it.