What is the Carl Zeiss VR One?

With the launch of the top-of-the-range VR headsets imminent  – I’m talking here about the HTC Vive, Oculus Rift and PlayStation VR – it’s no surprise that there are additional VR models emerging to fill out the lower end of the market.

Of course, this all started with the Google Cardboard, which is the most affordable option since it’s literally made out of cardboard.

However, if you’re willing to fork out around £100 then there are more professional-looking – although less biodegradable – options available, such as the Samsung Gear VR or the Carl Zeiss VR One featured here.

Carl Zeiss is well known for manufacturing the best optics for camera lenses, so I was excited to see how the company had applied its specialist knowledge to its first VR headset.

Sadly, my excitement was short-lived. Like such mobile VR headsets as the Homido VR and Noon VR, the Carl Zeiss VR One misses the mark on a number of crucial elements. 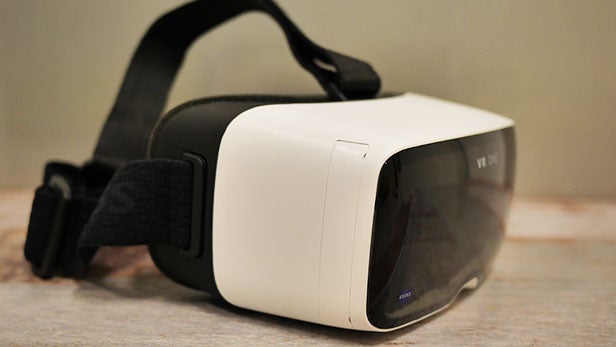 Upon lifting the VR One out of the box, I was struck by its excellent build quality. This is a solid headset – there isn’t a flimsy piece of construction in sight – with a strong monochrome design.

The front panel is made from a translucent black plastic. The Carl Zeiss logo sits discretely in the bottom left-hand corner, and the VR One name can be found along the top. The main body of the headset is made from a solid matte-white plastic, with a long narrow slot sitting behind the plastic plate.

There’s also a black trim within which you’ll find some ventilation holes, covered from below with a thin layer of foam mesh. These ensure that the lenses stay mist and fog-free, unlike other VR headsets at this price range.

There’s a triple layer of foam around the headset, too, to protect your eyes, and a double headstrap for keeping the VR One firmly on your head while in use. I found the VR One comfortable to wear; the straps can be adjusted to ensure the headset fits even the largest of heads. 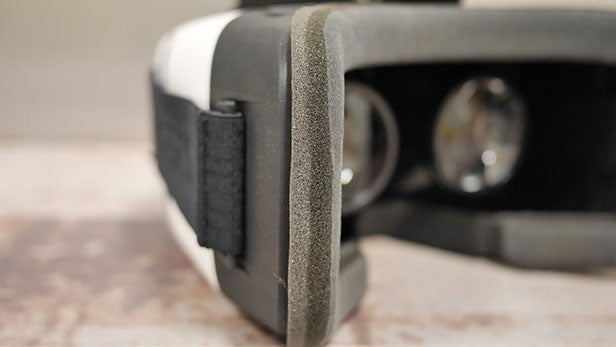 The generous nose cavity also ensures that snouts of all sizes can be accommodated. However, it does mean that you can see through to the world around you when looking downwards. This proved a little disorientating, and can give you quite a headache.

And this isn’t the only issue with the VR One’s design. Carl Zeiss has decided to go for a one-size-fits-all approach when it comes to the lenses. The company is fairly confident that the positioning of its “Zeiss Precision” lenses will result in a satisfactory experience for around 90% of users.

That means there’s no way to adjust either the distance between the lenses and your eyes or the interpupillary distance. For most users, this is important.

For me, and every other person that I’ve had test the VR One, the image has been blurred and always slightly out of focus – even while wearing contacts or glasses, which are well accommodated by the VR One. 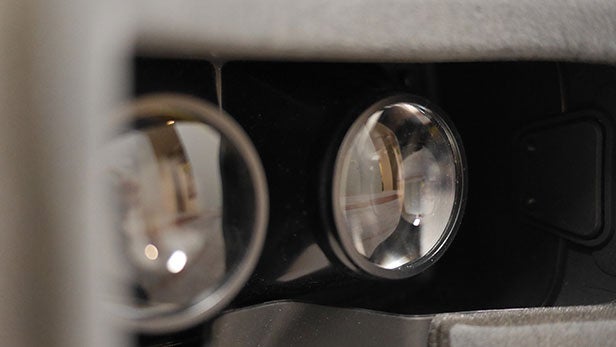 After 15 minutes of so of use, the majority of my testers had to stop using the VR One due to the onset of headaches or severely tired eyes. I was the same, as I had to constantly squint to ensure a clear picture and to ready any text.

It’s a major concern, and one that surely must have come up during the testing process at Carl Zeiss.

Also note that the VR One costs £124.99 at RRP but doesn’t include a smartphone tray, which you’ll need to use the headset.

However, both the Samsung Galaxy S4 and Galaxy S6 will fit in the Galaxy S5 tray.

You will find that some retailers are now stocking the Carl Zeiss VR One for £119.99 with a tray.

The trays themselves are well made and slot perfectly into the VR One. They feature holes that let you access the audio and charging ports of your phone while it’s docked in the headset. Plus, the phone is held securely inside, with no fiddly positioning necessary. Note that if your smartphone has a case, then you’ll need to remove it in order to fit the phone into the tray. 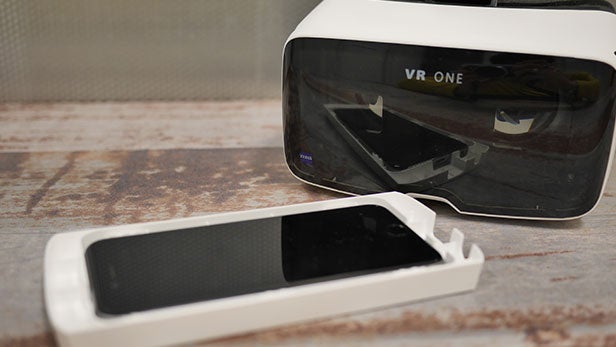 As for the VR content available, variety remains an issue. Despite Google Cardboard having been around for nearly two years now, there still isn’t a plentiful supply of content available – especially next to the Oculus-powered Samsung Gear VR.

Carl Zeiss itself has a small selection of apps made specifically for the VR One: VR One Media, VR One AR, Carl Zeiss VR/Exposition and the VR One Cinema.

The VR One Media app acts as a hub for all the VR content that can be found within either Google Play or the App Store that Carl Zeiss deems is compatible with the VR One.

Everything on offer is fairly basic and low-res; I gave up on them all following only a few play-throughs. Some – such as the VR Swing – were abandoned after only a few seconds.

There are far better apps and games to be found by simply searching through the Android and iOS app stores. 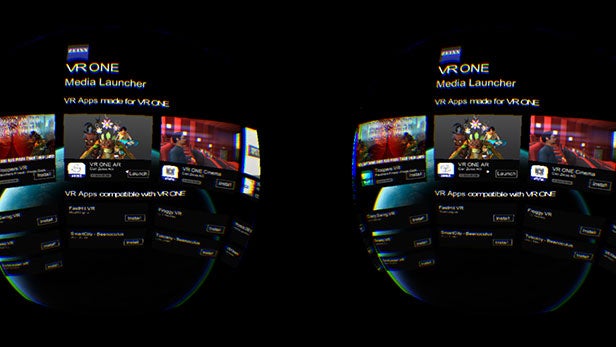 The VR One AR app takes advantage of the small, colourful paper cube that comes flatpacked with the VR One. It uses the camera on your phone to let you see out of the headset to the cube itself, and allows a variety of items and creatures to emerge from within.

It’s a great experience and a superb introduction to VR that doesn’t require you to be totally cut off from reality.

The Carl Zeiss VR/Exposition app on the other hand is a lot more sedate. It takes you on a tour of an art gallery that features two artists, allowing you to get up close to the artwork from the comfort of your sofa.

Finally, the VR One Cinema allows you to downscale video and other content to a VR experience, but the nearly SD-level quality makes for a very disappointing experience. I’d rather just watch them on my phone. 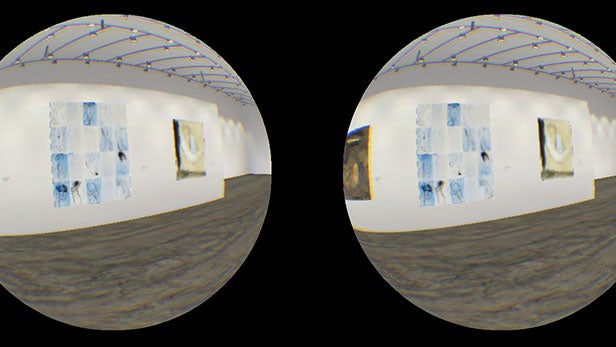 To get you started, I’d advise downloading the Google Cardboard app, which is available for both Android and iOS. It gives you a better first impression of what mobile VR can be like.

However, you’ll find that some of the interactivity is limited with the VR One, since unlike the Cardboard, it lacks any buttons. That means you won’t be able to essentially tap the touchscreen remotely.

On the suggestion of one of the TrustedReviews commenters, I connected a cheap Bluetooth mouse to my phone, with the mouse-click acting as a touchscreen press. It’s a bit of a rudimentary solution, but it works – as will any Bluetooth controller. However, it still amounts to an added cost on top of buying the VR One and the smartphone tray that sits within it. 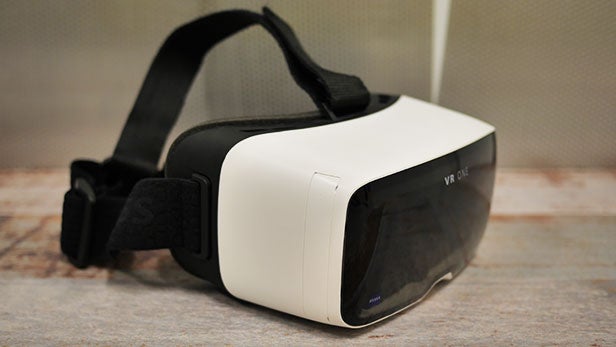 Should I buy the Carl Zeiss VR One?

Despite Carl Zeiss’ expertise in making optics, a great lens alone does not make for a good VR experience.

The inability to adjust said lenses is a major downfall, and the fact that you have to buy the trays separately just feels like a bit of a rip-off to me. Especially since there must be a way to make a single tray that’s suitable for all makes and model of phone.

The VR One is simply a glorified Google Cardboard with less functionality, so you’d be better off buying one of the £20 versions of Cardboard if you want to get started in VR.

There is also the Carl Zeiss VR One GX that is coming soon, which offers a magnet control for clicking within an app. It’s currently available to buy in North America for $120 without a tray.