Exclusive to Nintendo Wii U
It’s a mystery why Captain Toad: Treasure Tracker isn’t properly released until the New Year, because Nintendo’s latest has all the makings of a classic Christmas cracker. A spin-off from the Captain Toad sections in last year’s Super Mario 3D World, it pits the Mushroom Kingdom’s answer to Nathan Drake and Lara Croft against a series of puzzle levels on the search for stars, coins, gemstones and his sweetheart, Toadette.

If you played Super Mario 3D World (you do have a Wii U, don’t you?) then you already know how the heroic Toad does his stuff from the bonus sections there. You have a series of fairly compact 3D levels which you view from a sort of isometric perspective. The levels feature paths, platforms and walkways, structures to ascend and tubes to speed through, plus three hidden gems and, as the journey’s end, a star. Get the Captain to the star and he completes the level, and if he grabs some gems along the way, all the better. 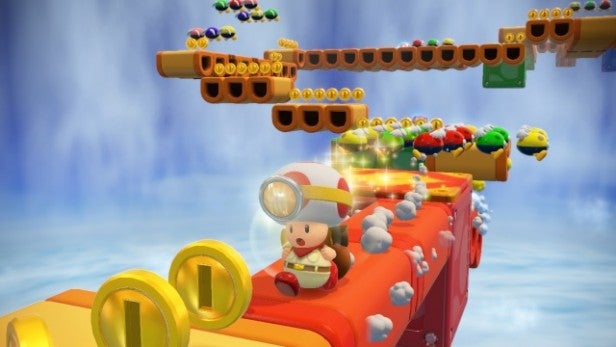 Of course, it’s not that easy. The levels are infested with patrolling baddies, including shy guys, thwomps, piranha creepers, boos and a range of other favourite Mario fiends. Nor are the paths straightforward, often requiring a mix of switches, cranks and hidden pathways to reveal or open the way forward. Hazards abound, ranging from lava and purple poison goo to our old friend, Bullet Bill. Most significantly, while the good Captain moves like Mario, there’s one crucial difference: he can’t jump. In fact, in terms of acrobatic moves and offensive capabilities, our hero is sorely lacking. He can pull up plants, walk on switches, drop on unsuspecting foes and lob the occasional turnip, but that’s about it.

Each level, then, is effectively a puzzle: how do you get the intrepid Mushroom man from start to star without getting whacked by an enemy, singed by lava, crushed by a thwomp or something worse? Up to a point it’s a case of observing patrol routes and working your way around them, or finding ways to get rid of your foes, like a well-thrown turnip or a sudden drop attack. It’s also a matter of learning the level, working out that switch A will reveal a new pathway, or that rotating crank B will make crucial staircases rotate or twist a walkway in a different direction. 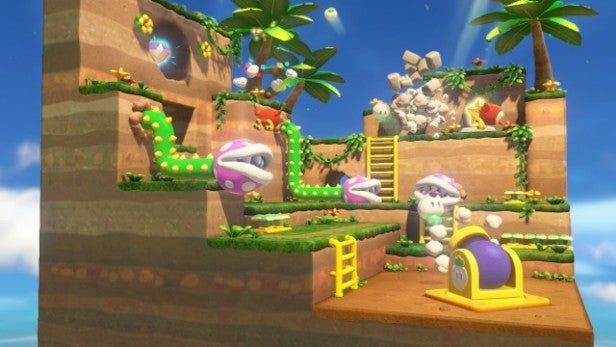 Changing the view, either with the right stick or by physically turning the Wii U Pad, is also vital. Not only does it keep Captain Toad and nearby hostiles in view, but also reveals areas, routes and switches you’d otherwise have no idea about.

It’s a fairly simple affair, but charming and scarily more-ish. Each bite-sized level can be cracked in ten to fifteen minutes – often less – and it’s rare to find yourself stumped for long. Later levels are more demanding of your timing and your ability to operate switches with speed and precision, but there’s nothing here to match parts of Super Mario 3D World for challenge, let alone the fiendishly difficult New Super Mario Wii U. 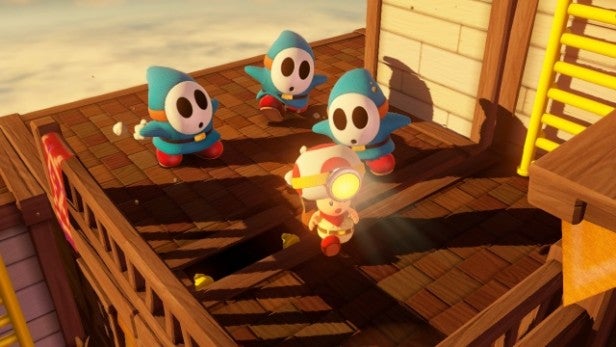 And that’s what makes it such a perfect family game. You can take turns trying to crack it, everyone watching the screen and shouting ‘try that one’, ‘go that way’, ‘there’s the last gem – grab it!’. You might crack the level, then one of your nearest and dearest will go back in and polish off the final, hard-to-find gem. The game even throws in a challenge for each mission, pushing you to get through without taking damage, find a golden mushroom or solve a puzzle in a set number of moves.

Nintendo’s also smart enough to break things up with spectacular though not too difficult boss battles, plus fast-paced minecart levels where you get to hurl turnips around, aiming with the Wii U Pad. There’s even a quick change of protagonist mid-way through, though the gameplay doesn’t change in any significant way. 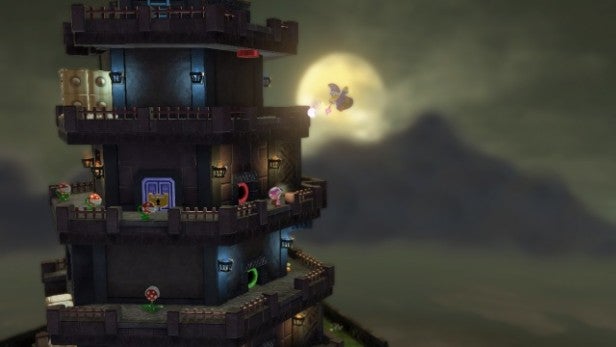 Meanwhile, Captain Toad is ample proof that the Wii U’s dated hardware is no barrier to a brilliant-looking game. There might not be much detail to the Captain and his fellow cast members, but do we really care about photorealistic textures when the lighting is so warm and magical, or when the animation is so full of personality and life? Nintendo doesn’t put a foot wrong with the sound or music, either. From Toad’s exuberant exclamations to a host of toe-tapping jingles, Capitan Toad is one huge charm offensive. There’s even a bonus thrown in for those with Super Mario 3D World data on their Wii U.

On the negative front, there’s little to say. The touchscreen wheel for rotating cranks can be annoyingly slow and unresponsive when you’re in a panic, but that’s about it. In fact, the worst thing you can say about Captain Toad: Treasure Tracker is that it’s a lightweight and fluffy confection. That’s nothing new for Nintendo, but where a Super Mario 3D World or Super Mario Galaxy introduces a new mechanic, repeats it, plays with it then tips it on its head – and does so time and time again, Captain Toad is happy to settle for a handful of brilliant ideas. Still, that doesn’t mean Captain Toad’s star turn can be dismissed as a throwaway spin-off. If you can grab it before Christmas, do so. It dishes out more fun per minute than some dour recent blockbusters managed in their entire running time.

Verdict
Captain Toad is Nintendo doing what Nintendo does best: a fantastic, fun-packed family game. It’s not as challenging on the reflexes as Super Mario 3D World, but it packs a lot of levels in and the constant push for more gems and bonus objectives keeps the replay value high. It’s a bit lightweight to go down as a stone cold classic, but it’s still one of the most charming, good-looking and downright adorable games on the Wii U.