Getting into video games in the late Eighties and early Nineties definitely leaves one with an affinity for the side-scrolling beat ‘em up. A genre largely absorbed into games like Bayonetta, God Hand and DMC, outside of a handful of ‘classic style’ brawlers, there was a point where these games, in the arcade, were the absolute pinnacle of what was possible.

Huge, detailed sprites and bold colours were the norm as superbly animated characters fought their way through hundreds of enemies to take on even bigger bosses, usually with a few of your mates along for the ride. They defined the arcade and were the games to play whenever the Fair came to town, or you stumbled across an arcade when on holiday.

Capcom were the masters of this genre, which is why there’s a fair bit of excitement surrounding this collection, only announced last week. They’ve been on a pretty hot streak with the retro re-releases as of late, sticking a bunch of beloved classics together with a host of supplementary material and some modern tweaks. Here, you’ve got seven games, with two of them released outside of the original arcade for the first time.

Final Fight, the absolute classic, is probably the weakest of the bunch. It’s only two player, for starters, while the rest of this collection is at least three player titles. It’s the oldest, and lacks a bit of the refinement the other titles brought to the formula. Captain Commando and Warriors of Fate add a bit more flash to the combat, and more variety to the mix in the way of selectable characters, special stages and even things like rideable robots and horses. 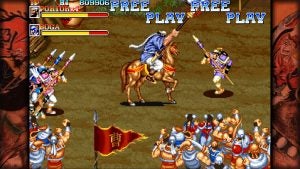 The most interesting two titles are Armored Warriors and Battle Circuit, released fairly late on in the genre’s golden era in 1994 and, amazingly, 1997 respectively. Armored Warriors has a mech theme, with bloody great big robots knocking strips off one another. The sprites here are huge, even the normal enemies, and the key feature is the ability to pick up guns and limbs you’ve broken off dispatched foes and use them yourself, acquiring a host of different moves and means of attack.

Battle Circuit, a four player game and clearly the pick of the bunch of this collection, is a futuristic scrapper with a load of special moves, unlocked by picking up currency dropped during the levels. It looks great, and shows signs of the changes the genre needed to make in order to stay alive as the industry changed with the release of the PlayStation and suddenly, ‘arcade perfect’ was something you could have in the home and 3D titles were the new hotness.

That’s the thing about this genre. Stripped from the arcade setting, with unlimited continues and no consequences to death, these games can be painfully repetitive. The difficulty eventually reaches a point where dying is inevitable, rather than avoidable, and this would’ve been to get you to stick another coin in the machine. Here, it’s just a bit of a pain in the behind. There’s not a stinker in this set, and yet, you’d be hard pressed to want to play them more than once through. These games would really have benefited from some new unlockable extras, but they’re simply presented as they were, pretty much arcade perfect.

Played with friends, locally, there’s still fun to be had. An slice of daft, over the top action that’s simple enough for anyone to pick up and play. At their best, these games are a solid hour of set pieces and boss fights and, on that first time through, they hold up. It’s worth pointing out, this collection is a fantastic fit for Nintendo’s Switch, with the detachable Joycons allowing for at the very least two players to play at the drop of a hat. Online play has been added, and although a cool addition to a bunch of games 21+ years old, with the ability to join a game directly or create a lobby and jump between titles, they’re really best experienced shoulder to shoulder with your pals. 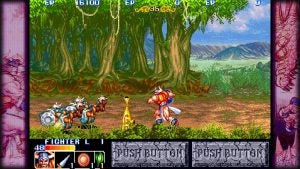 Other than the new online mode, this collection is a bit bare bones. While the Street Fighter 30th Anniversary set had an interactive timeline and the Mega Man collection had new modes created from the existing assets, all that’s on offer in the Capcom Beat ‘Em Up Bundle is some admittedly very nice artwork and design documents. It even says “view movies and the artwork gallery” on screen, but unless they’re extremely well hidden, there’s no video content. A missed opportunity.

Although the seven games on offer are good examples of the fun, but shallow genre, it’s hard to shake the feeling that with a bit more attention – the kind Mega Man and Street Fighter received – this could have been another must have retro collection. It’s also a shame that three of Capcom’s finest – Aliens vs Predator, Cadillacs and Dinosaurs and Dungeons and Dragons – are no doubt a licensing minefield, so they’re not a part of this set. It’s so very close to being a definitive release of some arcade history, but unfortunately it’s hard to recommend to anyone other than big fans of the beat ‘em up genre.