Okay, so the controversy over Canis Canem Edit isn’t entirely undeserved. This is a game where kids beat up other kids, and occasionally do so with baseball bats. It is a game that encourages the throwing of bricks and bin-lids, a game in which many situations are best dealt with by violence, theft or both, and a game in which the lead character is the sort of ASBO-flaunting teen who keys your car on the way home from a night drinking cider in the park. If you let a ten-year-old anywhere near it, you’re absolutely mad. 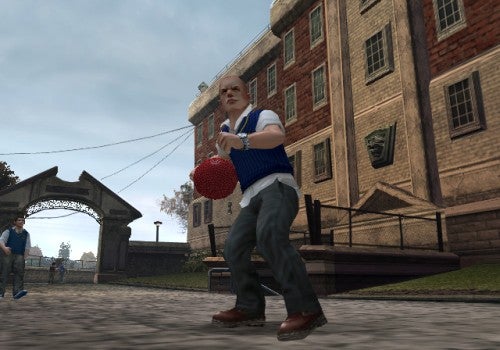 On the other hand, none of this changes the fact that Canis Canem is an absolutely stunning example of game design, arguably doing more to advance the open world genre than any of the so-called next-gen efforts – Saints Row or Just Cause for example – with a shift away from the basic fast-driving, sharp-shooting, gang-banging nonsense that GTA first bought to the party, and towards a game of more intimate and varied goals and challenges. In fact, the game it’s closest to in spirit is Dead Rising; by narrowing down the game world to a fairly small area and populating it with a more interesting cast of characters, both games build an environment that feels richer in life and personality. Never mind the size, check out the depth.


Here that environment is Bullworth Academy, an educational institution run by a vaguely psychotic faculty, and peopled by a collection of rich-kids, hardnuts and assorted social misfits. After a brief ‘welcome to the school’ preamble, Jimmy’s relatively free to explore it, completing missions and side-tasks, making friends and enemies, and endeavouring to stay out of trouble. 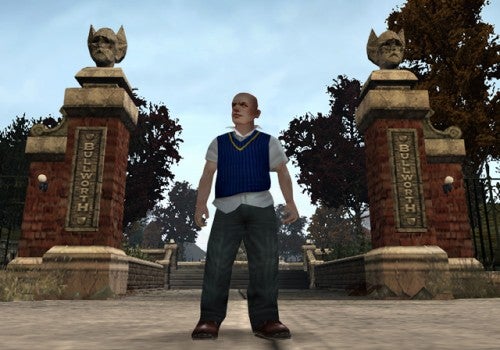 Why only relatively free? Well, unlike GTA and most open-world games, in Canis Canem your day is highly structured. You’re expected to get up in the morning, go to your first lesson, have a short lunchtime break, return for a second lesson, enjoy a little time in the evening, then be back in the boy’s dorm before bedtime. Of course, you don’t need to stick to this routine – in fact, you won’t get very far if you do – but the halls and pathways of Bullworth are patrolled by zealous prefects, and if they catch you playing truant during lesson-time or trespassing school buildings after nightfall then there will be repercussions.


This instantly has a major effect on the way you play. Firstly, some sections have to be played like Metal Gear Solid-lite, with Jimmy sneakily completing objectives while dodging the gaze of nearby prefects (handily shown on the on-screen mini map). Secondly, a smart player learns to organise missions around the structure of the day, as it’s easier to achieve certain tasks while the prefects are off-guard (during lunchtime or early evening) or while the halls are mostly deserted. Finally, you learn the benefits of developing short-cuts (so you can escape the prefects in a chase) and using the bins and lockers to hide-in (always good when the heat is on).

Luckily, when you are captured during lesson-time you’ll usually just end up in class, which is far from the worst place you can be. Unlike so many of the real-life lessons I endured in my far-gone school days, these bring tangible benefits. Just complete the simple mini-games – making words out of a jumble of letters in English, or finishing a simple rhythm action game in Chemistry – and you’ll learn to taunt your way into trouble or grovel your way out of it, or how to manufacture stink bombs and itching powder. Even Gym class has its uses, as you can build up fighting moves in the wrestling ring or improve your accuracy with the school’s makeshift projectiles. 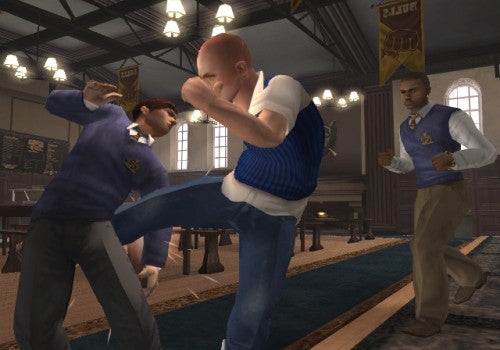 While all this is going on, you’re also making your way through the school’s social scene. There are individual bullies wandering around, plus cliques of nerds, preppies, greasers and jocks to deal with. Befriending these groups makes sense – they’ll offer you missions and occasionally help you out with items – while antagonising them can make your life much harder. True, you can’t make an omelette without breaking some eggs, but the more you beat up on one group, the more they’ll look to gang up and give you payback. And if you’re wondering how threatening a gang of nerds can be, remember: these guys might be busy playing ‘Grottoes and Gremlins’, but they sure know their way around a stink bomb.


The basic ingredients of the game are solid, but what makes the game work is the way they’re all put together. Bullworth is a fantastically consistent universe. The school itself is laid out logically and easy to navigate, but chock-full of shortcuts and secret areas to discover, while the cast is full of personality. From drunk teachers to fascist headmasters, gruesome cooks to grizzled, war-vet tramps, geeks both scrawny and chubby, short-skirted bimbettes, tiny whiners and brain-dead beefcakes, the game throws in every schoolyard cliché going yet fills each one out with some individual detail. The dialogue isn’t always hugely funny – or at least not as funny as it thinks it is – but it’s never less than acutely observed. Compare it to the empty stereotypes of Just Cause, Scarface or Saints Row and it’s hard not to be impressed. 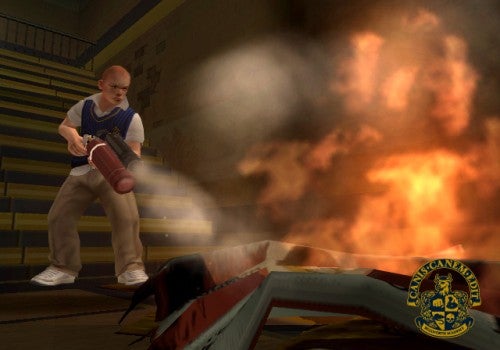 The missions, meanwhile, are mostly excellent. Yes, there are the traditional fed-ex delivery missions and collect ‘em all jobs, but even these are given a twist by the choice of item locations (the girl’s toilets, the school trophy cabinet) or the presence of the ever-vigilant prefects. Otherwise, stealing back a revealing diary or playing mildly unpleasant planks on Halloween night is a lot of fun, as is protecting a wannabe nerd politician from stone-throwing hecklers.

Underneath it all there’s a real sense of progression and deeper storyline, as assumptions are reversed, friends become enemies and enemies become allies. There’s even – whisper it – a hint of morality, as Jimmy comes more and more in opposition to the Nietzschian ‘dog eat dog’ philosophy espoused by the Principal and the psychotic prankster Gary. Maybe might isn’t always right, after all. 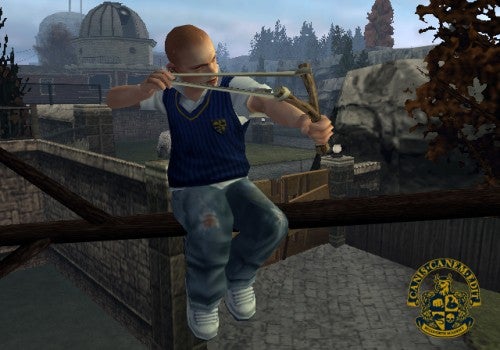 And just when you think you’ve got to grips wtih Canis Canem, the game opens out a little more. The gates to Bullworth Vale are opened, and you’re allowed to explore the town by bike or skateboard, enabling you to do a little shopping for new threads or earn a bit of money on the side delivering papers. Before long, you’re even doing favours for the faculty, finding hidden bottles of booze for your whisky-sodden English teacher, or collecting items for the spectacularly unhygienic cook. And all the while, the game packs in a hundred different side-quests, which have you collecting crabs from the town harbour one minute, dropping off chocolates for a lovelorn kid the next. There are items to collect, and even time for a little romance. Chat to girls, give them flowers, and who knows where it might lead…


All this is supported by some of the most elegant game mechanics of any open-world game. The combat system works brilliantly, with a range of punches and grappling moves, to be followed by bone (and nut) crunching combos. The game plays generous with multiple save points and a school bus that can quickly return you from town, and the only major gripes are that it’s occasionally too easy to be cornered by prefects or teachers, resulting in the instant failure of a fairly extensive mission, and that doing so usually means having to return the next day and go through the whole thing again (though at least you can cut through the preamble). Would checkpoints and a restart mission option have caused that much pain? 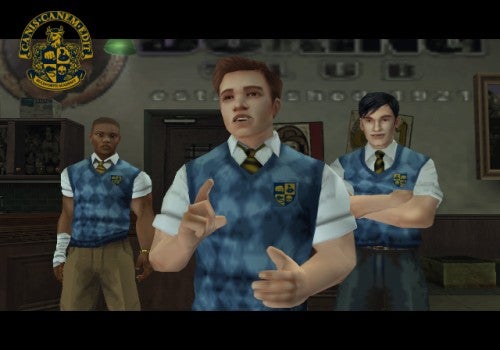 Still, the mechanics aren’t the only thing to admire. Canis Canem isn’t a feast of visual effects or high polygon counts, but it is packed with genuine artistry. The look and feel is distinctive and almose seamlessly coherent, with brilliant touches in the character design (the cold sores around nerd-queen Beatrice’s lips or that disturbing hint of Y-front poking out of Melvin’s trousers), while the animation practically seeps personality (much like Melvin’s Y-fronts).


The voicework matches this perfectly, and the soundtrack is amongst the best I’ve heard this year. The dominant instrument – the bass – gives the game an emotional beat, getting funky when you’re trying to crack a locker, then going into slap-happy overload when you’re chased by a gang of angry greasers. All in all, Canis Canem is right up there with the likes of Shadow of the Colossus as an example of how next-generation graphics aren’t the only way to create an immersive and engaging game world.

But despite all this, I can’t quite love the game as much as I’d like to. I have the same problem with it that I do with a lot of nostalgic celebrations of schoolyard antics. Yes, the thought of Chinese burns, groinal injuries and wedgies still fills some childish part of me with a golden glow, but there’s another, grown-up part of me that finds some of this stuff not just juvenile, but deeply unpleasant. 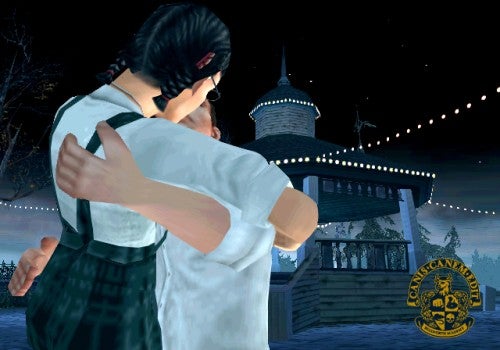 If games offer us the chance to live fantasies we’ve never lived out in real life, isn’t it a bit sad to take the part of a playground thug who laughs at geeks and has to punch his way out of trouble? For every nine minutes I’ve been entertained or where I’ve laughed out loud at Canis Canem, there’s been one where I’ve felt a bit unsettled. Is it good for a game to laugh at this behaviour? Is this really something a grown man should be playing? I guess you could say the same about Zelda or Mario, but at least those games don’t leave me with a bad taste in my mouth.


And that’s why, in the end, my personal score for this one is an eight, not a nine or ten. Don’t get me wrong. Judging by every metric going this is a brilliant game, and your opinion could easily differ – feel free to add or subtract points according to taste. But overall, I can’t help thinking that Canis Canem takes a rather cheap, easy, mean-hearted approach to its school-days subject matter, and that the game is slightly the worse as a result.


Technically and artistically, Canis Canem is a triumph, and you’d be hard pushed to name a better open-world game this year. Whether its treatment of school is funny or unsavoury is a matter of personal opinion. 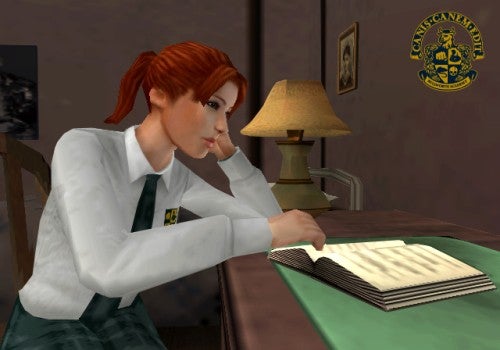