The Canton Smart Soundbar 9 is another winner from the the German audio brand. Impressively built, good-looking and featuring three HDMI inputs, the Canton is a detailed and nuanced performer – and although it lacks a subwoofer, bass output is decent. The only real question marks are over its rather premium price and lack of any real “smarts”

Both feature built-in Chromecast and can slot into a multi-room setup – but, unlike the Smart 10, the Smart Soundbar 9 can’t decode Atmos tracks.

Canton’s previous soundbar and soundbase models, such as the DM100 and DM55, have fared well, so how well does the Smart Soundbar 9 fare in this brave new “smart” world?

The Canton Smart Soundbar 9 is the step down effort from the Atmos-toting Soundbar 10. Announced and released in 2019, it went on sale for £699 / €699. It has not been released in North America or Australian markets.

The Canton Smart Soundbar 9 has a slick, premium-looking body. It’s heavy at 5.1kg and measuring 890 x 70 x 100mm (WHD), it’s best suited for TVs of 40-inches or more. It comes in two finishes, silver and black, with the former option best suited to lighter and brighter rooms. 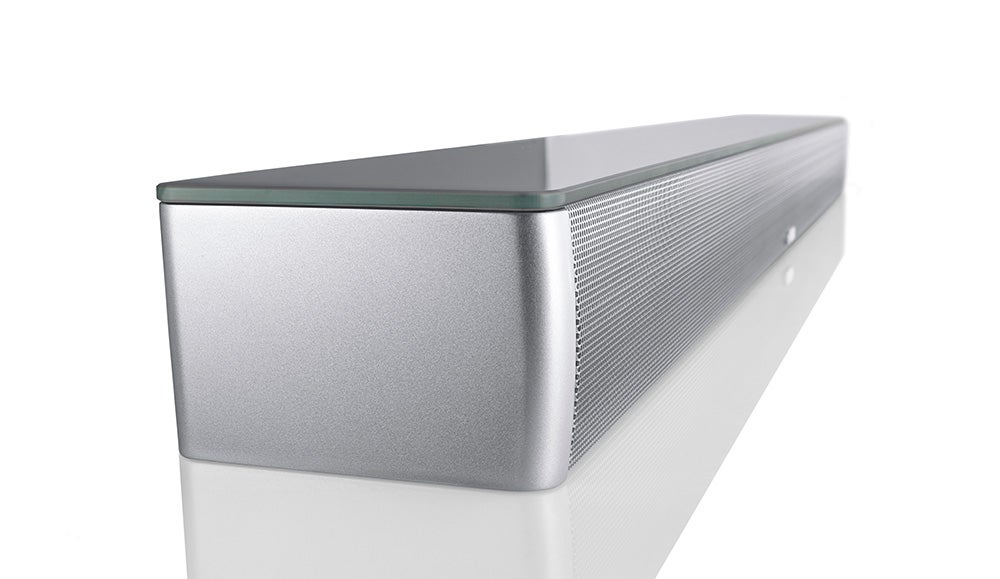 The top surface is reflective and glossy and can attract smudges, but these can be easily wiped off with a cloth. The front grille covers most of the fascia, with the Canton logo in the centre sitting just beneath an LED display. Text on the screen is clearly visible from normal sitting distances, and there’s a green/red light that indicates the soundbar’s status.

Connections are surprisingly plentiful. HDMI connections tally at 4: one HDMI-out and three HDMI-ins all capable of 3D and 4K HDR passthrough, with support for HDCP 2.2 and CEC control. The HDMI-out is ARC connection and the port needed for connection to a TV. 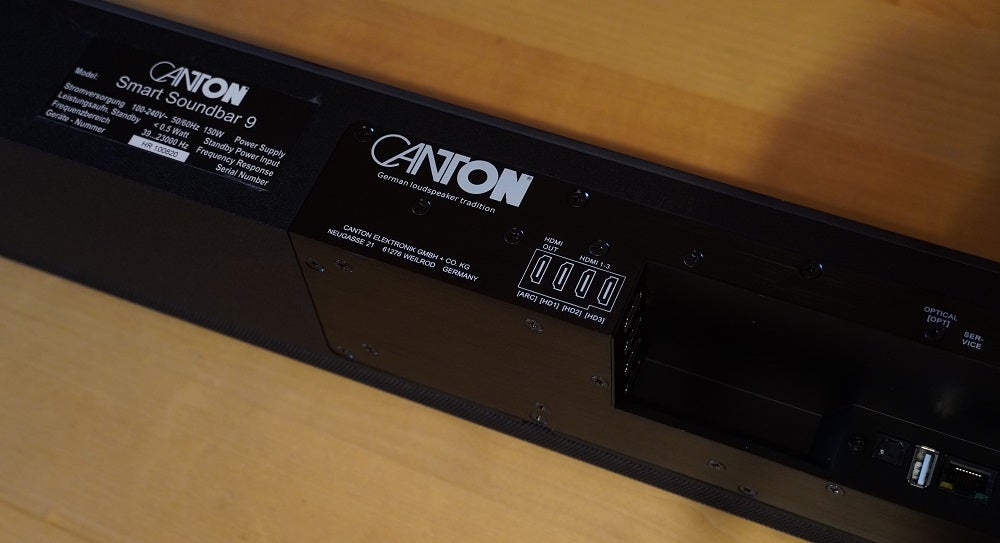 Other connections include digital optical and coaxial, Ethernet, sub-out and an analogue line input. For wireless connections there’s Bluetooth (3.0 and aptX) and Wi-Fi (2.4GHz and 5GHz).

The Canton Smart Soundbar 9 also comes with a remote control. It’s flat and heavy; it isn’t a unit you’d easily misplace. It has the usual assortment of menu and navigation buttons, sound modes and playback, all laid out clearly – although the texture of the buttons and feel of the remote overall may take a while to get used to.

Wireless setup is achieved through the Google Home app. I found this to be more difficult than it ought to have been, but I’m not sure whether that’s an issue with the Google Home app or the soundbar itself, but the Canton Smart 9 didn’t appear in the Home app a few times before it ended up connecting.

Chromecast is built-in, so audio can be “cast” to the Canton Smart 9 on the same Wi-Fi network. That means YouTube, Tidal and TuneIn radio can be sent across and there’s native support for Spotify. Wi-Fi would disconnect from time to time, but recovery was pretty quick. 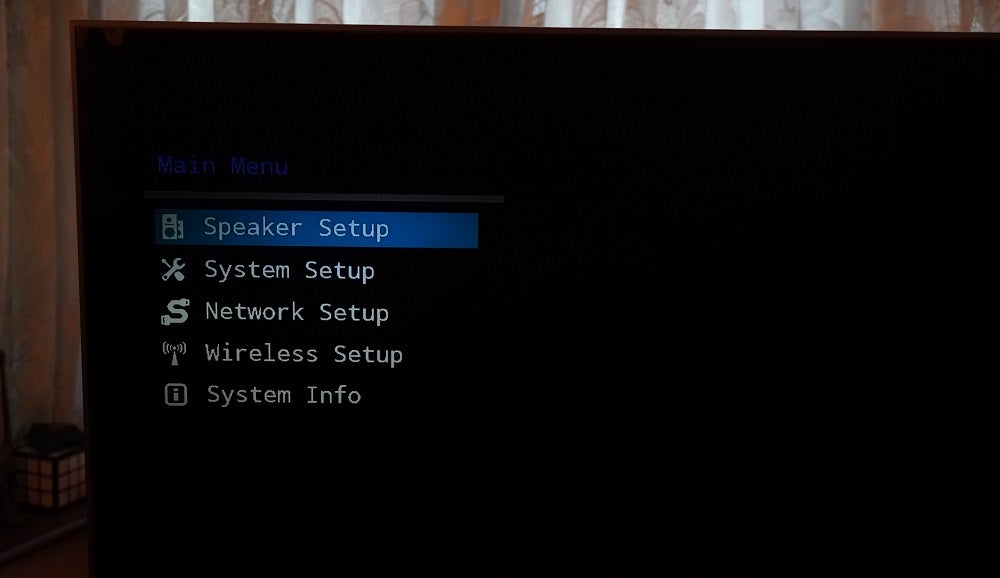 Now, while the soundbar has been labelled a “smart” one, it isn’t to the level of the Alexa-enabled Polk Command Bar. Any action you take will be directed through the Google Home app or Google Assistant on your mobile device. The Canton Smart 9 doesn’t have any built-in voice assistant – although you can pause and start music using vocal commands via Google Assistant on a mobile device.

The prospect of multi-room sounds enticing, but in truth it’s restricted to Canton’s own Smart series. It can be built up over time with the addition of subwoofers, active speakers and even an AV wireless amplifier that supports Dolby Atmos from Canton’s Smart series. 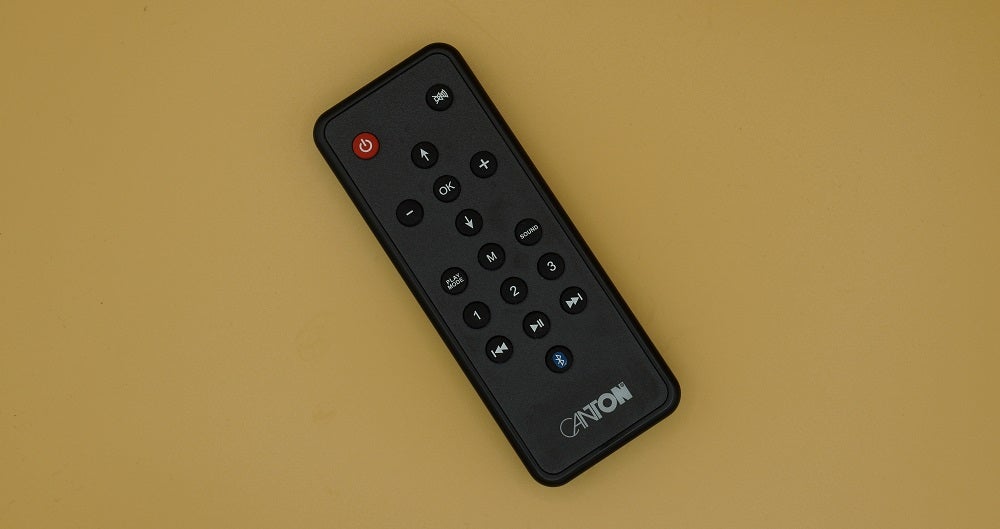 However, the Smart 9 doesn’t have the wherewithal to decode Atmos tracks. At best it can dole out Dolby Digital, DTS Digital and DTS digital surround. The Smart 9 does support Hi-Res Audio up to 24-bit/96kHz, however.

Other features include the ability to tweak bass, mid-range and treble EQ, and lip-sync technology for speech synchronisation.

The Canton Smart Soundbar 9 is a great-sounding unit. It’s crisp, detailed sound is revealing to the point where I could hear nuances in soundtracks I hadn’t heard before.

Mid-range performance is strong. The guitar strums that begin of Paris, Texas are piercing and resonant, setting a confident tone for the rest of the film.

This is an assured performer in terms of dynamics. The Canton Smart 9 steps up to the challenge of Christopher Nolan’s Inception, the loud smash of the train into Cobb’s car is both surprisingly loud and impactful, and the ensuing gunfight sees cars peppered with bullets and turned into twisted metal; the Smart 9 keeps up with the carnage with a great sense of poise, sharpness and clarity.

It also brings to attention the placement of sounds, with the left and right channels separated well enough to get a sense of the unfurling action. It’s a big sound, too, taller than I expected. However, the size of the soundbar means it isn’t the widest: it’s big enough to feel a medium-size room with ease. If anything, it could go louder and bigger if you want to invoke the ire of your neighbours. 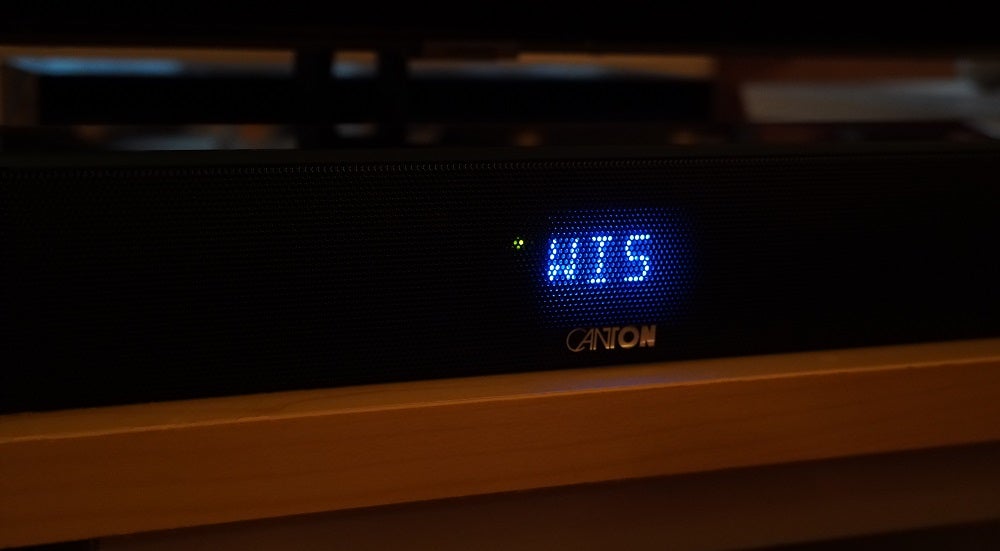 Another Nolan film, Interstellar, also got a workout, with the Smart 9 remaining just about composed in the face of Hans Zimmer’s overwhelming organ score, communicating plenty of that film’s intensity.

The Canton Smart 9’s sense of detail and weight made the scene where the crew of Endurance fly down to the surface of a water planet a thrilling ride, as the ship bucks and rocks as it zips through the atmosphere in convincing fashion. 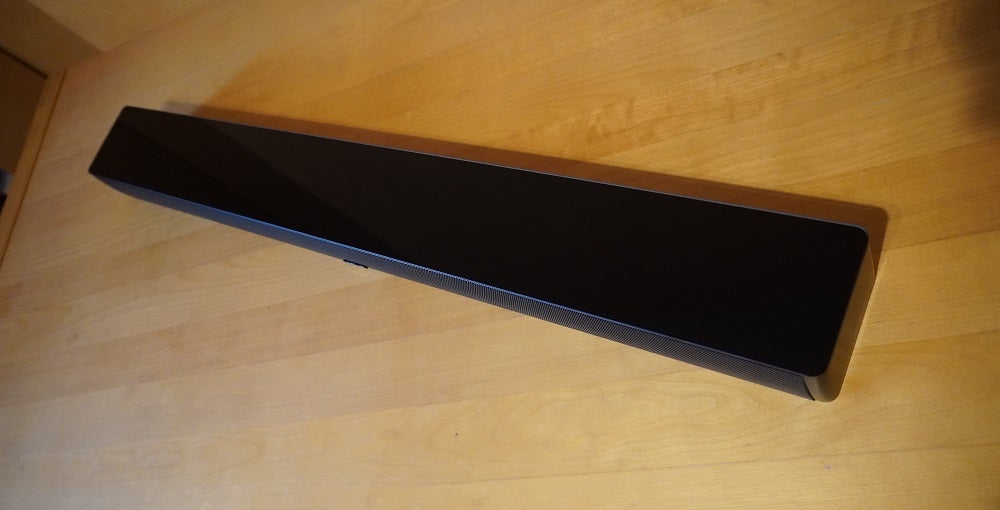 Music performance is similarly accomplished with a big, clean and detailed performance. The presentation of Elbow’s Some Riot edges towards ever so slightly bright in Music mode, but the Smart 9 refrains from harsh or shrill tones.

Bass performance is sufficient enough, but it’s limited in terms of depth, with some noticeable distortion in the cabinet when bass frequencies are taxed. Canton’s SUB 8 wireless active subwoofer would be the most suitable pairing – but at £599, it doesn’t come cheap.

You should buy the Canton Smart Soundbar 9 if…

If a stylish, impressively built and great-sounding soundbar is what you want then the Canton Smart Soundbar 9 warrants a place on your shortlist. While the expense is great, the performance is terrifically entertaining, even without the presence of a subwoofer.

With three HDMI inputs, if you’re someone who needs to unclutter their AV set-up then the Canton can help simplify matters.

Most soundbars are looking at ways of getting height channels/virtual surround sound into their latest bars. If a more conventional performance is what you’re looking for then this Canton delivers that well.

You shouldn’t buy the Canton Smart Soundbar 9 if…

For the full home cinema experience you’ll need a subwoofer, and the wireless Smart 8 SUB that works in tandem with the Smart Soundbar 9 would require you to spend a further £599 – although the sub-out connection does offer the ability to add a subwoofer of your choosing.

The Canton Smart 9 isn’t hugely smart, either, with only Chromecast built-in. Everything else is effectively done off-board.

The Smart 9 doesn’t deal with the like of Atmos and DTS:X. Another option within Canton’s range that does is the Smart Soundbar 10.