In the movie world, sequels should be bigger and better than the original, but some simply look to repeat what came before with a few tweaks. Canton seems to have taken this approach with the Movie 130 compact 5.1 system – the follow up to its successful Movie 125 MX from last year – keeping the satellites pretty much the same but tweaking the subwoofer. Let’s hope this revamped version is more Evil Dead 2 than Men In Black 2. 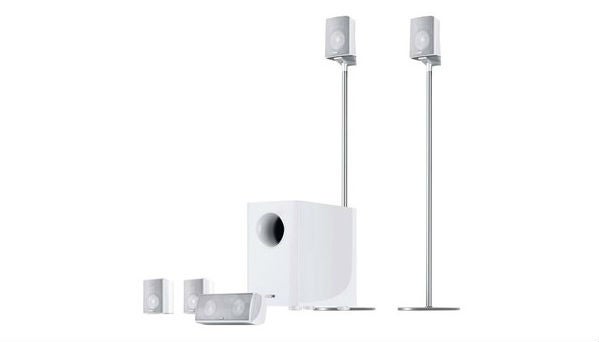 Canton has kept faith with the design of the speakers, again offering a choice of high gloss black or white. The four identical satellites used for the front and rear channels feature the same cabinets as the 125s, each one measuring just 115mm high. That means you can discreetly place them on your TV stand and furniture with minimal disruption to your living space.

As we unpacked them from the box, their excellent build quality was immediately apparent. They have a nice bulk to them (each one weighs just under a kilo), which doesn’t necessarily equate to great sound quality but it’s a good start. Then there’s the way the edges are smoothed-off and taper towards the rear end, giving them a touch of elegance that you don’t always get from compact speakers. We were sent the white version to test, but the gloss black is by far the sexier finish.

On the front is a mesh that can’t be removed, hiding the two speaker drivers. On the back a recess houses metal spring clip terminals – push these in to reveal the hole, feed in the bare cable through and it grips the wire when released. So far so good, but sadly their position inside the deep recess makes them hard to access, requiring serious manual dexterity to feed the wire into the hole. The irony is that Canton calls this cable connection system ‘Easy Link’.

The satellites can be placed on any flat surface (self adhesive foam pads found in the box) but there are a couple of alternative ways to mount them. You can place them on the wall using the supplied metal brackets (finished to match the colour of the speakers), which are L-shaped for the satellites and horizontal for the centre speaker. Canton also sells optional floor stands (LS90.1), which will set you back somewhere in the region of £100 and make the speakers look even more elegant.

As for the centre speaker, it’s slightly larger than the fronts and surrounds to accommodate the extra woofer, but still compact enough to cause no problems when placing it below your TV – a process aided by its horizontal orientation.

The subwoofer’s design is different to that of the Movie 125 MX. The cabinet is marginally taller and slightly heavier, with a greater internal volume. Whereas the Movie 125 MX’s sub had a mesh on the front this one is mostly blank, except a large port towards the top. It’s well-built but not exactly compact, so it’ll require some shrewd positioning to stop it sticking out like a sore thumb.

Features
The rear and front satellites of the Canton Movie 130 are of a two-way design with a single 80mm woofer and a 15mm tweeter above it. The centre speaker employs two of these woofers to lend extra prominence to dialogue, plus the same tweeter. The use of identical drivers across the system is designed to achieve tonal consistency.

The subwoofer’s on-board amplifier power has been lowered to 120W from the Movie 125 MX’s 140W. It moves air using a 200mm bass woofer, and in terms of frequency response it ranges from 38Hz to 140Hz, with a crossover point that can be adjusted between 90 and 140Hz using the dial on the back of the unit. 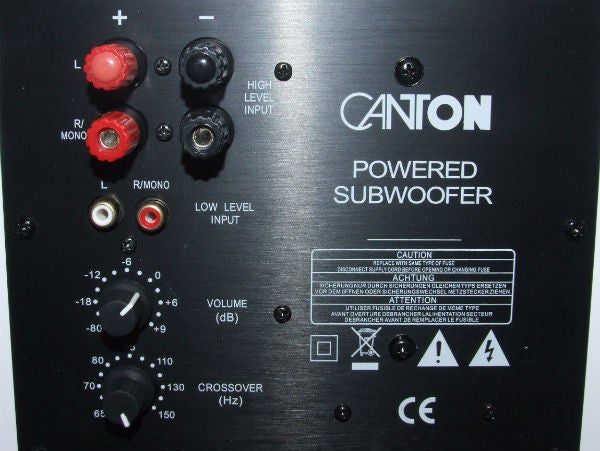 Performance
With Blu-ray soundtracks, the Movie 130’s performance is fast and sparky, conveying busy action scenes in a tidy and refined manner while steering clear of the coarseness that blights cheaper all-in-one systems. It’s an easy and enjoyable listen, injecting events with just enough dynamism to get you involved, but when handed a high-octane scene it doesn’t quite go for the jugular like you wish it would.

We took Clash of the Titans (2010) for a spin and the Canton revels in the movie’s mixture of breathless action and grandiose dialogue. During the scene in which Perseus’s crew is attacked by massive scorpions, the Movie 130 reproduces the effects with pleasing crispness, creating a spacious soundstage in which individual elements are given plenty of room to breathe. Rear effects fire into the room with great timing, steering between speakers smoothly.

The system is tonally consistent and the subwoofer interacts seamlessly with the satellites, giving the soundstage the requisite sense of unity. 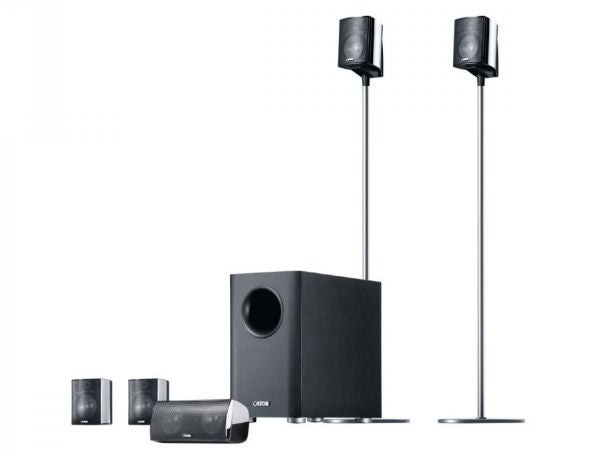 We’re particularly impressed by its presentation of high-frequency detail. The delicate crunch of gravel beneath the warriors’ feet, the light chink of metal armour and the swishing of scorpion tails all sound wonderfully crisp and airy, backed up by solid midrange frequencies.

This keeps dialogue right at the forefront even in the midst of a furious action scene, helping you keep up with vital plot points. And during the film’s more contemplative scenes, this clearly-voiced speech is supported by delightful background details and a silky-sounding score.

But it’s at the other end of the sonic spectrum where the Canton’s weakness lies. While the subwoofer is capable of relaying scorpion footsteps with a decent amount of punch, it’s not as enthusiastic or fulsome as we hoped. We had to crank the level fairly high to get it involved and even then it couldn’t muster the thunder of rival systems. That goes for the system as a whole – its polite and polished sound is very enjoyable, but if you’re looking for pure exhilaration and formidable firepower then you might be advised to audition systems like the Roth OLi 10 or the Wharfedale DX-1 HCP.

Verdict
In most respects the Canton Movie 130 is a worthy successor to the Movie 125 MX, matching its predecessor’s stylish design, exemplary build quality and sparky, detailed sound. But a little of the older system’s power and authority has gone out of the window, resulting in a sound that’s never anything less than enjoyable but lacks the dramatic punch that really gets the pulse racing.