There are loads of compact speaker systems on the market offering you the chance to upgrade your sound system without making a big dent in your bank balance or taking up half the living room. Systems from Jamo, Tannoy, Cambridge Audio and Teufel have all impressed us with their superb sonics and space-saving designs, but now here’s another one to consider – the Movie 125 MX from German manufacturer Canton. Like its above rivals, this system sells for around £500, but with such fierce competition at this price point Canton will need to do something special to really stand out. 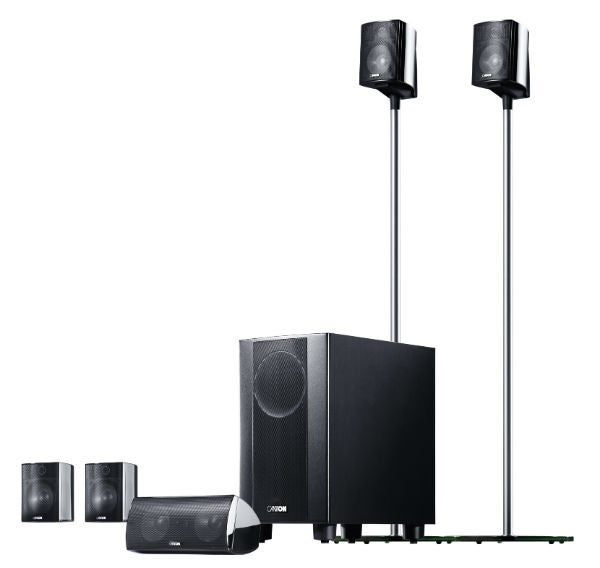 It’s a straightforward 5.1-channel package that throws four identical 115mm-high satellites, a bigger centre speaker and an active subwoofer into a single box. It’s one of ten different systems within Canton’s ‘Movie’ range, which also includes systems with tall column speakers and some with even smaller satellites.

The design of the 125 MX’s satellites is exceptionally good. As you pluck the components from the box you can tell they’re cut from a different cloth than the hollow, lightweight speakers you get with many all-in-one systems. Each satellite speaker weighs 0.8kg and boasts a classy high gloss black finish, although they also come in a choice of silver and white. An extra touch of elegance is provided by the curved sides, but it’s a shame Canton blotted its copybook with some ridiculously fiddly springclip terminals on the back, which are sunk into a deep recess that makes it really tricky to guide the cables into the holes. Ironically, Canton has called this system ‘Easy Link’. 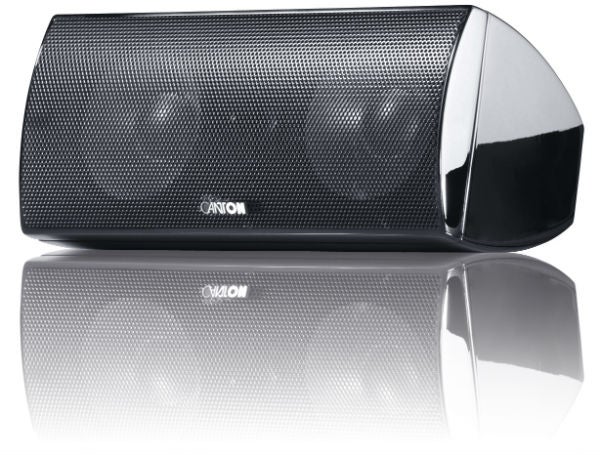 The 195mm-wide centre channel shares the satellites’ superb build quality, down to the lustrous black finish and curved sides, but sadly it also shares those ultra-fiddly speaker terminals. It looks like an elongated version of the satellites, horizontally orientated in order to slot easily under your TV. As for the sub, it shuns the high-gloss black finish for less glamorous black styling and at 425(h) x 240(w)mm it’s not particularly compact, but it’s robustly built and inoffensive to the eye.

The front, centre and surround speakers all use a two-way closed design. The fronts and surround feature a single 80mm aluminium-finished woofer with a 15mm tweeter above it. The centre speaker features two 80mm woofers and a tweeter, designed to give dialogue extra prominence.

The subwoofer is endowed with a 200mm woofer and a 140W amplifier, plus it uses Canton’s SC technology, which ‘redefines the relationship between speaker volume and bass reproduction’, using filter switches and extends the speakers’ transmission range by an octave and more downwards. 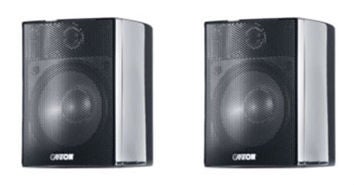 Installation-wise, it’s fine to strategically place the satellites around the room on shelves or furniture, but if you’d prefer something a little more rigid then Canton sells optional floorstands (LS 90.1 and LS 95.1). You can mount them on the wall if you prefer, and for that purpose there’s a complete ‘Movie Mount’ kit in the box, including a sturdy metal bracket for the centre speaker, plastic brackets for the satelites and all the fixings you need. 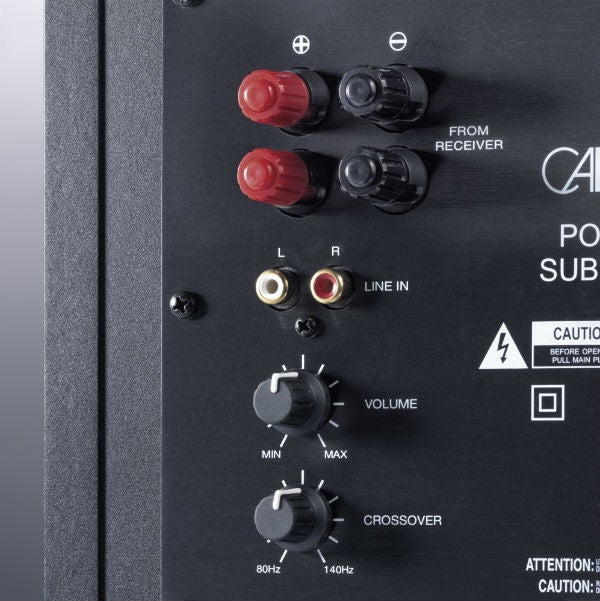 Getting the subwoofer to integrate with the satellites and adjusting the low-frequency response for the needs of your room couldn’t be simpler thanks to the controls on the back. There’s a crossover dial, ranging from 65Hz up to 150Hz, and a volume dial that unusually is labelled in dB and goes from -80 up to 9. Alongside these controls are L/R speaker-level inputs (binding posts) and L/R low-level cinch inputs. Power can be controlled automatically, plus there’s a power switch to shut it down completely.

After running the 125 MX system in we quickly learned that it’s a very competent performer, offering an exciting, tightly-integrated and, most importantly, crisp sound that doesn’t fall foul of common budget speaker nasties. It really sparkles with Hellboy II’s DTS HD Master Audio soundtrack, particularly the battle between Hellboy and the Forest God in chapter 12.

It’s a silky sound that doesn’t fall apart when pushed, refusing to let high-frequencies sound shrill or distorted. You can sit back and watch raucous action scenes like this without having to keep turning the volume up or down to prevent your ears from getting fatigued. 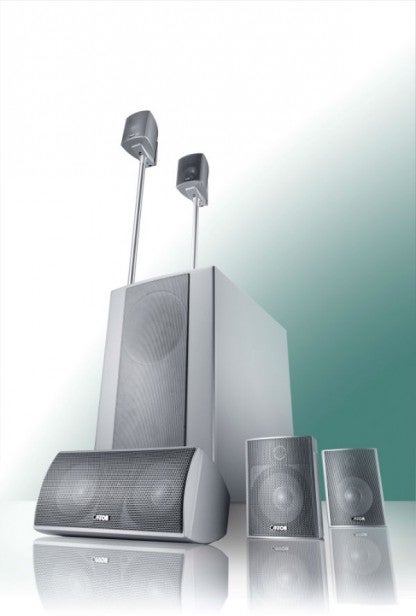 The tinkle of glass as Hellboy frees the baby from the car shows off the system’s beautiful high-frequency handling, while the roar of the creature and screams of terrified bystanders are certainly authoritative but never uncomfortable.

In fact most effects are delivered with real thrust, particularly blasts from Hellboy’s Big Baby shotgun, which sound deep and punchy. That’s due in no small part to the efforts of the sub, which integrates seamlessly with the satellites without undermining them. It’s not one of those subs that’s likely to blow your roof off, but it simply does a brilliant job of underpinning the other speakers. 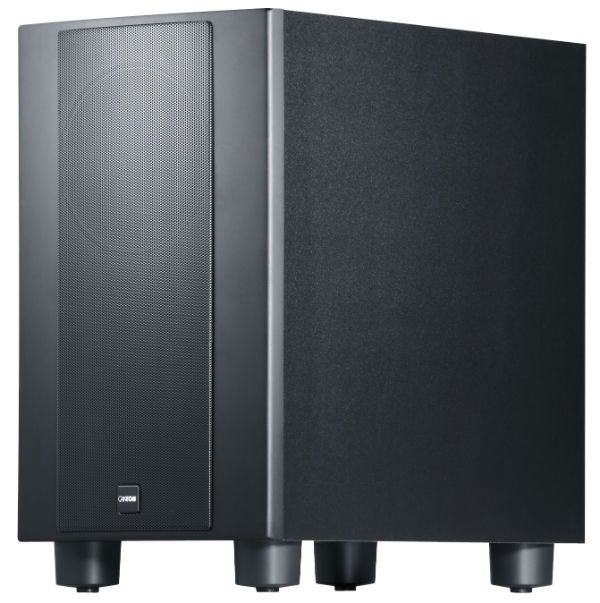 Dialogue punches through the mix easily too, and surround effects are spread around the room reasonably well. If you’re looking for a wider or more ferocious sound then you might need to save up your pennies for larger speakers, but as compact packages go this is a really impressive proposition that measures up well to the similarly-sized competition.

If you’re trying to decide which compact home cinema speaker system to buy, the Movie 125 MX isn’t about to make your choice any easier. Like systems from Jamo, Tannoy and Cambridge Audio, Canton’s system offers superlative build quality, smooth sound quality and a minimal footprint that makes it easy to integrate into your living space. You get a bit more for your money from Jamo’s cheaper and more powerful A101 HCS 5 system, but if Canton does get your vote, we guarantee you won’t be disappointed.