What is the Canton DM55?

The DM55 is the successor to Canton’s superb DM50 soundbase, which scooped our award for Best Soundbar back in 2014. This new version throws in some fresh features and improved sound quality, all of which is likely to consolidate the German brand’s place at the top of the soundbase tree.

As the smallest of three models in Canton’s range, it’s designed for small to medium sized TVs – the £399 DM75 and £529 DM100 cater for larger rooms and screens.

The DM55 retains the sumptuous design of its predecessor. The thick glass top panel provides a sturdy surface for your TV, while an aluminium grille on the front and thick feet add to the overall sense of luxury.

It’s not an attention-grabbing speaker by any means, but that’s exactly what you want from a soundbase. The minimal black styling blends harmoniously with my black Samsung TV, but the silver and white versions might be a better match for your set.

You can place TVs weighing up to 40kg on top, provided the stand fits well within the 545mm by 300mm surface area. If you have a TV over 50in, I’d recommend stepping up to the DM75 or DM100.

On the front is a small LED display above a subtle Canton logo. The display only has room for three digits, which feels a little simplistic when dealing with some of the setup menu options but it’s fine otherwise. Thankfully it disappears when idle, leaving you with a blank fascia that doesn’t distract from the screen.

A recess on the back houses optical, coaxial and analogue RCA inputs, and there’s a subwoofer output should the Canton’s own bass drivers leave you wanting more.

But anyone hoping to connect HDMI-equipped devices or take advantage of ARC functionality is out of luck, plus the lack of 3.5mm minijack input is unusual.

One of the secrets of Canton’s success is that it takes a hi-fi approach to its speaker design. The DM55 uses separate tweeters, midrange drivers and woofers for each channel (six drivers in total) powered by a 200W amplifier

Sound modes include Stereo and DTS TruSurround, plus a new Voice mode that boosts speech and a Hotel mode that sets a maximum volume limit. The DM55 will also decode two-channel Dolby Digital.

Elsewhere on the spec sheet is apt-X Bluetooth and a new Bluetooth select function that automatically switches to Bluetooth when it detects an audio signal. It’s more useful than it sounds.

A helpful automatic on/off function fires up the unit when it detects a signal on the optical or coaxial inputs and shuts down after 30 seconds if there’s no signal. Simply turn off your TV before going to bed and the soundbase will automatically follow suit.

An Eco mode automatically shuts the unit down if a signal isn’t detected for an hour (although it’s disabled if auto power is activated). 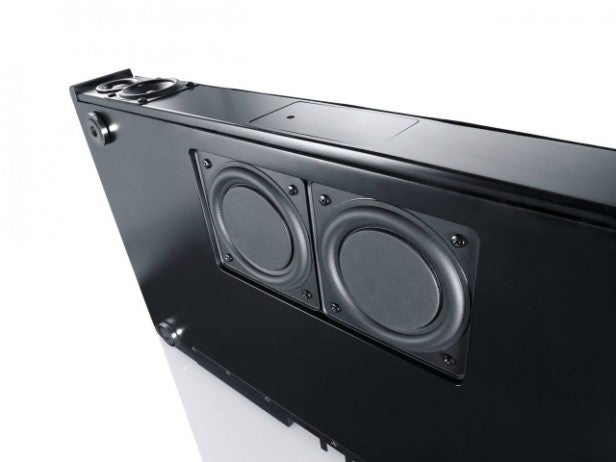 The beauty of having no HDMI ports is that it simplifies the setup process – just run an optical cable between the TV and soundbase and you’re pretty much good to go.

Of course you can also tweak the Canton to suit your sonic sensibilities. There are bass and treble settings, which range from -3 to 3, as well as three EQ modes for different installation positions – under TV, freestanding or in a rack below the TV.

You’ll also find lip sync and dynamic range control adjustments. These functions can be accessed by holding down either the ‘play mode’ or ‘sound’ buttons – use the volume keys to turn them on and off. The three-digit setup menu is predictably basic, but you’ll get used to it.

Heavy, nicely-sized and dotted with chunky rubber keys, the DM55’s remote is a joy to use. Its black and silver colour scheme looks nice too. There are up/down keys to cycle through the inputs and buttons for sound modes, tone controls and Bluetooth pairing. The DM55’s IR learning function means you can carry on using your TV’s remote if you prefer.

The DM55 builds on the brilliant performance of its predecessor with a sound that’s not only powerful but also finessed and subtle. In fact it sounds more like a decent separates system than a soundbase.

Loading current fave Star Wars The Force Awakens into my Blu-ray deck, the DM55’s hugely powerful woofers lend scale to the rumbling star destroyers and big explosions. The woofers’ deep, weighty yet well-controlled bass has the feel of an external sub, helping the DM55 fill even the most cavernous of rooms – and scarily it’s not even the most powerful model in the range.

Resist the urge to push the bass level up to 3 and you’ll enjoy seamless, non-directional bass that doesn’t sound boomy. Its natural agility and seamless integration keeps your eyes on the action, not the bass controls.

Moving up to the midrange, the DM55 keeps the drama levels high with its fast, attacking tone. Lightsaber fights are exhilarating, giving out a fierce crackle when the blades clash,  but it doesn’t turn spiky when you crank up the volume.

The Canton is crisp and articulate, projecting effects and dialogue with confidence. Chaotic scenes don’t turn into a muddy mess; effects are separated and organised within its expansive stage. Voice mode helps you pick out dialogue amid all the booms and bangs and works particularly well when watching TV.

But the clincher is the DM55’s silky, subtle high-frequency performance. Scenes on Jakku are characterised by a fine, precise rustling of sand, effortlessly tickled out by the Canton’s top-drawer tweeters. Voices are detailed and John Williams’ score has sumptuous texture and depth. It’s sublime.

Any flaws? As I noted with the DM100 it’s not quite as impressive at low volume levels. It can be a little hard to hear dialogue when the level dips below 55, but if you turn it up and a sudden explosion kicks in, you might get a shock. However, the disparity isn’t quite as pronounced as the DM100.

Another minor bum note is Surround mode, which does little to enhance your enjoyment, aside from a gentle widening of the soundstage. It’s fine but you lose the directness of Stereo mode.

Switch to stereo and the DM55 demonstrates rare musicality for a soundbase. The six-driver array gives you an expansive frequency range and a lovely tonal balance. Finesse, punch, engaging dynamics, it’s all there. And with the benefit of built-in Bluetooth, it’s really easy to experience it. 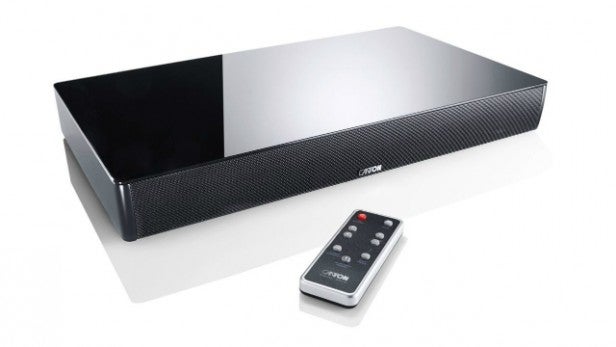 Should I buy the Canton DM55?

Silly question. With the DM55, Canton has created yet another top-drawer audio solution, blending a big, room-filling sound with the sort of finesse and subtlety more associated with home cinema separates. It’ll make you disgusted that you put up with your TV’s speakers for so long.

What’s more, design and build quality are superb, while the terrific remote and a smattering of new features make it a joy to use.

Only the lack of HDMI ports and less impressive low-volume performance blot the copybook; otherwise this is one of the best soundbases around, right up there with the Geneva Model Cinema and the Philips XS1.

The DM55 is yet another beautifully-built soundbase from Canton, which delivers sound quality to die for and some nifty new features.