What is the Canton DM5?

The Canton DM5 is a dinky soundbar aimed at boosting your TV’s sound without taking up loads of space. Its size makes it perfect for second-room TVs, but equally it will slot under your main screen to improve sound in small to medium-sized rooms too.

It’s the only soundbar in Canton’s otherwise soundbase-dominated lineup, but it offers the same level of plug-and-play simplicity. It also offers aptX Bluetooth for music playback and comes in a choice of black or silver glass-topped finishes. 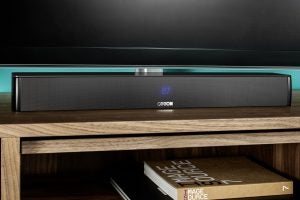 The DM5 measures 55cm wide and stands just 6.4cm tall, meaning it will slip beneath the majority of TVs without issue. In fact, with the Samsung QE55Q9C we tested it with, it nestled neatly into the middle of the V-shaped stand.

It’s capable of 120W of sound from a 2.1ch configuration (made up of two woofers and four mid-range drivers), which is pretty decent for a small bar. Of course, you’ll get more if you opt for one with a separate sub. However, much of the DM5’s charm lies in it being so easy to accommodate – particularly in smaller rooms.

At 3kg, it has just enough heft to feel reassuringly weighty, and also to give it a quality feel. As well as the glass top, along the front of the unit you’ll find a metallic grille, an on/off LED light and a dot matrix-style display, which disappears when not in use.

The display is an excellent addition – one that many soundbars at this price go without – and makes setup easier, even if it’s limited in what it can show.

Three letters are use to represent each menu option, and you might need to refer to the manual the first few times to work out what they mean.

The included remote is well put together, and a little larger than you’d usually see at this level. It provides the usual volume and input controls, as well as buttons for Bluetooth pairing, a ‘Play Mode’ (a choice of surround sound or stereo) and EQ settings. Holding the latter two down will open up larger menus that provide access to some of the soundbar’s more in-depth features, which I’ll discuss in the next section.

For that reason, it would be wise to keep the Canton remote handy for when you need to dig a little deeper. However, I found I was able to adjust the volume on the DM5 with my TV remote, without any extra programming.

Connections sit behind a cover on the DM5’s rear, offering a choice of optical, coaxial or analogue, plus a subwoofer input should you wish to add one for extra oomph. As is often the case with soundbars at this price, there’s no HDMI input, which will limit your ability to get higher-resolution soundtracks such as Dolby TrueHD and DTS-HD Master Audio from Blu-ray. 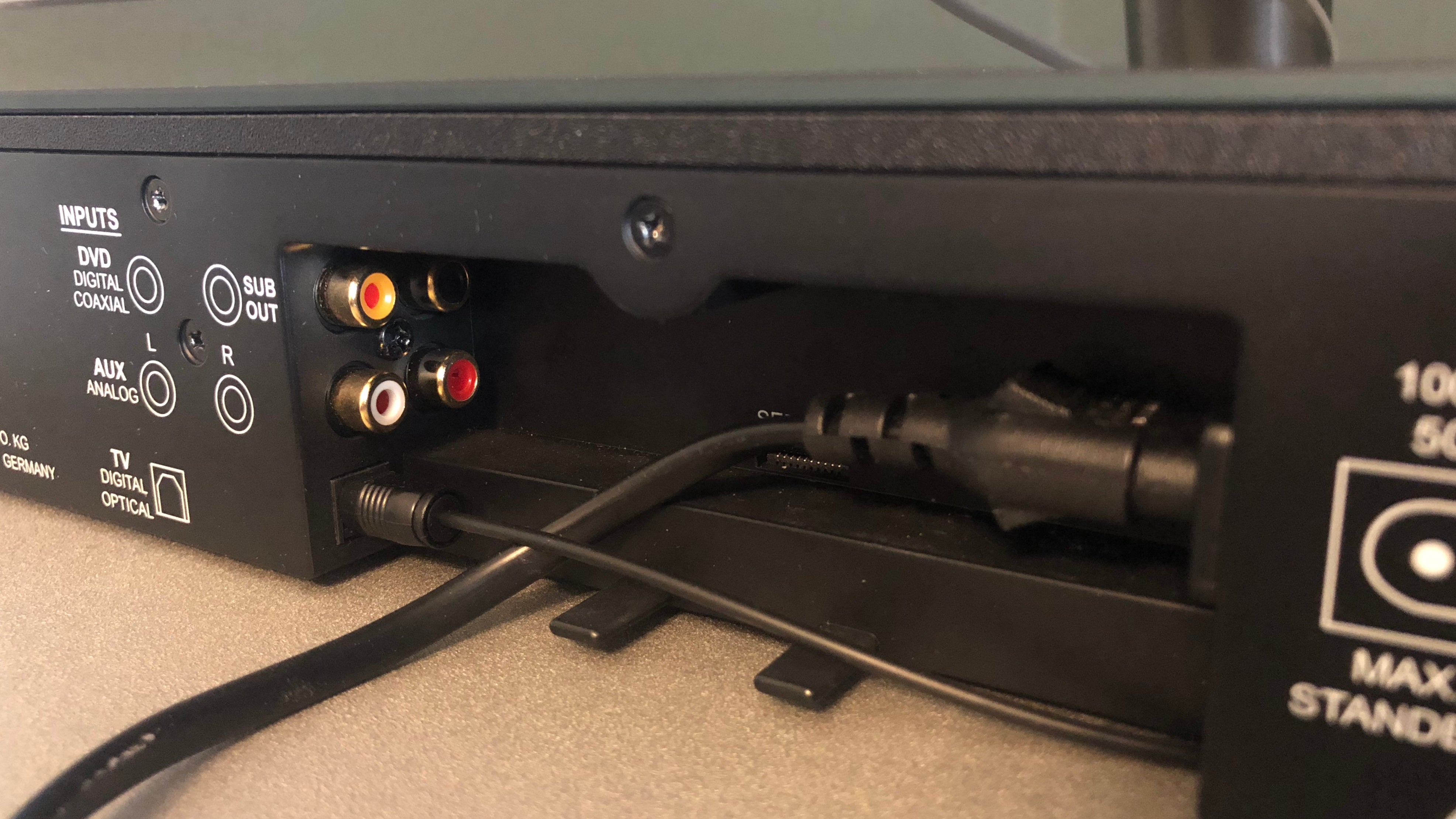 The DM5 is fairly straightforward in its functionality – there aren’t a whole load of options you need to work through to get it sounding its best. However, as I mentioned, there are some hidden extended menus that are worth exploring.

Hold down the Play Mode button and you’ll find extra setup options. These include ‘AUT’, which will set the bar to turn on and off with the TV (as long as you’re connected via optical or coaxial), ‘ECO’ for an eco standby mode when the bar hasn’t been in use for a period of time, and ‘SEL’ to activate or deactivate the automatic Bluetooth selection.

Having this switched on will allow the bar to shift to the Bluetooth input automatically when it knows you’re trying to send music to the bar. Just be sure to disconnect it when you’re done. I manually switched inputs back to the TV, which kept the Bluetooth connection open. This meant that when I played a video on my phone later, the bar automatically switched back to Bluetooth to play the audio. It did this to even play the shutter sound of my camera when taking a photo!

Hidden behind the Sound button, you’ll find options for lip-sync controls (I had no need for these when connected via optical), Dolby’s dynamic range compression for equalling out soundtracks (I prefer to keep this switched off), and an EQ mode that you set depending on where the bar is placed: wall-mounted, in front of the TV, or beneath it on a rack.

You can also switch the sub output on or off, there’s a volume limiter for stopping kids from whacking the sound up to max, and a voice sound setting for boosting dialogue.

Once you’ve set these to your preferences, you’re unlikely to need to change them again – but do keep the remote handy for flicking between surround and stereo when you’re listening to music. 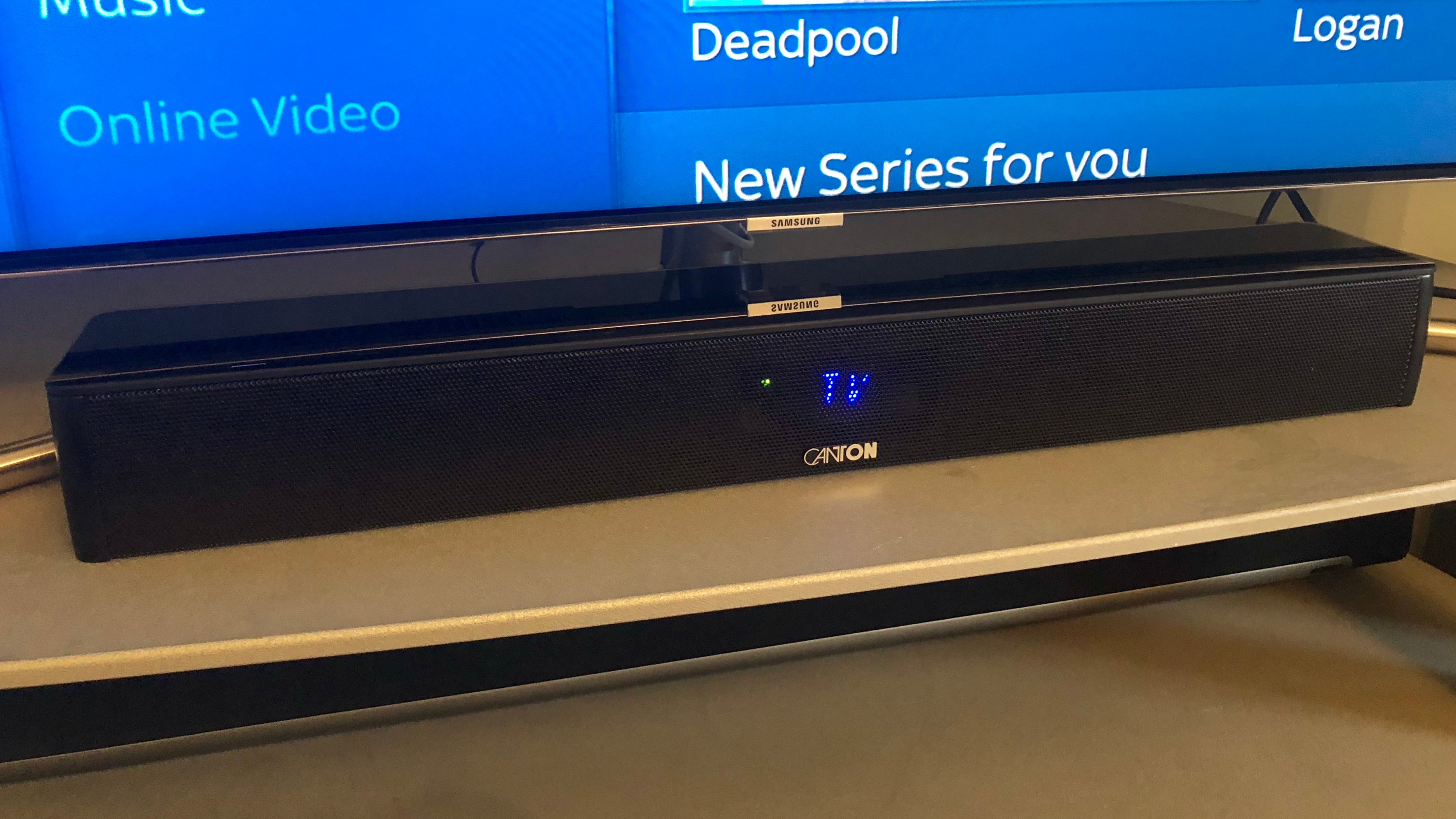 One thing is for sure: the DM5 is capable of producing a pretty expansive sound for its size.

It doesn’t sound pushed either, thanks to good-quality drivers; it projected well into my medium-sized living room. I find the volume needs to be up at around 75 or so (out of 100) for regular TV watching, however, and at 90 for films. As such, there isn’t a whole lot of room to spare if your ears can take more – but at least the volume is usable all the way up to the maximum.

At this price most folk will be looking for a decent, convenient improvement on their TV’s sound, rather than unit that’s overly cinematic – and you certainly get that with the DM5. This device sounds solid and authoritative, and shows none of the thin, fragile sound that often emanates from your TV.

However, in ensuring that, Canton has probably put a touch too much weight into the DM5’s balance. Voices – in particular, low male voices – can sound a little thick and lacking in definition, and the mid-range in general could do with a little more clarity to be more insightful.

That’s not to say the low end is boomy or out of control, however; there’s just plenty of it. It won’t go as deep or sound as defined as the bass you’d get from a separate sub, of course – but it remains capable of a pretty impressive rumble for an all-in-one soundbar of its size.

That said, the tendency to lean towards the low-end does mean that in action scenes dialogue can become lost in the commotion. I found the voice mode helped in pushing it forward, and I’d recommend switching it on from the get-go.

Treble and bass EQ controls are there for the tweaking, but I couldn’t achieve a happy balance that was better than them in neutral. A touch more bite to the treble wouldn’t go amiss, though.

As for dynamics, the DM5 does a convincing job of shifting between loud and soft at the drop of a hat, which works well for big action scenes and building tension through soundtracks. Of course, you’ll want to ensure you’ve turned off dynamic range compression to hear the soundtrack as it was intended.

Not surprisingly, play some music via Bluetooth and many of the DM5’s sound characteristics remain the same. It displays plenty of confidence, and will double as a great party speaker that suffers no shortage of drive.

It won’t do big orchestral numbers the most justice, but the majority of other genres will play comfortably with the DM5’s balance. It’s lacking fine detail of they type a critical ear will crave, but for casual listeners the DM5 produces fun, upfront sound with plenty of oomph in the low end. Just make sure you switch from surround to stereo on the remote for a more focused performance. 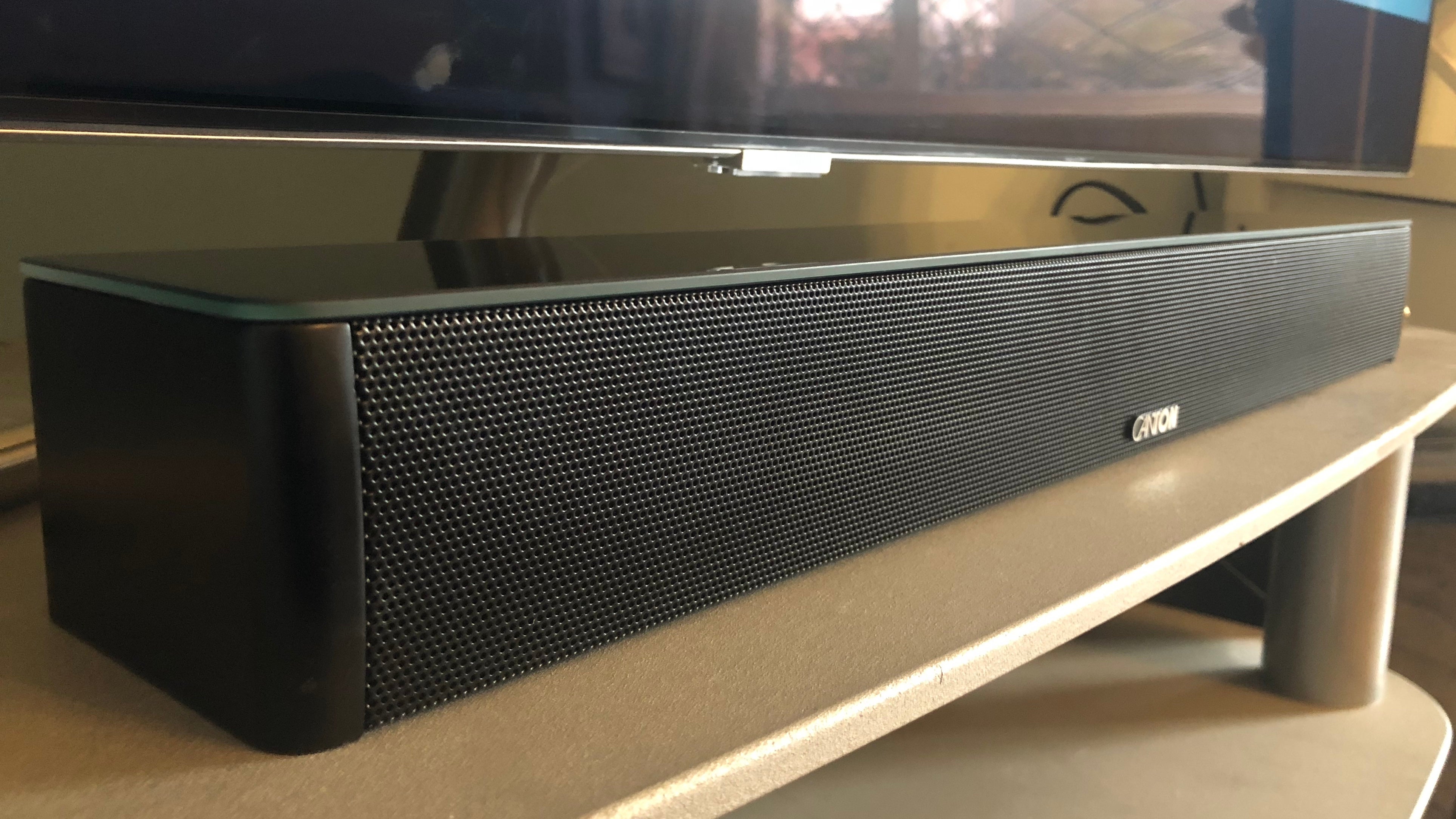 Why buy the Canton DM5?

If you’re short on space and want to boost your TV’s sound without spending big, the DM5 is certainly a soundbar to consider.

For its size, it’s capable of a large, expansive sound, which will put the performance of your TV’s speakers to shame. Its impressive low-end provides punch to action scenes, not to mention the fact it doubles as a pretty ballsy Bluetooth speaker.

That said, there could be a touch more clarity and detail in the mid-range, plus there could be more bite to treble in order to make it as expressive as it is authoritative.

But if it’s muscle you’re after, the DM5 will deliver it by the bucketload.

A small all-in-one soundbar with plenty of heart; perfect for second room TVs or those short on space.