Canopus is an usual company. Back in 1997, it was known to the gaming cognoscenti as a purveyor of the fastest 3dfx Voodoo Graphics cards around, which had 6MB of memory instead of the usual 4MB. But since then Canopus has completely changed direction. It is now one of the most respected purveyors of fast real-time video editing products instead. In fact, it is now so respected in this area that video product mega-corporation Thomson-Grass Valley bought the company at the end of 2005.


So Canopus is the new kid on the block which is fast making a name for itself, and central to that is EDIUS. Despite already being on version 4, EDIUS has only been around a few years. But it is rapidly accruing features, and with this new version it now claims to offer most of the same abilities as the Adobe and Avid competition. Since version 2, EDIUS has held the crown for offering the fastest real-time video mixing ability of any app. So in the third and final part of our tour of the semi-professional video editing options, we take a look at the just released EDIUS Pro 4.


On first loading, EDIUS Pro 4 doesn’t look that different from its predecessor. The most major (and very welcome) addition with this version is a traditional menu system, which helps you find a lot of features which were hidden behind icons before. Despite this, the interface still behaves a little unlike some other non-linear editors (NLEs), and is designed to be used with a dual-monitor setup. So it feels slightly cramped even on a 1,600 x 1,200 screen. Some of the palettes tend to overlap, as you’re meant to drag these to the second desktop, leaving the main one just for the timeline and preview windows. It has a few other quirks, too, which we will mention later on. But otherwise it follows a similar timeline arrangement to Adobe Premiere Pro and Avid Liquid.

Capturing DV or HDV is pretty seamless, and works with any OHCI FireWire adapter. However, while DV footage is essentially left in its native format, HDV is transcoded on the fly to Canopus’ HQ codec. This proprietary format uses a higher data rate than HDV and better-quality colour sampling. EDIUS is optimised to work with the format, too, so it potentially offers faster, higher-quality editing than native HDV. But Canopus’ use of its HQ codec has another advantage, too. Unlike Matrox’s RT.X2, which is limited to HDV’s 1,440 x 1,080, EDIUS Pro 4 can edit in full 1,920 x 1,080 using HQ, although you can’t capture at this resolution. On the downside, even with the NX hardware (see below) you can’t capture from component sources. For this you need the £2,500+ EDIUS SP hardware instead.

As we explained in the introduction to this review, EDIUS’ party piece is its real-time editing prowess. Even in software-only guise, it compares very favourably with the competition. In our dual 2GHz Opteron 246 workstation, we were able to mix around five streams of DV in real time. The system could handle two streams of HD with a 3D picture-in-picture effect and filters applied, and even three streams over short periods. Canopus has a unique ability to allow short sequences beyond your PC’s real-time abilities, too. It can cache up to 96 frames in memory, and use these to get it through processor-intensive areas.


Despite looking virtually the same as its predecessor, EDIUS Pro 4 has a number of brand new features, which bring it more in line with the Adobe and Avid competition. Multicam editing has been added, with up to eight camera angles. This is a separate mode, which allows you to sync your clips and switch between angles during real-time playback. Related to this is the new ability to nest sequences – which will handily allow you to nest a multicam edit within a normal one. Each sequence is tabbed along the top of the timeline, like Premiere Pro, and can be dragged into another sequence, where you can apply any effects you like just like a regular video clip. Playback will even be in real time, if hardware power permits. 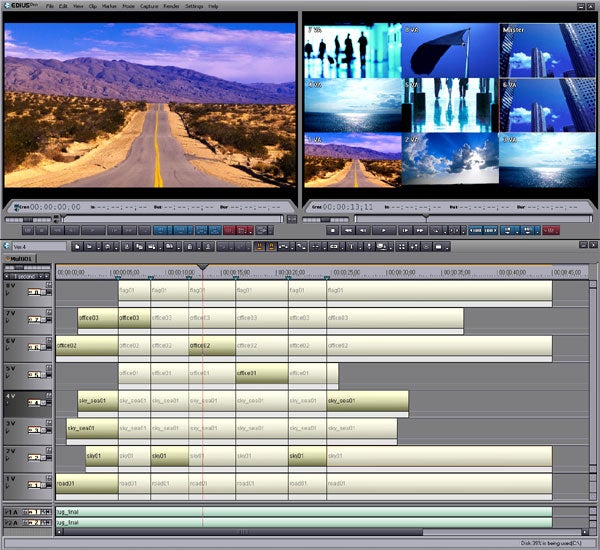 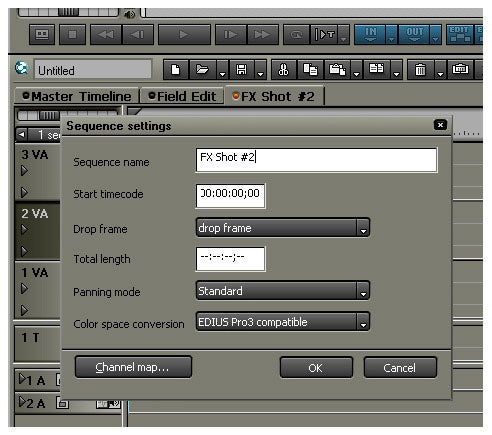 The most exciting new effect is Time Remapping. This is akin to Avid Liquid’s Linear Time Warp. It allows you to vary a clip’s playback speed dynamically with time, speeding it up in some places and slowing it down in others. This is an effect much loved in advertising, and Canopus makes it relatively easy to use once you know how the keyframes work. The Time Remapping has the unique ability of being able to change playback speed without altering the length of the clip. It works in real time, too, unlike Avid’s Linear Time Warp.

There are also sundry additional capabilities. You can now import and edit WMV, including WMVHD. Dolby Digital audio can be imported and edited, too, which is handy if you have a camcorder which records its sound in this format, such as JVC’s Everios. The Speed Encoder is also now included for free. This takes advantage of multiple CPUs and/or cores when encoding HDV from the timeline ready for output back to tape. We’ve already mentioned the ability to edit video at 1,920 x 1,080. This was new with EDIUS 4 as well.


However, one feature which we were expecting in this version is noticeable by its absence – filter keyframing. The colour correction filters have had this facility added, but most of the others are still static, forcing you to use the same settings throughout the clip. This somewhat hampers creativity, considering even sub-£100 editing software offers this ability these days. 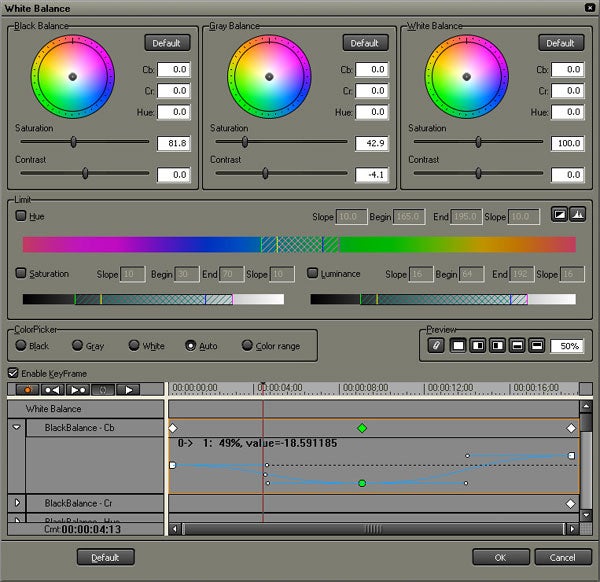 We have focused on the strengths of the EDIUS Pro 4 software on its own for this review, since this provides your main editing interface. But you’re just as likely to buy it with one of Canopus’ hardware products. The cheapest is the DVX PCI card, which costs £410.08 but only supports editing DV, not HDV. It offers a FireWire interface and analogue S-Video and composite outputs, plus plug-ins for Adobe Premiere 6.5 and Premiere Pro, should you want to use these instead.


But if you want HDV editing support, you will need the next step up: EDIUS NX. This now comes in two versions, one with a 64-bit PCI-X interface and one with a x1 PCI Express interface. They have identical capabilities, and cost virtually the same, so the choice comes down to which type of slots your PC has on offer. The 64-bit PCI-X card will work in a regular 32-bit PCI slot, but loses some of its HDV acceleration capabilities. 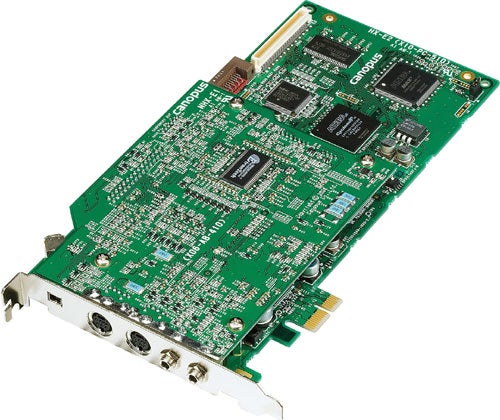 On the face of it, the NX hardware is simply an I/O card. It offers a FireWire port, plus composite and S-video capture and output alongside mini-jack audio. A handy breakout box which fits in a 5.25in drive bay is available for £104.58 inc VAT, or you can add component output as well for previewing HD via the HDV Expansion Kit (£504.08 inc VAT). This includes the breakout box, a PCI component I/O card, Title Motion Pro titler software and codecs for editing HDV natively. 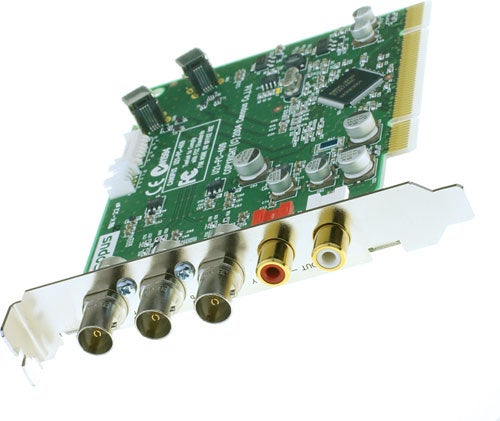 But the NX hardware is a little more than just for analogue digitisation. It also includes a hardware DV encoding chip, and hardware video overlay support for both DV and HDV (although the latter doesn’t work when using the PCI-X card in a 32-bit slot). We’ve found that having the NX hardware installed does noticeably improve on the real-time editing capabilities. Even without NX, EDIUS is capable of real-time DV output over FireWire from the timeline, but with the additional hardware you can add a layer or two more than with just OHCI FireWire. Likewise, HD playback works in real time for that little bit longer with the NX hardware, although it’s hard to quantify exactly how much better it is.


At the time of writing, all these hardware products were still shipping with EDIUS Pro 3, but you can upgrade to version 4 for free. This makes the DVX actually cheaper than buying EDIUS Pro 4 on its own!

Matrox’s RT.X2 is now offering stiff competition for EDIUS in its traditional area of strength – real-time effects. But Canopus can still claim about the best software-only real-time editing, considering its less high-end system requirements. EDIUS Pro 4 has added some useful features, too, which make it almost as capable an NLE as competitors which are much more mature. After all, Avid Liquid is on version 7 and Adobe Premiere Pro 2 is essentially the eighth version of Premiere.


On the downside, Canopus’ NX hardware does lack one or two of the features found in the Matrox RT.X2, or the Avid Liquid Pro 7 breakout box. In particular, there is no facility to capture from component sources. Likewise, it’s also rather surprising that filter keyframing has only been added to colour correction in EDIUS Pro 4, and not the full gamut of effects. On a more prosaic note, EDIUS has great encoding abilities available via the bundled ProCoder Express, but no disc authoring. This makes Avid Liquid 7 the more comprehensive all-round package.


But nevertheless, Canopus has achieved a capable, stable editing platform with EDIUS, which improves in leaps and bounds with each new version. Just the software on its own offers great real-time editing, and adding the NX hardware provides even more functions, although you need the HDV Expansion Kit to make the most of it. Since that is available as a bundle with the card for around the same price as Matrox’s RT.X2, it’s a tough choice. The Matrox product wins on component capture and Adobe Premiere Pro 2’s general usability. But EDIUS NX will give you more in real time on a cheaper PC.