Like a lot of instant cameras, the Canon Zoemini S puts fun ahead of image quality and features. It might not have the charm of a true instant, printing its photos rather than developing them, but the effective ring flash and smartphone controls can still let you capture the moment. The lack of screen and inability to take a photo without also printing it means it isn't quite as flexible as other, more well-equipped hybrids such as the Fujifilm Instax SQ20, but it's also small enough to fit in a pocket – something few of its pricier rivals can claim. Picture resolution is also a step up from the cheaper Polaroid Snap Touch. If you're after a pocket-size camera that can take quick pics and put a physical photo in your hand seconds later, and don't mind missing out on a few extras, this is a safe, if a little basic, bet.

Canon is one of the biggest names in digital cameras, but it’s something of a small fry when it comes to instant ones.

Now that instant photography is going through something of a revival, the Zoemini S (also known as the IVY Cliq+ in North America) has arrived to muscle in on Fuji’s long-established Instax and a recently-revived Polaroid. This is a hybrid rather than a true instant camera, with a digital sensor and 2x3in Zero Ink (Zink) printed images, rather than light-exposed snaps that develop over time. Bluetooth and a smartphone companion app lets it double as a portable printer when you don’t have anything new to snap, and a built-in ring flash should make for more flattering portraits.

Just keep in mind that this is one of the more basic instant hybrids – so while size may be on its side, its feature list isn’t quite as extensive as rivals like the Fujifilm Instax SQ20.

There’s no denying the Zoemini S is a very compact camera. It’s roughly the same size as a typical smartphone battery pack, so should easily slip inside your pocket.

At a little under 200g, even with a tray full of Zink paper, it’s also very light, with an entirely plastic construction, although the gloss finish on the front and textured effect on the paper tray add a more premium feel.

That tray simply slides off with pressure; there are no hinges or paper feeding mechanisms to jam, but it does hint that Canon made the Zoemini to a budget. You don’t even get a tripod thread on the bottom of the camera, just a microUSB charging port and microSD card slot. Unfortunately, there’s no tripod thread on the underside of the Canon Zoemini S, but you do get a microUSB charging port and microSD card slot

Add a microSD card and the camera will create a digital copy of every photo you take. Unfortunately you can’t keep snapping once you’ve run out of paper – even with a card inserted, the camera refuses to function until you add another pack of Zink paper. Photos eject, slowly, from the left side of the camera.

Images are saved at 8-megapixels, which is roughly on par with a two- to three-year old smartphone. There’s no way to preview them, as there’s no built-in screen – just an optical viewfinder with guidelines for the various aspect ratios. 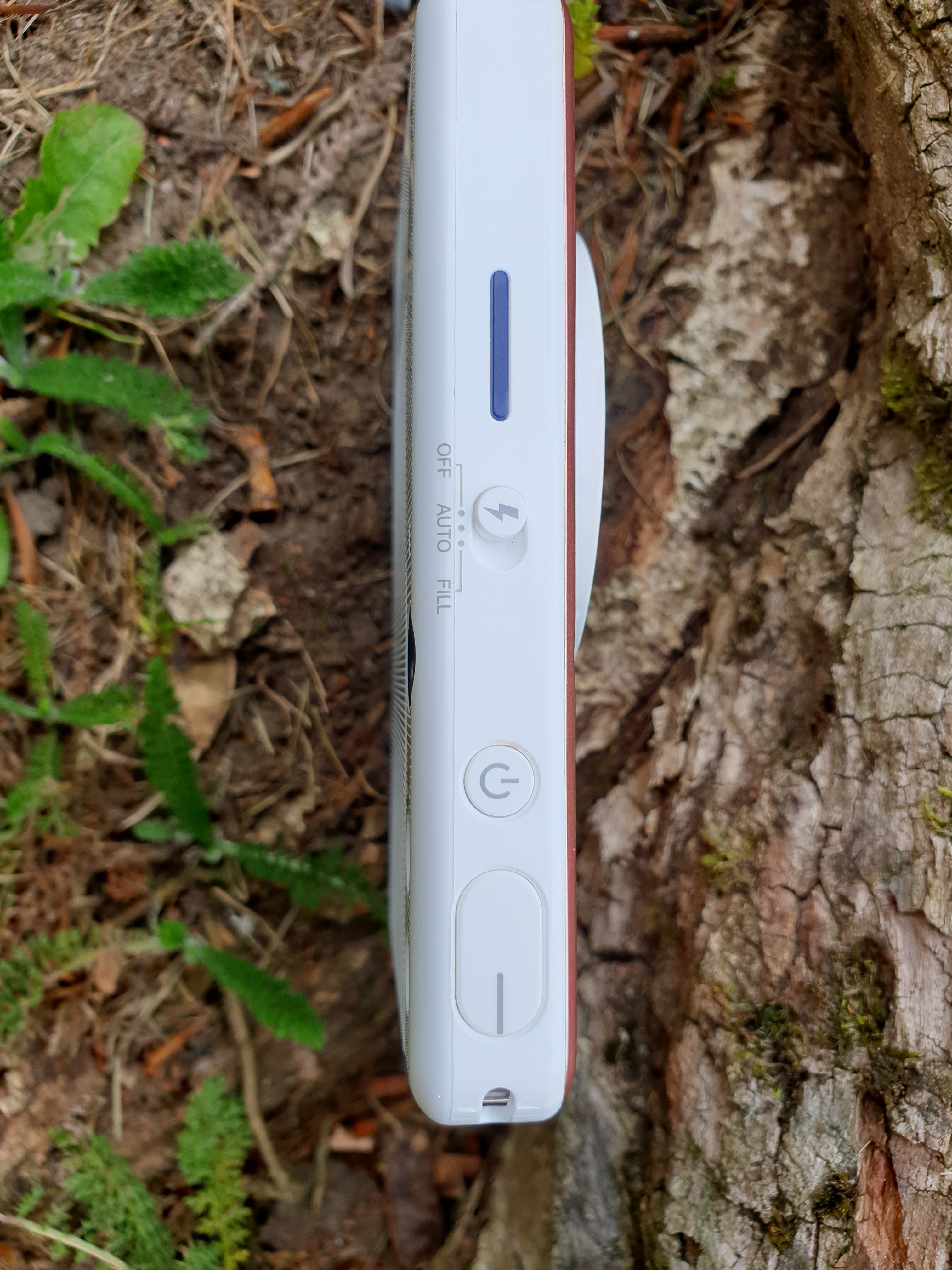 The Zoemini S is very simple, with only a handful of buttons, although the reprint function could be clearer – in a digital camera, that icon would open a picture gallery for reviewing the photos you’ve already taken

There are really only a handful of controls, including the power and shutter buttons, a slider to control the built-in flash, and two toggles at the rear for swapping aspect ratio and for reprinting the last photo taken, in case you want to share it with a few friends.

There’s no dedicated button to enable it, but the Zoemini S also has stealthy Bluetooth support. Pair a smartphone and you can control the camera remotely using a companion app, or send photos to be printed straight from your phone. 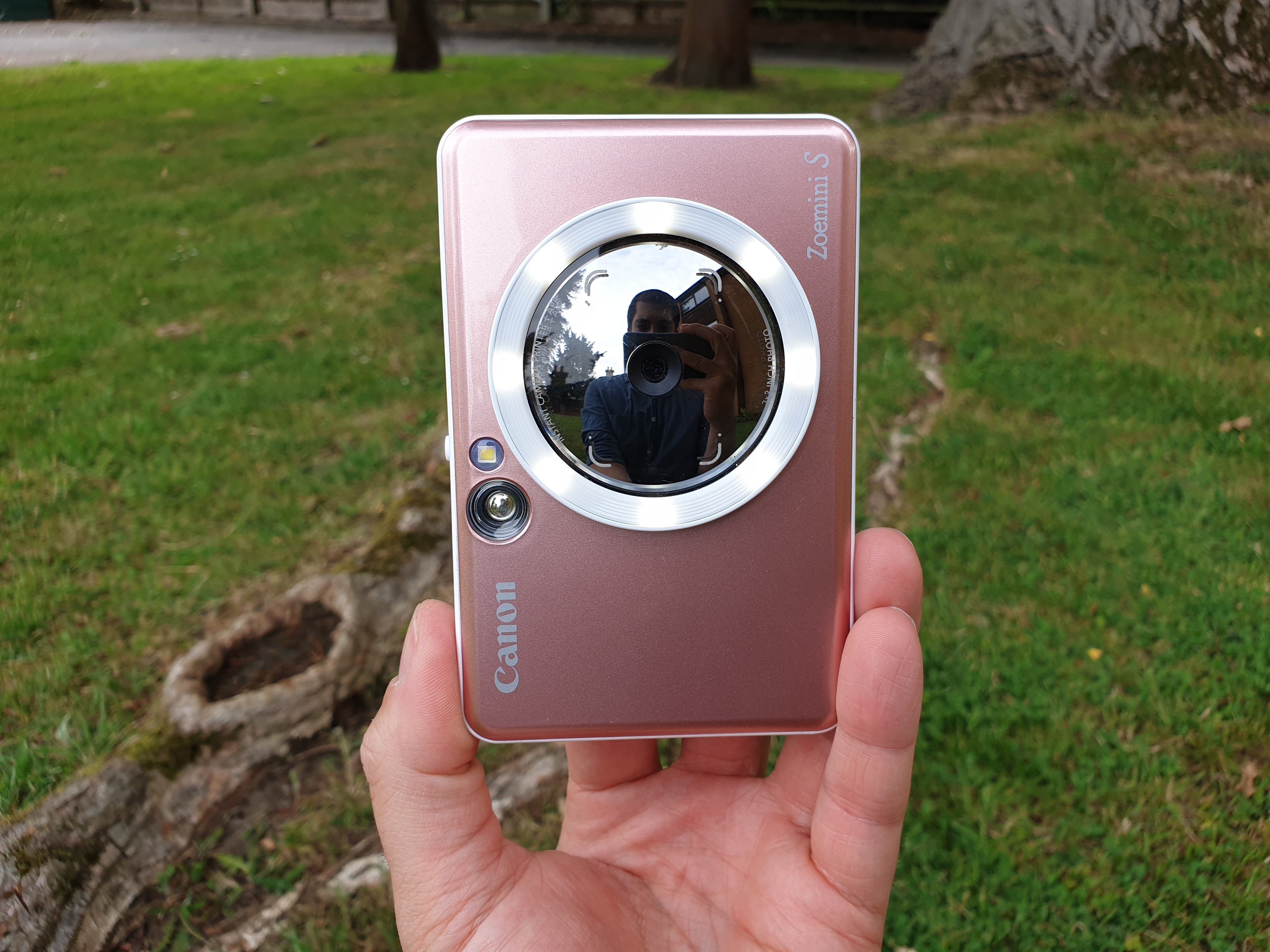 The eight LEDs surrounding the lens barrel create more flattering lighting for portraits, but it works best indoors – outside it can over-expose faces, smoothing out features and losing fine detail – not a bad thing if you like a bit of post-processing, though

The mirrored lens barrel is the most obvious difference between this camera and the less expensive Zoemini C. It’s ideally placed for framing selfies, and is surrounded by an eight LED ring flash. This might not be as effective as the kind you’d bolt onto a digital SLR, but it can still create more evenly lit portraits and more flattering reflections.

Image quality and performance: the Zoemini’s fun-size prints are a step above other zero-ink instants – but it’s no Instax

It didn’t need to produce professional-grade images, as part of the charm of instant photography is its lo-fi nature, but the Zoemini S’s Zink prints are a small step up from the similarly-priced Polaroid Snap Touch. Details are more defined, and images overall looked sharper. It might have a lower pixel count than the similarly-priced Polaroid Snap Touch, but the Zoemini produces sharper, more detailed images with its 8MP sensor

Basic autofocus, auto exposure, white balance and auto sensitivity are all performed in-camera, helping the Zoemini to deal with a wider range of lighting conditions than an equivalent Fuji Instax camera. That’s handy, as there are no manual exposure controls. Well-lit scenes with colourful subjects have the biggest impact, but the Zoemini has a tendency to underexpose its images – a lot of our test photos appeared dark and contrast-heavy, but without the punchy and vibrant colours seen in other kinds of instant film

Zink prints aren’t as punchy or contrast-heavy as an Instax print, and as a result can look a little dull when placed side-by-side, but it has its advantages. Each print is larger than an Instax Mini photo, and completely fills the frame. You can peel the back off each photo and use it as a sticker, and packs of paper are cheaper: around 50p a print versus 80p for Fuji’s Instax Mini.

Less impressive is the 2×2 aspect ratio mode, which we expected to replicate the border of Polaroid’s classic instant photos. Instead it merely fills two-thirds of the print, leaving the bottom third blank. In this mode photos simply aren’t as easy on the eye as an Instax print. 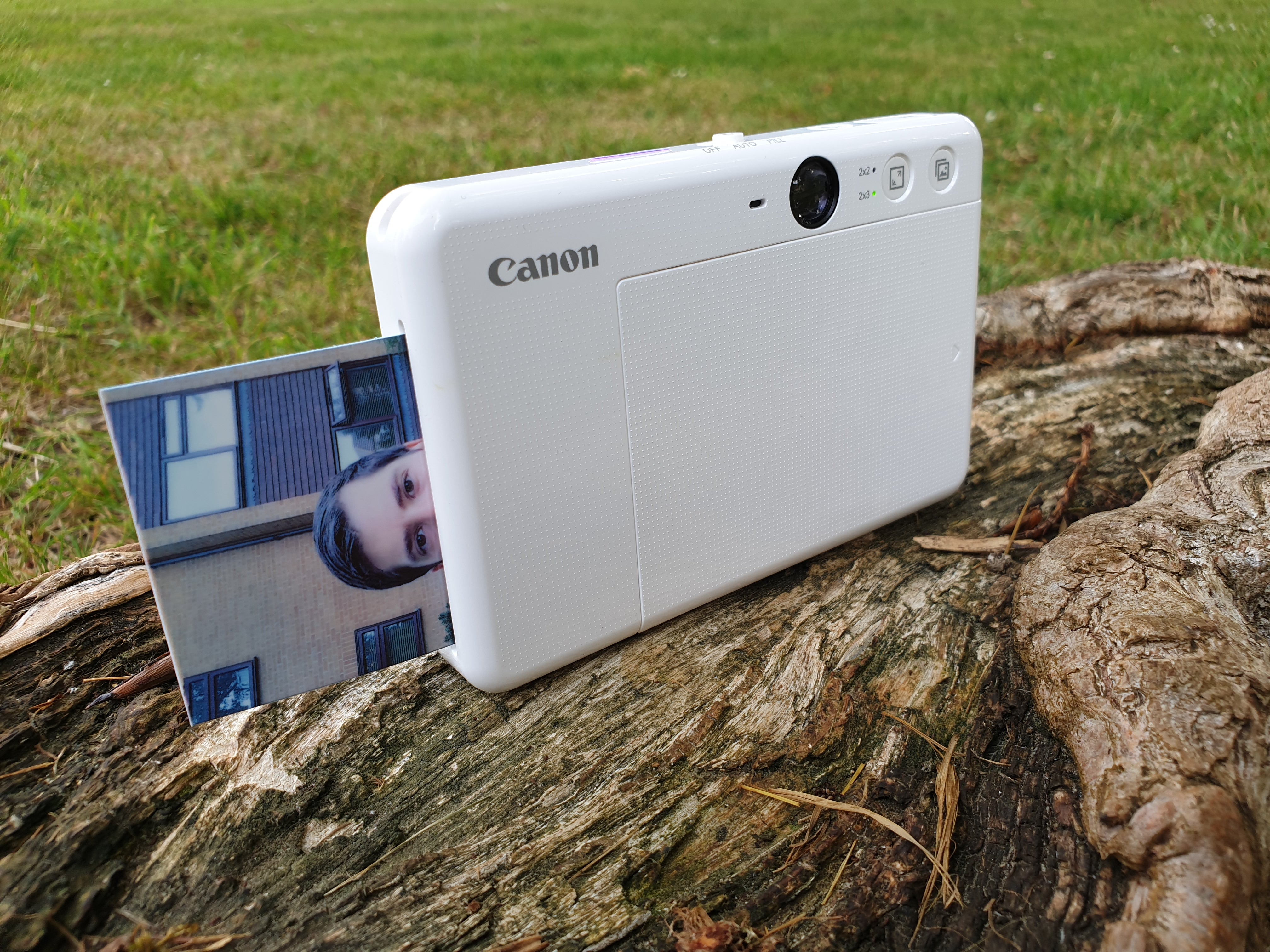 Each print takes around 30 seconds to process, but is fully exposed once it exits the camera – there’s no waiting around for your pictures to develop like there is with Instax or Polaroid prints

8-megapixel digital files saved to an SD card are about on par with a smartphone from a few years ago, with an absence of detail compared to today’s flagship phones, but sharp enough across the whole image and largely accurately exposed. The small sensor can quickly fall foul of low light scenes, though, with noise creeping up very quickly.

Should I buy the Canon Zoemini S?

If you want an instant camera you can take anywhere, they don’t really get much smaller than the Zoemini S. It gets the basics right, has a handy ring flash and enough battery life to get through two packs of film – which is usually plenty.

The Zeroink photos it prints are cheap enough, but aren’t truly ‘instant’. The larger Fujifilm Instax Mini 70 does a better job of recreating the instant experience, and while we have yet to test it, the Fujifilm Instax Mini LiPlay promises to do much of the same in a more compact body.