Five years ago there were three or four manufacturers who could supply you with a dye sublimation photo printer. Now there’s effectively just Canon, but the company has matured the technology to a state where, in the SELPHY CP900, it just works. It has also added in modern necessities, such as wireless print direct from phones and tablets.

The Canon SELPHY CP900 is a small black box, about the size of two routers laid one on top of the other. There’s a 68mm LCD display set into the top panel, which hinges up to a convenient angle when in use. The simple control panel in front of the LCD display contains eight buttons and a four-way navigation control. 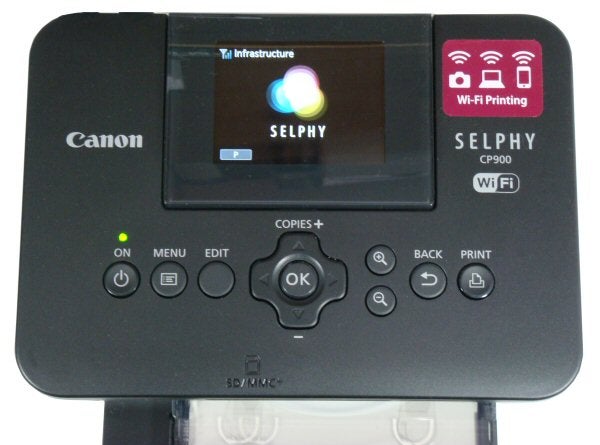 In the front panel is a single SD card slot and a flip-down cover which enables the insertion of an 18-sheet paper cassette. This cassette is a fairly awkward design, as it effectively triples the depth of the machine and, if you want to take the printer with you, both the cassette and a bulky in-line power supply have to accompany it. The printer can work from a rechargeable battery, but neither battery nor charger are supplied as standard.

Set into the left-hand side are a microUSB PC connection socket, as well as a standard-sized one for a USB drive or a Pictbridge camera. At the back is a socket for the power supply and, in the right side panel, another flip-down cover gives access to the ink film cartridge.

Dye sublimation print doesn’t use liquid or powdered ink, but instead transfers minute amounts of solid dye from a coated film to the paper. The Canon SELPHY CP900 uses a small cassette, where the film is coated in bands or yellow, magenta, cyan and a transparent protective layer. 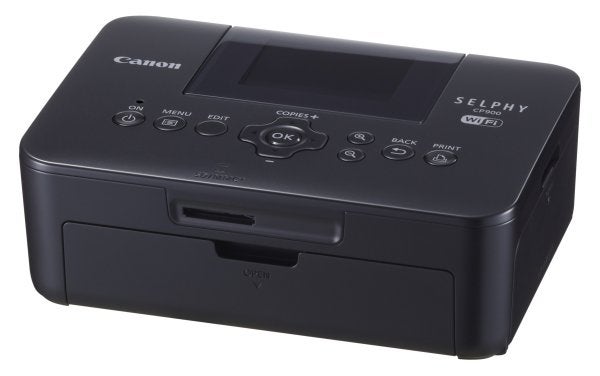 The cassette has sufficient bands of dye to print the 36 photo sheets supplied in a pack. It slides into the printer from the side and can be replaced in a few seconds. As well as postcard media, you can get credit card-sized paper and stickers and small square stickers to work with the machine.

The printer is designed primarily for wireless connection, and both push button and PIN versions of WPS setup are available, though we had repeated problems connecting via the simpler, push-button option, where the display reported a failed connection. We had no trouble entering a passcode from the control panel, though.

PC and Mac software is provided, including a driver and Canon’s SELPHY Photo Print, which provides basic print tools.

Next
Peformance and Verdict Review