The dye sublimation technology Canon uses in its Selphy range of printers is now mature, so to keep sales buoyant the company has to update other aspects of its dedicated photo devices. The Selphy CP760 is close to the entry-level device in Canon’s new range, but still provides most of the features seen in its more expensive siblings.


It’s simple, rounded lines, finished in pure white with colour accents on the control buttons, mean it can fit in a living room as well as a study. In fact, it will probably be used as a standalone printer as often as a PC-connected one.


The most obvious feature in its top panel is the 63mm colour LCD panel, deep-set into the surface and slightly angled for easier viewing. This is complemented by the usual diamond of control buttons, with just four others for power, menu, back-out and print. 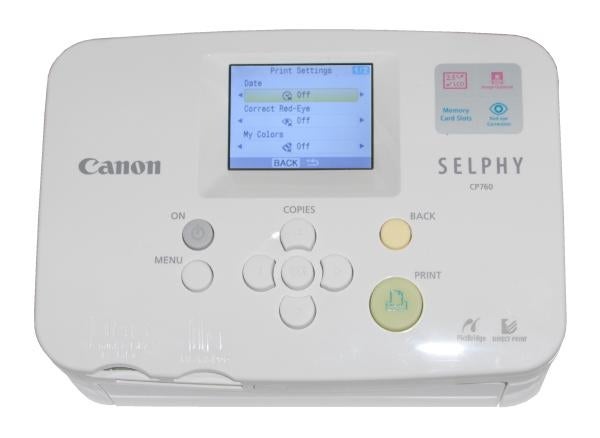 The main features in its front edge are three memory card slots, which take SD, memory stick and CompactFlash, though support for Fujifilm’s xD format requires an optional adapter. On the left-hand side are sockets for a PC connection and for a PictBridge cable from a camera.


The right-hand side has a flip-down cover concealing the film cartridge, which is the only consumable in the machine, apart from paper. A similar cover slips down from the front so you can engage the paper cassette, which nearly doubles the footprint of the printer, when in place. As with previous Selphy printers, there’s no convenient way to carry this cassette.


If you intend to use the CP760 to print from memory cards or a camera, the only installation required is to slot in the film cartridge, load the 15 by 10cm paper blanks into the cassette and plug the cassette into the front of the printer. Power is supplied from a separate ‘black block’ power supply, though in Canon’s case it is white, to match the printer.


Canon supplied us with an early evaluation sample of the printer, which came with no software CD, but the company confirmed it will normally be supplied with copies of Ulead Photo Express LE for photo editing, with Canon’s own ZoomBrowser EX doing the photo housekeeping. This effective partnership has been seen before in previous Selphy printers.


Canon claims to have improved the firmware in the printer, to automatically detect faces and correct their brightness. You can also remove red-eye without having to use a PC.

The Selphy CP760’s footprint is not just increased by the size of its paper cassette as, in common with other Selphy printers, it feeds the paper out of a slot in its back, and then forward out of its front, four times during the printing process. With each pass a different colour is laid down and after cyan, magenta and yellow layers have been added, the print is covered with a clear, protective coating.


Despite this four-pass technique, we produced prints from an SD card in 1 minute 16 seconds and from a PictBridge camera in 1 minute 4 seconds. Both these times are very respectable and there’s still something magical in seeing the picture build up, colour by colour.


The resulting prints have excellent colour depth, with darker hues looking rich and vibrant and paler ones being natural and delicate. The dye sublimation technology means prints show no visible dot patterns, even under a magnifying glass, and look, to all intents and purposes, like traditional, silver halide photographic prints. 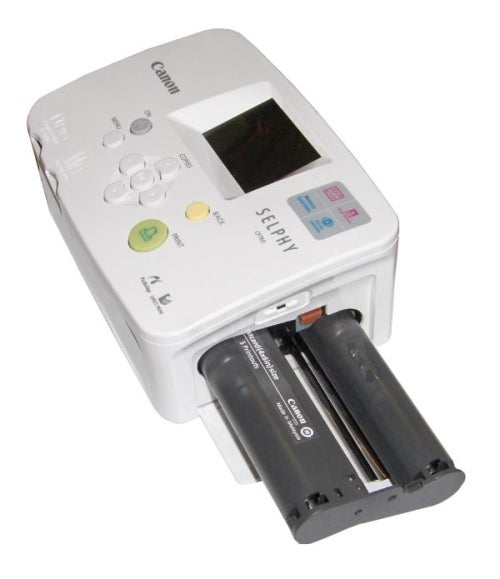 Another advantage of dye sublimation is that it’s a dry process, so when prints emerge they are ready to be viewed or stuck in an album, immediately. You do have to tear off the micro-perforated end tabs of each print, though.


You’re going to need to invest in consumables for your new Selphy CP760 almost as soon as you buy one, as the film cartridge and paper Canon supplies is only enough for five prints. Film and paper blanks are available in 36, 72 and 108 print packs and, although the printer is new, it shares these consumables with other Selphy models, so they’re already readily available.


As with most consumables, the more you buy at once, the more economical the cost. We based our calculations on the price of the 108 print pack, which we found for under £20. It gives a cost per print of 18p, 2.5p more than from the Selphy ES20 we reviewed recently and 3.5p more than both the HP Photosmart A826 and the Epson PictureMate PM290. If you can find the Canon consumables cheaper than we did, of course, it will have a direct bearing on the print cost.


It’s pretty much more of the same with the Selphy CP760. It works in the same way as previous machines and while the case makeover is a definite improvement, there’s little fundamentally new in this machine. The price has come down, though, giving you the chance to produce very high quality photo prints for well under £100.